I recently acquired a Dell Dimension V333c, a 333MHz Slot 1 Celeron based system. The problem I've found is that it uses a PSU with a sort of half AT motherboard connector design that connects alongside the standard 20-pin ATX connector. The second problem is that the PSU in question is toasted (though it did come with it- model number of the PSU is PS-5201-7D). The system won't even so much as spin the fans without that extra connector hooked up, it seems. Are there any options for me to jerryrig a solution using spare parts or will I have to go out and buy the same model of PSU on eBay?

The cable that the PSU itself uses to interface with this fully standard and not dumb at all connector design is the weird AT looking thing with the blue and black wires:

Also, if somebody can give me a valid reason as to why they would use such a strange design, please do inform me. I'd be intrigued to find out because I have no idea why they would do this- there doesn't appear to be anything extra on the motherboard that would require the extra oomph in electricity.

I've tested the CPU, changed out its thermal paste, cleaned out the case entirely, and tested the HDD in it, but I can't test the motherboard because of that moronic connector. If I was an idiot I'd just hook up an ATX PSU to it and then grab my single (I have no others) AT PSU and hook the connector with the matching keying into that slot, turn both PSUs on and blow the thing up.

Unfortunately the ATX connector is also proprietary when it comes to the pinout. Dell did this in the late 90's. On the intel version of that board the connector would be shifted to the left on those six empty solder pads. It's my understanding that powering up this board with a standard ATX PSU connected can fry the motherboard. You can buy adapters for standard ATX to dell pinout, but it may be too late if it's been tested with a standard ATX PSU. 😢

Note the shifted ATX connector and absent AT connector on this intel SE440BX board. 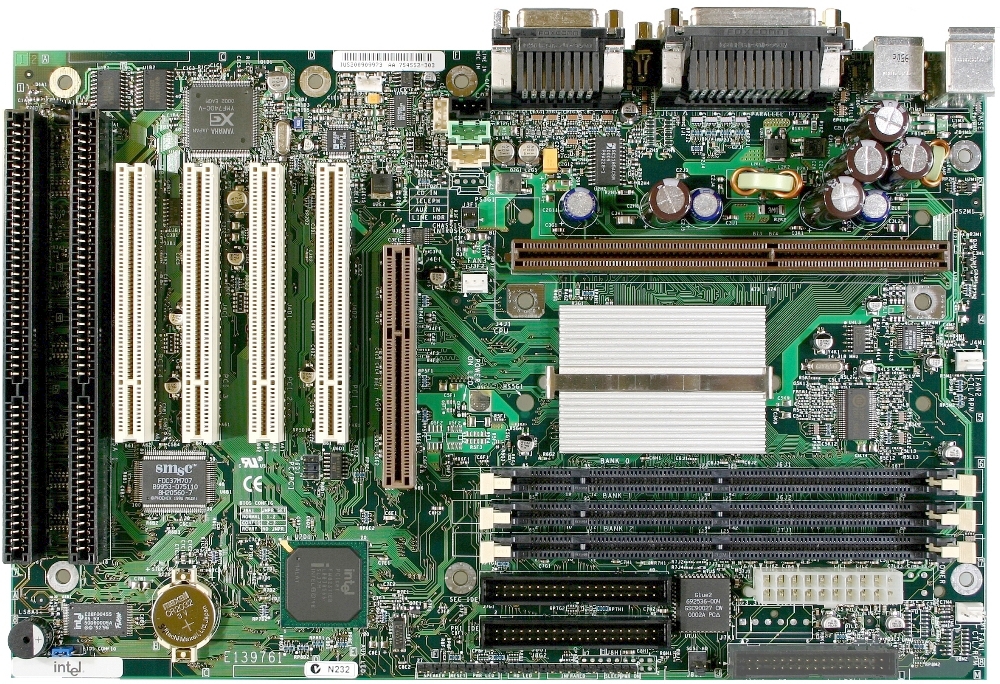 Here's a source in the pinout of the connectors: http://www.informit.com/articles/article.aspx?p=339053

Unfortunately the ATX connector is also proprietary when it comes to the pinout. Dell did this in the late 90's. On the intel version of that board the connector would be shifted to the left on those six empty solder pads. It's my understanding that powering up this board with a standard ATX PSU connected can fry the motherboard. You can buy adapters for standard ATX to dell pinout, but it may be too late if it's been tested with a standard ATX PSU. 😢

Note the shifted ATX connector and absent AT connector on this intel SE440BX board.

Luckily, those adapters are very cheap.

There's also the fact that if it is dead, it won't be a Dimension V333c at all anymore.

What I've found out is that the part of the front panel that indicates the model of the PC is removable- meaning that I can get a motherboard designed for a similar, more powerful Dell system, get a CPU to match it, and just change out that little plastic piece to the matching one.

I may or may not do this- I can get a replacement motherboard if it is in fact dead, which will be exactly the same as the original (model numbers for the win!). They are on eBay and if not on there, they are other places.

I could also end up throwing a random Slot 1 motherboard in there because the case is quite nice and in quite good condition, but I doubt I'll do that as it irks me a little to modify pre-builts like this PC with non-OEM components.

So, I'm not very concerned about this, whichever way it goes. I'll start with the adapter and go from there. This wouldn't be the first time I've learned something the hard way by killing a component, and I don't foresee that it will be the last. I wouldn't be here today if it weren't for a few fallen computers.

I should also mention that this is more of a side project than anything else. My main Pentium III 500MHz build is down due to my SE440BX-2 deciding to act weird, so I'm more focused on that than this. I don't want to seem like I'm happy that the board in this could be dead, as the amount of these sorts of things is growing thinner and thinner as time passes. I'm trying to look at the bright side of this at the moment because none of my vintage builds but one are working and it wouldn't be good to view all of these situations as negative.

I got some sort of Slot 1 Compaq desktop that won't go beyond a big red COMPAQ logo, it freezes, and I've troubleshooted that machine as far as I feel like I can (the front panel on it is missing, I have no idea what it is other than that it's a Compaq and that it's a Slot 1. It also uses an AT PSU- the first one I've ever owned, and it works, so even if the motherboard doesn't work, the PSU does so now I have an AT PSU. It also had a Quantum Bigfoot TX that seems to work.

Not many of my vintage builds or projects are going well for me at the moment. I'm only getting more vintage parts and pieces that I can't really use at the moment.

If you feel like soldering, I converted my Dell AL440LX board into a regular AL440LX board by desoldering the ATX connector and moving it across 😀