I put together a 486DX33 today and everything went buttery smooth except for the VLB Multi I/O.

Here's a photo of the Multi I-O: 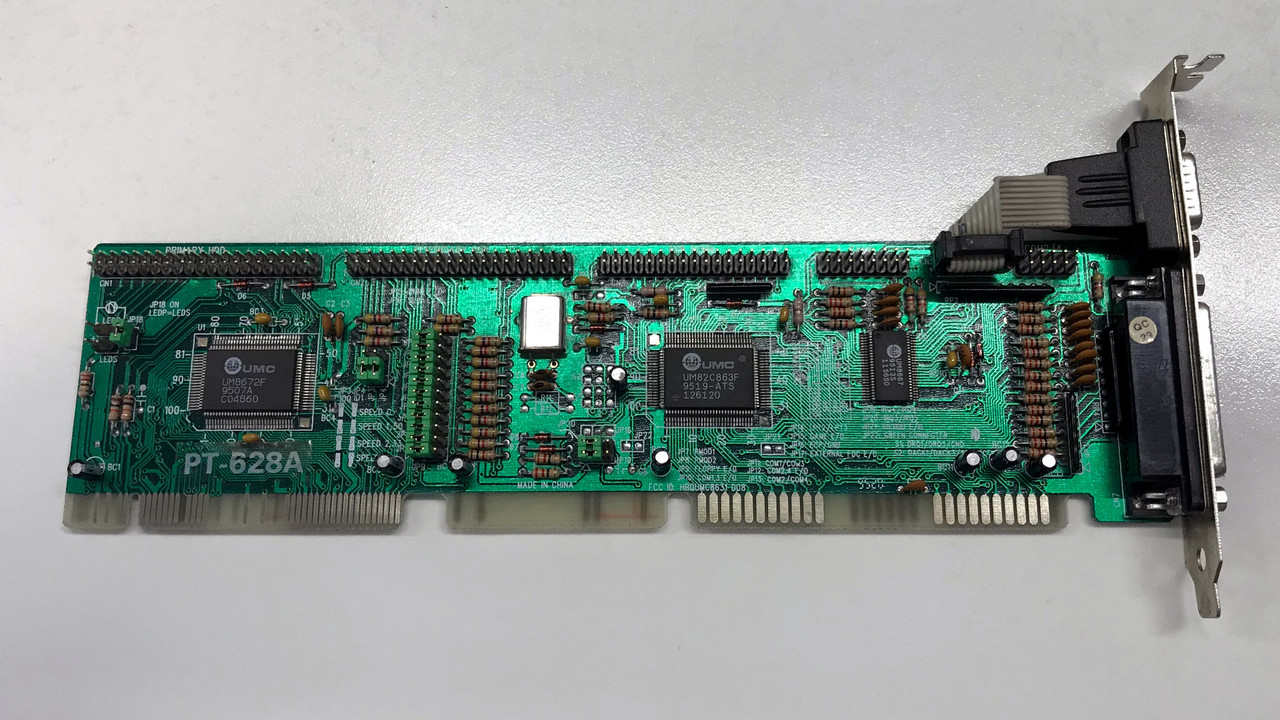 Serial and FDD on the I-O works perfectly though, so I have no idea why the CF-IDE won't work.

Sound Blaster's IDE controller getting in the way, maybe? It's set as Tertiary on IRQ11 by default, and can't be disabled AFAIK? Or maybe I have a setting wrong on the card? There is a speed jumper that can be set at 0, 1.5, 2.33 or 3.0 - set at 0 by default, no idea what it does.. I have found the manual to a very similar IO card (http://www.computer-museum.net/docs/FEIOL-UC3 … usersmanual.pdf) and it shows ID0 ID1 speed jumper settings, they relate to different CPU speeds and relevant IDE cycle and active timings, maybe I should play around with this?

I would change the two "speed" jumpers and see if it makes a difference.

I would remove all cards except Video and IDE controller. Check for correct timing setting in bios a cpu delay on motherboard. Test with a conventional ide hard-drive. Make sure you have a good battery and all correct jumper settings. Reference your motherboard manual for IRQ and DMA defaults.

I will check all these but I realized something else: the board was configured to run with an SX40 chip, probably a U5S; I set the CPU type to 486DX and speed to 33MHz, but it seems I left the VLB jumpers to >33MHz and 1WS. I will change these to <=33MHz and 1WS and see if that helps. I think it might. If that works, I will then try 0WS.. If it doesn't work I will then play around with the CPU speed jumpers on the IO card.

I've tried every speed and wait state on the VLB and the IO card and it just didn't work. Some settings hanged at POStT completely, some settings posted but hanged at IDE detection - it just won't work. I guess it's either a flaky VL Bus on this cheapass motherboard, or the VGA and IO Controller not playing well together on it, or whatever, but tonight I'm downgrading to an ISA IO Controller. Not that I think it would matter much for DOS, but still, Meh... I was really hoping to try a VLB IO Controller for this build 🙁

Might not be related at all but are your IDE cables 80pin or 40pin?

Might not be related at all but are your IDE cables 80pin or 40pin?

Sound like a resource conflict.
Look at these docs for reference from my GA-486vs
http://www.motherboards.org/files/manuals/47/486vs8a.pdf

Also test and try to fdisk and format your CF adapter and CF card on another computer and place back in your 486.

The CF has been flashed and tried on my 386SX.

The only possibility that I haven't ruled out is IRQ conflict. There are no IRQ jumpers for the VLB IO card, but I'm fairly certain they are hardcoded to 14 and 15. The tertiary IDE on my SB16 is jumpered for IRQ11. I really doubt that's very likely.

I haven't tried to boot the system after removing the NIC though, which may itself be doing something strange; I will try this as a last resort.

Did you actually try if a real hard disk with less than 528 MB works?

Also, as already suggested, remove all other cards while testing.

Did you actually try if a real hard disk with less than 528 MB works?

Also, as already suggested, remove all other cards while testing.

Smallest real Hard Drive I have is 2GB I'm afraid. The only two other cards are Sound card and NIC, I will remove them from the ISA bus and test tonight.

A strange problem. I've attached a pic of the Multi-IO I got from eBay for my DX4-100 build. I'm using one of these ultra common SD-IDE boards.

With a 40 conductor IDE cable. I have the SD-IDE on the VLB side and the 6X CD-ROM on the ISA side, also 40 conductor IDE. I'm using an 8GB SD card and DOS 6.22 is able to see the entire "disk" but with 2GB partitions. Using stock wait states and 33Mhz clocks. Not sure if any of this helps, but it's the setup I'm using.

I've attached a pic of the Multi-IO I got from eBay for my DX4-100 build. I'm using one of these ultra common SD-IDE boards.

What about the missing pin on your CPU? Datasheets suggest it's an address line (A27), so I'd expect problems much worse than a CF card not working if that's the case 😀
Anyways, maybe try a CPU with all pins present.

Huh and today I learned a thing. Looks like the original poster and the card I have are quite different.

OOOH! Ya know what I just realized, this is a CF-IDE not an SD-IDE. So as I understand it the CF-IDE are more or less a pass through to the ATA interface of the CF card. But most CF cards have the "removable" bit flipped to on. This tends to throw off IDE controllers. Ideally for me at least, I like to use what I have for builds, but in this case I think you may want to replace the CF-IDE. If you're able to verify that a spinning IDE drive will work, and 2GB should work, I suggest going with an SD-IDE board like the one I linked on Amazon in my previous post. They present an IDE interface to the controller and use the SD card as storage. Not sure how they do it but it seems extremely compatible, as I have yet to put one of these in an IDE machine and have it not work. The CF-IDE adapters on the other hand, I have personally never got working. Even using a CF card that supposedly does not have the removable bit flipped.

What about the missing pin on your CPU? Datasheets suggest it's an address line (A27), so I'd expect problems much worse than a CF card not working if that's the case 😀
Anyways, maybe try a CPU with all pins present.

It works absolutely fine aside from the IDE problem; with no IDE device installed I can boot to DOS using floppies and run games no issues.

Regardless, I doubt A27 is related to IDE either, it's probably for addressing memory and I don't have memory installed that would require such a high address line to be used at all.

I have some more troubleshooting to do.. I will also try the system with a 2GB Hard Drive to see if that gets picked up.

If I have the same issues with the ISA controller, I will just replace it with an SX33 or a U5S33 though.

Did you ever get this card working?
I just got a similar UMC8672 card. It's different than yours though in that it only has a primary IDE interface, but that seems like an artificial limitation as there are places on the board for a secondary one but all the components are missing.
The first time around I tried it, the BIOS would hang unless I disabled LBA. It turned out my attempt to enable EPP somehow caused it to think there was a secondary IDE. Not sure if I made a jumpering mistake somehow.
In the end, I have it working now and got the DOS driver installed that tunes the speed. Speedsys says buffered read speed 11085 KB/s and linear read speed 5545 KB/s (is that good?)

Last thing - I had it working with Linux last night passing the ide0=umc8672 parameter. Today, it doesn't work; says umc8672 not found. I even went into DOS DEBUG and tried doing the same i/o port reads and writes that Linux does to detect the card and I can't get it to react how Linux wants, either. I wonder if using the config utility I got it into some different mode where it doesn't respond the same way. It isn't clear to me whether this card has some kind of eeprom to remember settings or if power cycling totally resets it. I'll have to look at the config util in IDA some more when I have time this weekend.

Mine was new in box with a manual. The manual makes it seem like my card came with one or serial/parallel chips. I think mine supports only 16450 serial and possibly only SPP. The manual actually has the 5 in 16550 overwritten with a 4 using a pen.

I did not, I eventually settled for an ISA IO Controller for that DX-33 build. By the way, that DX33 with the missing A27 pin turned out to be a fluke regardless.

Old thread I know, but I have one of these VLB IO cards. I found that if I used the config program to set some options then a few things would stop working in my system -the config program would create a config file called 866XDATA in C: and this would stop programs like CTMouse from seeing a serial mouse on COM1 for instance, even though Mouse would enable the serial mouse correctly. Anyway, removing this config file and purely setting the configuration of the board via jumpers removed the issue. So maybe look to see if a similar config file exists and try removing it.