But I've seen trays of just plain old vas100 chips being sold, not just a few laying around, like they are sold by pallet it seems. Is someone still producing these things, where did they come from, because it doesn't looks they they will run out anytime soon? I have heard several people around the internet talking about having to buy new vsa100 chips to solder on there broken Voodoo 4/5 cards. I know Nvidia owns the production rights to all of 3DFXs old stuff. But maybe they could do a nostalgia fueled anniversary release of the 5500 and 6000. From the looks they don't even have to produce vsa100 chips, they just need need to buy a decent enough stock. 3DFX is a big name in retro PC gaming, I feel like they could easily break even selling reproduced 5500 and 6000 cards that are AGP 8x compatible or even PCIe variants. But at the very least, I think someone could draw up a DIY vsa100 AGP 8x or PCIe board, just buy the parts, solder them here and there, and in the age of the internet a dedicated team of developers can make a BIOS for the card and put it on github, download, flash done. A man can only dream.

These VSA-100 chips are new old stock. They were auctioned off when 3Dfx went belly up. Someone bought them and kept in storage until recently. They are only useful for repairs because there are no open source gerber files, BOM, etc. which could be used to manufacture new boards. I bet NVIDIA will never produce anything 3Dfx related.

Shame we don't have the resources available to recreate these cards, reverse engineering it would probably be a massive undertaking and might violate copyright.

But as for the 8x mod. I found out a few things after analyzing the Italian post. So on his AGP riser card, he soldered the middle pin of a 10k trimmer (which I have found on amazon) to Pin A34 on the riser. I found a similar riser card on Ebay AGP2PROX-3. This riser should fit into an 8x slot right? and then the V5 should be able to plug into the pro slot? From what I've read Pin A34 should be in-charge of voltage across all version of AGP slots. One of the outer pins is then soldered to a female molex power plug. A 3.3v wire from a Sata power cable is then soldered into a male connector and the two are connected together. From what I understand this will self power the riser card to supply 3.3v of power to the GPU instead of 1.5v or 0.8v, this way both vsa100 chips get the power they need to function. I saw another post where he tried to get a V5 working on an Abit board, he didn't make any notable modifications to the board other then cutting out the AGP slot so the card would fit, something that I'm guessing is negated by a riser card. Then he did a much fancier self powering wire mod, not sure why but from the post dates the abit mod is from 07 and the 4coredual is from 11, so maybe he refined his method of powering the card with 3.3v. This might of been the wiring mod anthony was referring to. But after searching how to get this card to work I've seen all sorts of methods, from removing the chip near c45, soldering the back of the card with a molex cable. But the last thing I know for certain is that I also have to make sure that the AGP setting is set to x4 in the BIOS.

All that is left is why he made the modifications to the mother board. Nothing was done to the abit board that had to be. I think I read something about intel boards being picky with voltage, so thats why he messed with the board. After I make this modification to the riser should the card just work in the AMD system? I can't find any other detailed modifications about running a 5500 in a 8x slot. The abit he modified uses the same socket 939 that I'm planning on using. Should it just work? I'm really not sure, anyone got an opinion on this? I am very dedicated to getting this card to work if I can, I may not fully understand how all this stuff works in the end, but with proper guidance I think I can figure out what I need to.

Without any "very good" documentation and/or guidance, i would not try any mod of V5 into socket 939/775...
This piece of hardware history is too expensive from my point of view. 🤑

Does it really!? Where can you buy such an adapter?

Ebay. Alternatively via mail from creator, if you live in Russia or close by.

All the other kids, with the pumped up kicks
You'd better run, better run, faster than my blaster

Well nothing ventured, nothing gained I suppose. I got a really good deal on the 5500, so if it dies it dies, if it takes the mother board with it, I can just order a Neo2 and a 9800xt on the cheapish. I'll only be out about 270ish USD.

to make v5 work on 1.5v agp slot mobo you have to switch vsa100 bus signalling voltage by strapping resistor, provide reference bus voltage of 1.5v and make some soft of rework on back side of pcb (just compare 2x and 4x boards). that all i can remember so far

this mod will provide functioning v5 on any agp 2x and 865 chipset based boards. pretty much possible that after this mod card will not work on universal agp slot mobos, like 815 based. it is possible to make v5 work on all kind of agp boards, but more reworks required

From the engineering point of view, the primary difference between the AGP 1.0 (2x) and 2.0 (4x/2x) in the compatibility area is the former makes use of 3.3V signalling with the reference voltage (Vref) provided by the mainboard while the latter requires 1.5V signalling with Vref provided by both the mainboard (B66 pin) and the video card (A66 pin). There is also a difference in voltage levels between the specs as Vref = 0.4 Vddq for the AGP 1.0 and Vref = 0.5 Vddq for the AGP 2.0, but it may be ignored largely. It takes usually a resistor divider with two RC chains for noise suppression in order to generate Vref.

I would like to get my SIV utility to report the Voodoo 5 fan speeds, does anyone have the board schematics so I can see what happens to the tachometer signals please? 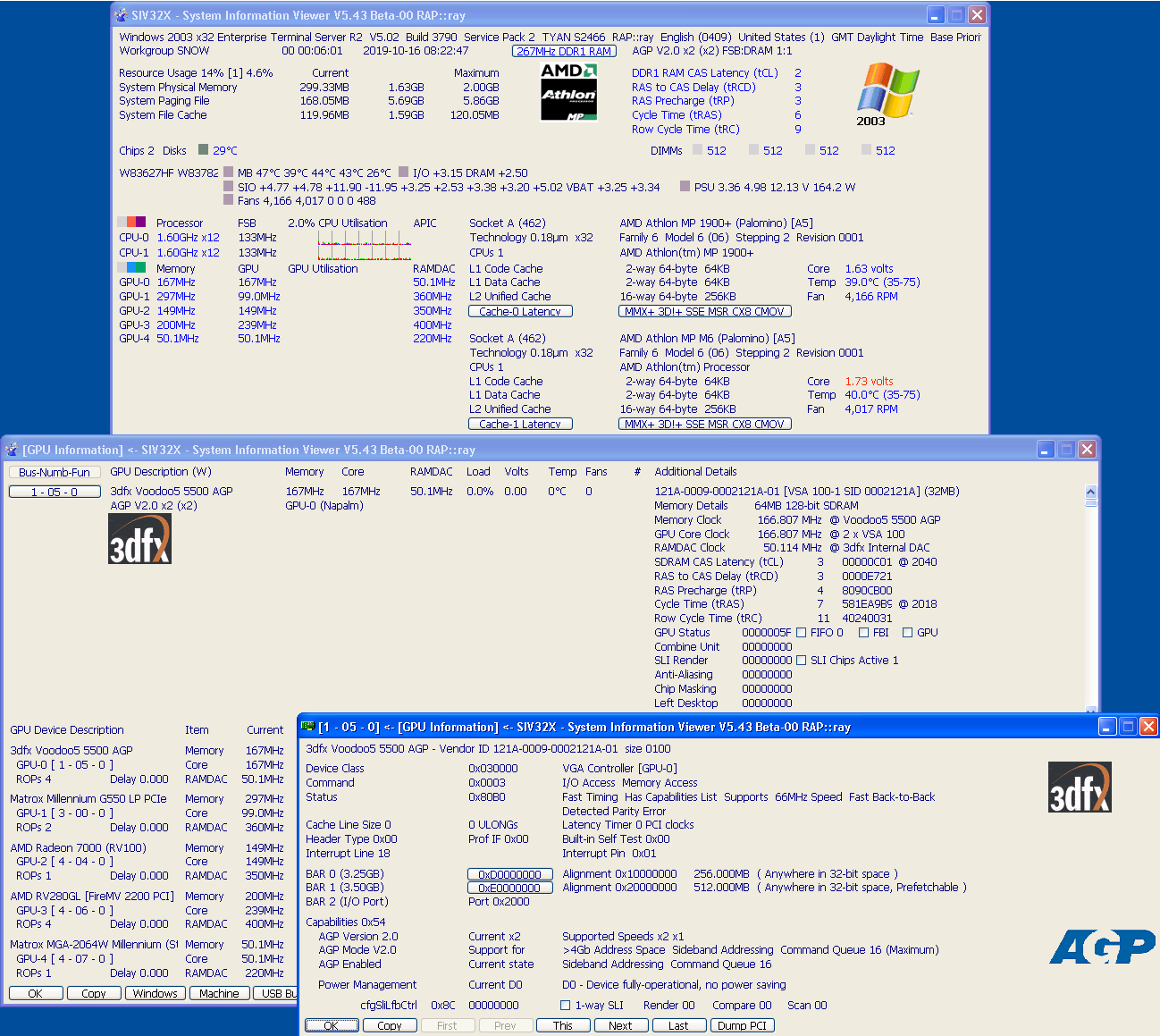