The CPU speed reported by CPUZ is to say the least incorrect 🙁 Even with just CPUZ active it's wonky. 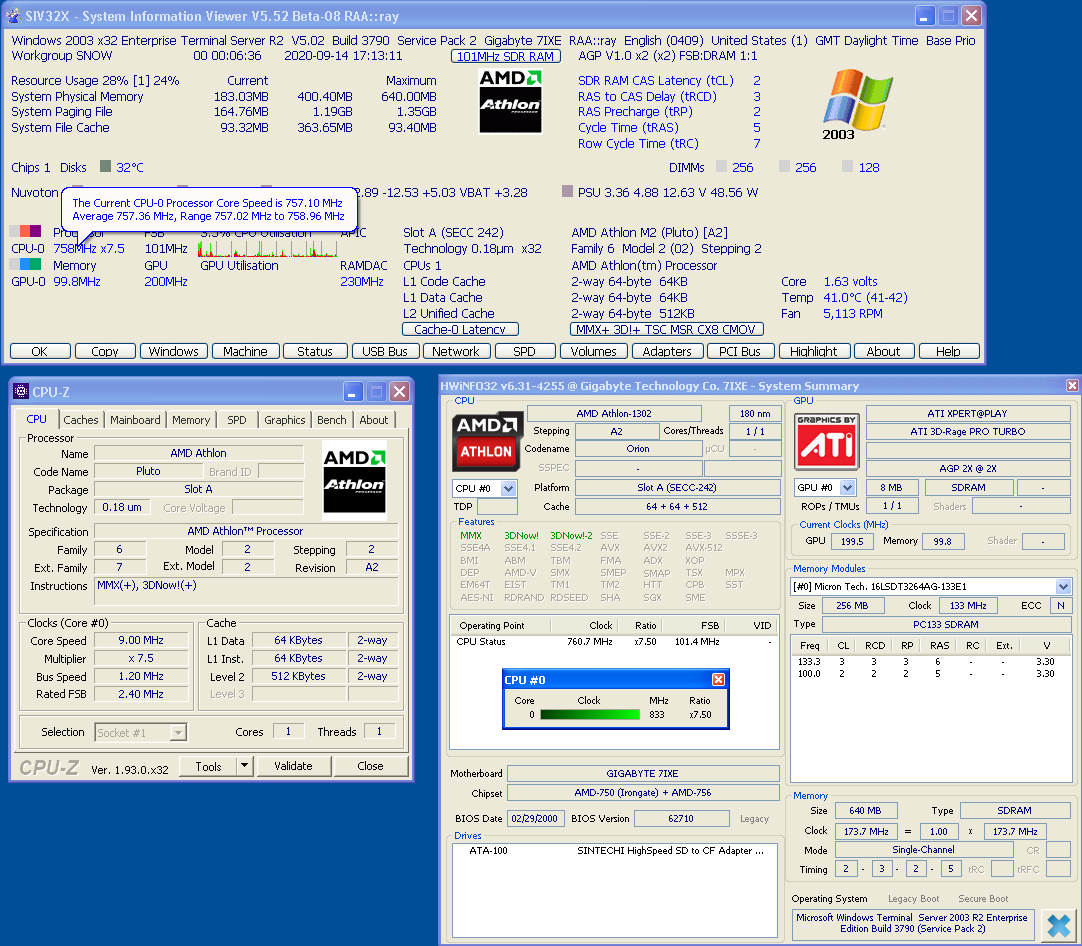 I could try this with a Cirrus Logic VLB card that I've got lying somewhere, though I won't immediately be able to pull the BIOS dump (it's currently inside a 80486DX4-100 system that I need to get from my uncle's house).

Give me maybe 2-3 weeks and I'll try to get this sorted out.

Thanks for the report.
Can you please copy that file cpuz.ini in the same folder as cpuz_w9x.exe, and try to run the application again ?

Thanks for the report.
Can you please copy that file cpuz.ini in the same folder as cpuz_w9x.exe, and try to run the application again ?

Also same result with this cpuz.ini
Video memory is also not scrambled.

Sorry, you were wrong. Same result.

Sorry, you were wrong. Same result.

OK thank you.
Here is a new test version, can you please use the ini included in the zip ?
Thanks.

I'm sorry. There is no other behaviour.

Hum this one is a struggle.

Hum this one is a struggle.

I joined the struggle. It turns out that there is no agreement between different environment on how to handle the x86 instruction bytes 0F 3F 07 0B. If you just enter these bytes into Google, you will quickly find out that this sequence is commonly disassembled as vpcext 7, 0Bh. This is not a processor instruction, and will fault as undefined opcode on most x86 processors. The Hypervisor in Microsoft VirtualPC uses 0F 3F as entry point, and this instruction is used to detect the presence of this Hypervisor.

On the other hand, there is the "Alternate Instruction Set" of the VIA processors. As Wikipedia says

The Alternate Instruction Set (AIS) is a second 32-bit instruction set architecture found in some x86 CPUs made by VIA Technologies. On these VIA C3 processors, the second hidden processor mode is accessed by executing the x86 instruction ALTINST (0F 3F). If AIS mode has been enabled, the processor will perform a JMP EAX[1] and begin executing AIS instructions at the address of the EAX register."

It seems the PC-Chips M787CLR mainboard boots into the operating system with the AIS enabled, which is known to be a very bad idea for system security, as the AIS (if enabled) can be used to fully bypass any kind of memory protection. CPU-Z calls the VirtualPC Hypervisor with EAX equal to 1, which is not at all a good address to jump to. I overwrote the offending instruction by 0F 0B 90 90, an opcode that is guaranteed by specification to raise an undefined opcode exception, followed by two NOPs. Now CPU-Z works on this machine (but it would fail to detect VirtualPC).