What are the weirdest pieces of retro hardware you owned?

What sort of odd, questionably useless but oddly cool hardware did you used to own back in the day?

I think the weirdest thing I owned was the Cue Cat. It was a gimmick for one of those Internet Rewards programs so common back in the early aughts which tried to get you to buy products via their affiliates for discounts and points towards rewards, only this one was backed by hardware. It was an oddly shaped barcode scanner, resembling a big pen carved into the shape of a cat while also resembling a discreet marital aid with a USB cord for a tail. The trick was that each scanner would inject a unique ID when it scanned a barcode to associate it with your account. I never actually enrolled in the program further than what it took to get the device, but I imagine the idea was you'd scan something and it would take you to a site to order that product from one of their affiliates.

What I ended up doing with it was making a ghetto secure password device. Since it emulated a keyboard for inputting the scanned code, and also contained a unique ID, I would scan a 12oz coke can for my password. Didn't work with everything - the code was fairly long - but it worked for Linux and Windows just fine. It's still around here somewhere, just a question of which box in which area it ended up occupying.

Weirdest, hmmm? Probably my Thrustmaster Frag Master game controller - a big, ugly, plastic yoke (X, Y, rudder, throttle - 4 trigger buttons and 6 other buttons for a total of ten) intended for FPS's. It was a legendary terrible controller, but I saw it in the discount bin for $9.99 or less and I simply had to have it. It sits around as a conversation piece usually - I've pretty much never used it.

There was a single wire in the CueCat that when jumped to another bypassed the encoding and allowed it to output standard characters. I used a modified CueCat to scan all my CD bar codes into an Access database, which is an activity that turned out to be a big old waste of time.

Reply 3 of 43, by Anonymous Coward

-a Heath EGA video card with a VGA connector (No, the card did not support VGA)
-A Captain 286 memory expansion card that took sixteen 256kb SIMMs for a grand total of 4MB. The SIMMs were a really old type that used metal cans for memory chips, and the card had a bazillion DIP switches. I never found the software for it and chucked it.
-a 20" Electrohome VGA monitor. Only supported 640x480, and was old school with a grey bezel. Did I mention it weighed as much as a small car?
-An IBM 5140 convertible fully loaded with expansion cards
-Intel Inboard PC. I know these are somewhat famous now, but they're seriously weird with a 386DX strapped to an 8-bit bus. How did Intel ever make such an expensive, complicated and pointless upgrade?
-IBM PGA card. Three PCBs strapped together, and used a faster 8088 than the main CPU in the 5160.
-A CAS4 12ns SDRAM module. Seriously...who the hell ever had CAS4 memory? Almost nothing supported it.
-Sony CDU 33A CD-ROM drive. Weird because it used a spring loaded eject mechanism which was pretty uncommon on desktops, but even weirder that the indicator light was not an LED but a regular incandescent light behind a two coloured plastic window, which slid from side to side to indicate drive activity. I believe the panel had its own motor, which blows my mind since the CDU-33A was supposed to be a cost reduced drive. Why not just use a 5 cent LED and be done with it?
-OPTiVision OPV9100 MPEG2 decoder card for EISA bus. Apparently it was developed by a NASA spinoff and has a software package for Windows 3.1, so you can watch MPEG2 videos on a 486. Never found the software or seen another card like it.

Amd 486 cpu that has been marked to have 8Kb of L1 cache on top of the cpu, but actually has 16Kb of cache.

I have owned a lot of weird hardware. Just browsed through my sold pictures and this one is quite mentionable, I think:

It is a multi user Xenix system, called the Altos 586 (with terminal and tape unit).

-a Heath EGA video card with a VGA connector (No, the card did not support VGA)

Tbh, that actually sounds reasonably sensible: an EGA card with RGB analog out so you could use a VGA monitor, so you didn't need to invest in a dead-end TTL monitor around the time VGA was clearly the future.

As for my own weird stuff... lots of somewhat obscure things, but little that could really be considered weird. This controller probably comes closest: 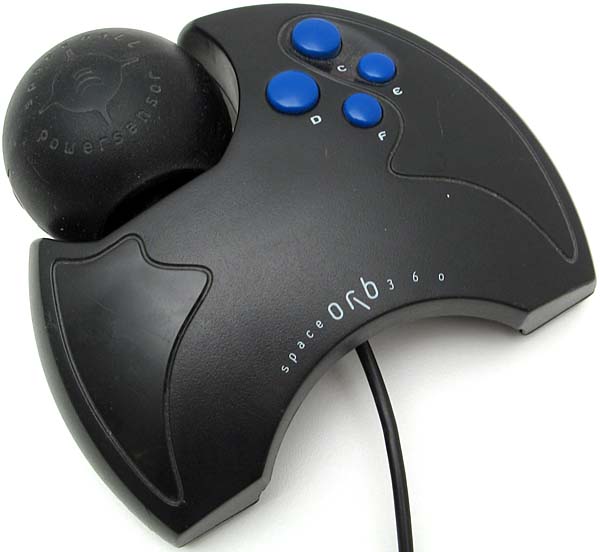 Space Orb 360 gamepad. Interesting idea let down by dubious implementation. One of these on a solid base for single-handed use leaving the other hand free for a mouse would have been great. This is... curious.
(note that I also have a more recent USB SpaceMouse Compact that does just that, but I haven't tried it in any games (yet)).

-a Heath EGA video card with a VGA connector (No, the card did not support VGA)
-A Captain 286 memory expansion card that took sixteen 256kb SIMMs for a grand total of 4MB. The SIMMs were a really old type that used metal cans for memory chips, and the card had a bazillion DIP switches. I never found the software for it and chucked it.
-a 20" Electrohome VGA monitor. Only supported 640x480, and was old school with a grey bezel. Did I mention it weighed as much as a small car?

I had an old memory unit like that, never knew what system or standard it was. I think I trash picked it.

And I used to have this really weird Mitsubishi (I think Mits, might be wrong on that) 21" monitor that only had BNC inputs, yet supported 1600x1200 (pretty sharp too!) and had a BNC to VGA adapter. Literally had never seen BNC before. It was a massive beast, deeper than it was wide and didn't taper off at the rear like most monitors do, weighed around 120lbs and the front glass had to be at least an inch thick. It was one of my first purchases on eBay and was somewhat damaged in shipping but was a pretty solid monitor until it got replaced by a Viewsonic CRT.

I used to have a Peltron (I'm not sure of the exact brand) amber CRT, it had 3 BNC connectors on the back (Horizontal Sync, Vertical Sync and video (which was just the green signal...), it could do inverted colors (amber background with black text) as well... I still don't know what happened to it, last time I fired it up (4 years ago) it made all sorts of weird noises, I think I stashed it in a closet before my dad threw it out when we moved....

The drive is somewhat normal, but crack it open and check out how the indicator light works. I've never seen anything else like that. I wish I had kept mine so that I could make a video. You know that annoying electric sound the drive makes when the disk is reading? I'm pretty certain that is the sound of the motor that drives the indicator light, and not the disc heads.

Oh there are several weird pieces in the collection
Here are the weirdest parts where information on the web is next to non existant
- Siemens PCM Series PC, a Microchannel machine build by Siemens unluckily missing the reference disk
- Epson 5.25" 11 MB Floppy drive using a dedicated ISA Interface board
- IBM 6611 router, basically a RS/6000 6012 320 with Microchannel, DBA ESDI drives, i960 based stacked interface boards and a stripped dows AIX as OS
Not sure if the "action replay board" for DOS PCs is really that weird? https://en.wikipedia.org/wiki/Action_Replay
Most of my other collection may seem weird for usual PC users like
- Servers with 4 Pentium or PPro CPUs
- Servers with 6-8 Slot 2 Xeons
- Fibrechannel Hardware like switches and disk enclosures
- FDDI, Token Ring, VG Anylan and ATM networking equipment
- AIX and HP-UX Workstations
eisapc

I know the weirdest retro hardware I *want*:

About the only thing that comes to mind was an old Apricot (ACT) Sirius 1 PC that I used to own. It was given to me for free. CPU was an 8088, it had no HDD and ran everything from 5.25" Floppy, of which it had 2 disk drives. It ran a very early 1.x version of MS-DOS.

Problem was, it wasn't IBM compatible which limited what I could do with it back then. It had non-standard connections for the monitor & keyboard too. I also had no printer for it and no way of attaching a standard printer, so the whole thing was rather useless - you could save files in WordStar & SuperCalc, but then couldn't print them out nor could you read the non-standard format floppies on an IBM compatible PC.

I still thought it was a cool little system and I regret disposing of it when the monitor connector fell apart. The green screen monochrome monitor was always strange to me, as it had an anti-glare filter which also gave the impression that the screen was flat. You controlled the monitor brightness from the keyboard.

Perhaps the weirdest piece of retro hardware I own, at least in regards to form factor, would be my Amstrad PPC640 portable computer. It's just a really weird shape overall...a big gray slab of a thing with a tiny and horrible LCD screen, dual 3.5in floppy drives and a full-size keyboard that folds out on a hinge. This is also the oldest truly-portable computer I own, although you'll need like 500 C-size batteries if you plan on running it for more than 12 minutes at a time. 😜

Strange form factor aside, it's pretty much a run-of-the-mill IBM-compatible system. I even managed to get Windows 3.0 running (or rather crawling) on it once by using a parallel Zip drive as a fake hard drive. 🤣

Used to have a PPC640, picked it up at a car boot sale for about £20 in the early / mid 90's and yet another one I wish I'd kept... Remember wanting to go BBS hunting with it but as I didn't pay the phone bill my parents never let me 🤣.

Back on topic weirdest was probably an ICL OPD, from memory it was a Sinclair QL with a phone, a speech synthesiser and two micro tape tape drives.

Do these guys count? 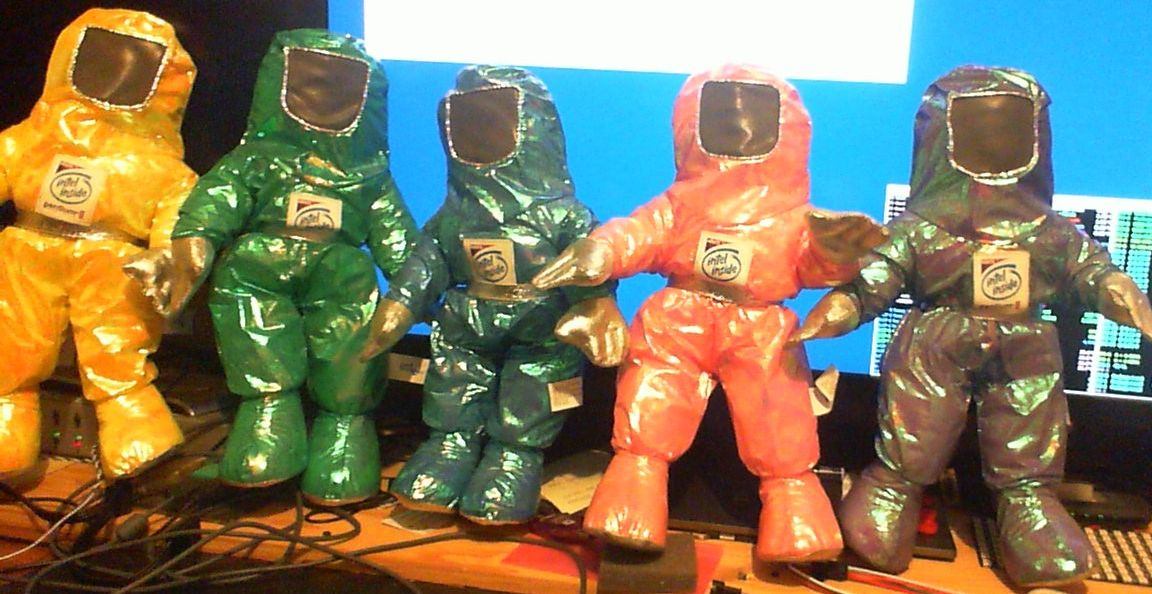 The U Shaped Intel Controller 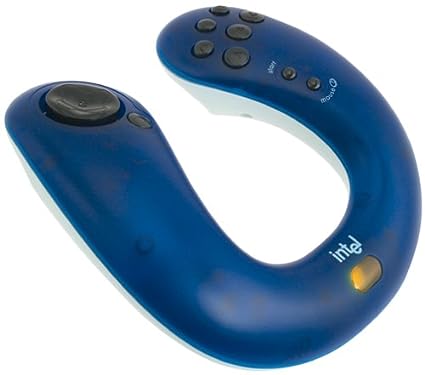