As you can tell, this probably does not achieve anything useful, just the cool factor of being able to run windows 95 on a 1987 386. 😎

I was inspired to try this when I came across this thread on VCFED here: http://webcache.googleusercontent.com/search? … strip=1&vwsrc=0(btw for some reason I can only access the cached version of the site, the server seems to be down for a few days now - anyone know what’s going on there?)

In the thread it states:
Windows 3.1 comes with Hercules Monochrome driver, so nothing interesting here.
Windows 3.11 lacks such a driver, but it can be downloaded and added during install, still nothing special.
Windows 95 officially requires VGA, but you can install it by upgrading 3.1x, and it will use 3.1x Hercules driver.
In theory, it should work with Windows 98 and ME as well, but I've never tried it nor saw any success reports - anybody willing to try?

So I took on the challenge with my Compaq Portable 386. The computer is running in CGA mode, with 10 MB stock ram, and a TI486sxl-40 CPU, with no software clock doubling or anything enabled (didn’t load Cyrix.exe) Here’s how far I got:

Clean install of MSDOS 6.22 then installed Windows 3.1 which has a native Compaq Plasma Display driver. Confirmed driver was working and computer was in CGA mode, went to run Windows 95 Setup from windows 3.1

Installed Windows 95 (from floppy images through my GOTEK floppy emulator). Windows 95 installer detects and lists the display in the hardware configuration confirmation as a Compaq Plasma Display. 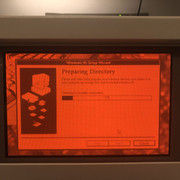 Plasma Display loses half of its vertical bars during “Analysing your hardware” phase of installation, but otherwise seems fine with mouse working and screen partially legible. See Image: 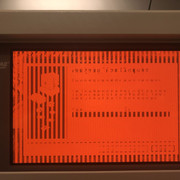 When install is complete and trying to boot to windows, the computer loads from the hard disk for about 30 seconds then the plasma screen flickers for about 10 seconds. I tried to capture it on video but couldn’t - it seemed like maybe the refresh rate is off or something? I have no idea… below is the screen right before the flashing happens 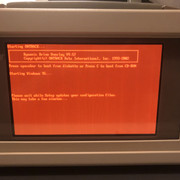 The flickering stops then a blinking cursor appears for about 10 seconds on the left then a message appears: Error loading USER.EXE You need to re-install Windows

Then that message disappears, followed by “ You can now safely turn off your computer. If you want to restart your computer, press CTRL+ALT+DEL

Tried starting in safe mode, that did not do anything. Tried booting into dos and dos prompt seems to work as normal. Checked the config.sys and autoexec.bat and they look fine.

Anyone have any ideas what to try? The theory in the thread from VCFED seems to have some merit - Windows does indeed retain the display driver from the previous installation (at least when upgrading from Windows 3.1 to 95) Thoughts?

well using Windows 95 with an EGA card does work but the lower vertical resolution is problematic in some cases.
I think you should try with the standard CGA or Hercules driver, the Compaq plasma driver may have windows 3.x specific code or something else

Looks like the early Win95 Beta's supported CGA mode, with a ton of bugs.