The description of the motherboard in the listing is wrong but what is inside the bubble wrap is more interesting. Anyone want to guess what board is actually inside. 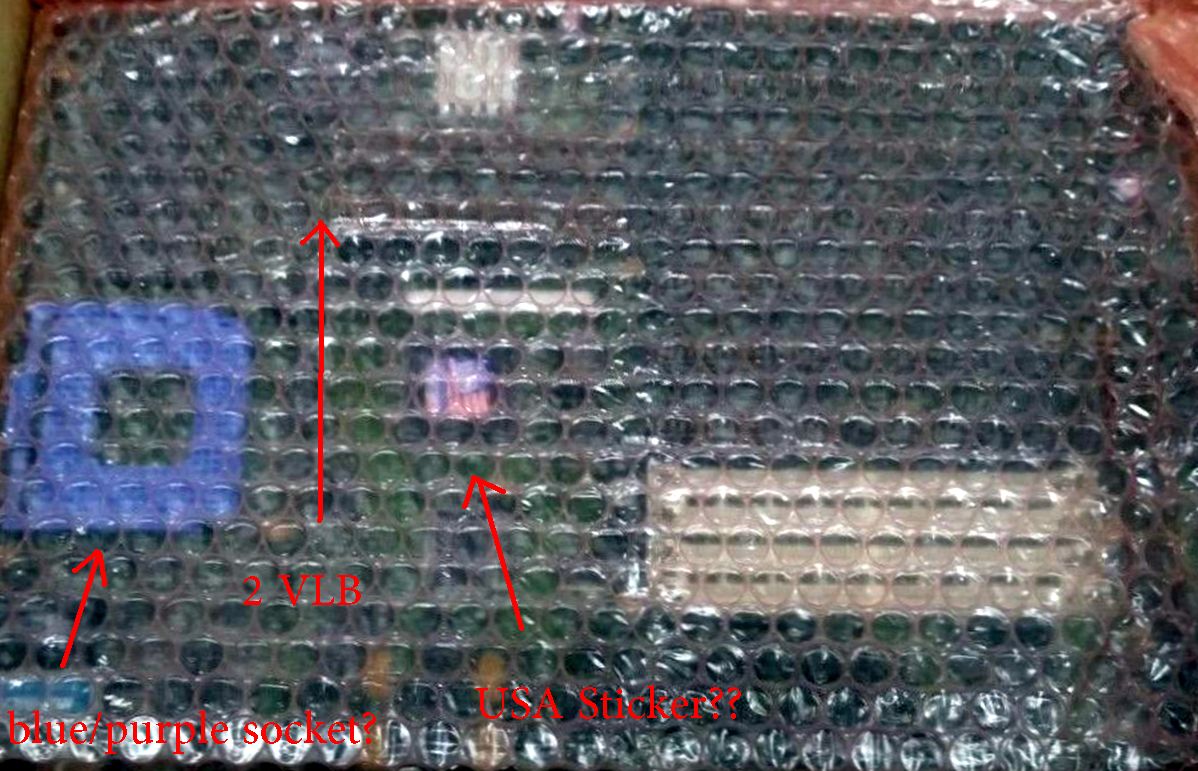 Alaris Cougar 486BL/3 motherboard.
I used to own one, I recognize it anywhere.
https://stason.org/TULARC/pc/motherboards/A/A … UGAR-486BL.html

nice, i paid 40 dollars shipped seems like a steal if its not broken.

Definitely an Alaris Cougar, a very interesting beast nonetheless, it has a on-board IBM DLC3 (think of it as a 486DLC on steroids, with a whooping 16kb of cache).

Reply 5 of 19, by Anonymous Coward

It also uses a fairly uncommon chipset, the OPTi 499...the flagship of the 49x series.

Thanks guys. Would this make a good platform for Pre Pentium gaming. Do you guys think this is worth building assuming it works?

I would leave it as an 386 computer or at least use an IBM 486dx-66 Blue lighting CPU.
Keep it all Blue lighting and call it the “Blue lighting build”.
Why do you need a Zip drive if you have a CDROM and CF card ?
Maybe add a 3com 3c509b network card or Intel pro 10.
Keep it a 486dx-66 or jump to a pentium overdrive 83mhz. But skip the 486dx4-100 overdrive.
Its only about a 10% boost over the 66mhz CPU.
The pentium overdrive is the BIG performance boost.

Pentium Overdrive lets you run Windows XP and gives a big boost in Quake only because of FPU. For everything else that uses ALU only, the ODP is hardly faster than a Write-back cached DX4.

But man, this is a Cougar with BL/3! If you want to run ODP or DX4, get another So3 board for that. Thousands of boards that can do that, only one Cougar. Hell, I'd be more than happy to swap one of mine for this 😉

🤣 nice necro. Ended up building a pc out of this. Maybe that Os2 site guy knows, but I never was able to enable L1 WB cache on the CPU. Despite the fact that the BL3 supports it and the IBM cobalt manual states the board has L2 WB. There is no option in the MR-BIOS to enable either one. I messaged serpent Rider who has one and he doesn't know either. So ya if I could enable WB than it would be awesome. But its all a mystery to me. I even tried a 486Dx2 wb cpu and can't enable it even though the chipset supports wb. so yea.

The reason why the L2 cache on the Cougar is stuck in write-through mode, is because there's no socket for Dirty TAG.
OPTi 82c495 chipset-fitted boards require a 64Kx1 SRAM to hold the dirty bit information for write-back mode, which was unfortunately left off by many manufacturers. I know this because I have a Packard Bell 486 with this very chipset, but thankfully that had a socket for the dirty TAG so I was able to get write-back L2 running on it after finding a 64Kx1 SRAM to stuff into the socket. Off-cache access times reported by CACHECHK went down by about half(!).

Sad to hear the Alaris Cougar leaves this little socket off too. Oh well, it's still a nice board by all accounts - how often do you meet a clock-tripling 386DX?
Actually the Cougar II has dirty TAG onboard. My guess is, either the utility isn't identifying the onboard cache correctly, or (more likely) the OPTi 499 chipset mine has simply isn't the fastest 486 chipset out there. It's more a fast 386DX chipset. Some mid-life chipsets are 386/486 do-either chipsets which don't typically excel at running 486s.

Sad to hear the Alaris Cougar leaves this little socket off too. Oh well, it's still a nice board by all accounts - how often do you meet a clock-tripling 386DX?

I sense an opportunity for a mind-bogglingly-complex niche upgrade for the retro community to figure out. 😀

I have that board as well. It is a nice and unusual one, but not sure there is much 386 in it.

The system you built around that board is sweet. I really like the part selection and the wood grain is a nice touch.

Actually I take back what I said about the Cougar's cache being stuck in Write-Through mode - my own Cougar II arrived, and it's got a surface-mounted CY7C188 dirty TAG chip in addition to the 32Kx8 regular TAG.
My guess is just that the OPTi 499 isn't the fastest chipset in the world. 😜

All the same it's a nice board. I'll be putting mine with the onboard 486BL/3-75 through its paces soon.

Actually I take back what I said about the Cougar's cache being stuck in Write-Through mode - my own Cougar II arrived, and it's got a surface-mounted CY7C188 dirty TAG chip in addition to the 32Kx8 regular TAG.
My guess is just that the OPTi 499 isn't the fastest chipset in the world. 😜

All the same it's a nice board. I'll be putting mine with the onboard 486BL/3-75 through its paces soon.

can you post a picture of your board id like to see the difference. As I was never able to get mine in writeback, maybe your bios is different too.
As far as it being slow the benchmarks I got when running a Dx2 66 are equivalent to everyone else I have ever seen with a DX266 and is a few cases a bit faster.
If I can get mine in WB mode and install 512k cache I suspect it would be faster than most boards instead of the same.

This is my board here. sorry I don't have a better screen shot, and Its at my other house so i can't take another. 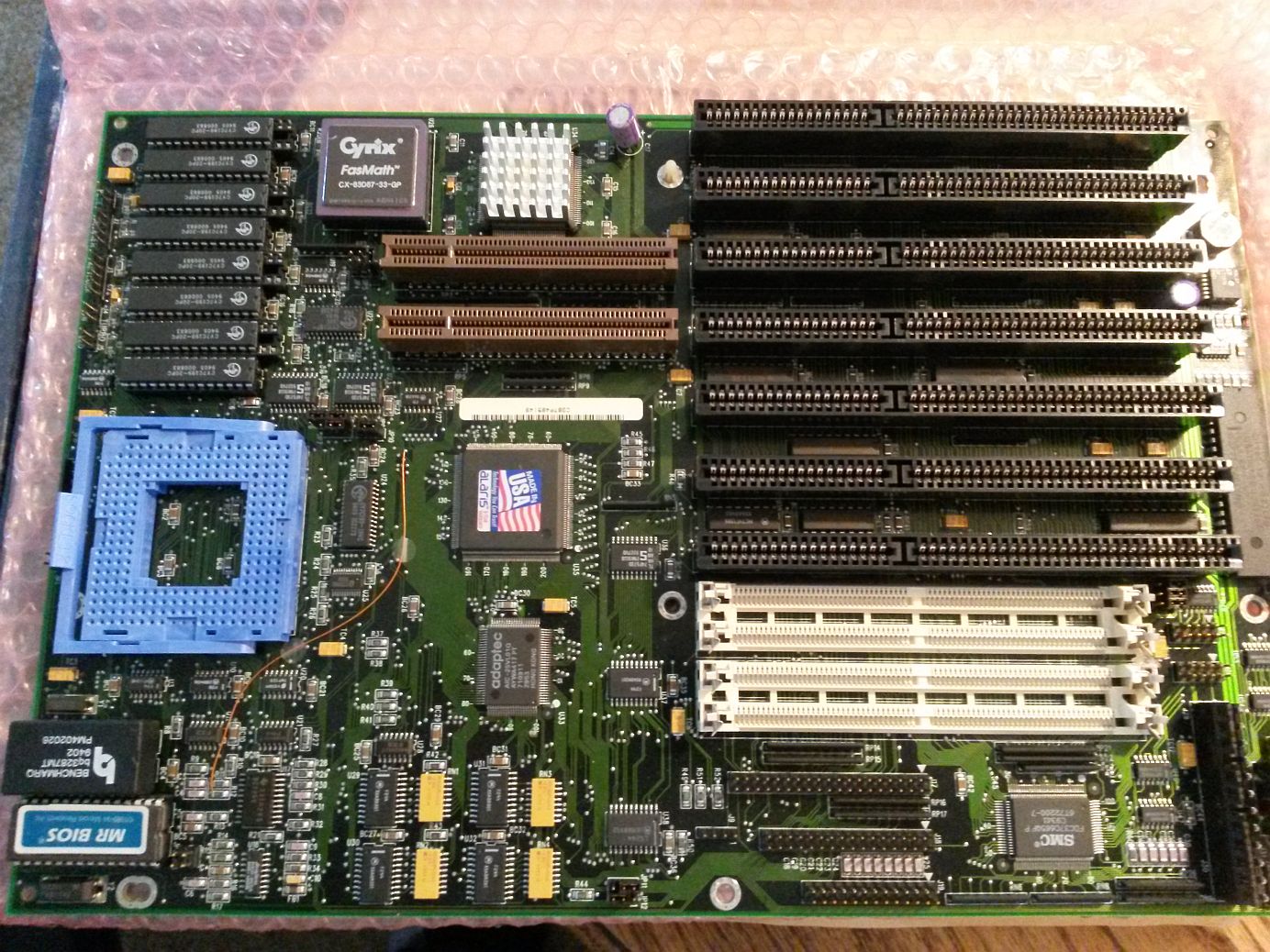 That's one solid looking board - what's the Adaptec IC's job?

That's one solid looking board - what's the Adaptec IC's job?

I have this motherboard too, and I believe that is for the onboard IDE controller.
It's fairly good. I think it may even be on the VLBus, but won't take advantage of it without drivers.
Just FYI, this motherboard CAN take an AMD 5x86 133mhz overdrive chip, but not the PNY/Trinity Works Power Stacker. I've never gotten it to run reliably with that, but the Kingston turbochip works flawlessly.
It is quite possibly the fastest 386 in the world, and a decently fast 486 with an overdrive chip.

Far as I can gather my board looks completely identical to yours. Yours also has the CY7C188 dirty TAG chip and MR BIOS as mine has, as well. Only difference I can tell is the IDE controller is an Appian ADI/2 chip instead of Adaptec (they're the same chip apparently).

With regards to write-back, I was talking about the L2 cache set-up with the smaller, second TAG chip. Typically, write-back arrangements have at least two SRAM TAG chips, one primary TAG and a typically smaller capacity chip to hold the dirty bit flags.(Some chipsets, such as OPTi's 82C895 and UMC's UM8498, use a single chip to hold both TAG and dirty bit flag data.) It's entirely possible the OPTi 499 chipset's L2 cache operation isn't being correctly identified by the software available.

On my system the 486BL/3's internal cache is also being identified as Write-Through. My guess is, if it's write-back, it's not identifying as such to our software.