I always had a favorite, go-to HDD. For drives <2GB I really like the black Western Digital Caviar drives. For ~10-20GB, the Seagate U series in the foam wrap. For 20-150GB, Seagate Barracuda.

Larger than that and I'm mostly in the SSD camp, but when going for disks: For 500GB-2TB, I actually really like Samsung, and >2TB, it's pretty much 50/50 Seagate/WD.

For the single-GB range ... I don't really know. Those Western Digital Caviar drives, with the silver shell and the label with green, orange, or red accent lines -- those are just not... at all... reliable anymore. I have half a dozen and wouldn't use any of them -- the ones that still work at all, that is. That was a low point for WD, and I had a couple fail even back when they were new.

So what do you like? Preferably a decent track record and relatively low bearing noise. Seek noises that make you feel warm and fuzzy. (Y'know, what everyone wants.)

I am already home.

you are playing with the most unreliable part of an old PC.

Although i have ~30 old HDD's from 30mb to 20gb i dont want to risk my invested time into installing alll the software (no, cloning doesnt work with every pc), i want something reliable, fast and easy to transfer files, that's why i use CF to IDE adapters.

I am a huge fan of the Seagate Barracuda IV and V. As far as I know, they were the first really quiet hard drives, and I prefer quiet PCs. (My username, STX, is the stock ticker for Seagate.)

If you are in this range...can't see why anyone would NOT use CF.

Worth mention I check drives thoroughly, so those would have got the 4-pass of badblocks, and whatever level of smart they returned, and had no bad sectors.

I don't have any I'd recommend until the 40 Maxtor Diamondmax Plus 8 6E040L0. That's out of an accumulation of about 50 now.

For most later period laptops with USB:

All these hdd stable and pretty silent.

I must be the only one alive who still uses real HDs.

Connor, Maxtor, and WD are what I use in the 1-10GB range, probably the same under that size and including Seagate if I am using SCSI. Also Micropolis for SCSI over 1GB (mostly in A/V systems).

From what I've seen in customer's machines where they ran drives to bearing failure very few regardless of era or brand last much past 70,000 hours.
If you plan to use them indefinitely you better start stocking up because they are just going to get more worn, more rare and more expensive.
.

Initially I was 100% on the CF-IDE camp, but I haven't had a good experience with those adapters personally. Detection problems with older motherboards, strange issues that make the FDD controller fail and missing the "feeling" of a mechanical HDD drove me away. I only use actual HDDs now, not any particular brand/model but I follow these rules:

Regarding reliability of specific models, other than known offenders (i.e. DeathStars and the like) I have found that everyone seems to have different experiences, especially when we're talking about used drives of unknown history.

EDIT: does anyone know what's so special about Conner drives? They seem to go for ungodly prices compared to other brands, even those that look really worn out are expensive!

you are playing with the most unreliable part of an old PC.

Although i have ~30 old HDD's from 30mb to 20gb i dont want to risk my invested time into installing alll the software (no, cloning doesnt work with every pc), i want something reliable, fast and easy to transfer files, that's why i use CF to IDE adapters.

It's a urban legend that any flash-based media is more reliable than a mechanical hard disk. Unlike HDDs, flash-based media has a limited lifetime due to every write event damaging the flash cells (a big reason to avoid used cards as a HDD replacement!). Also, the controller chip on it can fail at any time, rendering all data on it unrecoverable. A HDD on the other hand rarely fails that way. It will start to throw errors randomly, giving you the chance to rescue data. Also, there's no limit in how often you can write data to it. Apart from the very first hard disk in my first PC (240 MB Segate drive, 1994), I never had data loss because of a failed HDD. But I lost countless SD and CF cards, which just stopped working from one second to another.

I use hard disks in most systems without preferring any specific brand - I just use what I have, what fits in size, and does not show signs of wear (that is, no bad sectors and no noise). I avoid some brands, however, like Conner and Maxtor for example. Some of my systems do have CF cards, but never because I think they are more reliable. In any case, I take the time to do a backup of the system once the base install is done.

Unlike old HDDs, flash-based media can be easily replaced, easily backed-up (just pop them in a modern machine) and they aren't hard to find in working condition nor do they cost as much.
Also makes multi-boot easy. Just use a front mounted CF and swap drives.
.
So THAT'S why I have tinnitus!
.

IDE drives are going to old in general and at such small capacity these are easily pushing 20 years. so would go with whatever is available. Ex Xbox HDD's will probably have had an easy life and relatively new.
This is my list of drives under 10GB going from that Seagate seems pretty good but that may simply be due to being the most common of OEM PC's of the era where most of the drives will have been pulled from.

I must be the only one alive who still uses real HDs.

Connor, Maxtor, and WD are what I use in the 1-10GB range, probably the same under that size and including Seagate if I am using SCSI. Also Micropolis for SCSI over 1GB (mostly in A/V systems).

Nah, I'm still keeping some old HDDs, too.
However, I rarely use them. Except for that slightly buggy MFM drive in my PC/XT clone, for example.
For some reasons, it sometime won't spin-up correctly (can't locate its own position).

In that rare case, I switch the PSU OFF-ON quickly when it's about to seek.
Most of the time, this brings the old fixed disk "back on track" (pun intended). 😀
Of course, that's not very elegant. PSUs don't like that.

Anyway, I'm very happy with CF cards and XTIDE Universal BIOS in my 286/386 PCs. 😀
A few Conner drives that I still have got are reserved for future use as "props" in PC cases.
Simply for the sake of authencity and as a memento of how a PC used to look inside.

Of course, they could/can also be put in service from time to time.
Maybe as a secondary data drive for MIDI and MOD files, etc.
Or anything else that does involve linear reads (less stressing to the HDD mechanics). 😀

Bottom line:
I like both CF cards and old Fixed Disks. It's just that CF cards are so much more versatile and easy to handle nowadays.
Also, they don't cause that high-pitched noise of modern HDDs (similiar to the sound of humming coils etc). 🙁
- Don't get me wrong, I used to love that thick-thick, brrrr-tt soundn i the 286-486 days.
In fact, i was so used to it that I could "hear" which part of program was loaded during boot-up (and afterwards sometimes, too). 😁
But unfortunately, over the years, I began getting more and more headache of it, if I was listening to it over a longer period of time.
That was the main reason why I switched to SSDs on my real PCs. If it wasn't for the sound, I would have had gotten myself a #
RAID setup with quick HDDs instead.

I remember reading a posting (at Vogons ?) about old Xboxes and their HDDs.
Apparently, in some country (Brazil ?), the original Xboxes were sought after because of their HDDs (for use in XP rigs for daily use). 😀

I had a thing for Quantum Fireballs back in the day. I still remember buying a 1GB Fireball when it came out. It was widely reviewed as one of the fastest at the time. My DOS PC currently has a 6.4GB Fireball CR that runs beautifully and sounds better.

As for modern drives, if you've paid attention to Backblaze's Reliability blog over the years, you'd know that up until fairly recently, Seagate has had by far the least reliable mechanical drives for many years (many drive models having >10% failure rate) About a year or two ago they cleaned things up and seem to be in line with the rest of the manufacturers now (~2% failure rates). HGST models are almost always at 1% or less failures and over the years have been consistently the most reliable. 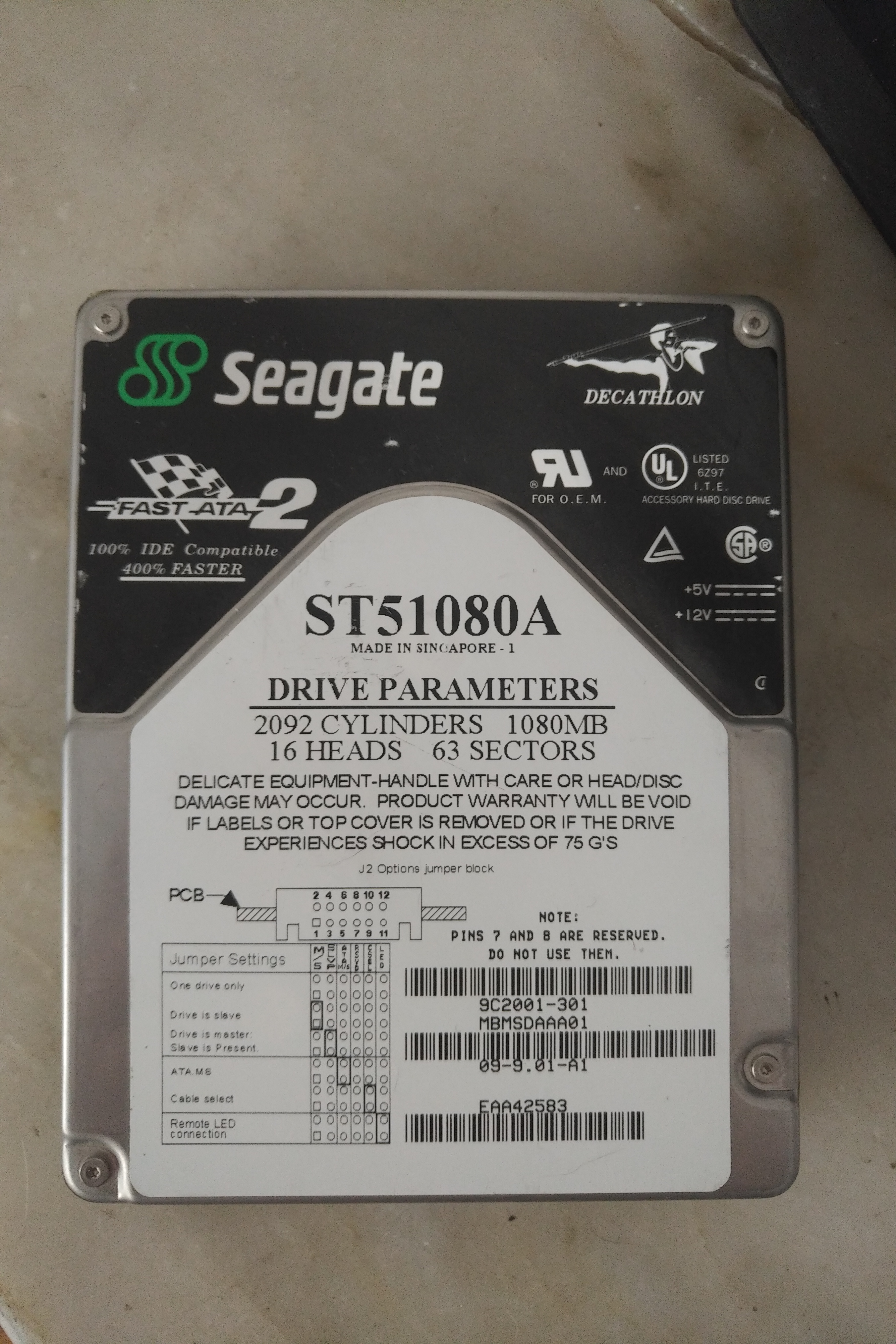 Nobody here (except me) appears to use Fujitsu enterprise HDDs 😀
They seem to be a secret tip for connoisseurs.
I like them because they are quiet, fast and reliable.

On my 486DX4-100 i use a 820 MB WD Caviar, the one with red label but i cant recall the model, IT'S VERY SLOW AND I LIKE IT before this one i used a modern-ish 10gb seagate which was kinda boring, i replaced it with the WD because it matched the era of the pc and also it has that old school clicky sound which everyone loves 😀

I tend to stick with newer, higher capacity drives and software limit them. I've used IBM, Maxtor, Seagate, Samsung, and Hitachi drives this way. I have lots of spares in stock, so I'm not really worried about replacement.