Here is the BIOS update info for that board:

Doesn't look like the single and dual socket boards use different BIOSes.

Any luck getting the second cpu detected?

No luck on the 2nd CPU being detected. I had already tried the BIOS update. I'm just going to wait on some pictures of a dual socket board so I can see jumper settings. I don't want to damage anything by accidentally jumpering the wrong connections.

Interesting project, I hope you eventually get it working with that second processor!

Stuck until I at least find some good photos of a real dual board. Project is shelved for now, but I check continuously for sale postings since that is probably the best hope I have to see a real board.

Hope the 2nd CPU is getting detected, Nice Stuff!

I had a dream a few nights ago that I messed up the soldering on the Intel S82093AA chip. Well, I went back today and checked it -- sure enough, I had one leg that was ever so slightly bent and not making contact with the pad. I carefully bent it back down and reflowed it.. now it works!!!! No secret jumpers, no special BIOS, nadda. Just add the socket, capacitors inside the socket area, VRM header and VRM, and the S82093AA chip.

So if you want to get a dual Pentium Pro out of this board, you just need to follow what I did in this thread. Case closed. 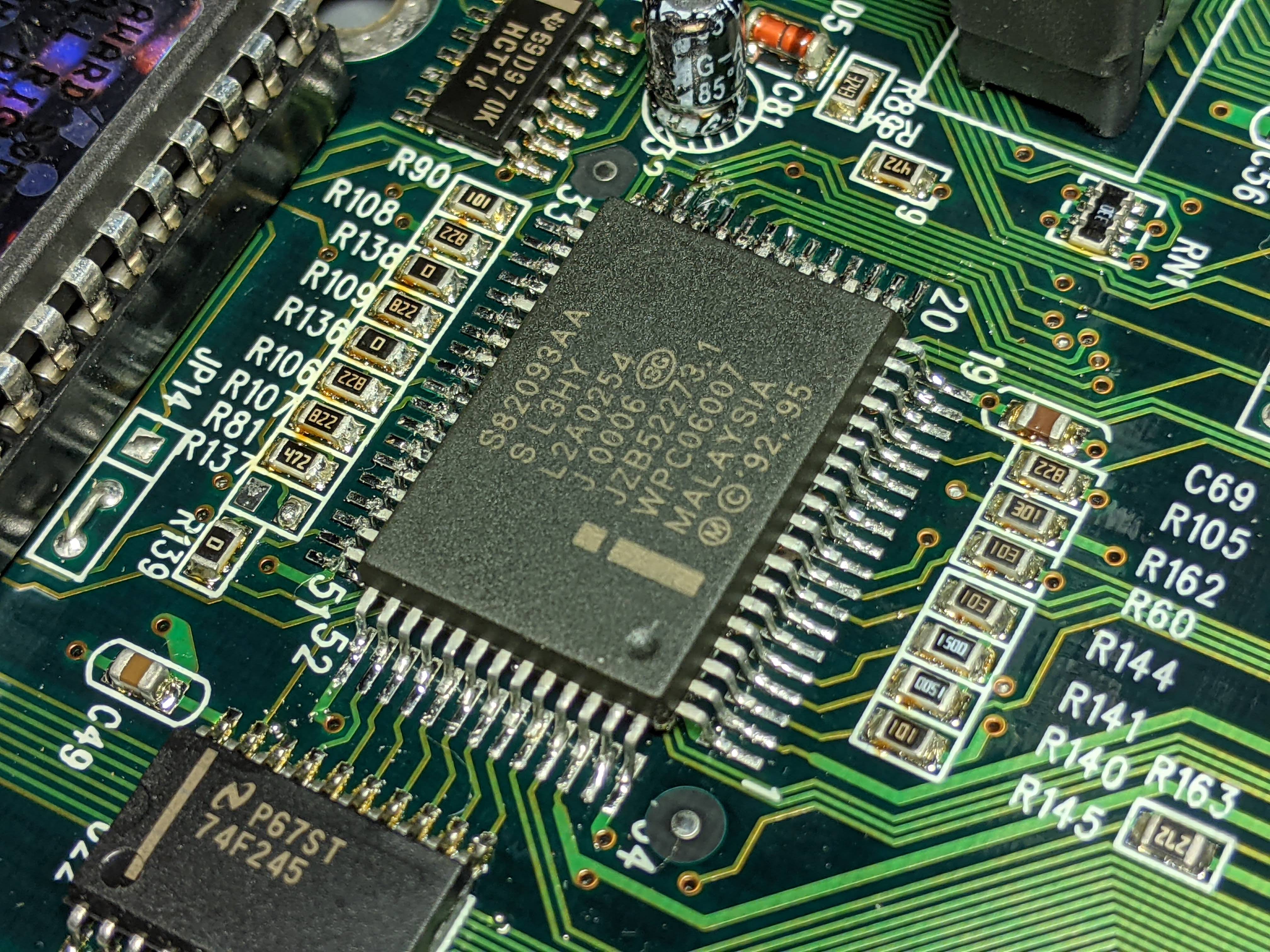 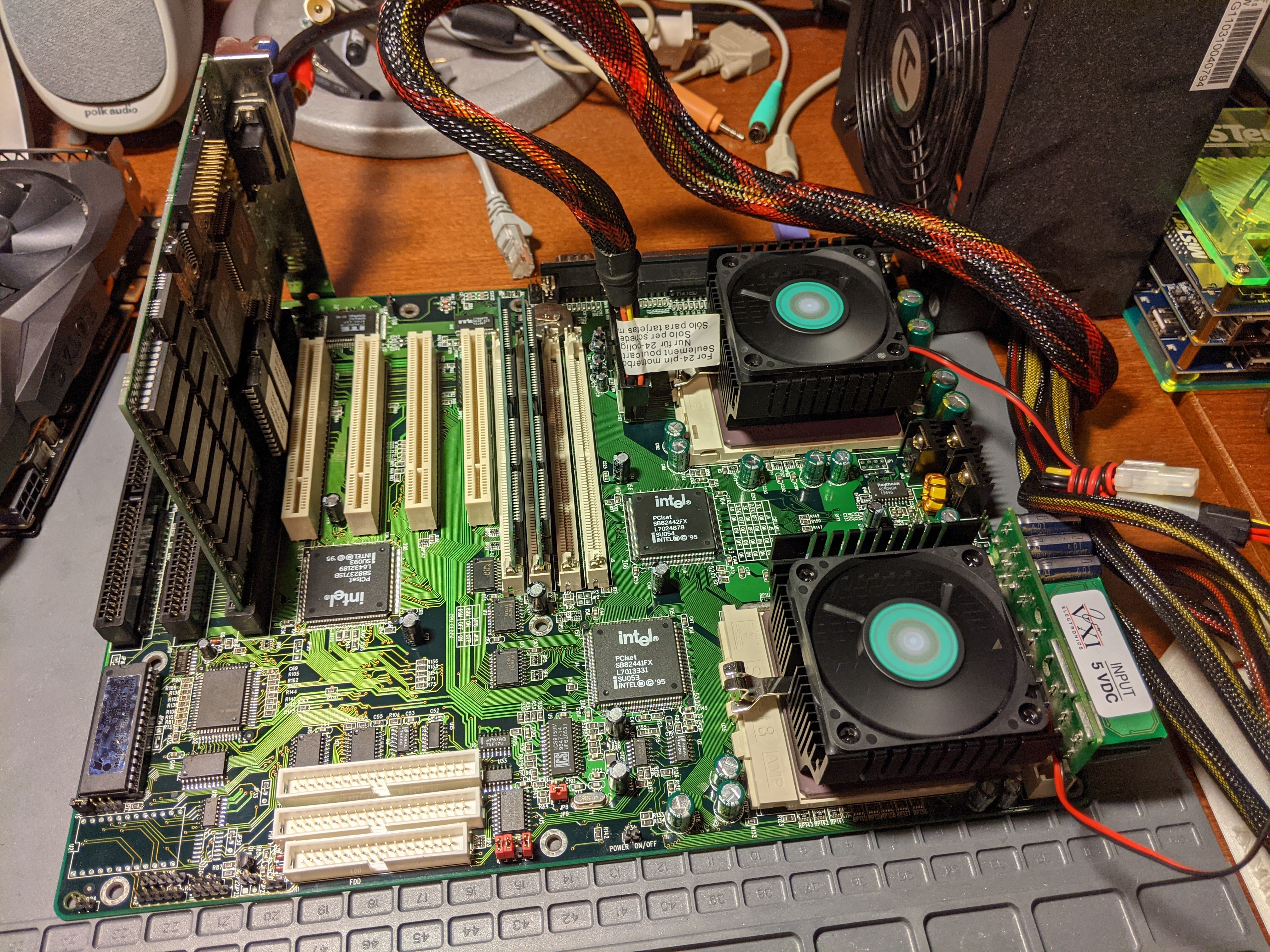 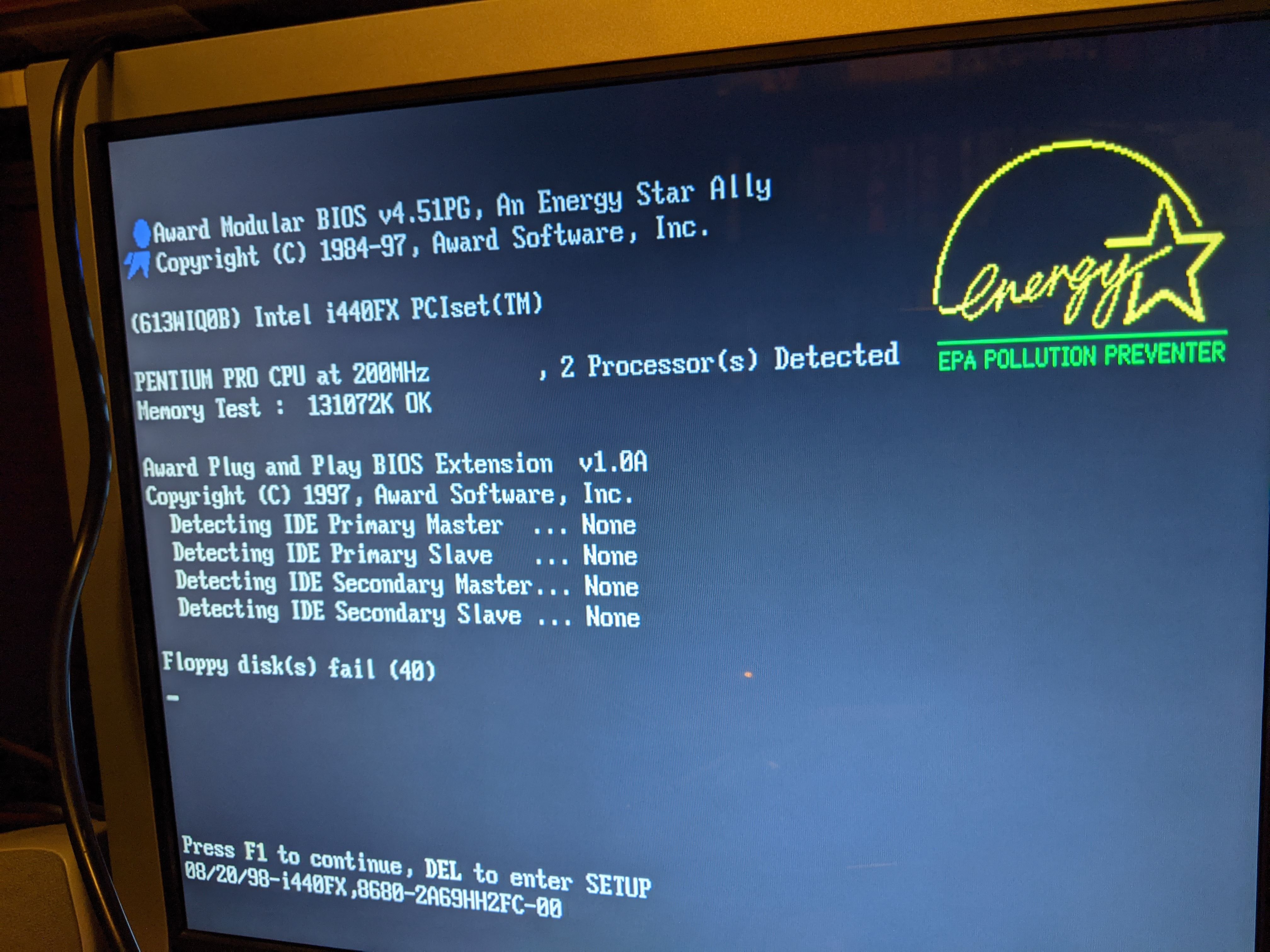 Awesome! Congratulations on your success! 😃

They made a single processor version of my board also. But luckily I have the dual version hehe

This is beyond cool and it's so surreal that you had a dream about it that led you to the discovery of the issue. Well done!

Noticed solder blobs on the pcb near the chip you had to add. May wanna grab those before they wander off.

Yea that picture was before I cleaned the board just after soldering. Everything cleaned up nicely.

Now to build this into a case.. I have a 3-digit MHz display in a beige case that should suit it well. Any recommendations on an OS? Windows NT4? Some early variant of linux with dual CPU support?

SWEET! I'm glad you were able to get this solved. I can't wait to see the finished system now.

Yea that picture was before I cleaned the board just after soldering. Everything cleaned up nicely.

Now to build this into a case.. I have a 3-digit MHz display in a beige case that should suit it well. Any recommendations on an OS? Windows NT4? Some early variant of linux with dual CPU support?

funny you should ask I'm going through the same fun at the moment, try server 2003 standard r2 see if it works. it has gpt support and pressing f5 at startup on it or xp/2k/mce should bring up a menu with mps multiprocessor as a option

as for linux try debian jessie followed by older versions if that doesn't work jessie works on my k6 but not on my dual 233 mmx so wheezy might be the trick. use one of those xlcs xfce whatever desktop environments I for get their exact name but you'll know when you see the options. the other options will be slow.

btw, order 4 128mb sticks from ebay for that thing. there is a set for sale of some hp sticks that are registered and buffered right now

if you get the chance, dump the bios and open it in awdbedit if you see a acpi table let me know and we can probably stick windows 7 on that thing I have a Iso file that will work with les than 512mb of ram but you won't need it if you pick up that ram

can't stress enough how impressed I've been with 7 if you have acpi try it.

also, look into pentium pro over drives on ebay you can bump that up to a 333mhz pII I think

check out my signature for the dual socket 7 build