Thanks for the tips dionb, really appreciated! I'll probably go the NXPro+ALS100 route 😀 that should basically cover everything.

Thanks for confirming what I thought about operating systems. But please know I'm with you - I have a very, very soft spot for Win2K for some reason 😀

- Should I be concerned about the "Check system health - VCore=2.05V" error message when booting the P3-600?

My guess is the 'Check system health' message doesn't have anything to do with the Vcore voltage, despite the confusing way it's presented. I've had a couple Gigabyte boards display the same message and it always turned out to be related to either the lack of a -5V rail or a missing/too low CPU fan RPM. Go into the BIOS and find the section that displays detected voltages, temperatures and fan RPMs (should be something like 'hardware monitor' or perhaps under 'chipset features'). You should be easily able to spot which detected value is going to be out of range or not present. If the BIOS allows it, disable monitoring of that particular value. If you can't disable it, try upgrading or downgrading your BIOS, sometimes later or earlier versions add the option to disable monitoring of certain values.

As for the build itself, besides the other recommendations others have already mentioned, I would seriously consider upgrading the CPU to something faster, like a 800-1000+ MHz Coppermine. The Voodoo 3 can scale up to those CPU speeds in many games, at least at resolutions up to 800x600, so a 600 Katmai would still be bottlenecking it regularly there. If you intend to play at 1024x768 or higher, then CPU bottlenecks will not be a concern.

As for the 3rd build (XP), I would honestly just replace the whole thing. The CPU is pretty weak for anything but early XP era games, likewise the 1 GB of RAM, the SB Live fits more into a Win98 build and should be replaced by an Audigy 1/2 or X-Fi for EAX4/5 support. And then there's the weakest part, the video card. The 7300 LE is quite simply too weak for XP games, I'm not sure it would even beat a geforce 4. I strongly recommend scrapping that whole build and replacing it with a Core2 one. Those are dirt cheap to get, you can find a bundle of motherboard + CPU + 2GB of DDR2 (or more) for like $10-20. Add a cheap low tier DX10 GPU, can even be something as low as a geforce 8600 for another $10 (but stay away from absolute trash like geforces 8500/8400/9500/9400/210) and you have a $20-30 XP system that will run absolute circles around your current one.

Good call! Silly me. I did check the power monitoring in BIOS but did not notice the -5V was at 0. Duh..it's a modern PSU indeed and I've read about that problem before. If I'm not mistaken only some specific ISA sound cards may need the -5V? Is there a list somewhere out of curiosity? I found several topics on the subject on Vogons but no resource on cards that require it. As I'm using the AWE32 and it sounds correct, so I guess it's not a problem. Apparently there's no way to disable the monitoring of that value, and I'm running the latest BIOS which I need for bigger drive support. Guess I'll live with the alert 😀 CPU fan RPM are fine btw.

For the CPU, Funny you're saying this as I was indeed looking at a faster alternative, but they are hard to find 🙁 I don't see many interesting Slot 1 CPU's online at the moment, at least on eBay, but I don't really know where else to look. Otherwise it seems like I could go all-in and purchase a 1.4GHz PGA2->PGA modded Tualatin from some well-known seller from South Korea and put it on a Slotket. Looks like that would work. Maybe that's the good solution? Do you know about it and what do you think?

As for the XP, it's just a machine I recovered for free. I know P4 were shit anyway...interesting to know a MB-CPU-RAM bundle for a Core2 could go for so low! But I'm honestly not really looking into making an XP build right now, so I'll live with it.

Indeed you don't need the -5V rail in your build, so you can simply ignore the warning. Just don't go connecting a PC speaker to your motherboard, unless you want to be driven crazy by the beeping 😀

You're right that Slot 1 Coppermine CPUs can be hard to find, at least harder than their socketed brethren. Also usually more expensive when you do find one. You might be better off going with a socketed one and finding some cheap generic slocket adapter that supports Coppermines. You'd also need the adapter if you were to go with the pre-modded 1.4 GHz Pentium III-S from the Korean eBay seller. It's not exactly cheap though and is still not guaranteed to work, as your motherboard needs to be able to supply the correct lower voltage to it (1.45V instead of the ~1.7V that Coppermines use). I'm not familiar with your specific board, so I can't say if it supports such low voltages or not.

(at least, assuming it's really ALS100 and not ALS100+ which has crap OPL emulation)

I have yet to see an ALS100+ card that does *not* come with an external OPL3 or clone chip.

I have one, and have seen several others: 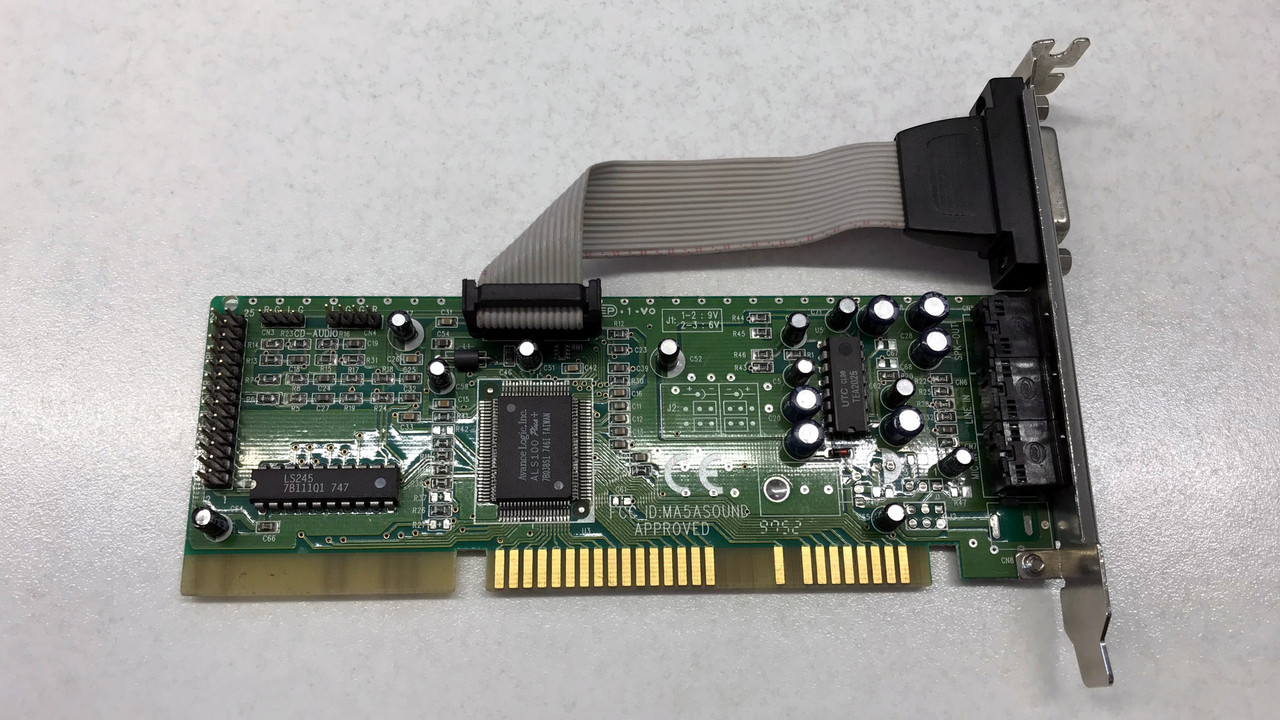 > would a build with a later PIII/Celeron Tualatin CPU be useful between builds 2 and 3, or should build 3 handle it all fine?

I believe you need 4-5 builds to be covered. This is what I run roughly:

I could do with a single win98 pc but run 2 for variety. I could probably combine the two DOS machines, but it gives me options for more ISA sound cards and cpu slowdown abilities. I would not go below 4 builds if I can help it.

None of those are bad builds. The XP system is definitely under powered, I'd echo the advice of going to Core2Duo/Quad, a faster graphics card, and using a later EAX capable soundcard. You also have the option of an A3D card. The DX2-66 is a bit fast as mentioned, you may be able to jumper your motherboard to run it at 20MHz doubled.

For a 'fast card' you ideally want something that can handle everything up to 2007 well, as that's when EAX died with the introduction of Vista. I have a Radeon HD6950 in mine, I think if I was doing it again I'd buy a GTX580 or something slightly later - they're fairly cheap on ebay, very fast, admittedly a bit power hungry, but as far as I'm aware are less liable to die from heat stress in the way the otherwise brilliant 8800GTX did.. You lose out with the 8 bit palleted texture support for a small minority of games, but those can be run using your second system.

So far as 'late DOS' goes, it's fine as long as you know it won't sound quite the same as a period correct system - will you be linking the sound modules up to this too?

The S3 Virge is a great card for DOS gaming, for 3D less so. The millennium is fantastic for Windows and other graphical OS, but has issues with DOS game compatibility.

but I guess the dip package is not that after all but a "bus transceiver"?
so the other card posted also doesn't have one then?

LS245 is not an OPL3 clone it's a Bus Transceiver