I really wanted an ATX SS7 motherboard, so I recently got my hands on a DFI K6XV3+/66.
Since I already own an DFI P5BV3+ AT motherboard, which has been fast and rock solid (with just a few simple tweaks), I figured that I would have no issues with this one either... Boy, was I wrong!
This MB is a nightmare with nVidia AGP cards: constant freezes in OpenGL games, and even weirder behavior in DirectX titles (intermittent wobbly image in 3DMark2000, artifacts, etc).
So I dug a little deeper to see what was happening, and I remembered having VERY similar issues on the DFI P5BV3+ board (especially the wobbly image in 3DMark) until I disabled "AGP 2x mode". But, strangely, disabling AGP 2x was the first thing I did on the K6XV3+. So what gives?!
Well, I finally found the cause: the "Disable AGP 2x" setting in the BIOS has no effect. Both the nVidia driver and Aida64 show the AGP bus still running at 2X speed.
I tried flashing three different BIOS versions from 1999 / 2000 (including the latest version - K6XB0412.BIN) and they all have the same issue.
Anyway, it seems that this is not an isolated issue with this board's BIOS. For example, this is listed in the latest BIOS changelog: "2.When BIOS set COM2 to disable , in WIN-98 CAN detect COM2."

So, after doing many tests, it seems that there are only two options, both of which are bad:
1) Install a newer driver (like 45.23), which, together with the Coolbits reg tweak, gives you the option to force AGP 1x. This makes things 100% stable, unfortunately performance with such a driver is very bad, since it's optimized for much newer platforms/CPUs.
2) Stick with the fastest driver (7.76), which doesn't have the "force AGP 1x" option, and switch the AGP aperture to 4 MB in BIOS. Unfortunately, this also tanks performance (making it very similar to that of 45.23: 60+ FPS in Quake 2, down from 90+). Worst of all, it's still not 100% stable.

So before I dig deeper into the registry to see if I can find an option to force AGP 1x with the old driver, I thought it would be better to ask here first, maybe somebody has already found a workaround for this issue. 😀

Update: just remembered using PowerStrip back in the day, tried it now and it works! So I will do more tests and get back with a conclusion.

So, indeed, all issues are solved with PowerStrip. Forcing AGP 1x (with driver 7.76) makes things both fast and stable.
However, the downside is that PowerStrip needs to run in the background. Not a big deal, but it still bugs me. I tried various options to make the setting persistent, but so far it hasn't worked - the AGP bus switches to 1x mode after PowerStrip is started.

Another update: by chance, I discovered that if I don't install newer VIA4in1 drivers (I usually go with either v4.29 or v4.35), the drivers that come with Windows 98SE don't support AGP2x, so the bus speed is fixed at 1x. Because of this, things are stable, however performance with these default VIA drivers is very bad (probably lacking some newer optimizations).

If you are installing the VIAGART in turbo mode that is overriding your bios setting, then you use power strip to fix that. You can edit the entry in the registry to fix it and not require power strip to run in the back ground.
key: HKLM\System\CurrentControSet\Services\VxD\ViaGart
double click Turbo and make sure the string is 00 00 or 00 depending on version installed. that will disable AGP x 2.

I always install the VIA drivers in standard mode, not turbo (when dealing with SS7 boards). I checked and the value is in fact "00 00". Also, just to test, I reverted to AGP 2x and checked again the registry and the value is still 00 00.
So it seems that PowerStrip is controling the AGP2X/1X speed in some other way...

That's odd for sure, I wonder if it has anything to do with the NVidia drivers. I had issues with a TNT2 Pro on a pa-2013 with a 3+ 450, but the most reliable I found were the 44.03 drivers. Odd thing is I've moved on to a slot 1 P3 800 and in testing the same GPU, quake II OGL was faster with the 44.03 drivers compared to the 6.86. Now I didn't go off the deep end and bench a bunch of games either so I have no overall point of reference between the drivers and the performance variance between them.

No, it's definitely not a driver issue (well, not only a driver issue). The main issue is the BIOS, which should override any setting that a driver tries to change. On other boards like the P5BV3+, once you disable AGP 2X in the BIOS, you will never see it activated in the operating system, no matter what driver you install.
The second issue is probably with the VIA drivers. I will try and install some older drivers, even older than 4.29 and see if it makes a difference. I really dislike having PowerStrip running in the background 😀

Victory!!!
VIA 4in1 4.17 seems to be the ultimate driver for SS7 boards with AGP issues:
1. When installing the AGP driver in Normal mode (did not even test Turbo mode), it keeps the AGP speed to 1x - in fact, software like Aida64 only sees 1x as an option, it doesn't even see 2x as potentially being supported. PERFECT!
2. Performance is excellent - in my case, I gained 2 - 3 more FPS in Quake / Quake 2 when using this driver.

After testing it for the past day, I'm now confident that it's 100% stable, I had absolutely no issues!

PS: Because this driver is hard to find, I will attach it here so that anyone can test it.

Excellent glad to hear you got your system running stable. Also thank you for posting the driver I'm planning a ss7 build for the fall and that driver should come in handy.

You're welcome! Glad it will help others too 😀 Good luck with your SS7 build!

I really don't appreciate you finding a fix, now I'm feeling like pulling the pa-2013 back out and trying this driver now.

Nice! If you do, please report back! 😀

I'm very much looking forward to the build just wish I had the time now instead of waiting to the fall. I have all the parts just don't have the time sadly.

Nice! If you do, please report back! 😀

so, did you just use the installer, or did you also go into device manager and point to the inf for the agp driver? (nevermind), cant install driver from the agp folder.
Mine is on the bench already. can you give me some comparative info on your bios settings, especially the agp aperture size you are using. have had a couple of lockups with the Unreal loop. running q2 massive1 and crusher demos in loop and so far it's still going. Bud I did dumb down the settings in the bios for stability including reducing the agp aperture from32 to 4mb.

That's too bad... can you check with Everest/Aida32/Aida64, and make sure that you are on AGP 1x ?
Also, can you tell me what video card you are using? The lockups can also occur if you are on a power hungry video card (that's because many SS7 boards have an underpowered AGP). So my recommendation is to first try a GeForce 2 MX, because it has very low power requirements that should be supported by most (or all?) SS7 boards. I actually think the GeForce 2 MX/MX400 (the 128 bit versions) are the best cards for SS7 systems, especially because the hardware T&L (or more specifically, the "T"), will boost the performance in many titles, including Quake 2. Also, they have excellent DOS performance & compatibility (because why else would you build a SS7 system, if not for its "time machine" capabilities? 😀 )
Oh, and you could also have RAM issues (although lockups are less common with RAM problems, the usual behavior is BSOD). Did you try multiple RAM modules?
Many things need to come together on a SS7 platform to make it stable. That's why I love playing with them and debugging all problems 😁

My current AGP aperture size is 64 MB (the default). But if it helps, check the screenshots below, you can see all the important BIOS settings that I currently have. 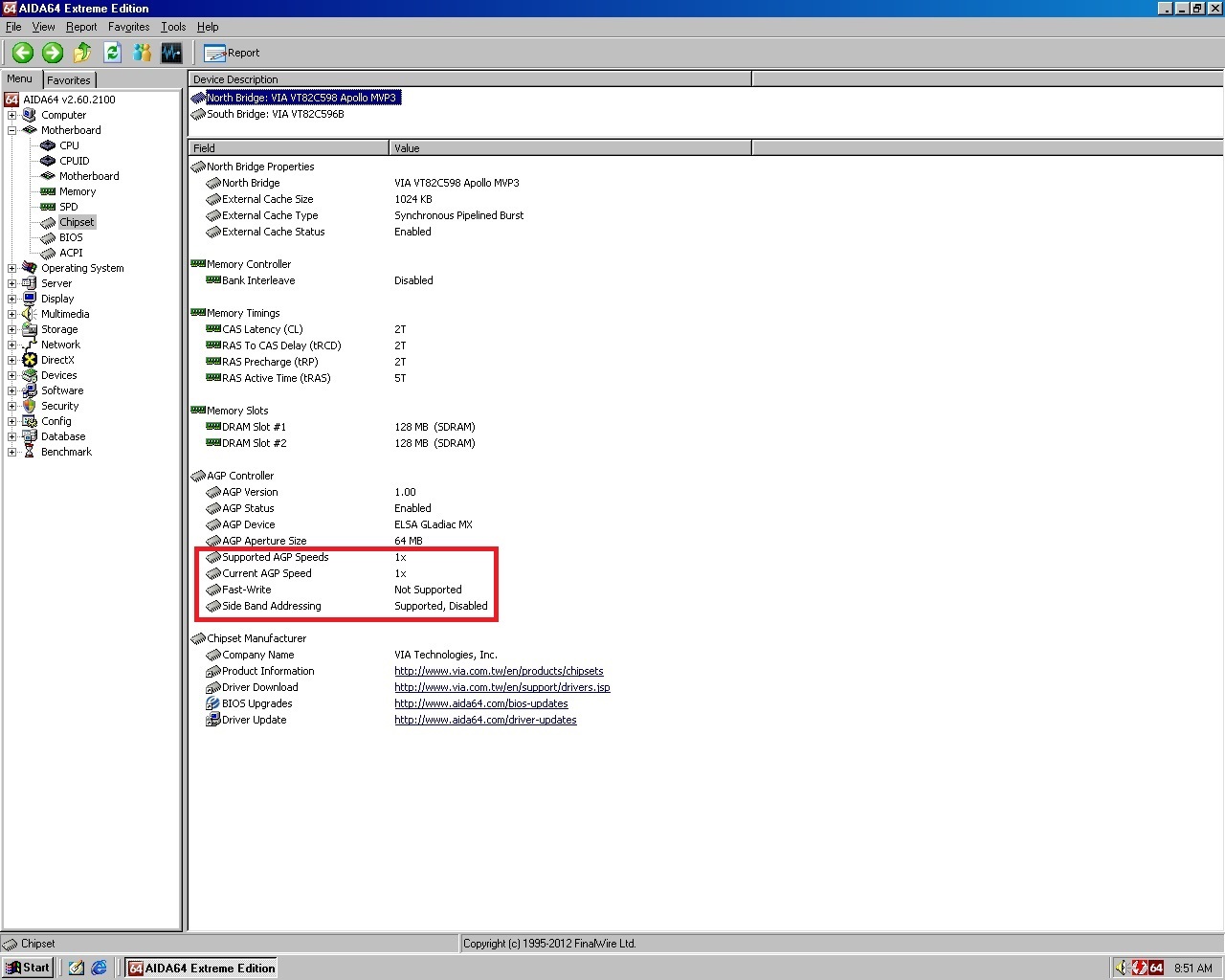 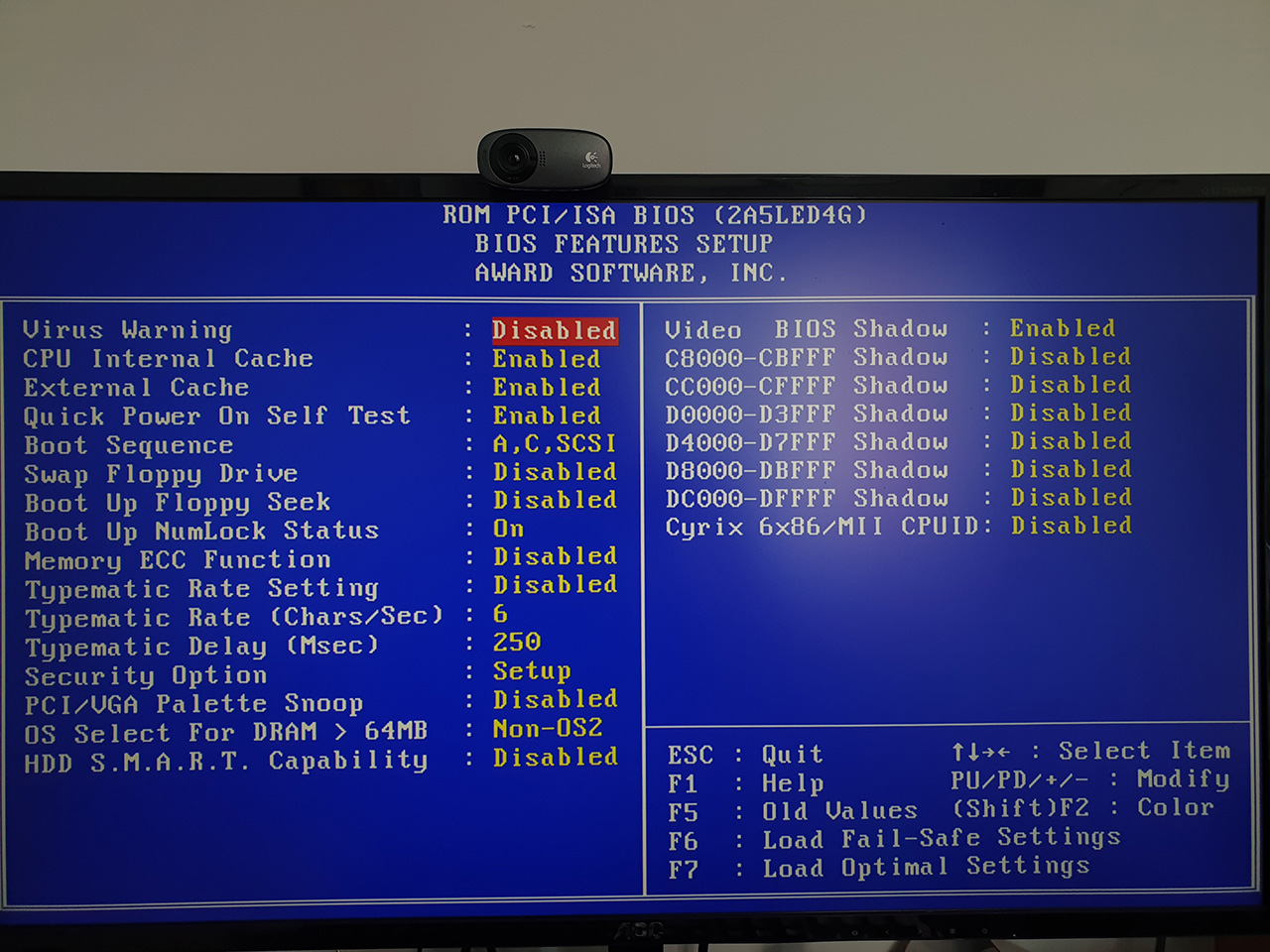 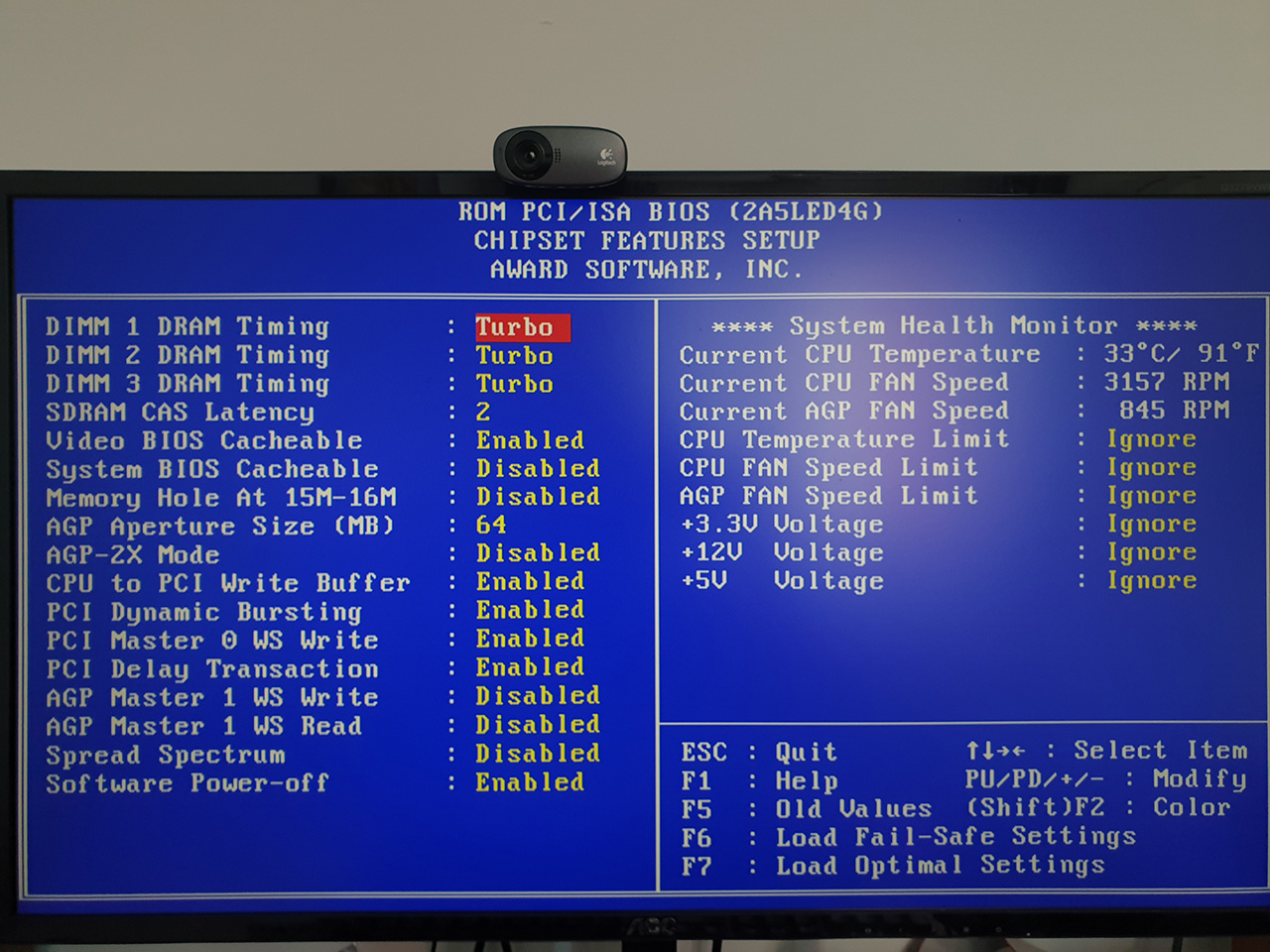 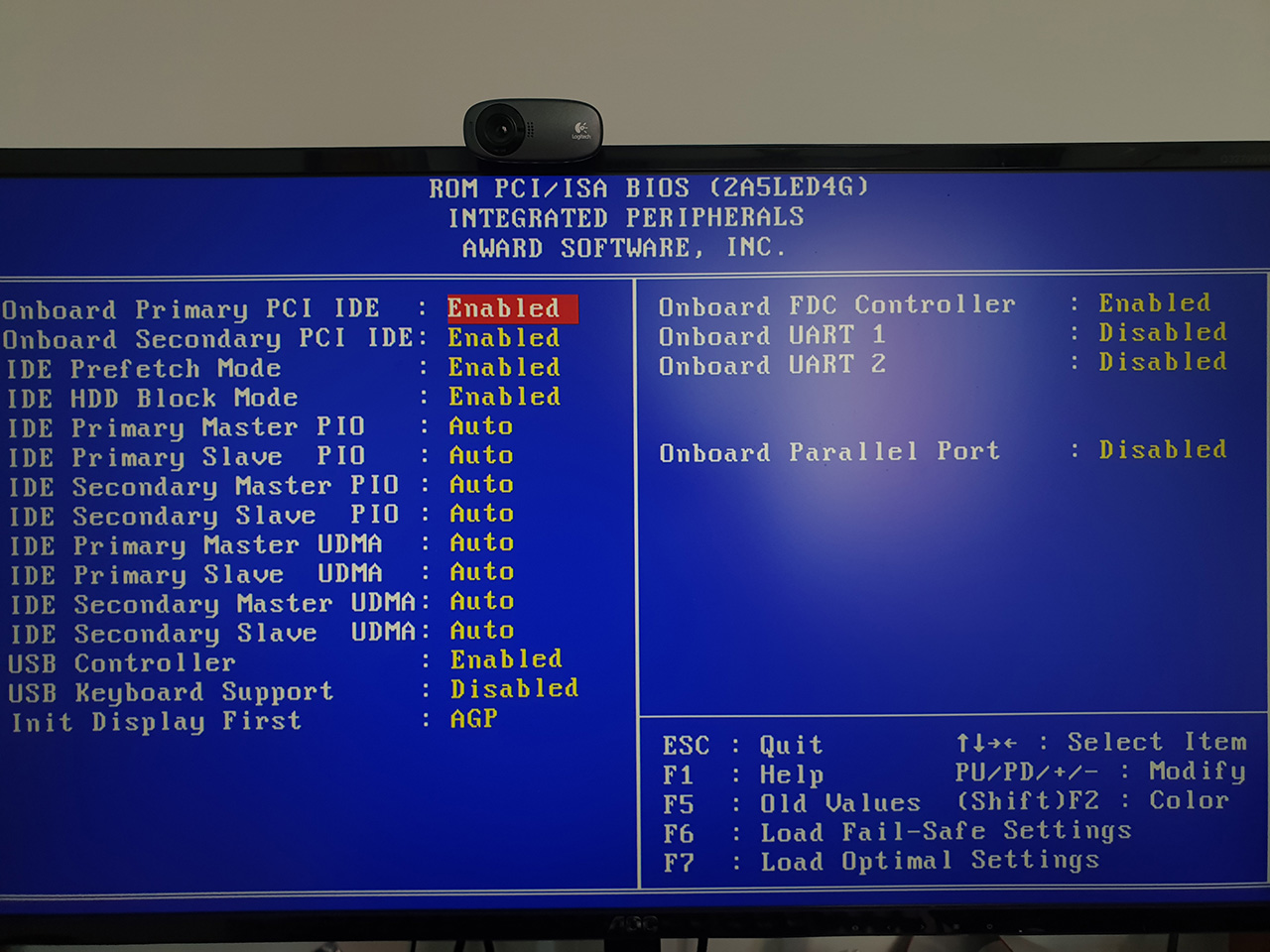