So i have seen quite a few people making retro builds with dual pentiums.
Dual core was supported more towards half of the windows xp era.

So far i have seen pictures of people building a a dual Pentium1 socket7 build for example with a Soyo 5th5 motherboard.
ANd i have also seen Dual pentium 3 boards socket 370, even on youtube you can see people building those.
And also dual Pentium2 or pentium3 slot1 boards taken from server machines and they build a pc with that.

But what is the purpose of building such machines? just cosmetics to show something that is not common for home use?
or is there a real benefit of building that for playing DOS, Windows3.1 and windows98 games?

I know dual CPU motherboards are kind of rare, i don´t see them very often online, but are those really worth it?

For retro gaming, a dual Pentium or Pentium 3 board is absolutely pointless, versus a single CPU board, IMHO .

By the time game software that could make use of multiple cores or CPUs was out in numbers, CPU performance had move well beyond the capabilities of even the latest Pentium 3 CPUs. Having two Pentium 3 CPU, would not have helped much .

There are bound to be some exceptions (games that are both usable on a Pentium 3 and that actually benefit from a second CPU or core), but other than possibly Quake 3, I can't think of any off the top of my head .

EDIT: Windows 9x and DOS (and software running under them) do not make use of multiple CPUs or cores .

I personally love dual cpu systems. They may not be "practical" but there fun to build and play around with. They make great bases for windows NT 4, 2000, and XP. Even if games can't make use of the 2nd cpu windows still does and it does help with performance a little as well

Bragging rights. People who get them hold onto them so it's harder and harder to build such a system. It's a great collector's item.

Well, if you run an OS that supports more than one CPU core, then you do gain some performance even with single threaded games because there is a second core to handle background stuff instead of the single CPU having to task switch constantly.

Super easy to do a comparison as you can just remove a single CPU so you are testing on the same exact system and not having to think about performance differences between different hardware combinations.

There is very little in terms of a performance increase with dual socket boards. Although, you probably go and fiddle with the CPU affinity, but the improvements will still be marginal at best.

The real reason why people (or at least myself) build with dual socket boards, is simply 2 > 1.
And that is pretty much it.

For some people, hardware > software.

...but are those really worth it?

Nothing is really worth it... it's just old junk 🤣

yea i guess its nice to build a retro pc with side panel window and show a dual cpu retro machine. Something strange to see and that is not common.
you just need to find 2 good looking and matching heatsinks haha

There is very little in terms of a performance increase with dual socket boards. Although, you probably go and fiddle with the CPU affinity, but the improvements will still be marginal at best.

Performance increase in a (single-threaded) game will be marginal to zero. The first - and for a long time only -SMP-capable game was Quake 3 Arena, and even that would run better on an AthlonXP or P4 than on any dual P3. However responsiveness in desktop/multitasking situations is massively improved. OS boots significantly faster too (assuming your I/O isn't a huge period-correct bottleneck). I still remember getting my first dual system running, an Asus P2B-DS, with 2x P2-400. This was around 2002 and my main system was an AthlonXP of some description (1800+ Tbred B iirc). There was no doubt the AthlonXP was vastly faster in any game - but just for running a desktop, the dual P2-400 was more responsive.

Hell yeah. But there's also software > games. Consider that most games were still firmly single-threaded when dual core CPUs became mainstream (~2004). Still they came to dominate the market well before games caught up. That wasn't just marketing and showoff-factor. A system with a dual-core CPU simply is much nicer to work on - and that applied to older CPUs as well. Also, if you compiled kernels, or anything else for that matter, or ran Photoshop or other heavy duty applications, you really did use the cores/CPUs.

The thing is, what retro gamers do is not the same as what people back then did on their systems. For retro gamers wanting to run Windows 98 or DOS on fast systems that in the day would never have seen anything older than XP (and that only because Vista sucked), it's completely pointless as they don't use the extra cores/CPUs. But when building a period-correct system, with a period-correct SMP-aware OS, you can at the very least feel the difference before you start up that game.

I'm currently tinkering with a dual P3-933 system with 1GB of RDRAM. I received it with Windows XP installed, which is probably objectively the best Windows OS to run on it. However for nostalgia's sake I'm going to downgrade to Windows 2000. That system is a beast with an U160 SCSI controller and 10k rpm Quantum Atlas V drive. The drive removes I/O bottleneck, which helps the CPUs boot the OS faster than I've ever seen, even on systems with three times the clock speed.

Will this system play games better than my single-CPU P3-1400S system? Nope. But there's more to life than just games 😀

yea i guess its nice to build a retro pc with side panel window and show a dual cpu retro machine. Something strange to see and that is not common.
you just need to find 2 good looking and matching heatsinks haha 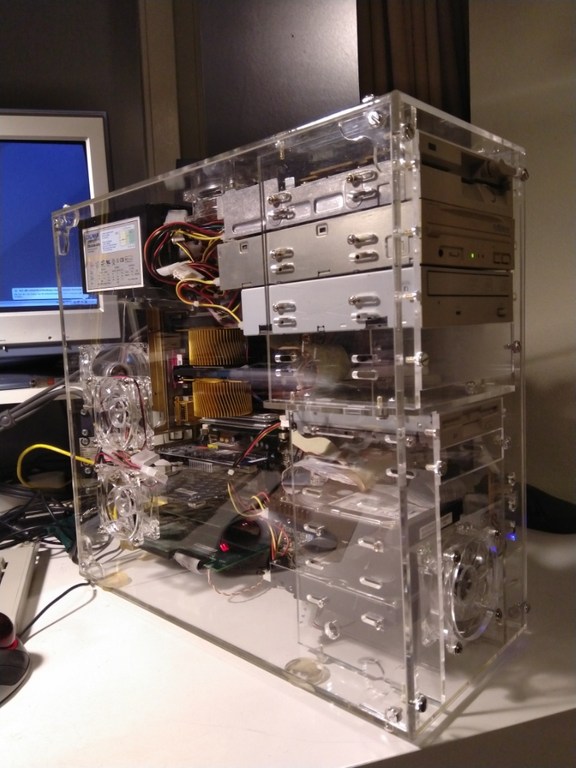 Like others have said, there is nothing wrong with having dual CPUs in a retro machine, as long as you don't expect anything significant from the second CPU, performance wise (and only when runnin Windows 2000 or higher).

If you already have the hardware, why not use it. If you need to put money into it, consider that this money might be better spent on a better video card or faster single processor, assuming the primary end-goal is gaming performance .

It's usually counterproductive to use such boards. They don't overclock much and might not have AGP and/or ISA slot. Some early boards can have both, but good luck using Coppermine core on them.

Why? I have dual P3-733 with both AGP and ISA (Tyan board). Currently it runs XP and Premiere video editor (only SD, of course).

Bragging rights, fun computing, you name it! They have very little value for retro gaming, but for a lot of us there is value and joy in building exotic systems, especially those of us who have "seen everything".
Pentiums and Athlons are nice, but sometimes you gotta try that Via C3 or dual CPU build 😀.

They look cool. Not biased at all. They can make for pretty competent early 2000's XP machines in the case of the P3's though there are more cases than I'd like where they're missing some of the instructions that P4's have.

It's usually counterproductive to use such boards. They don't overclock much and might not have AGP and/or ISA slot. Some early boards can have both, but good luck using Coppermine core on them.

ISA slot's not very relevant, as basically anything that needs ISA (DOS...) doesn't support SMP anyway. As for AGP - take a look at that pic I posted: beautiful 4x AGP Pro slot, with two P3-933EB Coppermines above it.

Only old FX, LX, GX and (some) BX chipset boards will lack CuMine support, the commonest dual P3 boards are Via 694D boards and they all support CuMine and have AGP too. Only some Serverworks chipsets (the awful IIILE) tend to lack AGP, and ancient (and rare) FX chipset boards.

If you just grab the first dual P3 you find, it will probably run CuMine, have AGP 4x and only lack ISA, which once again isn't relevant for SMP-aware OSs.

This all brings us back to the question of what the OP actually wants to do with his eventual retro machine build(s) (what era of software, what OS(es))

Depending on the answer to that question, having a multi-CPU SMP setup can

Planning a build with a clear set of objectives saves time, money and disappointments .
Trying to build something just to see where it will lead you can be expensive and not all the productive but still a lot of fun .

Personally, I don't see any practical point in building Pentium 3 for retrogaming, if it doesn't have ISA. Why even bother? Pentium 4/Athlon XP platform is better for everything.

For gaming on Dos/Win3.1/Win9x, no benefit of course.

Some games like Quake3 can take advantage of multiple processors on WinNT, Win2K, or Linux.

Also a lot of people like to use their retro systems for things other than gaming. Some like to try and do modern activities like browse the web, ect. Multiple cores make WinNT, Win2K, or Linux much more usable.