MB: ASUS 486SVGOX4 ver 1.5
CPU: Intel 486 DX4-100 (added a cooler w/ fan, even though it works very well in passive mode too, with temps between 40 - 50C. With the cooler it stays at 20 - 25C, depending on room temperature)
RAM: 32 MB FPM 60ns non-parity (overkill, I know)
VGA: ARK Logic ARK1000PV VLB 2 MB (nothing special, but did not notice any compatibility issues during my tests)
Sound: Creative Sound Blaster 16 CT2290
IDE Controller: unidentified Winbond W83757AF based VLB card
Storage: SD to IDE with 2 GB SanDisk Ultra card
PSU: 200W Enhance Electronics (a very high quality PSU, which even has fan speed control based on temperature - I didn't even know this was a thing back then. Of course, I replaced all capacitors with new Nichicon & Panasonic low-ESR caps, even though the original Nippon Chemi-Con caps were still in top shape)
OS: DOS 6.22 + Win 3.11 (also tested Win95 and it works surprisingly well, but I feel like the DOS + Win 3.11 combo is just... cool)

For the most part, things went smoothly. The biggest issues that I had were related to the VLB IDE controller (intermittent file corruption). I tried two almost-period correct 1 GB/2 GB disks, tried an SD to IDE adapter - same issue with all. Also tried various geometry settings and nothing worked. Eventually I realized that the problem was related to LBA (seems that this controller is buggy in LBA mode). So I settled for the LARGE addressing method and the corruption problems have disappeared. Because the PC is also dead silent, I just gave up on full period-correctness and went with the SD to IDE adapter option (these old HDDs are unusable when it comes to noise).

I'm still debating weather to keep the SB16 CT2290 (which is 'cooler'), or stick to a good ol' non-PNP ESS ES1688 card, which, in my opinion, is much better in every way (+ ESFM does not bother me at all, I really like it).
I was still unable to make the CD-ROM work with the SB16 IDE connector (yes, it's IDE, not a proprietary Panasonic/Mitsumi/Creative connector). I'm guessing I need some drivers besides the normal sbbasic pack, but didn't have time to look further into it.

If anyone has any suggestions/recommendations, let me know. 😀 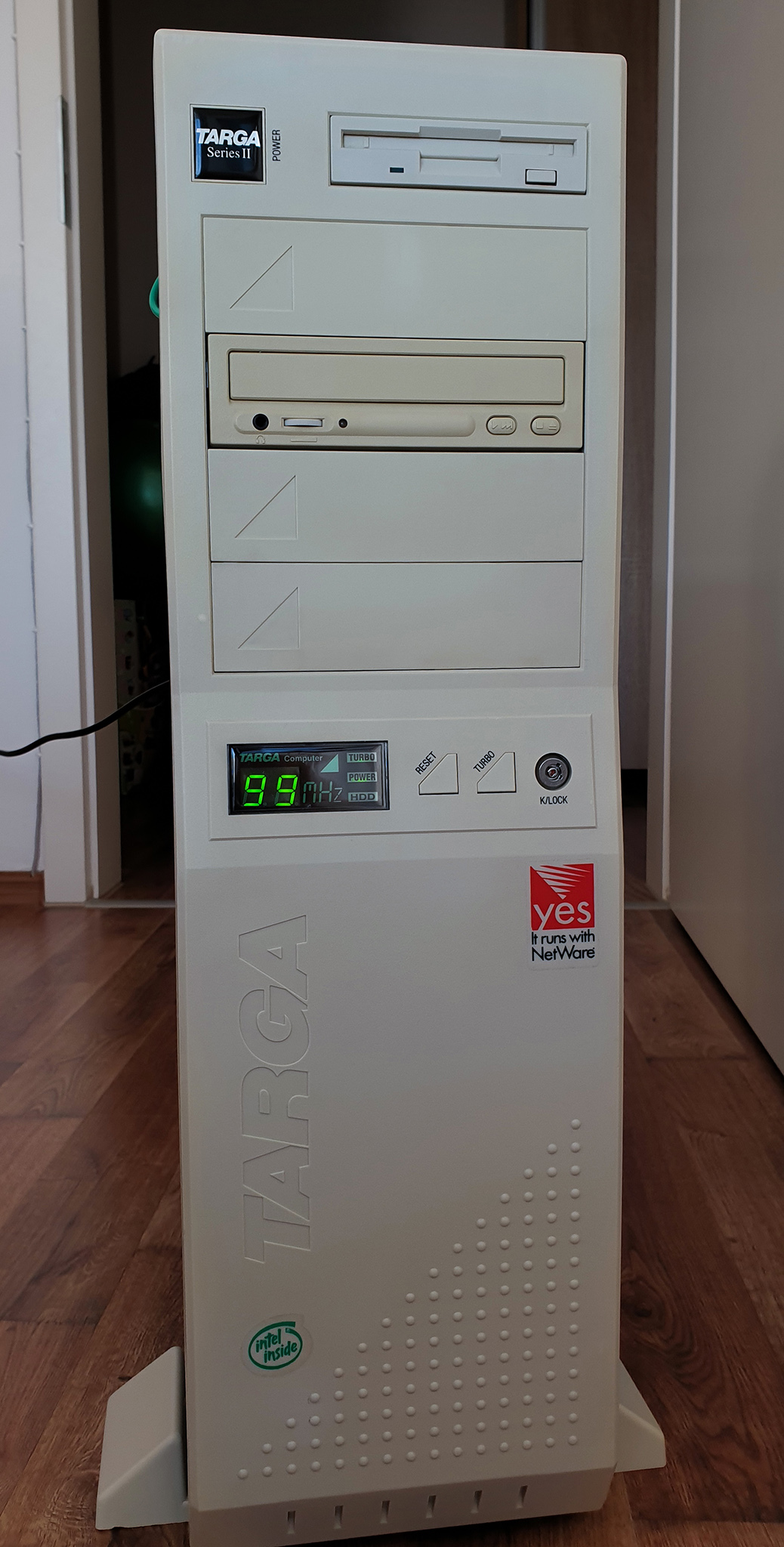 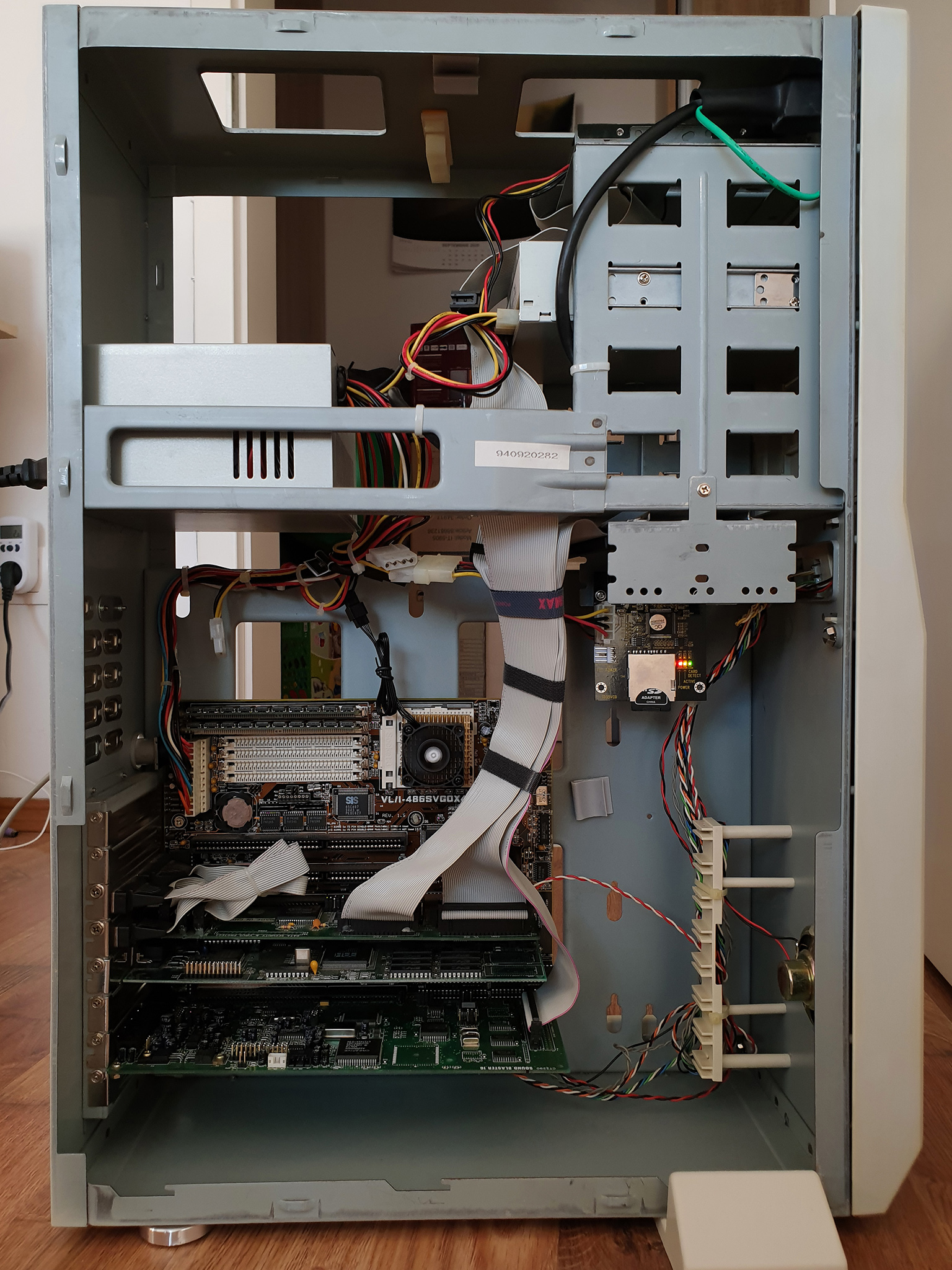 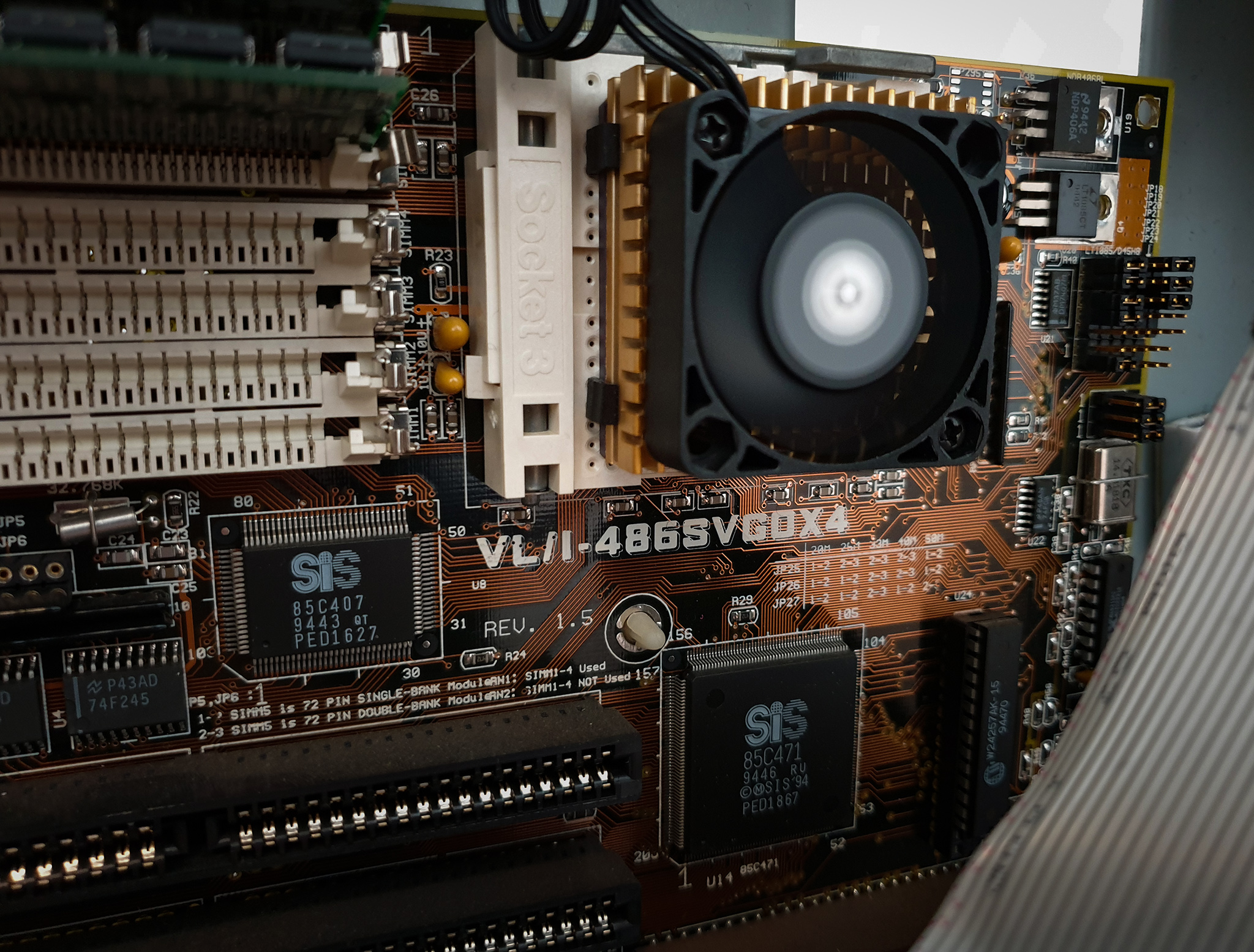 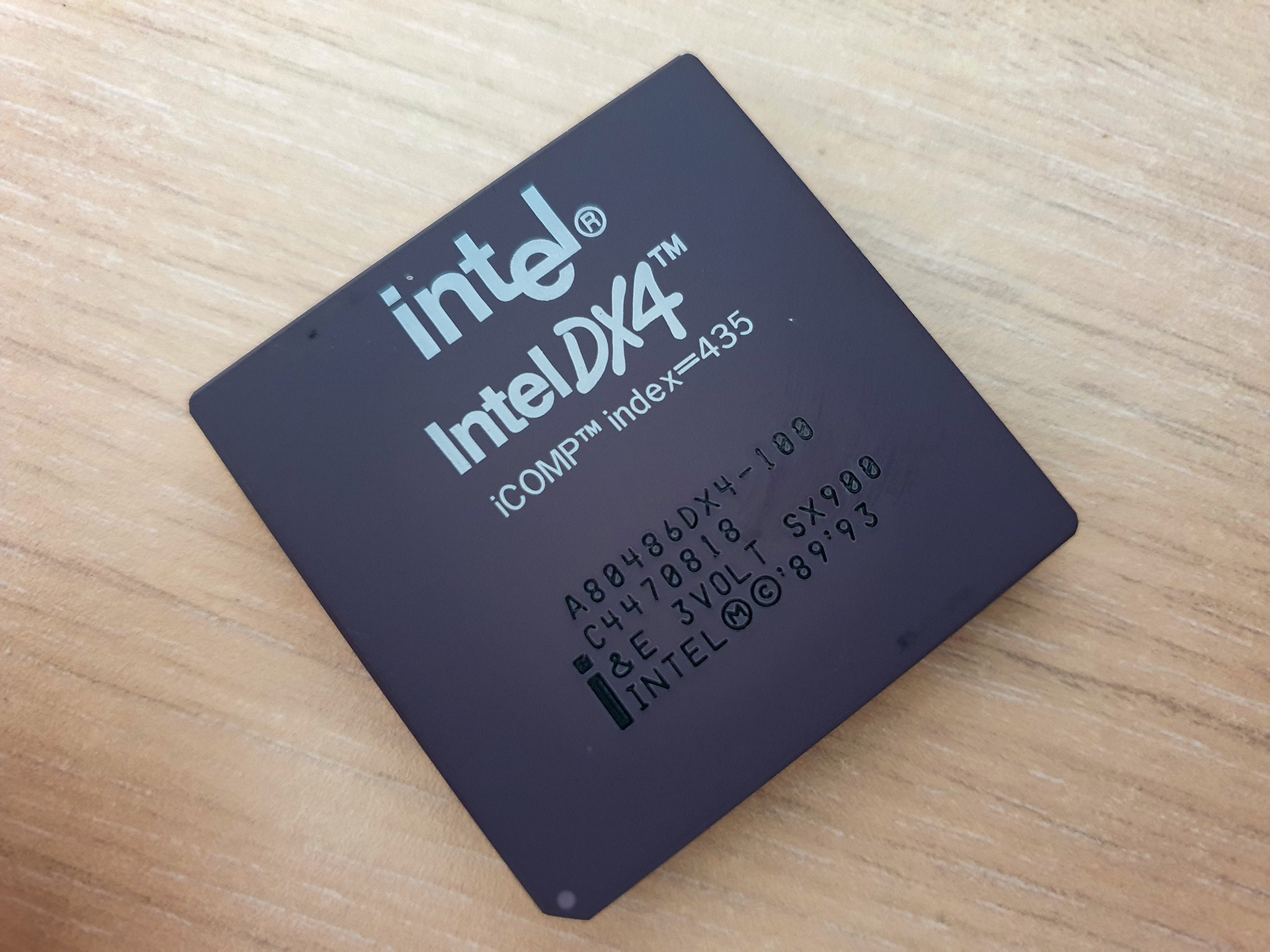 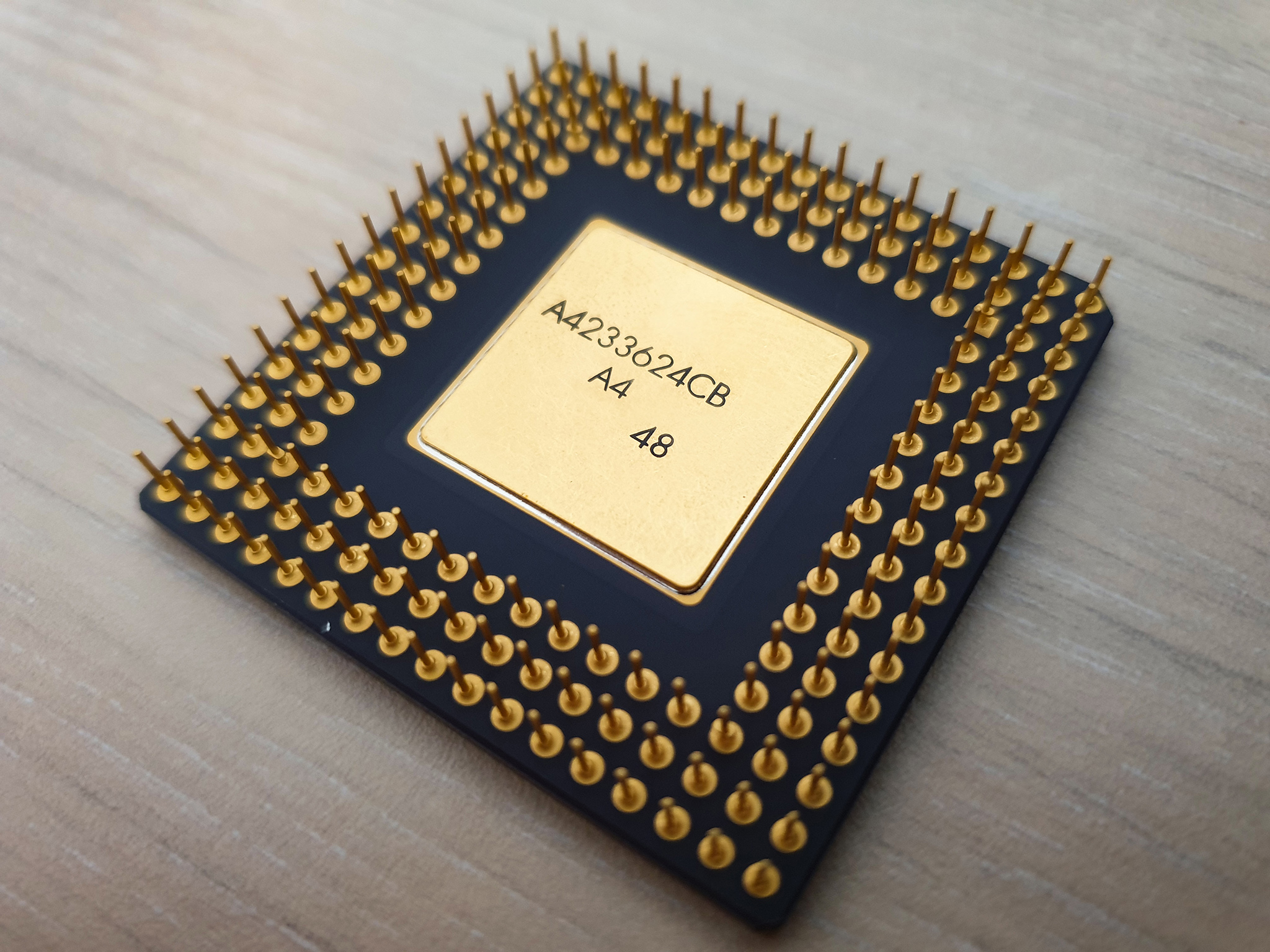 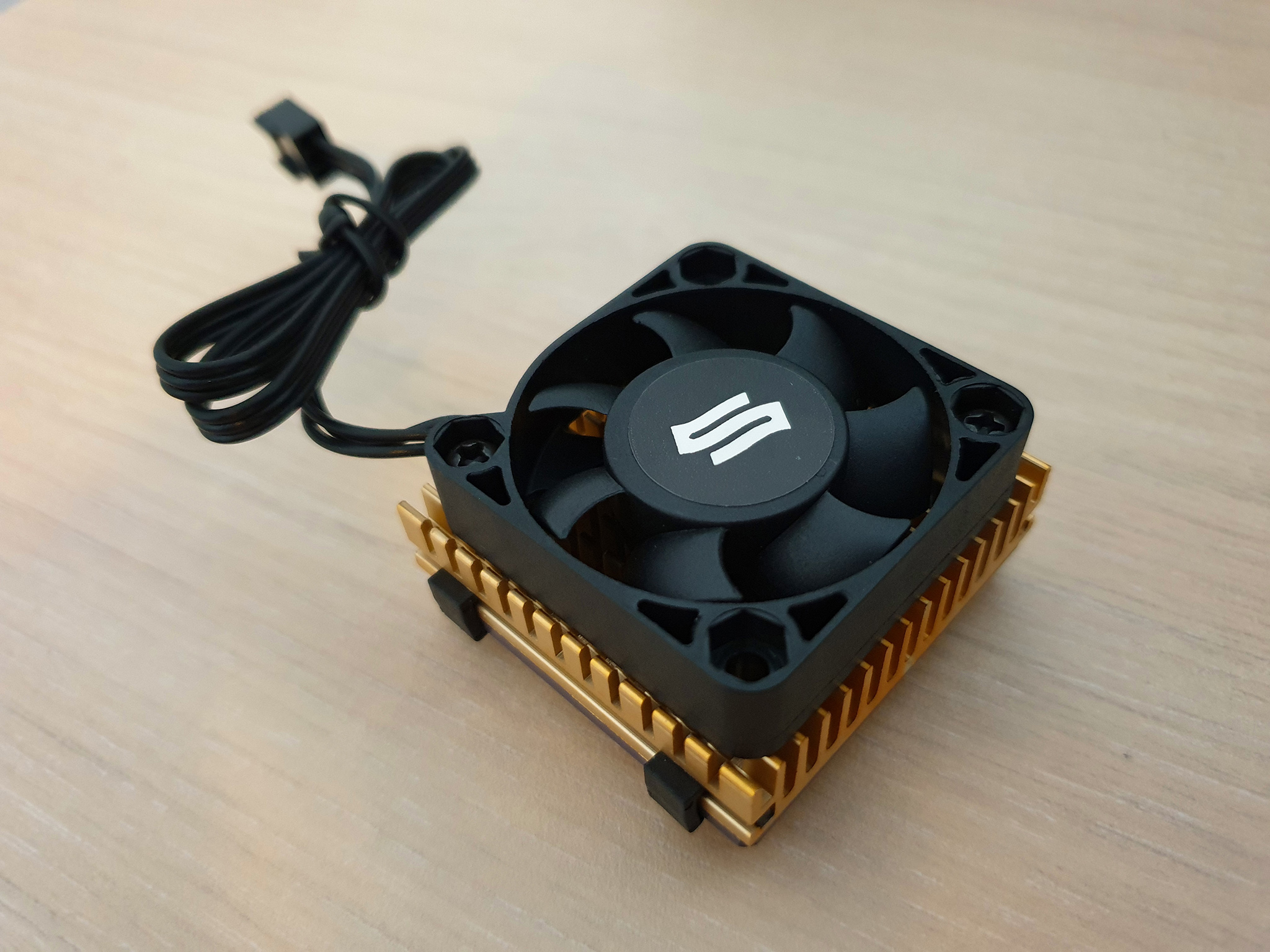 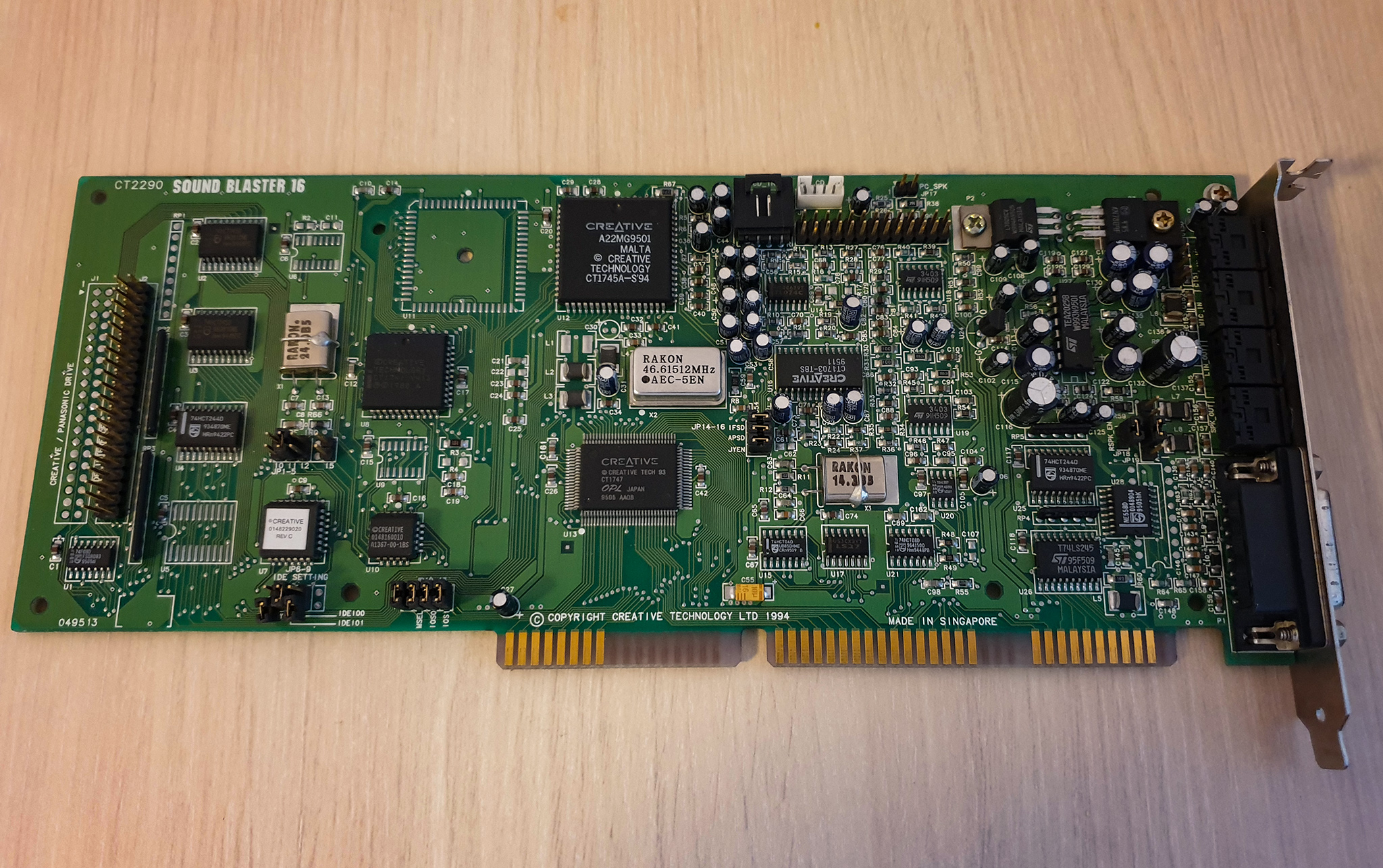 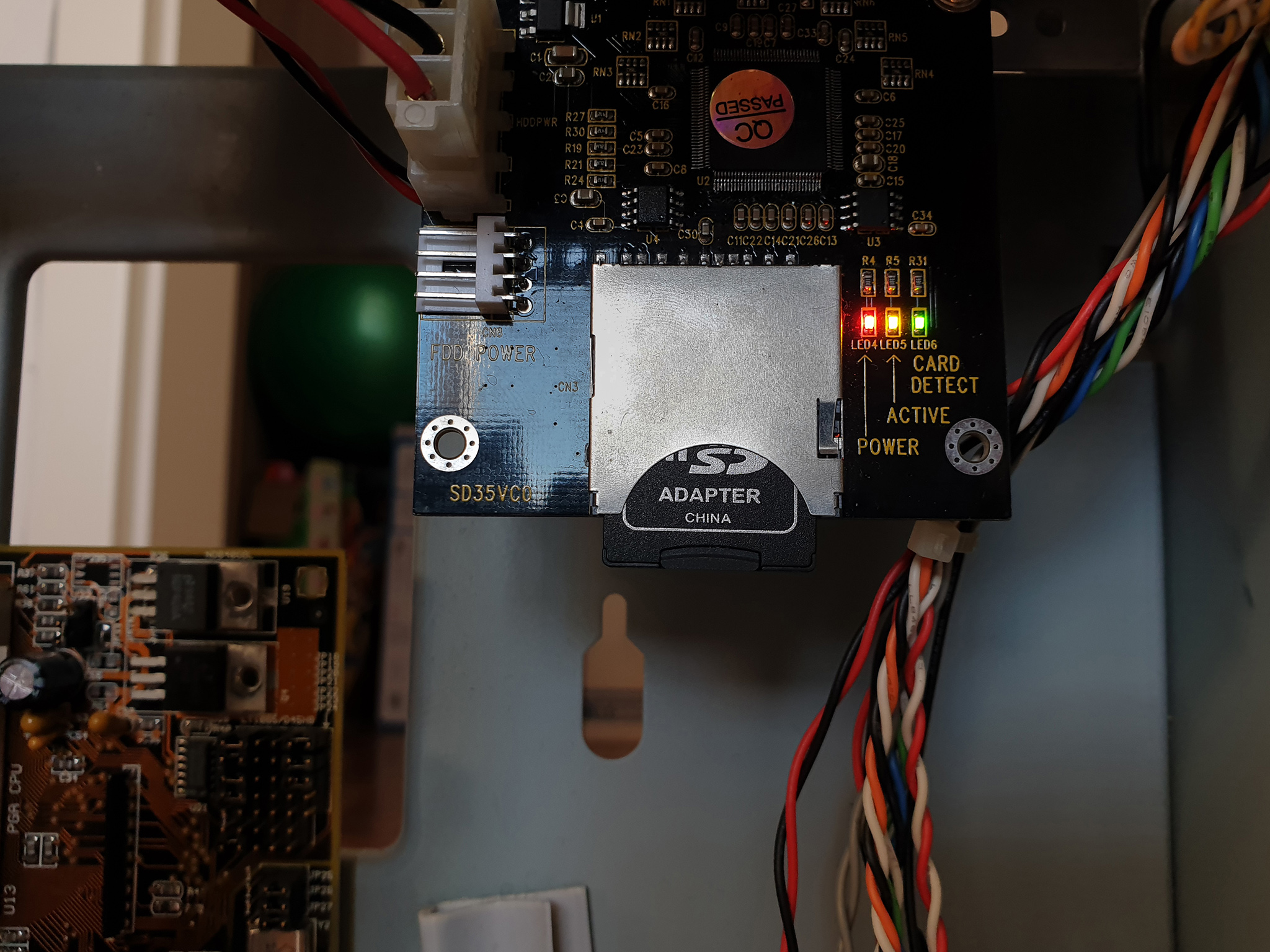 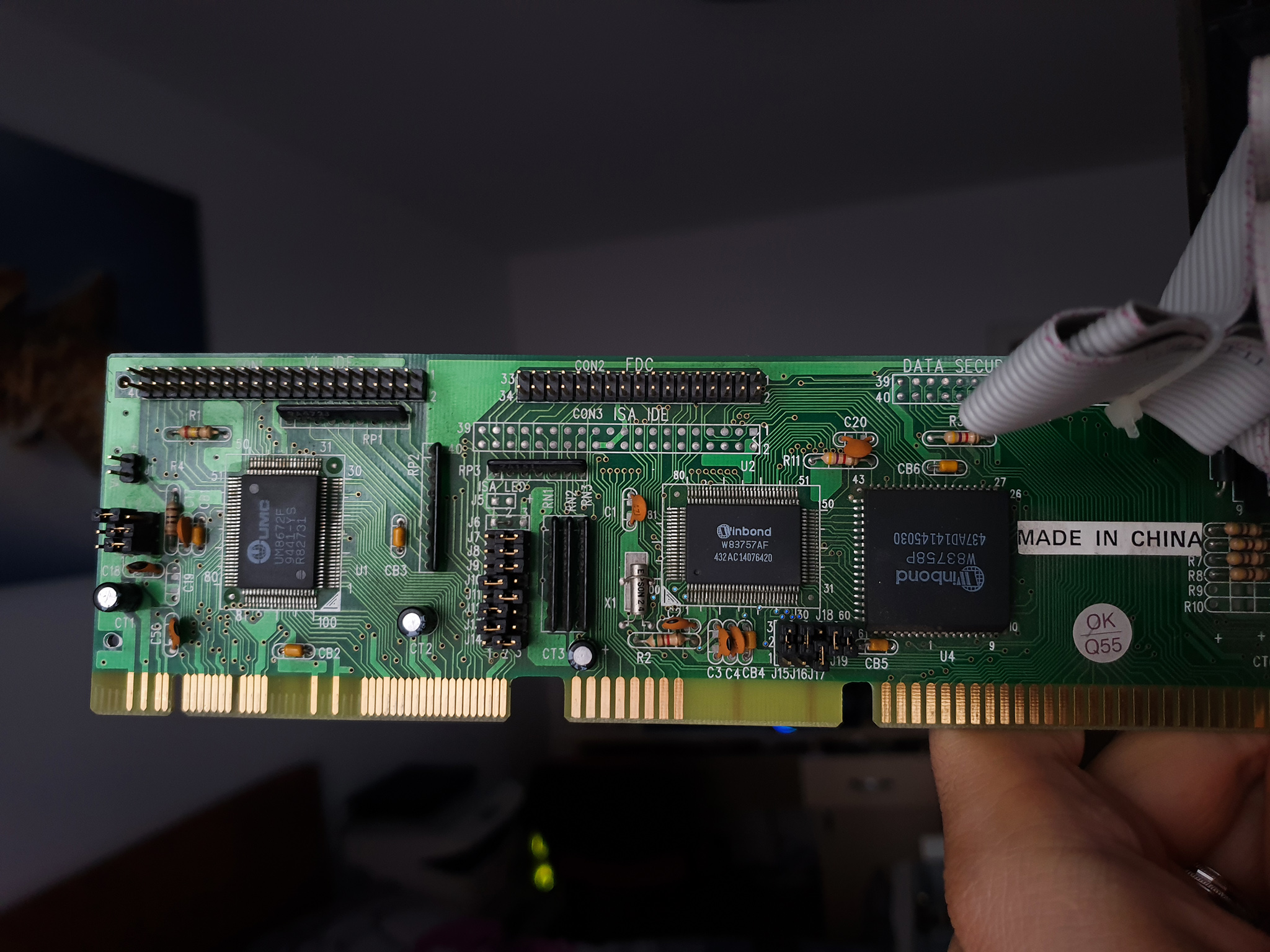 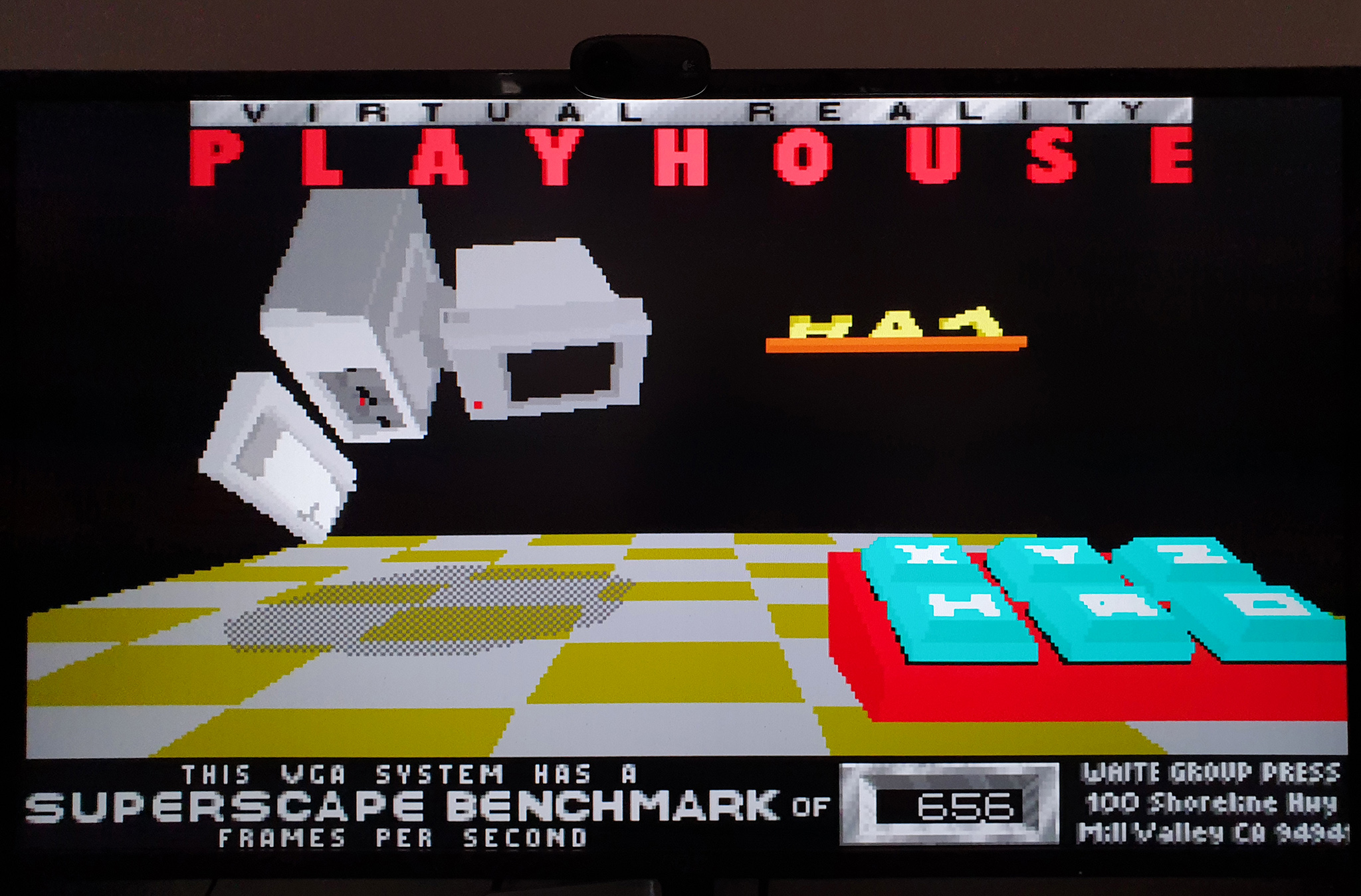 What a great photostory and mint condition of parts!

Great Rig 😀
I also love silent computers, but for my vintage builds I love the rustle and crackle of this old drives - makes the build more authentic.
But I also understand if you discard them, after all this wear and tear such old drives are error prone ...

What a great photostory and mint condition of parts!

Great Rig 😀
I also love silent computers, but for my vintage builds I love the rustle and crackle of this old drives - makes the build more authentic.
But I also understand if you discard them, after all this wear and tear such old drives are error prone ...

Glad you like it 😀 I don't have a problem with potential errors. I have enough old disks that are still in great condition and even if one of them fails I can quickly replace it.
However, I felt sorry for this PC - the PSU is dead silent, the CPU fan also dead silent... A 25 year old HDD would have killed the silence 😁 I do have others which are noisier and are also paired with old HDDs (if I want to get the full authentic experience) 😁

Thanks! I have two others with the AMD 5x86 (on the Zida 4DPS & Biostar MB-8433UUD motherboards) 😁
Also have an Intel 486 DX2-66 on another VLB motherboard (the Aopen Vi15G), which I will put in a case at some point in the future (if/when I find another nice case).

I finally gave up on the SB16 IDE connector. No matter what I tried, it didn't work and the CD ROM driver would freeze during loading (I tried two different SB16 sound cards, same issue).
So I just moved the CD-ROM drive on the lower bay and used one IDE cable to connect both the SD-to-IDE adapter (master) and the CD-ROM (slave). Everything works perfectly now. 😀

I finally gave up on the SB16 IDE connector.

Are you sure that it is an IDE-Interface?
Most old Sound Blaster Pro cards feature a proprietary interface for a Panasonic (Matsushita MKE) drive (e.g. for a "Panasonic CR-652-B" CD drive).
I just looks like IDE but works differently.

It says 'IDE INTERFACE' next to the connector.😉 The solder spots for the Creative/Panasonic connector are not populated.

When reading I thought nah I can't do that silent PC's creep me out, but then when I saw you'll still get the FDD boot sound the creepy factor is no longer an issue by my own standards and quite the achievement when you think how noisy HDD's and PSUs were in the day.

Love that case, that display is so classy and even Netware ready, another retro throwback
Overall nice tidy build.

Re CD off the soundcard, Common things are ensuring the the IDE port is actually enabled on the card plus often switches needed adding to config sys to tell the driver to look for the drive on the soundcard rather then IDE controller.
But whatever, its messy, I prefer the simplicity of running as a slave myself it its an option.

Re soundcard, going off your signature you have other Socket 3 PC's so I'd chose the "other" soundcard if they have Creative I'd go with ESS in this build, keeps things different 😀

The IDE port on the Sound Blaster card is usually set to tertiary port so as to not conflict with the primary and secondary ports that may exist on the motherboard. Assuming you don't need to initialize the IDE port on the sound card through a separate utility, you can specify that the CD-ROM device driver look to the tertiary port on the command line. For example, if you're using OAKCDROM.SYS, use:

You can experiment with the ports using the common values for parallel ATA:

1F0 is likely your primary IDE on the VLB card and 170 would be the secondary IDE if it had one. Most DOS CD-ROM device drivers support the /P switch to specify a port. If yours doesn't, you may want to try a different device driver.

Thank you chinny22 and OzzFan for the suggestions. I will try them on another socket 3 build whenever I get the chance!

Yes, I do have other socket 3 builds as I mentioned in a previous post, one of them actually has a Sound Blaster Pro 2 and the other one an Aztech Multimedia Pro 16 IIB-3D. If/when I do another socker 3 build (with a 486 DX2-66), I will use an ESS card for sure 😀

VGA: ARK Logic ARK1000PV VLB 2 MB (nothing special, but did not notice any compatibility issues during my tests)

Update: Well, it turns out that, apparently, this card is special and I didn't even know it. According to CPU Galaxy, it's one of the fastest VLB cards if not THE fastest (even faster than Tseng ET4000).

I have a similar build.
32mb might be to much for DOS but not for 3.x
Win3x can use that memory no problem.
The problem I had with my VLB controller was supporting large hard-drives. The driver for the VLB controller will only support up 410mb hard-drive. If I used a larger capacity hard-drive the driver would report an error and only run at 16-bit mode and not 32-bit mode.
So slower data transfer rates. But it still runs fast enough for DOS and Win3x.
Win3x VLB driver would report an error to an only run at 16-bit mode.

So the VLB card is useless in 32-bit mode if you use a hard-drive larger than 410mb.
I don’t know how the driver would react to an SD card however.

Did your VLB controller report any errors with the SD card ?
Anyways it should run fast enough even if the SD card is running in 16-bit mode.

Lovely, clean box you've got going here!
I ought to strip-clean my systems one of these days myself.
32MB is pretty much ideal for DOS on a 486 IMO, you can set up huge caches or play games that need lots of EMS memory.

Well, to tell you the truth, I have no idea if it currently runs in 16 or 32 bit mode. I usually only try and fix if there is an actual performance issue worth fixing. 😀
In this case, the storage performance is so good, that, once I fixed the disk corruption problems, I did not give it a second thought. And I didn't even run any benchmarks, but the thing is so snappy that everything loads instantly 😀
DOS boots in a few seconds (and there are quite a few things that I load in config.sys/autoexec.bat - like the sound/mouse/cd rom drivers). Same with Windows 3.11... I just type "win" and I'm already at the desktop. 😀

Did your VLB controller report any errors with the SD card ?
Anyways it should run fast enough even if the SD card is running in 16-bit mode.

No errors at all. It just refuses to work properly in LBA mode with any disk - period correct or not. I could have probably fixed it with a DDO, but I was lazy and went with LARGE mode instead, which works great.

I now upgraded the L2 cache to 512KB, and the speed with a disabled L1 cache has increased significantly - 15.6 FPS in 3DBench 1.0c, up from 10 FPS before, which is now deep into 386 DX-40 territory (not something I particularly like).
However, I just realized that I did not test with L1 cache disabled + turbo off, I imagine it should be slower (hopefully not too slow). Unfortunately the PC is already in storage, but I'll definitely need to test this in the future.

Lovely, clean box you've got going here!
I ought to strip-clean my systems one of these days myself.
32MB is pretty much ideal for DOS on a 486 IMO, you can set up huge caches or play games that need lots of EMS memory.

Windows 3.1x 32-bit Disk Access was an early attempt to move away from expensive context transfers using the system BIOS. At the time it was written, Microsoft had the driver working with "BigDOS" compatible drives ( < 504MiB ). The driver didn't support Large or LBA type drives required for larger drives. There are software drivers from both Maxtor and Western Digital to provide 32-bit Disk Access to drives > 504MiB (this is not the same as disk overlay software).

The Maxtor driver works quite well with drives from Connor, Seagate, and Quantum. I generally don't use Western Digital, but they may work with the driver too or you can find their driver instead.