Microsoft Adventure from a 3.5" floppy

Hello I recently wanted to try to play Microsoft Adventure, the IBM PC version and I found a copy of it online it said the disk was unprotected and ready to copy and play.
I loaded it up in an Emulator (PCem emulating a Pentium 1) and it worked fine, but I want to play it on real hardware so I wrote the floppy image to a 3.5" floppy using rawwritewin-0.7
And hope the game would just work from that.
the game actually boots from the floppy (on my retro machine with an actual Pentium 1) and shows a screen saying:
Loading...

And the floppy reads for a bit but it never progresses any further.
Is it possible to make the game work from a 3.5" floppy because the game was originally released on a 5.25" floppy.
and the image of the game works since it worked in the emulator.

The image is 180kB and is there a reason why shouldn't it work on a 1.44MB floppy?
is the sector size different or something?

yes. you cant write different sized images to disks like that.

yes. you cant write different sized images to disks like that.

Hmm but it's strange that the game does not start properly.

It is very likely that game is speed sensitive and will not work on a computer as fast as your Pentium 1.

An emulator is not necessarily going to behave the same as real hardware.

You can try disabling the L1 and L2 cache on your system through the BIOS and see if that makes it work.

It could also have something to do with writing the smaller image to a larger disk but I would try slowing down your system first.

Edit: it might actually completely have to do with the disk image. See here:
https://forum.vcfed.org/index.php?threads/old … py-images.50388

I fixed it by using the included copy tool to write the small disk image to a virtual 1.44 3,5" disk image
and than writing that image to my real floppy. 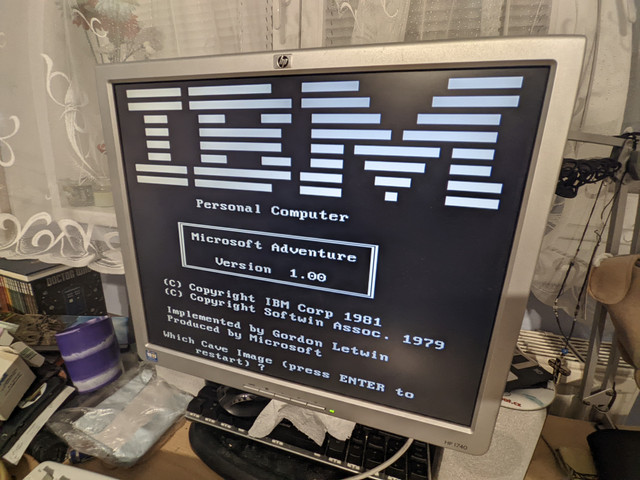 glad you got it working!

if you need help 😉 come over to

Thanks! Looking forward to beating it.