I have a voodoo 5 5500 AGP which has been in a P3 800 system for many, many years now without any issues at all. I reached that point where i was simply playing games instead of chasing hardware....

Until I stumbled on an old industrial PC with a P3 1000EB going for free. My ASUS cusl2-c board can handle this beast with a Bios update so I decided to upgrade 😀
All is good, everything works but i noticed in testing that one of the Aavid fans on the Voodoo 5 consistently stops running after a couple of minutes!

My first thought was one of panic and many many hours of searching for hardware replacements - like the 'good old' days of this retro computing rabbit hole. I find that there are many compatible heat-sink and fan combos that I can buy (assuming that I risk the freeze, credit card and screwdriver procedure). However I find that when I remove the fans from the card, the rear heat-sink has far less dust suggesting that this fan failure has not been a recent phenomenon.

Did I just get lucky, or can I just run the card with the heat sinks and good airflow within the case?

What are your experiences?

in my experience the fans are absolutely needed as the VSA chips do get hot
they probably don't get hot enough so they die but they are old chips and heat is never good for them - so a good airflow will prolong their life
in other words: put some fans back there 😁

do u really want to chance it burning up when these cards sell for as much as they do.

i would say either get a new original fan or replace the fans with a nice noctua fan of the same size.

Noctua has suitable 5v fans:
https://noctua.at/en/products/fan?size=2645&voltage=5
I'd go for the faster version with higher static pressure.

Baby-poop brown sure.
But quiet and extremely high quality.

These chips need a lot of cooling. If your case airflow is good, you can contemplate passive cooling, but that would require a much larger heatsink than the default ones. If you don't want to mess around with different heatsinks, get two new fans. Second the recommendation for Noctua - they're neither the cheapest nor prettiest, but they are both quiet and reliable. I use their 80mm and 120mm fans for replacing old fans in PSUs, and I even prefer 120mm Noctua Redux fans for my Zalman CNPS6000 passive CPU heatsink.

First off, any Voodoo 5 should be equipped with four Os. So better invest in one more.

Voodoo fans suck as they inflate prices for those things beyond any reason. I just wanted to try it once or twice! They probably blow, as well.

Seriously, though: That never gets old.
If it wasn't that card that some family men sell their firstborn for, I'd rather say "Have you tried ignoring it and getting on with you life?", but, alas...

I'll copypaste something I wrote in a different context:
The cooling solution for retail cards was such, that you could insert that thing in a desktop case with hardly any airflow and it would get by on merely the static, 40°C+ air inside that and its convection/heat radiation on the case shell. Anything else might cause a RMA case with a roughly 100 % cost overhead to the revenue. Noise, meanwhile, was not considered any issue.
Hence the fact that you'll find MSI OEM cards with Gf4 Ti4200 with passive heatsink. In the right case, not an issue and OEMs tended to make their machines somewhat office compatible, noise wise.
Re: Gpu fan not spinning

So, even a V5 running stable in many applications, maybe, hugely depending of the rest of your setup, ventilation, room temperature, humidity, position of Neptune and Osiris.

Putting some huge, passive northbridge heatsinks on them was not all that uncommon, back then, before they became self-aware or something like that.

In your case:
If it's a) not supposed to be "office compatible" and b) doesn't have to remain a collectible, it's utterly trivial.
Pry the next best micro ventilator from a socket 7 cooler or the kitchen sink, apply some screws, hook up to a molex, go on.

Or consider the fancy options, for less noise, sure.

Heh.. the V5-5500 I bought new from CompUSA got the original heatsinks taken off pretty quickly and I mounted large socket 7 heatsinks on there.

For airflow, I made a bracket to hold either one or two 80mm fans above the card to blow air down towards the motherboard.

With a setup like that, the card will not even get warm.

You do definitely need good enough airflow to cool the card no matter what heatsinks you have. The stock ones are too small IMHO.

Yes they need active cooling.
Valuable card, and getting even harder to find. Invest in some decent fans. It is well worth it.

I’d never run the risk of my Voodoo 5 overheating, they are just too hard to come by without spending a fortune these days. I feel lucky to have “only” spent £100 on mine two years ago (and listed as not working/parts at that price).

Found two copper coolers (heavy) and some decent 5v fans for mine, not too different to stock, but much better cooling capacity than the cheap aluminium coolers.

Mine are SUNON 5v 40mm fans (Part number: KD0504PFB2-8). Luckily for you these are standard 3-pin fan headers, I had to replace the plugs with smaller ones for my Voodoo 5.

Mine are SUNON 5v 40mm fans (Part number: KD0504PFB2-8). Luckily for you these are standard 3-pin fan headers, I had to replace the plugs with smaller ones for my Voodoo 5.

So they come with the common 3 pin header connector, like mines, unlucky I bought the v5 without the original fans so I can't do the same!

Mine came without heatsinks or fans (and a number of missing capacitors and resistors), completely for parts. Fortunately the headers are commonly available on Amazon, so I simply chopped off the standard 3-pin fan headers and crimped on the new ones with a shorter cable length. 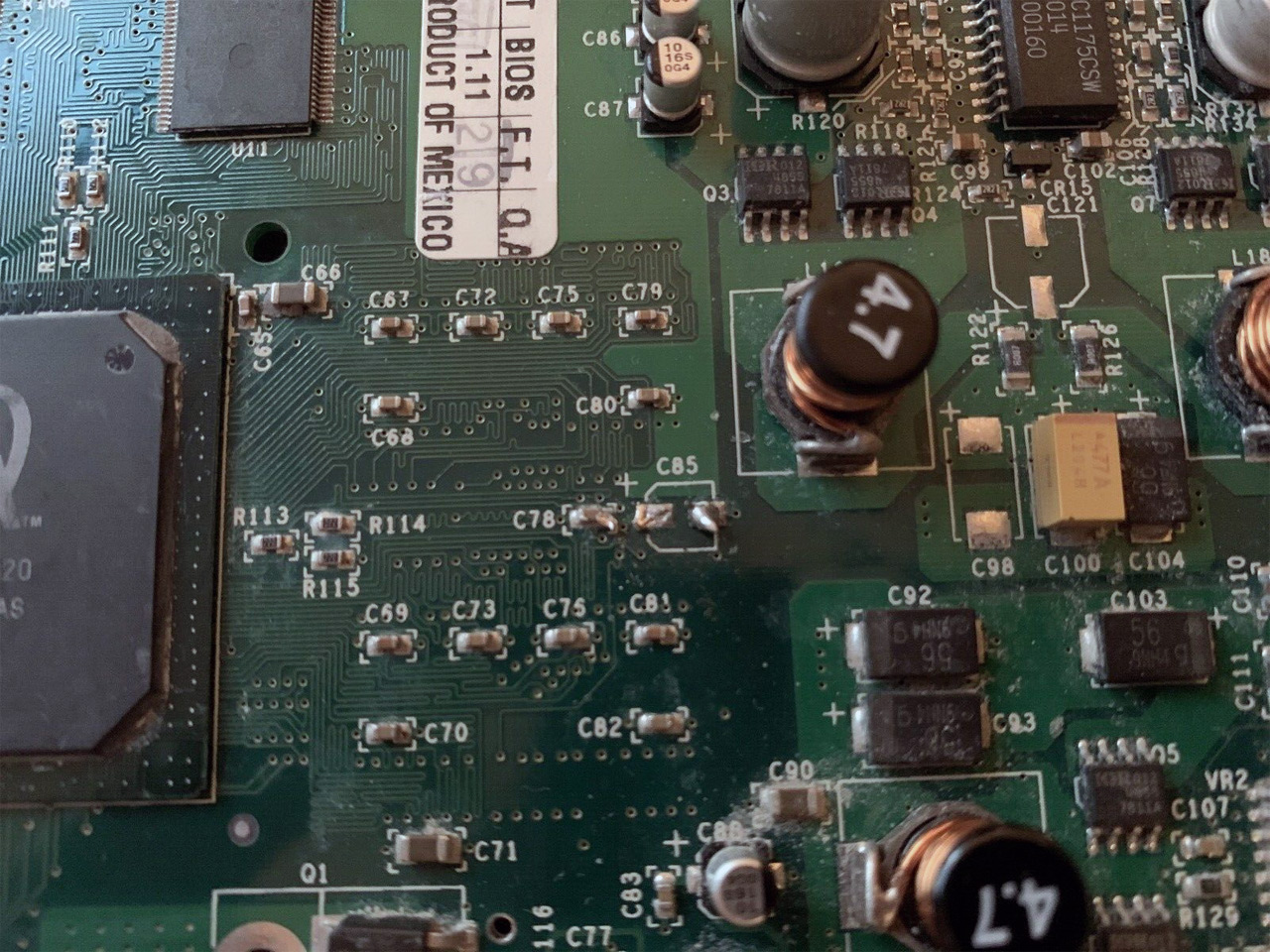