I use to have a Guards RED Porsche 944 that I enjoyed to drive.
But I always wanted a faster car.

In Silicon Valley there use to be an Amusement park and arcade called “Malibu Grand Prix”.
They are closed today, Out of business because of high costs of operation and real estate.
Like every other business in SIlicon Valley the high costs of real estate has driven them out.
They had some small formula-1 go carts that there low and fast.
They went about 25 mph but it felt like 50 mph and would pull allot of G-force.
https://youtu.be/A_03bO0FXOE

It was a fun place to spend a Friday night at.

So, I would like to take an old Porsche and turn it into an electric car.
Like this one.
https://youtu.be/VfRHud2W738

That slope nose needs some love from Ruf.

This is my car, bought it right at the end of last year. I used to drive a 2002 Dodge Dakota but thankfully not anymore. 🤣

This is my 1992 Oldsmobile 98 Recency Elite with only 60k miles on it. It used to belong to an old man who passed away and I bought it from his son. This is the first car I've ever actually felt anything more than just basic transportation (or in the case of my dodge: mild loathing) for. 🤣 I looooove this thing!!! 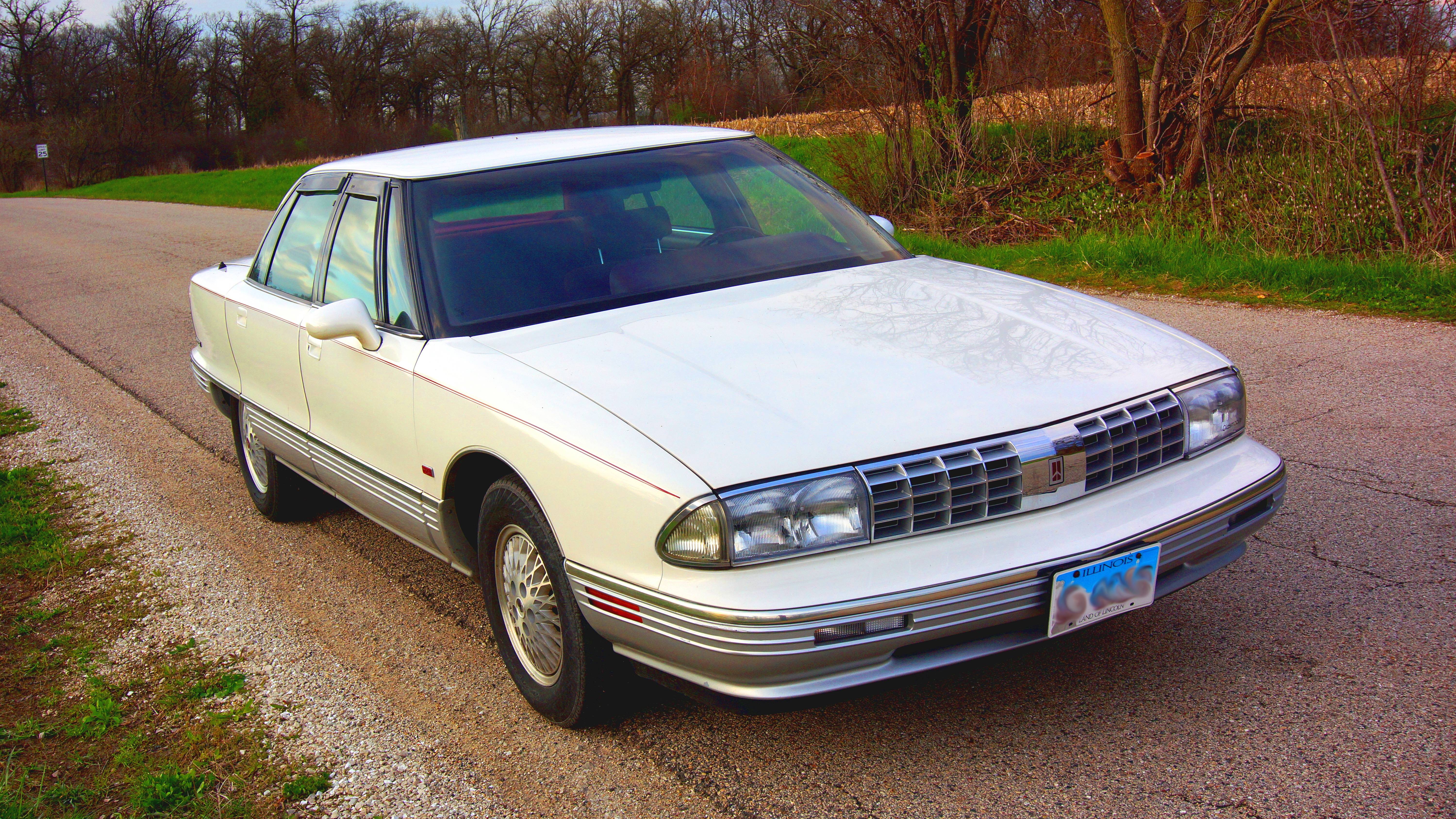 Pretty good shape for a 1992. I only drive when grocery shopping is on my list and I need to fix major issues on my car at this time and find out how I can permanently fix burning oil issues on an LX5 ShortStar GM 3.5L DOHC MFI engine that has 125,501 miles on the clock. I inspected the PCV Valve and that is still good and clean, checked the hose for any damage, and looked at the bottom of my car on the oil pan for any dings or cracks and found nothing. The engine still runs, but I'm more concerned about the engine's lifespan.

Jesus, you reminded me to turn on my car for a while 😖 I am sure the battery of my car is dead now, daaaaaamn

Do you know of what cars other computer companies used ?

I have one of those too.
I live out in the county so it is fitted with tire chains and a snow plow.

Got an old Merc. Needed a bigger car to haul the dog and various junk around. This one is bit too clean for my taste and now I got to be more careful with the exterior and interior. Otherwise seems to be OK, got it tuned for 650 Nm torque to avoid issues when fully loaded.

Today I picked up my old BMW that has been SORN (in storage) for 2 and 1/4 years. MOT (road worthy-ness test), taxed and insured in the morning but definitely got some storage-related problems.

The boot is completely dry but the battery compartment was full of water for some reason. The central locking no longer works and annoyingly this isn't just a fuse / relay problem. The traction control system is buggered and thinks that the wheels are slipping every couple of minutes and kill the power momentarily (but disabling the traction control gets rid of this). The handbrake is pretty weak (despite being left off for the whole two years). The brakes got cleaned up as I drove it home (45 minutes) and with fresh 99 octane petrol in it (I deliberately left it fairly empty so that I could fill it up with fresh stuff when I needed the car again) it still runs wonderfully for a car that's sat for so long.

It's a 2003 BMW 330ci Coupé M-Sport with a manual transmission. Not sure if I want to sell it as it is as a fairly broken (cheap) example or fix it up and use it. This is it pre-storage 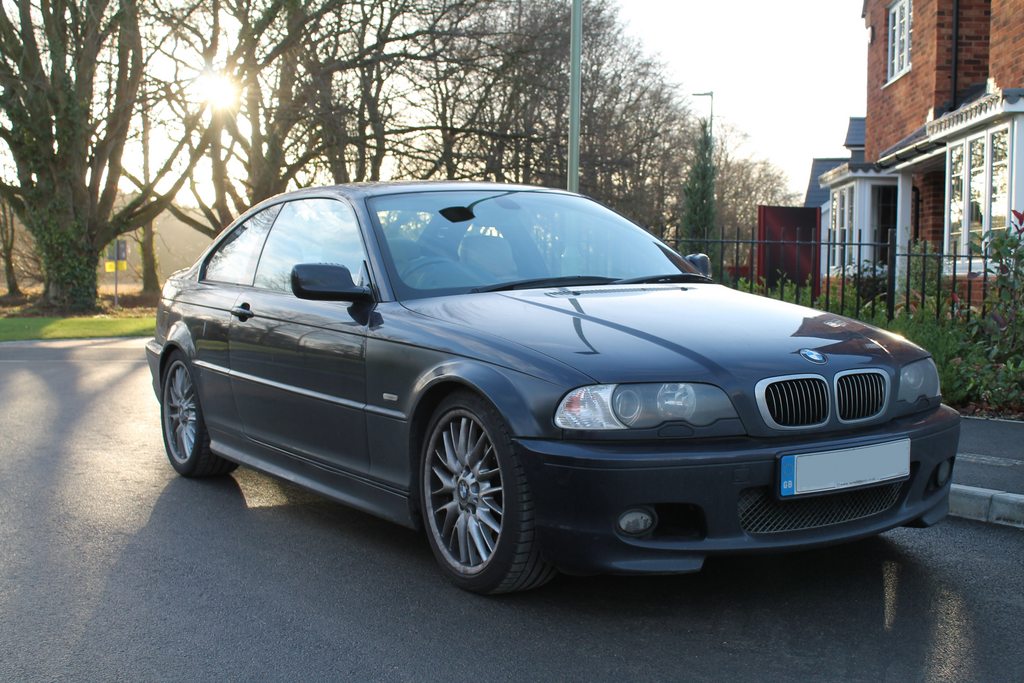 Tesla's are ugly and electric cars deprive you of a certain degree of mobility and freedom as many people found out during the fires here in Northern CA. Not to mention unless you're on Nuclear power not any better for the environment.

About the "Tesla's being ugly" part: that's purely subjective, and a matter of taste. I happen to like how they look, especially the Model 3.

Range, charging time and infrastructure have gotten at a point where a large majority of drivers would get around just fine in a recent model EV. And those aspects are only getting better.

As for EVs supposedly not being better for the environment: that's a frustratingly persistent myth that has been thoroughly debunked several times now: https://www.theguardian.com/environment/2020/ … -study-confirms

Electric Vehicles are most definitely better for the environment, and a more recent study has even found that that the higher upfront CO2 emissions during the manufacturing of electric vehicles are also lower than previously thought.

Also, most EV-scepticial "reports" always conveniently leave out the simple fact that oil refineries also require a lot of electricity. To put this in perspective: if you took the amount of electricity needed to refine enough fuel needed for an average ICE vehicle to drive a distance of 100km, and used that same electricity to charge the empty battery of an average EV instead, that EV could drive 80km on that energy alone. And that's before the fuel itself is even burned!

Sorry about the rant, but if humanity is to prosper for generations to come, we need to transition to zero emissions transportation as quickly as possible, and spreading the same outdated or downright incorrect myths to confuse prospective car buyers doesn't help.

Also, there's the matter of conflict materials, but that's where Lithium-Iron-Phosphate (LFP) batteries come in. Those contain no Cobalt, no Nickel and no Manganese. They're cheaper and more durable too, the trade-off being a slightly lower energy density. But that's being improved as well. Also, the recycling of lithium batteries is getting better as well.

As for my personal tastes: right now, I don't drive a car at all, but if I ever purchase or lease a car again, it will definitely be an EV. Although Tesla is technologically well ahead of pretty much every other EV manufacturer at this time, I kind of like the Jaguar I-Pace for some reason. I had the pleasure of driving one once, and I like both how it looks and how it handles. It's a bit beyond my budget right now, though. 😅

Does my stated preference fit here, or should it go in a separate topic called "What would you drive" instead? 😉

Not going to drive an EV until most of the power is generated through nuclear sources and the vehicle can be used for cross country driving. I'll be real hard pressed to EVER buy an EV simply because I can store gas for my vehicle long term reliably, and electricity I cannot. Although if graphene power generation continues to evolve into something usable in vehicle applications consider me onboard.

New cars are rarely kept more than 3-5 years, not enough time to make up the price difference in many cases. It's best to buy a used EV (5+ years) after most of the depreciation has happened.

The main problem I have with EV's, is the dramatic shortening of range after you start hitting motorway speeds. In a regular car it isn't more than 1 liter / 100 km no matter how hard you drive. In EV the range can fall 50% because of that. The other thing is that you never really drive with a 100% charge, it's mostly around 60-80% because quick charging slows down near full charge, so it's usually from 20-30% to 70-80%. Also most affordable EV's don't get near the charging speed (or battery capacity) of Tesla or Porsche, so instead of taking a quick leak and a full tank you end up drinking 4 cups of coffee and reading the newspaper.

most EV-scepticial "reports" always conveniently leave out the simple fact that oil refineries also require a lot of electricity. To put this in perspective: if you took the amount of electricity needed to refine enough fuel needed for an average ICE vehicle to drive a distance of 100km, and used that same electricity to charge the empty battery of an average EV instead, that EV could drive 80km on that energy alone. And that's before the fuel itself is even burned!

Interesting point, never considered that angle!
I do think electric is the future, Most countries are trying to clean up how they generate power so even if your effectively plugging your car into a coal power plant now hopefully that'll also be changing in the future.
Personally I like burring dinosaur oil and doubt my next car will be electric but have no problem in however many years everyone driving around in electric and petrol/diesel only been used by people that have interest in cars.