Final setup. Not too bad for an all up cost of under $nz60. Very pleased indeedy.

One extra thing added to cope with the warmer weather we are having to keep things cool. Modified a desktop case 12v fan and hooked it up to a 12v psu that I have no idea what it was for. It had a wide flat plastic device connector that fitted none of the deves I own. Cut the fan leads back, cut off the psu connector off and stripped the leads ready for soldering together. Out with my cheap old soldering iron, flux, handy hands and solder . Joined the for leads up after sliding a bit of heat shrink over one side first. put a bit of wider cable insulation over one set of leads so the solder joints don't touch in use,slip the heat shrink over the soldered leads, used a brad nail with the head chopped off as a stiffener for the joints. Added a bit of super glue for added insulation/strength. Covered that with a strip od rubber wih adhesive on one side.Fitted the fan in the cd/dvd drive bay, hooked it up and ran like a champ.

Today I tried to mount a cooler onto my a320 / 2600X system. I was screwing mount things in and three went in fine, the fourth was putting up a lot of resistance. I ended up using a spanner trying to force the mount to screw in place as it should have been fine.

But then I snapped the screw mount thing inside the backplate. Doh. I can't even mount the AMD cooler back onto the board as the backplate has the screw stuck in it!

Now to figure out how to fix the 480GB SSD for my laptop that won't boot after changing it to GPT for the partition mode so the UEFI option can be utilized. Going to make a backup of my desktop's 480GB SSD as an image in case anything happens to the drive.

Edit: fixed the laptop bootup failure: overrode and removed the hidden attribute/drive set ID and it booted up. Then, my main desktop did the same thing and it's now working, plus I fixed my brother's computer again (failed CPU heatsink fan and good thing I had a spare from an old build I parted out a long time ago due to a failed component on a motherboard).

I just finished ripping my Lord of the Rings 4K discs to the file server. Guess I'd better get the popcorn started - LOTR Weekend begins tonight!

After failing miserably on ebay/bestbuy/newegg to find a 30 series geforce "lady luck" smiled and gave me a wet sloppy kiss.
Found a Zotac RTX 3070 Twin Edge OC for a "decent price" at the local Gigaparts store. Got it installed and ran a few games
but decided to shut it down after reading on a forum that connecting a 3080 to a power supply with a single cable fried the PS.

The card manufacturers need to do a better job of illustrating the correct way to connect these cards to the power supplies. It's
not spelled out anywhere in the instructions that it's safer to connect each PCI-e cable to it's own connection on the PS. Ok
maybe I'm not the brightest spark, but is it too much to ask for relative for what they're charging for these cards?

Attached are some pics. Any comments or recommendations on the cable connections would be welcome. For the record
I purchased two more PCI-e 8 pin/8pin sleeved cables for peace of mind.

I've put my 4890 in there. I have cards that are faster quieter and cooler but I just fancied seeing what this card can do when not paired with a slightly more modern CPU than it usually gets paired with.

This Thermaltake case is absolutely lovely to build with. All the side panels come off and the front panel and facia can come off and rotate so you can have it running with a traditional vertical motherboard position if you would like. All the side panels can fit on any side and they have vents drilled in different parts, so I can match up the side panel that best fits the component - i.e. the panel with holes drilled on the left side sits directly over the CPU, and the panel with holes drilled on the right side lines up directly over the GPU so both CPU and GPU get good access to fresh air.

The case also comes with a 160mm (or something) fan up front which is quiet but surely pushes a lot of air inside the case. The PSU has it's own separate air flow. 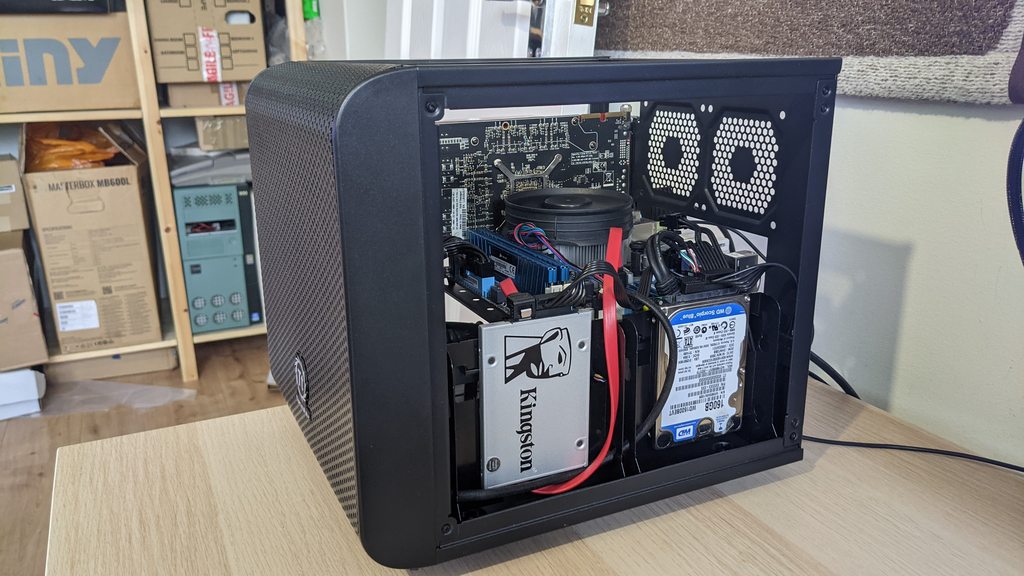 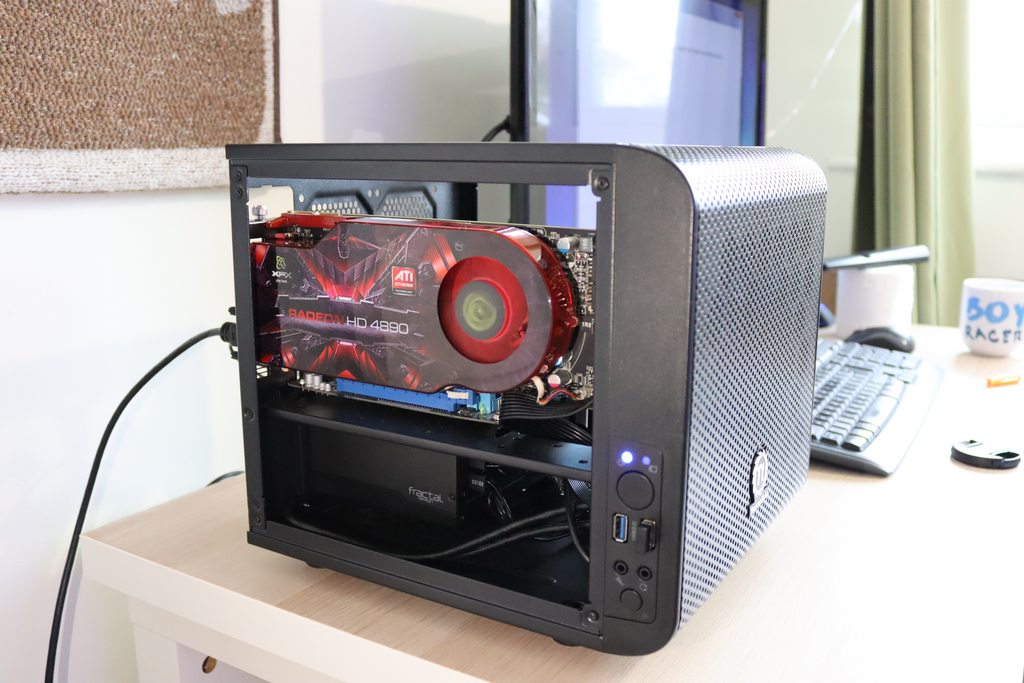 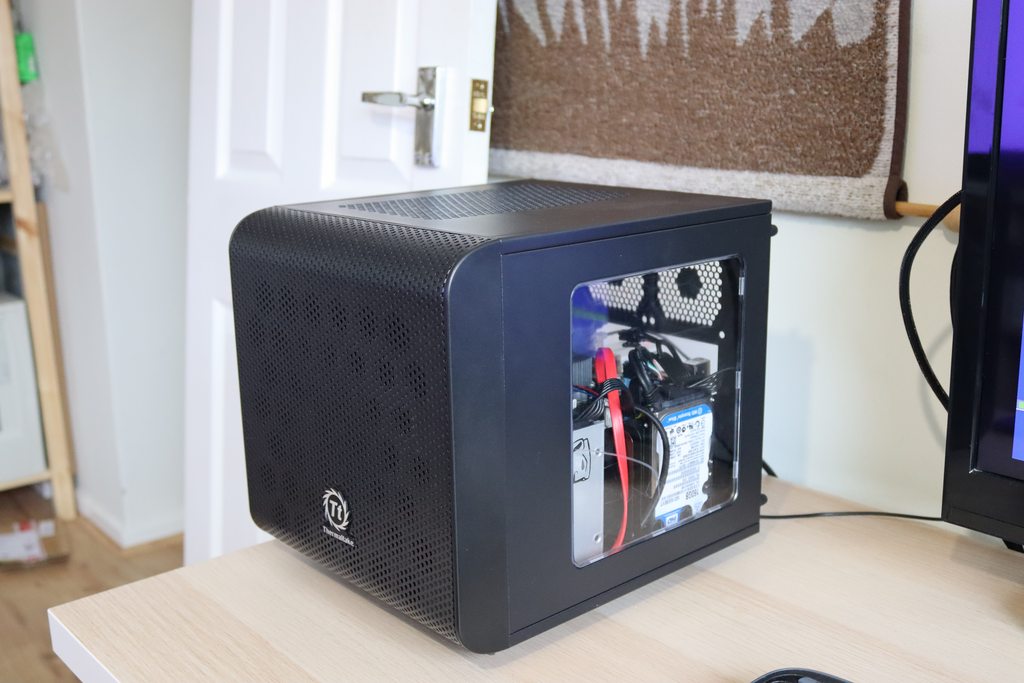 A few recent modern activities:
1) set up son's new 1440p monitor. We spent some time going through his favorite games, switching the res to 1440p and checking performance. He's on an i7-4790/RTX2060 KO. For the most part, all the games perform well at 1440p, in some cases a few detail settings have to be reduced, or he settles for occasional dips <60 fps.
2) cleaned out my PC case, mainly accumulated dust on CPU heatsink and exhaust fans. Noticed cpu temps drop a few degrees after. 😎
3) benchmarked Tomb Raider 2013 on my system (i5-4590/GTX1650 Super). At 1080p, I can run the game with every detail maxed out at around 55 fps average, with lows in the high 30s. If I drop SSAA to 2X, I average 72 fps with lows in the low 50s: good enough for me.

Got given a 2012 Samsung i7 lap top thingy. The win7 install was corrupted and I couldn't get it to boot up after trying for about half an hour.. Not even able to restore it either. . Swapped out the 1T for a 320gig hdd I had win10 on . Fired that up and win10 loaded the correct drivers and I was presented with a login screen. Tried my login but a few keys are sticking. I suspect a liquid has been spilt on the thing. CRC556 freed up a few keys but I need to get some contact cleaner and CRC226 to completely sort it out. It has 6gigs of ram and is in quite good condition .

Just binge watching Cobra Kai on Netflix. A modern look on new Karate Kid (1984) storyline. So far its great. I need to finish it before monday when we all will be back at work. I have a looong training in course for the new job and this Miyagi Karate fun is exactly what I need.

Combining 16gb of Ddr3 1866 with an OC'd Fx 8370 on a NIB Biostar 990fx board. Need a decent GPU for it, the old GTX 260 I have spare to use with it is pretty underwhelming, but does surprisingly well considering the age. And leagues better than the gt 210.

I tested the CQ62 system unit prior to fitting the new lcd setup with an external lcd monitor. Apart from the wifi card, which I pulled due to the system set up routine not liking it. Fitted another wifi card which the system liked I had removed from another scrapped system. The system booted up just fine, then tested a few things in Linux Mint Debian Edition 4. All hardware was working as it should.

I shut down the system then fitted the lcd assy to the system unit. Fired it up and all was oaky dokey with the complete notebook assembled. I'm very happy with the result. A new computer for me for $nz0 and about 5hours of my time.

I'll keep the Samsung notebook mobo for another project I have in mind in the future.

I love the way you can swap/mod these PC thingys.

Oh, I missed that. I need to fix my sleeping hours, been sleeping less and less because of work. Getting better now. Btw, I tend to prefer Debian with XFCE, seems to be more lightweight and faster. I just had a first time with Cinnamon last week when I found out that some coworkers use it.

Oh, I missed that. I need to fix my sleeping hours, been sleeping less and less because of work. Getting better now. Btw, I tend to prefer Debian with XFCE, seems to be more lightweight and faster. I just had a first time with Cinnamon last week when I found out that some coworkers use it.

Popped down to that second hand computer shop I mentioned earlier and got enough matching second hand 2mm and 2.5mm screws for the second CQ62 rejuvenation. Tidied up a few major scratches on the hdd panel. Job complete. The young guy was quite curious about the other old stuff I have. I told him about Vogons.org. Maybe he will join up.

I had some extra disposable income from bonuses and such, so decided to upgrade the CPU in my main rig from an i5-4590 to an i7-4770, knowing it would not be a huge upgrade except in very specific situations. I wanted to max out my system (an HP EliteDesk 800 G1 Tower). Well, almost max it out, as it does support the 4790K, but the price premium on the K processors was more than I could swallow. Now my cpu is completely out of the way in games, putting the bottleneck squarely on my gpu (GTX 1650 Super). I did some benchmarking. Here's some highlights:

edit: The cpu cooler that HP used is pretty amazing. It doesn't look like anything special, but it does screw down as opposed to the snap in holders, maybe that's it. I thought the Haswell i7s were supposed to run pretty hot, but I cannot get this i7-4770 past 59c with two different cpu burn-in programs running simultaneously. I need to remember to take some photos and post here, it's a total sleeper gaming PC.