Replaced the damaged sound speakers on my laptop. Easy peasy. Fired up some classic 80's songs to test it out and was loud and clear. I still can't understand though how the previous owner managed to damage them.

Now updating a few apps before shutting down for the day.

Still working on my Man-cave.
I am turning my family room into a Man-cave.
I already have a good 7.1 Surround sound system.
Which is more than enough for this small room with wood subfloors.
It rumbles like an earthquake.

I am just adding some finishing touches.

I wanted a sound bar for those times which is most of the time when I just want to watch TV
and NOT wake up the entire house.

1) So I purchased a Klipsch 40 sound bar.
Its small and just loud enough with optional on subwoofer. It has a setting called dialog which lets you hear the voice clearer over the music. Which I really like because I don't like it when the audio voices are hard to hear.
It sounds pretty good and the remote is loaded with features.

2) I also purchased a Creative X3 to hook up to my PC / Mac and link to my Home surround system.
it supports 7.1 virtually. I am currently am using the Creative Audigy 2zs which supports 7.1 too but the X3 is a higher resolution DAC.
Designed for Movies, games, and computer audio it is the best budget DAC on the market.
Should work good.

Maybe I will upgrade my old A/V receiver next with a 7.4.2

Took a break from the Versas for awhile (I have those tuned up greatly), forgot what a beast the ol InWin Desktop is. So I brought out my LInux machines this weekend...a Lenovo ThinkPad T61 road warrior, and the "BeigeBeast"......here's the quick specs....

- updating to v 20.1 of Linux Mint
- Installing The Sims 1 in Wine (retro activity), had to use Lutris, made the install go a lot smoother
- Installing all my STEAM games and tuning them to run (FNaF 1-6, Witcher Deluxe, RetroCity Rampage DX, Postal 2, Monster Truck Destruction, Thimbleweed Park) using Proton
- Reinstalling all my other modern applications I use a lot like OBS Studio, Openshot Video Editor, Graf-X II, and VeroRoute

What I find funny is by virtue of the graphics power alone, these are eating the Dell 7010 I was using alive. Which is a 4th Gen Core I5.

Since we're in the middle of a polar vortex and it's freakin -28 C outside, I fired up Crysis in software rendering mode and let it burn some CPU cycles. It may have brought up the room temperature by .0025 degrees. 😜

Getting 19.3 fps at 1080p/low. That's pretty incredible for pure CPU rendering. I mean, back in the day my highly overclocked GeForce 8800GTS managed to cough up ~25fps (at a slightly higher 1200p). And to think, that 8800GTS had 96 "cores" completely dedicated to the task!

Been doing more tuning/tweaking to my LInux boxes, decided to retire BeigeBeast as I'm having problems getting audio drivers in LInux Mint. So I moved back to my i5 based Dell - but put the video card from beigebeast in there, and the 1TB HDD with some "redneck engineering".

Need as much power and speed as I can get currently as I'm making lots of YouTube videos. I have one going up showing the current state of my computer collection and my big box vintage software collection. Trying to get the retro-PC stuff done before "Guitar Season" starts (sunny, dry, and nice outside) - where then I'll be outside, in a face mask, now for two reasons, building some new prototype guitars once the other builds I have are finished.

Just some daily work on Magento websites for my new job...

Transferred my 7700k ITX build into a new Thermaltake Tower 100 Mini case and moved my 1080 Ti to it. (previously a GTX 1080 mini) The new case is way bigger than I thought it would be. But, it turned out pretty nice and still fits on the desk where I need it to. The case is very modular and easy to work with. I added some RGB's because that's what all the trendy PC Master Race kids do and my 3 year old thinks it is the coolest thing ever, haha. I don't really care for it all that much, so I'll probably leave it on a static color. 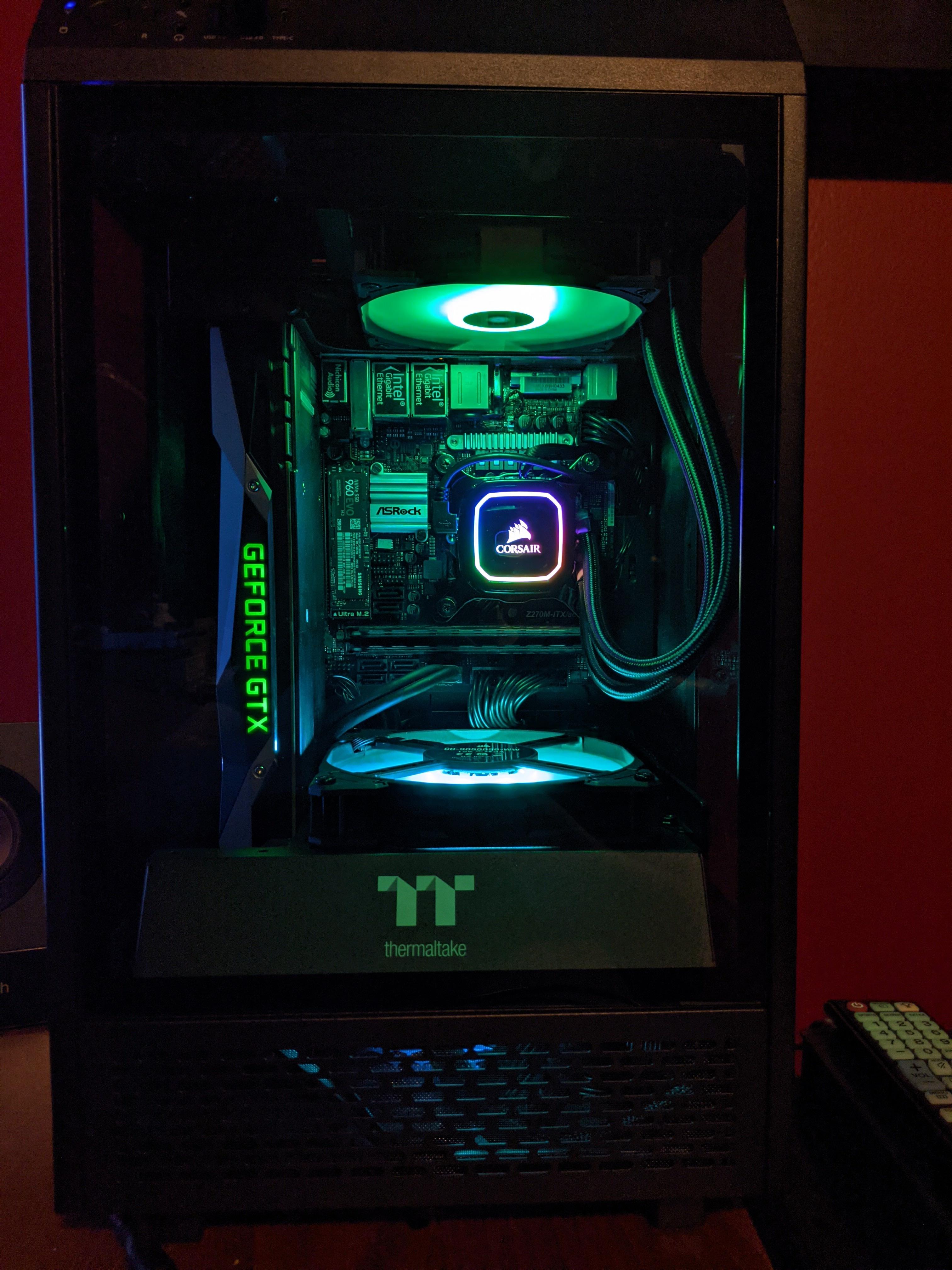 Some time ago I found a pre-built Asus system with an Haswell i7 4770S CPU.

A Haswell i7 @3.5 GHz is fast enough for most tasks but I wanted to see if I could persuade this 4770S to run a bit faster so I moved it to an Asus Z87-A motherboard in a system I use for gaming. I modded a BIOS (AMI UEFI) with very old Haswell CPU microcode from before Intel got the turbo limitations sorted and I was pretty pleased with the result. Now the CPU will happily boost all cores to the max single core turbo multiplier and dosn't care at all about silly stuff such as power usage or maximum all core turbo limits.

This CPU will probably stay in this system and I will move my I7 4790K to the Asus pre-built dumpster find as it's motherboard lacks the BIOS options to allow all cores to run at the maximum single core turbo bin even if I would manage to downgrade the CPU microcode. With a "K" CPU the multiplier limits set by the BIOS at boot dosn't matter and can easily be overridden from the OS if I feel I need more speed.

finished cleaning and upgrading my dell xps 730x.
some before photos.

some after photos. also upgraded to i7-975, 12GB ram and a second gtx 285.
rolled the os back windows vista home premium since that's what it came with.

That XPS came out great. I always liked the looks of those cases when they first came out.

That XPS came out great. I always liked the looks of those cases when they first came out.

i agree. maybe one of their best looking machines ever.
the current dell xps lineup appears to have lost all the coolness vibe.

I fully agree. The new XPS line just looks like there regular office/home PC's. There's no sence of care for how it looks or even airflow when they stuff hot running gaming parts in a office PC chassis

After an irritating day of buying B-day presents and then wrapping them for the wife, trying to find time to do our income taxes, and fighting with terrible drivers around town (half of which were stoned out their birds on pot) - it's 9pm and of course my wife's totally not technical friend decides to share out her boyfriend's Plex Media server........GREEEEEAAAAT! I get to spend the next 45 minutes fixing all the shit I'd been avoiding for the last two years just to get all this working. Rokus were easy enough.....got a 93' Magnavox CRT with a Roku stick on it, and a $345.00 Sharp 52" roku TV in the bedroom.....but the REAL problem is our sad bastard television in the livingroom....well...first.....

It's a 2017 Samsung 52" smart tv - god I hate that !($!#%$(&U!#(% thing! It's slower than a 386 SX trying to run Windows 95 on 4MB of RAM, it's buggier than Windows Vista after visiting 1000 porn and warez sites and skipping updates for 9 months, and basically - for an $800.00 set - I'm rather dissappointed with it, thankfully it was a gift when 4K was all the rage.....so a certain family member could watch Football while here (sigh, I hate spots). Anyway, this P.O.S. had Plex on it from 2 years ago when I started dabbling in running a Enterprise Class, CentOS loaded server in my apartment, hehehe, one of the higher ups from our Dev team gave it to me. Of course, it did not work, of course it had to have Plex installed 4-5 times then uninstalled, then reinstalled to fix it. Not sure why this TV has so many problems, it's been kepts up to date, anything we don't use that can be removed has been....just seems sad but hilarious a $800 TV is being outshined by a Best Buy Sale-Day Special and a 1993 Magnavox 27" CRT with a Roku stick that overheats on the norm and still keeps going (the stick, not the TV).

So I get that going, and of course, I decide to mess with my server. As it's got a 2 year old install of CentOS 8, decided to run updates, and of course, that broke Grub. At least I was able to back up some of the super-rare movies I ripped from DVD and put on there. That said, did find a way back into CentOS, so I guess when I'm in the mood to tinker next time, I'll mess with Grub and getting everything running happily again.....maybe just remove that first Grub entry that's causing it to go into recovery mode shell.

Meanwhile, been trying to upload a vintage PC Youtube since noon, damn Mac OS decided to update in the middle of it (shakes fist at Mac). That's why I'm dabbling in all the different ecosystems right now, to find the one that fits me best. So far Linux Mint is winning. MacOS is a bit limited in what I can do but makes a great dedicated music/video editing machine. FreeDOS really is a close second runner-up to Linux mint if not for the lack of WPA for WiFI or the inability to stream on a 27 year old NEC Versa laptop running FreeDOS (yes I have e-mail and interwebs on those and I use it, a lot).

I have 2019 Samsung "SMART" TV from 2019 (RU7100 series) . Thank goodness for the service menu .
- WIFI disabled
- Bluetooth disabled (otherwise every time some dodo tried to connect, I would get a notice)
- Dynamic auto dimming disabled (if it worked well, I might have kept it but the varying brightness during subtitles or when using a CLI annoyed the hell out of me)

Otherwise wired Ethernet, is disconnected and unless I happen to need a bugfix or hear about an improvement, it will stay disconnected . The only annoyance I have left is the TV sometimes decides to relabel the names of the HDMI inputs. This is harmless but still a bit annoying .

"SMART" functionality is handled by an Nvidia Shield and a Wetek Hub running LibreELec (I still haven't found a way to convince Android to not resample 44.1KHz audio to 48KHz, but LibreElec has no issues passing 44.1KHz unaltered).

when I must use WIFI, I usually use a router with DD-WRT in client-bridge mode . I got tired of having issues with Intel wireless cards .

Today I bought a VR headset Oculus Quest 2. It feels like the day you buy a new console with the unboxing, huge potential for new games and experiences etc! I've never had a VR headset before.

Today I bought a VR headset Oculus Quest 2. It feels like the day you buy a new console with the unboxing, huge potential for new games and experiences etc! I've never had a VR headset before.

If you don't mind spending money, the episodes of Vader Immortal are quite well made.