Firstly I apologize for my lack of knowledge on the technical terms, and secondly the fact that this might not be the best place to ask what I'm about to explain next - I'll try to be as concise as possible, as you guys are probably my last hope since most of the search terms I inputted enventually lead me to this forum somehow. 😀

*ahem* So, lately I've been on a long quest to find a lost piece of software that was probably bundled with a Creative Labs Sound or 3D Blaster hardware. The software in question was the game Re-Volt (a 1999 RC race cult classic), but unfortunately I'm not sure if it was bundled as a full game or a demo (or whether it was ever bundled at all!). The only info regarding a possible demo of this game, was a line in the source code listing it along with several other demos that have slowly but surely been found over the years.

What I want to know is whether there's a list somewhere with which games came bundled with each Sound/3D Blaster, since its been excruciatingly hard to find any info on this matter, or preferably if any of you guys have knowledge of a Creative Labs hardware box ever bundling the Re-Volt game.

No idea about their Sound Blaster lineup but concerning the 3D Blaster (and Graphics Blaster) graphics card lineup I just checked my collection and the only bundled games were Expendable, Incoming and Rollcage for those cards releases in 1999 (TNT2, Savage 4). No mentioning of Re-Volt.

piggybacking on this thread with a related topic - the game cds that came with a 94/95 creative multimedia kit, it was either the cd-blaster package or the multimedia-blaster (i think?) pack. it came with a quad speed cd rom drive, a soundblaster 16, creative speakers and a whole mess of CDs with edutainment stuff and games. these are the games i remember from it:

and i'm pretty sure this was one of the cds:

would anyone have a full list or maybe even the CDs still?

Reply 3 of 22, by Anonymous Coward

The SB16 CD-ROM kit that I had contained a Sony CDU 33A 2X drive and CT2230 SB16. That kit just had Lemmings and Indycar 500.
A friend of mine had a very similar kit with the same card and drive, and he got some kind of crappy FMV game called "The Magic Death".
Another friend bought a similar kit but his 2X drive was a Panasonic/Matsushita CR563B. This one had a few decent games. I remember Syndicate Plus, The 7th Guest, and Heretic Episode 1. Another friend got a 4X kit that I am pretty sure had a CD-ROM version of Return to Zork. These kits were really popular from 1993-1995. I think the kits pretty much ceased by 1996.

I'll try to look up these kits to see if I can get more details like the MK number.

I also found this using a search engine:

-Where in the World is Carmen Sandiego? Deluxe Edition
-Just Grandma and Me.

-Secret Weapons of the Luftwaffe
-The Secret of Monkey Island
-Loom
-Lemmings
-Indianapolis 500: The Simulation
-Sherlock Holmes, The Simulation

My Live! Xgamer has some nice bundled games but not Re-Volt sadly, I’d like a copy of that. 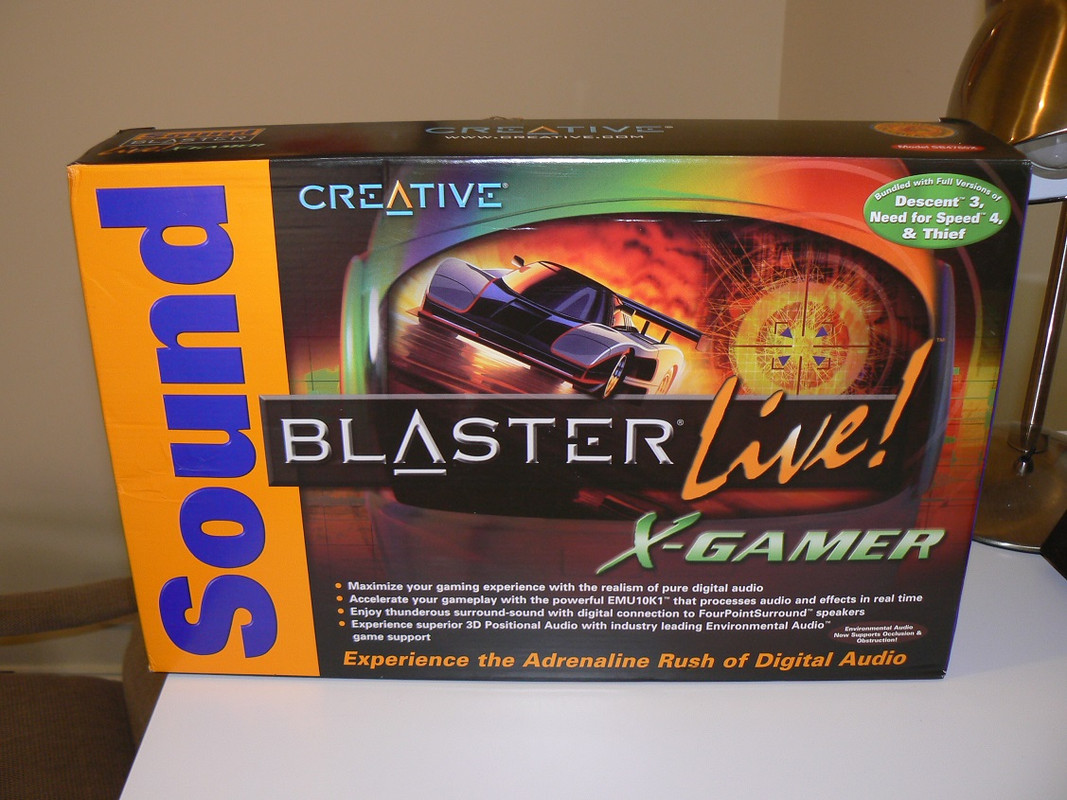 Sound Blaster AWE64 had Eradicator and Magic Carpet 2.
Sound Blaster Live! had a cut-down Unreal (v205). This version is often mistaken on the internet as a "shareware demo" when it's just the usual OEM-exclusive first slice. Unreal has no demo.

Reply 8 of 22, by Anonymous Coward

Ah, I thought Magic Carpet 2 came with my Mach64, but perhaps you're right. It came with the AWE64. What an awesome pack in!

I asked for Sound / 3D Blasters because I thought those were the obvious candidates for a search, but I wonder if any other hardware/software products of Creative Labs were ever bundled with demo/full games as well.

Also, thanks for the all fast replies so far guys! 😉

The SB16+CDROM kit we got back in the day had a couple of edutainment titles I don't remember, plus Indy 500, Lemmings and Rebel Assault.

Only one of my three 3D Blaster Voodoo2 12 MB packages had a bundle including Ultimate Race Pro, G-Police and Incoming:

The DXR2 DVD-ROM + MPEG decoder kit came with DVD versions of Claw and Wing Commander IV. Both used MPEG2 video for the cutscenes.

PS., I love seeing all these Creative boxes. Brings back memories of young me walking down the isles of Computer City and dreaming of the PC I could build from all those parts.

Also attached below are zips that have pics of everything included... that I shamelessly ripped off of an eBay auction. Thanks random eBay seller! 🤣

I love those multimedia kits - I bought a couple in my time and they actually came with pretty good sound cards from memory. An Audiodrive in one of them and a Vibra16S in the other I think.

Just came across another one on Ebay.

Argh. I didn't have that SB 2.0 kit. I had the Sound Blaster Deluxe, but it's funny because I bought that exact same joystick separately and it was probably the worst one I've ever owned. I'm surprised the box for that kit is so huge, because there's seriously nothing of value in it. I think the speakers I had came from a surplus store and they were probably about the same quality. $10 at most.

Also that AWE64 DVD kit is interesting. I had no idea they were still offering software packages like that in 1998. It's pretty funny that they were still hawking Grolier at that time. It seems like nobody ever bought it separately, and the only way to get rid of them was by bundling them in these kits. I had the 1994 version in my SB16 discovery kit. It was the only CD in that kit that actually made use of the CD-ROM drive, and after blowing $469 1994 Canadian dollars on that kit I had no money leftover for CD ROM games, so I just sat there sadly watching all the 160x100 vidoes in Grolier Encyclopedia. By the time I could afford the games, my system was barely able to play them. My introduction to "multimedia" on the PC was such a letdown, especially considering how fast and cheap the drives got just a year or two later.

Really loving all the finds so far!

From what I'm seeing, despite there being a pattern in what games were bundled with each system, sometimes there seemed to be some deviations, so there's still hope for me.

Thanks for the help so far guys, hope one of you will one day give me some good news about this elusive Re-Volt version. 😜

I had the Game Blaster CD16 bundle growing up. Here's an updated list and a pic.

Sound Blaster Live! Platinum lists the same games but not the demos: