Welcome to the updated VOGONS

@imi, mouseover change is pretty much instant. I think you need to disable all your customization tools to give any judgement on the forum behavior now.

I'm not seeing any of the dithering you mention on my S9 with Chrome. 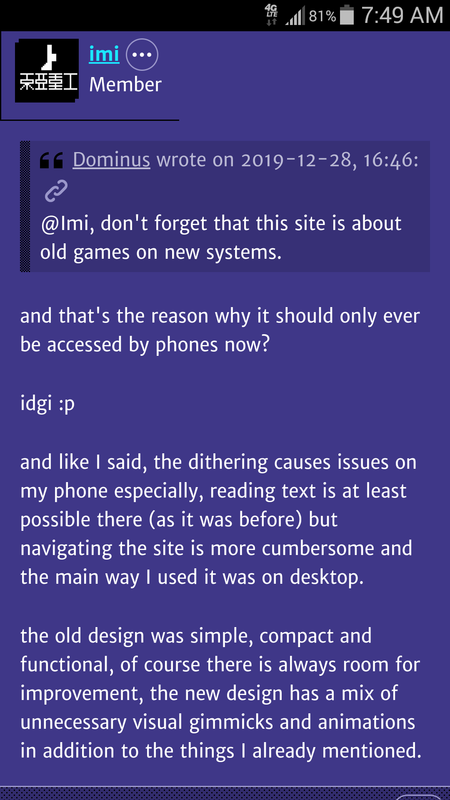 I don't see any flickering on my PC either - video refresh issue?

the dithering was changed to a solid color since then. Because of whatever issues the dithering is causing on bad displays.

Left Vogons for few days and what...? What a change! I think it's better then before.

My first PC had Windows 98 os.

The page switcher widget is still confusing to use...

I'm not seeing any of the dithering you mention on my S9 with Chrome.

I wanted to thank whoever "fixed" the background color 😁
THANK YOU !

Also, the blinding "dot effect" seen on bar at top is made more pronounced by enabling build-in Night mode inside Opera browser app for my S10. But I can live with that, so no need to fix.

Have given myself a while to get used to stuff before commenting.

First the good:
- The mobile usability has increased dramatically. Vogons on a phone with 4.4" screen was a huge pain before, zooming in and out all the time and tapping on the wrong links all the time. Now it's an enjoyable experience.
- Despite more functionality, the speed & responsiveness seems to have increased, not decreased, both on mobile and desktop.

Then the bit I feel could use some improvement:
- Even though I really like the mobile version, I don't like the fact I still don't get the desktop site when I tell my mobile browser to give me one.
- Dithering may have been reduced, but quotes on the mobile version are poorly legible and still flicker when scrolling (Xiaomi Redmi 4X, Android 7.1.2, Chrome browser)
- Why on earth the inconsistency in colour between mobile & desktop? It's like looking at two different sites... edit: seems to have just been addressed. Thanks!
- Desktop usability has taken a dive:

@Imi, don't forget that this site is about old games on new systems.

That's the whole point. The site looks & works much better now on tiny little mobile screens and on ancient low-res CRTs in my retro-cave, but on modern desktops it's another matter entirely. Even with small fonts and small line spacing, the amount of information on an index page isn't even close to what it used to be, and there's still huge white (er... purple) gaps. It's not just a resolution thing - I have a very similar experience on my relatively low-res 1360x768 laptop vs my QHD 2560x1440 desktop. Zooming out to the point the whitespace becomes more acceptable makes the text far too tiny. The problem seems to be that the line spacing option affects lines within a text block, but not between them, which is where the problem is.

If anything, the low information-density is a very non-retro software feature that is killing a lot of forums' usability. Please don't let it do that to Vogons too!

Making the distance between items respond to the line spacing setting would help a lot.

- I'd also very much like to see page numbers on the index pages so I can choose to go to first post, last post or anything in between when I click on a thread.

Bottom line: I've noticed I've been using Vogons a lot less on the desktop this last week, and the increased mobile screen time hasn't been making up for it :'(

Vanilla phpBB has a ton of things that are… let’s say, “not good”. In this case, there was a “jump to page” form which required client-side scripting. I initially made a fallback that excluded the jump form for noscript users, then decided this was silly since there’s no reason client-side scripting should be needed for such a simple feature, so extended the server code so the form worked just fine without client-side scripting. I deleted the fallback from the HTML but forgot to delete the CSS that hid the jump form when JS was disabled. So this should be fixed now, and pagination should make sense again. Thanks for reporting this!

Thanks so much, it makes sense now! Also thanks for making sure the site works 100% without JavaScript, I tend to keep it off by default as it makes my computer lag.

Did someone mentioned a very old version of IE being still able to load this forum without javascript? I can't remember in which thread. I've tried both 5.01 and Netscape 4.08, neither can let me log in.

Thanks! I hate it.
Seriously, it's alright
Can we get some themes in here so it isn't so...Purple?
I'd love a night mode.

Okay, just messed with Opera on my Note 9,and the above issue with its Night Mode and the excessive stippling effect comes from the following setting highlighted in red - you need to uncheck 'Dark Web Pages' as it doesn't really work on this site to make it dark, so is a redundant setting:

When you have unchecked this setting, my Opera page changed from the above stippling effect (basically a negative image to invert colour) to a drastically less pronounced and subtle effect below:

My first thought of the new forum layout is a lemmings like "oh no!"

Maybe it just takes some time to get used to.
Minus for requiring script support to show pictures on buttons though - what are the forum developers smoking?

Holy Lord, this is a visual cacophony. I initially thought that the site had been taken over by domain jackers and turned into a top-ten-list clickbait farm.

Holy Lord, this is a visual cacophony. I initially thought that the site had been taken over by domain jackers and turned into a top-ten-list clickbait farm.

I can't login to the site with Firefox 38.8. It says "The submitted form was invalid. Try submitting again" even though the login/password is correct (had no such problem with the old site). I even allowed vogons.org to execute in NoScript but to no avail.

I don’t know why that would be happening. phpBB has a pretty… bad… anti-CSRF implementation, so I’ve seen that message quite a bit when the short lifetime tokens expire, but the second submission always works since the token is refreshed. Also, the login form is just a plain HTML form, so I’m afraid I don’t have any useful advice other than to upgrade your browser since FF38 sounds like an rootkit just waiting to happen (NoScript will not protect you from vulnerabilities in the image decoder) 😀

Thanks. Unfortunately trying to login twice does not work. Old versions of Firefox are required on this PC which is an Athlon XP that does not support SSE2.

Also what did you think of my suggestion:

I'd personally like to have two more color themes available:

Snover already replied in this thread or another why more themes are not feasibly.

I'd rather have the stock phpBB theme than this eyeball assault.

What OS are you running? Maybe we can recommend an alternate non-sse2 browser.