Squirrels, squirrels, let's go nutz for squirrels and whatever other backyard wildlife you have.

Since some of us are taking over certain vintage hardware threads with our squirrels, better make it right.

Mr. Feathers (osprey) eating a fish near the front yard.

Last, but not least, when I was living in Washington state near the Olympic Mountains I had these guys greet me every morning looking for some apples.

...and, no, I am not related to these guys (hint: looks like we have the same taste in clothing). BTW... watch this video for about two minutes and then read the first comment and tell me you don't laugh. Cool music track regardless.

This little devil likes to eat anything I plant in the garden.

We don't get much wildlife here in the suburbs of Melbourne - some possums and large fruit bats but they're nocturnal. We do have an unreasonable number of Redback spiders this year - these can be deadly but the children are old enough to recognise them so I leave them be. This one's set up shop in our water feature and spends some part of her day attacking leaves that she mistakes as an insect due to the running water.

I live in the city zone between city and countryside, so we have some wildlife, yet not that much diversity.
Lots of birds all over. Then we have mice, and those that are the size between rats and mice.
We have tons of hare and the occational red fox here and there. However there are a deer or two.

We do have an unreasonable number of Redback spiders this year.

Uhhh... Redback spiders...
I saw someone compare them to black widows on some nature show. He actually handeled them both by hand. As far as I remember, then it was this Coyote Peterson that have this show, and you can find the episode on youtube. Those two spiders are so identical in so many ways, and what makes one of them more dangerous, are not how venomous they are, rather more how agressive one of them are in general. More or less equally deadly if one eventually gets bitten.

Here in Denmark, we do not have such things. Well... We have one of the most venomous spiders in the world, looking at the venom alone, yet it's fangs are so small that it can not penetrate anything else than flies. So. Not dangerous. The most dangerous animal we have, are our only venom-snake. Yet it's venom are no more dangerous than that of a vespidae (I think it is what people call yellowback or something) The most dangerous we have are the plant called deadly night shadow. Three berries, and an adult will drop dead without help. One berry, and a child drop dead. Else nothing here are dangerous. No big cats, no moose, no bear, no nothing. Danish nature is boring.

EDIT:
Wolfs have come back though.... Yet they tend to have ran away for a long time, before we stupid clumpsy danes, come marching through nature. One can say that they are too shy to be at any risk to humans here. We have tons of resources for them, lots of deer and such, and it rains a lot so they will always be able to find food and water.

Contrary to belief, Redbacks aren't very deadly. Nobody has died from a bite for decades and they're not likely to be lethal even if untreated - just painful/uncomfortable.

Here is one of our wee visitors, one of many that live in the small wooded area opposite the house:

For VOGONSAS (Very Old Games On New Systems And Squirrels):

Well... Besides the baby birds I rescued and raised until they were able to take off (2 of 4 survived) the only beasts in the back yard here are the dogs

here is a good picture of the beasts at 5 months old enjoying the snow before we went south. Woof

For VOGONSAS (Very Old Games On New Systems And Squirrels):

Amazing albino squirrel. I'll have to find some old photos of a fox squirrel I took back around 2010. The thing was the size of a cat. At first I thought it was an actual small fox. It's the largest tree squirrel in North America and I thought I was seeing things.

Contrary to belief, Redbacks aren't very deadly. Nobody has died from a bite for decades and they're not likely to be lethal even if untreated - just painful/uncomfortable.

Just did some reading and you're right! No deaths have been reported since an anti-venom was introduced, and that was in the 50's.

Brostenen: I am sorry to say this, but that story about the "venomous" spider is bullshit or should I say a tall tale ? Cause if you are talking about "daddy longlegs"("stankelben" / mejere https://da.wikipedia.org/wiki/Mejere) aka. Opiliones Then I am sorry to inform you, it is not true.

The only snake we have that is venomous is the vipera berus variety aka. the adder

Brostenen: You are a cool dude, but I really dislike tall tales, or in Danish ammestuesnak/skrøner.

Another YT channel I like is that guy who feeds shad to his backyard bass and turtles.

Hmmm.... Everyone around me, have said these things. So yeah. That is perhaps a perfect example of fake stuff, going around on a daily basis.
Like even on our national news corporations website, you can sometimes read articles, that the viper is no more venomous than a yellow jacket.
And I have read on that site, that the spider have the most venemous poison of all, if you retrieve enough of it in a jar.

EDIT:
I stand corrected.... I now know how this fake fact came to be. The spider have biological relatives in other parts of the globe, and they
can be quite poisones. Or venomous if you like. And because the species are related, then perhaps this is a misunderstanding.

A bit like the standard sweet red, green and yellow pepper. All my childhood, I was told that the seed's are poisones and have to be
removed before cooking. They are not poisones or anything. It is a misconception, because capsacin are basically a nerve poison.
And because they do not burn, then a stock chilli is way more poisones in general, yet not deadly in any way.

I think this is somewhat how, that fake knowledge of the spider came to be in a way. Though thanks for info. It got me googling big time. 😀

Another YT channel I like is that guy who feeds shad to his backyard bass and turtles.

The best he have done, is "The sting zone". The absolute worst is his shows, as they are a bit too "showmanship".
On the other hand, that is perhaps how you captivate US children.

I have come across a nearly albino whitetail deer (actually piebald) in my backyard, but I can't find the pic I took. 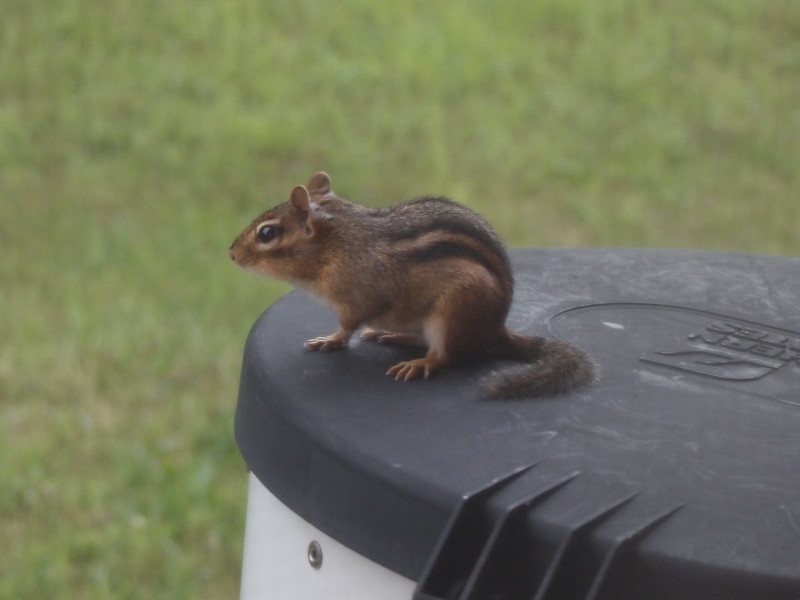 We named him Chippa. He will sit on our flower bed waiting for me to feed him. So I go out and put some seeds on a patio table and he runs over, stuffs his face, and takes a load of seeds to his den. Yeah, he has me trained pretty well.

Yup, it's a chipmunk. They are in the squirrel family as are groundhogs.

I managed to dig up some pictures from summertime.... The bird is one that my cat came home with. It had no injury what so ever, so when it was ok I released it. The butterfly landed on my fingers, and I managed to take the picture before it flew away again.

That guy needs the anti-aliasing unlock.