That is a carefully considered trail of thought and very nice sentiment, no need to apologize!

Those days, I was not much knowledgable about computers that much, hardware-wise, since all I cared about were the software running on it - games, games, games and applications like Wordstar and LOGO. And did I mention games? Adventures from Sierra, Lucasfilm/Lucasarts, Simulations & Strategy from Microprose, RPGs & Strategy from SSI.... aaahh those were the days.....

Coming back to the topic... we (father and I), hence, let our usual go-to tech shop dealer to suggest the hardware to us. It was the time I was given the green light to upgrade my good old 286. And that was a huge jump, since I still only had the 286 when the Pentium arrived. At that time the latest chip was Pentium 133MHz, and managed to obtain that.

I was actually given a choice - order the system with Windows 95 pre-installed ..... or.... DOS-Win3.11 combo preinstalled. Shockingly, I chose the latter. 🤣

Going back a few years before that, I was following up on the advent and progress of Windows 95 via magazines - PC Magazine, Computer World, Computer Gaming World, CGSP, etc. It was a monumental arrival indeed. There were so many moments that still can be seen and read today about it's arrival. It changed the computing world forever, even though it's elements were already available in other OSs. Anyway, I kept reading that it broke away from my favourite DOS and Win 3.11 era experiences, and I was not ready to dive into Windows 95 yet.

As time passed by, and when software ceased to be made for DOS/Win3.11, I finally made the decision to install Win95 from a CD given to me by my friend. Yes, I installed it for the first time myself. And the rest was ...history.

I still have it installed in my Pentium 133 Machine which I still am keeping to this day. The very same machine. And still have Windows 95 installed in it in another partition.

I remember when Windows 95 first can out. Microsoft had a launch party at a local amusement park in Silicon Valley called at the time “Marriotts Great America”. I went down there just to get a FREE Demo copy. It was a warn summer day with clear blue sky.
“Marriotts Great America” Amusment park was where all the local people living in San Francisco Bay Area liked to hang out and let loose.
It was a Nice Amusement park with lots of roller coasters and rides. Allot like Six Flags in L.A.

So I wanted to see if Windows 95 would run on my computer.
At the time I was running Win3.11
I was enrolled in computer education school and was studying Novell Netware CNE certification courses.
And UNIX.

So I got my copy of Win95 demo and installed it on my home computer. It took forever to install and it barely ran
On my 486. Later I added 4mb more for a total of 8mb but that was still too slow.
I later upgraded the motherboard to a VLB with VLB video card.
But that was still to slow for Win95.
So I had to run Win3.11

I don’t think I had Win95 running until I got a AMD CPU and motherboard that I could afford.
I think it was a 5x86-133 or 200mhz AMD or 233mhz AMD CPU.
I don’t remember but it was all I could afford at the time. And I think I paid $35 for the CPU at the local computer components store.
Win95 ran fine but barely with my hardware.

I now had internet. I think I had a 28.8 dial up modem.
AOL and EarthLink and AT&T dialup service was very popular. They would send everyone FREE installation CD’s for there service.
I choose AT&T Worldnet.

And so I was off to Online land.
Netscape web browser and yahoo.com, Alta Vista, Excite.com, and MSN.com
Email ands News groups.

I had internet service on my Win3.11 computer but it was a much better experience on Win95.

I just remember that Win95 would crash if it was NOT setup correctly and you needed a good performing computer.
With Win3.11 and Basic DOS 486 computer worked just fine.

So I had allot of experience and time spent on the Win3.11 computer.
And spent allot of time studying and working from it.
Had lots of Win3.11 programs and apps.
And it served me well.

Win95 was more of a play time for me.
Allot of internet surfing, emails and newsgroups.

I took Microsoft Win95 certification course in school too.
So I learn all the details of Win95 and MS Office programs.

I think I spent more time in school and on jobs working with Win3.11 and NT3.5.1 and WinNT4.0 in working in Silicon Valley.
Win95 was more of a Home use operating system and it had a short life as Win98 was right around the corner.

By the time everyone upgraded there hardware from 486 to pentium CPU windows 98 came out.

At this point hardware was less expensive and more affordable for most people.
I think a pentium MMX 150MHz cost about $75 in 1998.
And a motherboard was about $50

Cool! 😎 Thanks a lot for sharing your story! And for the pictures, too!
While I never have been in the US, I remember the times of amusement parks very well.
They were very popular in the 1990s, also. Perhaps it's because of the current situation,
but there was something special about being surrounded by people who laugh, talk and simply enjoy life.
Personally, I also remember the moments in amusements parks in which I constantly lost my toys (but found them later on), haha. 😅

I still have not used windows 95, or 3.1 for that matter. My first windows pc experience was with ME. I can remember it having issues and a friend of the family came and changed it to 98se. I am currently in the process of going through some old pcs that were given to me and I plan on making one have 95. It is a PII 450Mhz. I'm really excited to try it out.

For hardware that new, I recommended using a later version of Win95 or installing that AMD K6 (?) speed patch, at least.

Edit: Me wasn't as bad per se. It has a pretty CD, for example.
And it was gifted with cool Windows 2000 components.
One problem was that it came pre-installed with bloatware.
And that it was sold as an upgrade mainly.
Installing Me a top an existing Windows installation resulted in instability.

The only older pc I have is a 386/486 hybrid system and I feel it would be too old for 95. Do you think the Pentium II wouldn't be a good choice?

The only older pc I have is a 386/486 hybrid system and I feel it would be too old for 95. Do you think the Pentium II wouldn't be a good choice?

No, no. Seems fine. Ironically though, I used Win95 (original release) in my childhood essentially on 386/486 systems only. At home, we got in contact with Pentium systems a few years later,
when Win98 was on the horizon..
That's why I can provide little help only with Win95.
In fact, I used Win XP on a "modern" Pentium 166 MMX, initially. 😅

I have a few vintage computers I am putting together for nostalgia. I have the hybrid system that is planned for dos, a pentium 2 450mhz and a pentium 3 which I tentatively plan for 95 and 98, pentium 4 for windows 2000 or ME and an AMD 64 for xp. It's also a side project for me and my daughter, she wants to learn computer stuff too. She caught the bug I think 🤣.

My first experience with Windows 95 was in the form of the second beta. My dad brought home a CD with some Microsoft product betas, and Win95 was one of them.

It had the cool boot splash screen, with the colour-cycling > > > > triangles at the bottom, rather than the narrow bar of the final version. 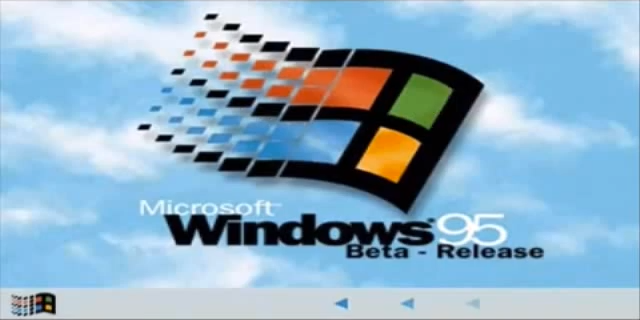 I remember the novelty of the Start menu and long file names, but for a time there was no benefit to it that I could see.

Later the full version became available, and I installed that, but again, as most of my games were DOS based, there wasn't much benefit apart from the cool factor.

Still later, and disks like the Windows 95 Games Sampler came along and changed all that. Suddenly I had a compelling reason to keep using it, and I guess the rest is history!