I would like to post about the current state of Silicon Valley.
As you may have seen on the NEWS California hills and forest are on FIRE.
Or at least they were.

Northern California has suffered from some terrible Forrest fires.

Which brought allot of smoke and ash into Silicon Valley.

A couple of weeks ago we had a lighting storm that lasted all night and Morning that went on for hours.
One lighting strike after another. I read over 7000 strikes.
One went off very close to my home that caused the car alarm to go off.
It was a BIG BOOM.
Like a Bomb going off.

The lighting storm was very scary.
With some rain storm burst too.

This lighting storm started fires in the surrounding mountains and hills.
Most of the mountains and hills surrounding Silicon Valley were on fire.
Severe fire storms and we were in a heat wave too.
Hottest temperatures ever recorded in California.
The hills and forest were dry from the heat wave.
So there was allot of Dry fuel to burn.

Most of the fires around Silicon Valley have finally burned out.
But they burned up the surrounding hills and mountains.

These hills and mountains have never seen such fire storms.
They hill have NOT burned in many many years so there was allot of fuel to burn in dry trees and grass and brush.

I have lived here all my life and have never seen such fire, destruction and smoke and ash.

There is NOW allot of smoke and Ash coming from NEW fires further north of Silicon Valley and from a county in the Central Valley called Fresno.

Also smoke and Ash coming from Oregon state fires. The smoke and ash is finding its way to Silicon Valley.
We had a few days where the sky was orange. Smoke and ash was so thick that the sun light turned the sky orange like a sunset
The entire sky was an orange glow.
It was very scary. Looked like an Apocalypse.

We had orange sky’s for about 3 days.

It’s cleared up now but there is still allot of smoke and ash in the air.

The Air quality in Silicon Valley the worst in the world right now.
It terrible. I will not even go out side and people are asked to stay indoors.
The air smells of smoke, ash and chemicals.
Ashes are still falling in Silicon Valley like light snow.
Cars and windows and pavement has a light covering of ash.

It is going to take a few more days for the smoke and ash to clear up.

As for NOW stay away from the San Francisco Bay Area. They air quality is terrible.

Yeah, They just finished filming the Matrix 3 and I think they did a Spider-Man movie too in San Francisco.
But Yeah you could get some good film footage from this disaster.

Makes you wonder how much worse it can still get . Better not speculate, bad dreams can come true...

You know what every "global disaster" movie from now on will be called.

They used to do controlled burns to reduce the fuel load... now the fuel load is reduced by the nature and this can't be controlled. Result is devastation 🙁

I live in the foothills but forest fires in our vicinity have become an almost annual tradition over the last 10 years or so. I'm getting used to the smoke, that's how I know it's late summer.
It used to be less frequent. I feel like there must be an arson fad going around, or maybe some of the trend was because of PG&E.
The good news I guess is that with every fire we get a little more fireproof.

This year lots of fires started from a dry lightning storm, then a few days ago another fire started much closer near a campground (no, they're not allowing campfires right now). I have to presume some jackhole is to blame for that one.
The spread of that fire has been in a favorable direction (for us), and it's also running into a previous burn scar. It's not looking like a big threat (to us anyway), but there's so many other fires going on right now that the updates have mentioned a shortage of resources to deploy against it.

We recently drove through the burned out remains of another fire from ~15 years ago. It was an interesting scene. Lots of dead sticks but also lots of baby trees coming up, and a fair number of big scarred ones that decided to keep living.

PSA: If you have a drone, please do not use it to look at forest fires.
That was a recurring problem during a fire that threatened us a few years ago. Drones are a threat to low flying aircraft. Once a drone is sighted, airdrops have to be called off until it leaves. Residents at the fire meeting were pretty ticked that it kept happening.

Also I just saw a video from the local fire dept demonstrating a new siren they use now (I assume it's statewide). If you hear a European style 2-tone siren, which cops here do not traditionally use, that's an evacuation signal. Especially important if they don't have time to go door to door.
If you hear the British coming, it's time to leave.

I think if someone says "if you hear a siren..." then it's already time to leave.

This looks absolutely horrendous. It does look like the end of the world. At first it looked like a bad photoshop like those that my mother sometimes makes 😜
That must be a nightmare. In some way it does also look awesome.

This was what the Camp Fire did to the rental I was living in. At 7:30 that morning, all news reports were that the fire was small, and far away from Paradise, so I left as I would have on any other day. I saved nothing but the clothes I was wearing, and I used a company vehicle so I lost all of my vehicles as well. 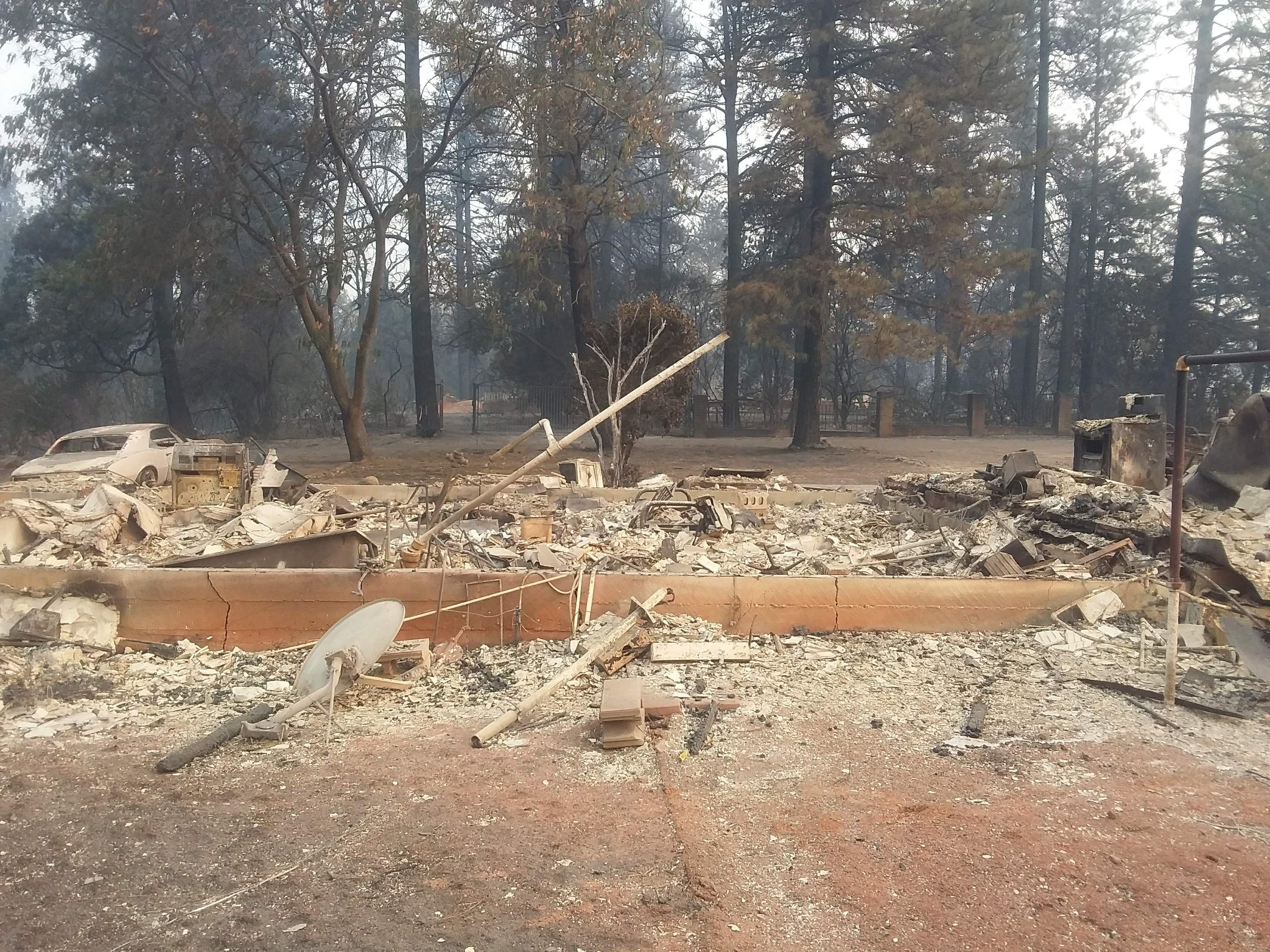 Haha, I remember on 1 Jan. 2012 scaring people on various online forums by saying the world was about to end.

They used to do controlled burns to reduce the fuel load... now the fuel load is reduced by the nature and this can't be controlled. Result is devastation 🙁

devastation + blame it on man bear pig...
Makes the problem even sadder for those that lost property or lives as the problem will likely never be fixed.

The Air quality is really bad in Silicon Valley right now. Worst Air in the world I have read. It smells like burnt chemicals.

The Air quality is really bad in Silicon Valley right now. Worst Air in the world I have read. It smells like burnt chemicals.

yeh Australia had worst fire seasion on record start of the year, was so bad they had to run a big international tourism campain telling people what hadn't burnt down once it was over, by then the peak Christmas/New Year holidiy season was finished.
Then the floods came to ruin anyone that did make the trip.
Then the virus came to cancel holidays globablly.
Then the facebook posts requesting to cancel 2020 😉

It's bit late in the year for California though isn't it? We quite often leese your equipment (helecopters ,etc) during the Australain fire season as yours is over

It's bit late in the year for California though isn't it? We quite often leese your equipment (helecopters ,etc) during the Australain fire season as yours is over

Our peak fire risk is probably August to September. The weather has cooled recently so maybe that helps a bit but it's still very much fire season until the rain comes back.
I checked some old files I saved on a couple nearby fires, one of those in 2014 started September 13th and as of this date was at about it's "peak scariness". It wasn't reduced to a largely contained, minor concern until the end of the month.