that's a nice video thanks!

interesting that some of them, like the death star and bigger would start exerting their own gravity by their sheer mass (unless they're made of light materials)

Whoa! Just watched this video about two days ago! 😯

A bit more static than the video, and only for ships about 100-24,000 m but there's something I've always liked at DeviantArt.
https://www.deviantart.com/dirkloechel/art/Si … ships-398790051
(Hope I'm not wasting people's time by telling them about something they already know about.)

Thanks for the link! 😀

I was looking for the "Comet" from Captain Future cartoon and the "Valley Forge" from Silent Running, but these pictures are so huge! 😅
Anyway, perhaps my taste of movies is too strange also.
Makes me wonder if the original 1970s "Battle Star Galactica" is somewhere hidden in the picture. Or "Lex" from the Dark Zone. Or the "Dark Star" from the movie of the same name. 😀

Actually there's a Columbia class from Battlestar Galactica 1978 just to the right of the Dune Heighliner. Presume that's the class name for Galactica.
And the Lexx is just a bit above the City Destroyer from Independence Day.
(With the Silent Running just below the Lexx. And I think the Comet is just above the Lexx. Weird coincidence.)
(And to find those the Heighliner is the cylinder on the left about 7/8 down the image. The City Destroyer is the flying saucer on the left that takes up about half the width of the picture about 3/4 down.)

Though I agree it's pretty hard to find things. Definitely needs some some sort of key as a guide.

[Sorry, this post turned out to be much longer than I expected (I'm at work, and bored). It's a "My favourite space-ship is the [your answer], what is yours ?" type post, please feel free to skip my fan-warblings about why I choose the TARDIS, and go straight to posting your own favourite and the reasons why you love it.]

The TARDIS is the best space-ship ever! It can travel to any point in the universe, to/from any other point in time and space, from the Big Bang all the way up to however the universe ends. It's almost indestructible (er, except for a few of the very early stories of Doctor Who, when the TARDIS was said to be vulnerable to even hand-held weapons, but then it's near indestructibility was accepted as canon), it doesn't travel conventionally (i.e. it doesn't pass through the space between the starting location and the destination), instead it can disappear from the starting location, and appear at the destination, as it instead leaves real space to travel through the space/time vortex. Er, except when the stories require that the TARDIS is flying through real space (such as if a close by space-ship sends a distress signal).

It's bigger on the inside than on the outside (potentially how large the inside can become is never explicitly stated, though in one novel the TARDIS materialises around the Earth, so that the entire planet is contained in the TARDIS), and it's interior can be easily reconfigured by the using the ship's controls and software, as can the exterior appearance and function of the ship, though it can also automatically assume a suitable physical form to blend in with the surroundings, if desired.

The reason the Doctor's TARDIS always looks like a Police Box (which is an old telephone box for use by the police, used in London before hand-held walkie talkies were developed) is because when the Doctor stole the TARDIS (to get away from his home planet, and explore the universe) it was due to be repaired, and when the TARDIS landed on Earth and it judged a Police Box to be a suitable form of camouflage for that area and time, then the chameleonic circuitry changed the TARDIS' outer form to look like a Police Box, then the chameleon circuitry erroneously locked up, making it impossible to change the shape of the TARDIS. The Doctor later fixed this, giving the ship the ability to look like anything, but decided that he liked the look of the Police Box, so he kept it. As he says in one of the later novels "I like what it stands for - ask for help and I'll be there" (paraphrasing, I can't remember the exact quote).

The TARDIS also has a low level of intelligence and something partly like consciousness (this is hinted at in a few of the later episodes), and unlike most space ships it's unarmed (the Doctor hates weapons, and his race, the Time Lords, who created the TARDISes, are pacifists who's intelligence and levels of technology are so great that they are very rarely in danger (the Doctor being an exception, in that, since he chooses to become involved in the affairs of other species, then he does sometimes become a target of his enemies, even though he himself hates violence). The inside of the TARDIS exists in a state of 'temporal grace', meaning that weapons don't work in there.

Another great feature of the TARDIS is that it can translate any known language, and telepathically 'dub' the hearers minds with the words (written or voiced) that the hearer would understand. This means that the Doctor, his companions, and whoever they are speaking to, can speak (or read and write) any language ever, be it human or alien, even though it seems to everyone involved that everyone is speaking his own particular language. I.e, if the Doctor, and someone from say, the twentieth century Britain, someone from eight century France, someone from Turkey round about 4000 BC, and an intelligent giant alien slug from halfway across the universe were conversing together, then the twentieth century Brit would think they were all speaking twentieth century English, the Frenchman from the 8th century would think that they were all speaking 8th century France, the giant slug would think that they were all speaking it's own language, and so on. This happens inside and outside the TARDIS, but for exterior use, anyone involved has to be within a certain distance to the TARDIS (the distance is never given in the stories). It's just a way to fix the common science fiction plot hole of how everyone in science fiction seems seems to speak the same language, but it's as good a way as any, I think.

The TARDIS' power supply is infinite (again, except when the story calls for the TARDIS to be running out of fuel, but pretty early on the accepted canon became that the TARDIS's power supply never ran out) because it basically feeds on the energy of the universe. This is described in Doctor Who lore as being a black hole that was stabilised by the Time Lord scientist Omega, resulting in a point of singularity that exists simultaneously within every TARDIS, at one (or more) points on the planet Gallifrey, and everywhere else that the Time Lords with to supply an endless amount of power to). Of course, this being Doctor Who, there are probably another five or more contradictory, mutually exclusive, explanations for the Time Lord's endless power supply (and anything else DW related), as you'd expect from a series of TV programmes/novels/comics/radio shows/audio dramas/etc that's been going for fifty-seven years. There are many great things about Doctor Who, but continuity is definitely not one of them. BTW, the Doctor in in the Guinness Book of records as being the fictional character with the most books written about him. 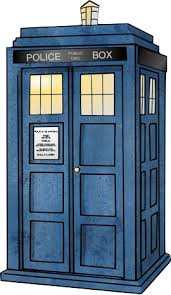 Anyway, the Doctor's TARDIS is old and obsolete, being an ancient Type 40, but he loves it. He doesn't want a newer one, though he does upgrade parts of the TARDIS and occasionally adds more features and functions. More modern TARDISes have more impressive abilities, such as being able to assume the form of living creatures, and can, for example, pass fully as a human being, simulating a full personality and social life, to blend in perfectly on Earth or other planets where humans live. These more modern TARDISes are extremely intelligent, and unlike the Doctor's TARDIS, they can communicate with their user/owner, and suggest or discuss extremely complex matters and courses of action. They can create a full simulation of life and user-definable ecologies in their interiors, sort of like Star Trek's Holo-Deck but on a much larger scale.

So I definitely choose the TARDIS as my favourite space-ship. What's yours?