I wonder how much it actually imitates Win95, or if it's just a skin deep appearance.

I remember there were always skins in older Linux distros that claimed to imitate Windows but they were pointless because they still didn't operate any differently. As soon as you clicked the "Start" button you were back facing Gnome or whatever it was running. There were a surprising number of people claiming those skins would help people migrate from Windows but I couldn't believe they were serious. It's like they really thought the usability issues people were having was because of what the icons look like.

I feel the same.

Some people think the same of loyal XP users these days, I think.

But as you said, the icons and a few wallpapers are just a part of it.

Still, it's kind of interesting to have a modern Linux with such a theme available.

A modern PC running it might fit quite okay
next to a retro PC running Windows 9x.

weird. FVWM95 was a thing in like 1996. I guess a lot of people these days dont even know window managers like OLVWM/FVWM/CDE/Open Look etc existed outside of Gnome + KDE.

I remember them fondly... these days I'm like "I don't see what extra functionality you're giving me for the additional 1032MB memory consumption vs what used to load in 16MB on a 486"

It's like they really thought the usability issues people were having was because of what the icons look like.

To put it slightly poetically:

Two men were walking down a road in the savanna when they noticed a leopard following them.
One of them bows down to fasten his shoelaces.
The other remarks, "What do you check your shoes for? If that leopard decides to eat us, you're not going to outrun it."
- "I don't need to outrun that leopard, I merely need to outrun you."

By the very same logic, I'm using linux since over 10 years and never regretted it.

Sure, some GUIs had some quirks that were ourright retarded. Like KDE forgetting the clipboard upon closing the application.
And my unix kungfu is, well, limited.

But hell, Windows?
Screw that shit.

Looks a bit off. Lots of weird padding around the place.

I think SerentiyOS does a much better job of "unix-like but looks like windows 95" though its not really trying to emulate Windows 95 specifically but rather that era of desktop software. More of a late 90s look: 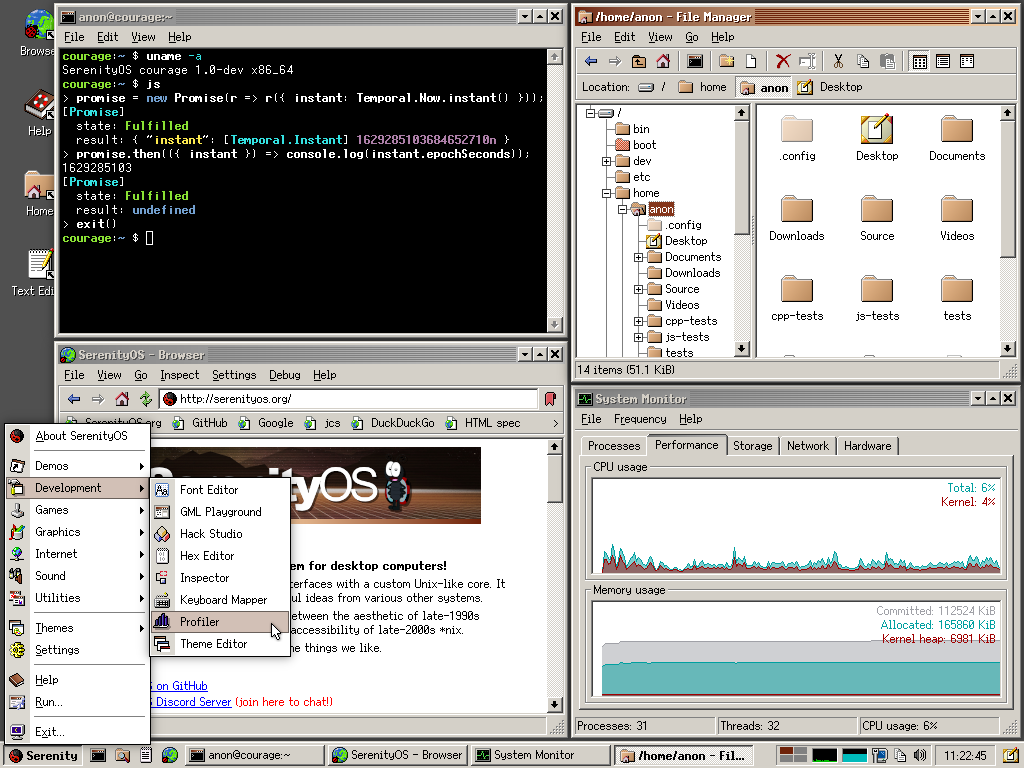 It's interesting while I suppose the kernel should still be the latest version and not really "light" but I suppose it might keep the good sides of using something like the old LXDE gui did compared to other ones that didn't even need all the modern opengl acceleration or useless animations/effects.

it's not a distro. It's just a massive xfce-theme (which probably won't last long now)
https://github.com/grassmunk/Chicago95

and as such, will do nothing about resolving compatibility with plus themes/icons/fonts/savers etc. and still won't make you unresolved of the "2 different chromes" browser problem.

Oh god, I like it! I need to try out this distro

There was also Lindows>>Linspire>>Freespire... https://www.freespire.net/ but I don't know how windowsy it remains now. I had the impression it tried to integrate Wine into some kind of program manager so it ran executables like it was windows but not sure if the MS gatling cannon loaded with large caliber lawyers put paid to that in the Lindows days.

Linux has usability issues for people who are used to Windows, and especially so 10+ years ago, that's all I was saying.
I don't like modern Windows, but Win98 - Windows 2000 and XP with themes disabled is my favorite GUI. Win95/NT4 is more spartan but it's fast and appropriate for P1 era hardware.
Win8 was the turning point when I decided that if I'm going to learn to live with a new GUI, I'll do it with linux instead of Microsoft. At least linux gives you more options to pick your desktop environment and ultimately more control over many things, difficult as it may be sometimes to exercise that control, at least it's there. My investment into a GUI with linux is worthwhile because I don't think I'll be forced to keep changing it every time a new trend comes along.

I tried various linux desktops off and on since ~2000, but I had a hard time with them. It would be a novelty for a while and then I'd get worn out. Linux has always been great as a console driven server OS but it's desktop experience took forever to get decent.
I used to grumble that there was no linux GUI that could combine the usability and performance of Win2k or NT4. Decently featured GUIs ran like ass, and fast GUIs were too bare, almost like raw X.
Nowadays computers are faster and I've gotten pretty comfortable with MATE, but I can still get annoyed occasionally. I use a mix of Linux and Win7 on my modern machines now. I won't install Windows 10/11/whatever except on a future, dedicated game machine when I have no choice. I can't afford to build a new PC right now so this isn't on the radar. Some games are starting to require Win10 but I just don't play those.

In my opinion a fundamental, unavoidable factor that hinders the linux desktop is the fragmented archipelago of it's development. The GUI experience is dis-integrated and this makes it frustrating to figure out how to do things that a Windows user expects to be easy to find from multiple directions. It's theoretically the job of the distribution to create a well integrated experience, but they can't accomplish that as well as Microsoft can.
For example, some control panel app will have some set of options in it, but it's missing the option you're looking for, and there's no linkage between those control panel apps to redirect you because they're made by different people and nobody knows that both those apps will exist on the same system. Microsoft can tie everything together in a consistent way because they're in control of all the parts.

Random experiment - I just tried click+dragging an icon in my MATE "quick launch" taskbar (whatever they call it). I wasn't surprised that it won't move that easily. If I really wanted to rearrange them, I'd have to dig deeper to figure out how. Little things like this can wear people out.
I run into dumb problems sometimes, but there have also been some wins so it's a mixed bag between MATE and (classic) Windows. Linux+MATE is definitely my primary OS now though, and Windows 7 is secondary.

Yeah, for those reasons I've thought for a while that Haiku has a better chance at the desktop than Linux. At least it would if it had good browser and better drivers.

Sigh, lies are so annoying but no one would click if they didn't.

Random experiment - I just tried click+dragging an icon in my MATE "quick launch" taskbar (whatever they call it). I wasn't surprised that it won't move that easily. If I really wanted to rearrange them, I'd have to dig deeper to figure out how.

To be fair to MATE, I should follow up and say this turned out to be very simple. You have to right click and unlock the icons individually to move them, I had looked for a global taskbar lock but it doesn't work that way.
I was expecting I'd have to use some separate utility to rearrange them, but no you can just click and drag once you have them unlocked.

An unexpected issue I've had with this install is that occasionally the desktop crashes. There's some magic key combination to reboot the GUI, I've had to use it sometimes. These events are pretty rare, but it never happened on NT series Windows on the same machine.

On an older install of Mint, I had repeated issues with my dual monitor setup getting randomly broken. I have duals still on this install but I've been avoiding screen rotation, avoiding putting icons on the 2nd monitor, and I'm afraid to ever disconnect the 2nd monitor for fear of what insanity might result when it finds a screen missing (my older install had destructive tantrums from that). But I might need to give it another chance, maybe that's been stabilized.