Hey, was anything found on the above plasma glow issue?

Hey, was anything found on the above plasma glow issue?

Was this issue fixed only partially? I thought it's working with the 2.63.1, I mentioned it in the changelog (Fixing a minor D3D DXBC generator bug (Halo CE)).

hmm, it still looks the same in the latest stable and the latest WIP.

Umm, ok, thanks! Then I'll check it out, I may ask for a savegame or sg like that if it requires a special weapon/location to reproduce.

Load the MP map "damnation" and there is a plasma rifle on the ground (weapon in that image) in a room that is directly next to the waterfall.

Are the shaders "universal"? So can I copy them from the PC to the Mac-Version?

I did some additional testing for the MacVersion:

Core2Duo MacMini Nvidia9400m shared gfx. Mac OS 10.6.8 with Halo Mac Universal DVD-Version 2.0
- Vsync is broken. Activating Vsync leads to strange fps and hickups. 30fps setting is working OK.
- Shaders are set to vertex+pixelshaders (advanced shaders produces flickering on some textures)
- Lightning, shadows seem to be ok. for the reflections and the bumps I am note sure.

If I update this universal (ppc+intel) version to the next version 2.0.2 I get broken shaders and broken lightning.
Vsync is fixed though but now the game is ugly. If I only interchange the binary it's also broken...hmm strange...

How are the floor-textures in "Two Betrayals" supposed to look like...are they shiny glass or are they blue metallic?

Load the MP map "damnation" and there is a plasma rifle on the ground (weapon in that image) in a room that is directly next to the waterfall.

Thanks! (though I used cheat_all_weapons instead, proved to be more simple)

So, I debugged how the plasma riffle is drawn and turned out that the glowing plasma-power is always rendered but with varying transparency factor.
For example, it's clearly visible when it's lying on the ground. Or, when I hold it in my hands and make a shoot then it fades away gradually.

It's not clear for me exactly how, but the results of some occlusion queries also affects the value of the transparency factor. The more visible pixels the more opacity.
The thing is, when resolution is forced (to be larger) through dgVoodoo then occlusion queries report more visible pixels than expected, that's why the glow isn't (almost) fully transparent.
I tried the game with unforced resolution/MSAA and it worked as expected in that case: 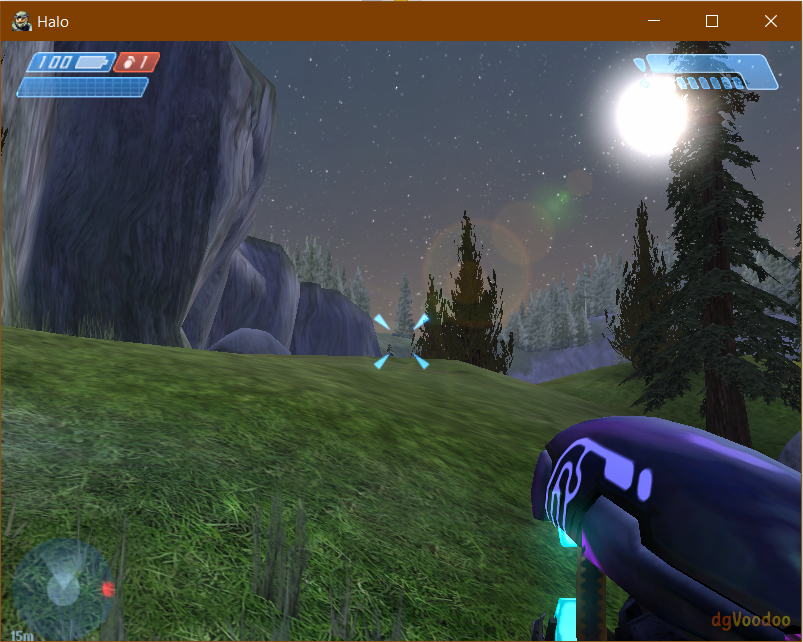 The solution would be scaling the result of occlusion queries according to the resolution. I'll consider it for the 2.7.x series (but not for 2.6.x).

Are the shaders "universal"? So can I copy them from the PC to the Mac-Version?

I don't think that. Probably the sources that they are generated/compiled from have common roots.
But PC version works with DX bytecode shaders that aren't compatible with OGL glsl-shaders the Mac version need (I don't know the Mac version at all though, I just guess it's OGL).

Hi there, I managed to get Halo on Mac working with HD3000 by using HaloMD and copy the campain from Halo to HaloMD.
HaloMD seems to have fixed most of the issues. But Bumps are still wrong...

btw. shaders used in riddick are "universal". it worked copying that patch to my mac installation: https://www.moddb.com/mods/the-chronicles-of- … nhdr-shader-mod

I have a question, just out of naivety.. Why should we use dgVoodoo with HaloCE when Chimera exists?

I have a question, just out of naivety.. Why should we use dgVoodoo with HaloCE when Chimera exists?

Well, they both achieve two different things. Using dgVoodoo for Halo allows you to enable proper hardware anti-aliasing, along with fixing shaders on PC without any workarounds. Chimera just adds fixes and QOL changes to Halo.

Total noob here. I'm using Chimera, which disables Halo's in-game gamma adjustment setting, and specifically recommends dgVoodoo2 as a workaround. So I really only installed it to boost the brightness a bit.

Anyway, I'm encountering an issue where certain elements (textures?) appear completely white, or in one case, black and white.

I'm playing Halo Custom Edition with the 1.0.10 patch. OS is Windows 10 version 1909. GPU is a Radeon RX Vega 64. If anyone could offer suggestions, it would be much appreciated. Thanks in advance!

You need to set Output API to Direct3D 12.

You need to set Output API to Direct3D 12.

While that fixed the issue I described, it also seems to disable the brightness adjustment, which unfortunately defeats the purpose of installing it in the first place. The brightness looks identical even when it's set to 0% or 400%.

Edit: Checking "Inherit Color Profile in full screen mode" seems to fix the brightness issue with DIrect3D 12. Thank you very much for the help!