Wrapping sound with dgVoodoo in the future?

Сan I ask a stupid question? Are any processor instructions used to speed up wrapping? well, at least the same avx for modern machines ... because directly games often give more FPS than through the same dgvoodoo2.
And do you have plans for wrapping not only directx on graphics output, but also for sound with activation of the same eax from cerative?

I don't understand this sentence.

OpenAL Soft can't give you 5.1 where DS3D did provide it. OpenAL Soft by design uses center channel ONLY for dialogues and never uses LFE channel.
So you got a 5.1 actually downmixed to 4.

Hello, one of the few to care about proper use of the LFE channel. I found this on my endless search to find out why OpenAL NEVER uses the LFE channel [in games]. I believe I have determined that this is primarily an OpenAL issue and that for some reason PulseAudio doesn't do bass redirection with OpenAL games.

So I first came across this issue when I was playing Amnesia in Ubuntu. I had played Amnesia in Windows and had LFE but why not in Ubuntu? Come to find out that I was using bass redirection in Windows so I disabled that feature and went on an LFE testing rampage in Windows-based games. No OpenAL games used the LFE channel while DirectSound, XAudio2, and FMOD games used the LFE channel; some games using those APIs didn't use the LFE but some did which leads me to believe that it's up to the programmer(s) to enable that feature. Perhaps OpenAL outright lacks the ability to route low-frequency audio to the LFE or perhaps it would require a lot of additional programming to implement and no one cares enough to do it in their game.

I went back to Ubuntu to figure out how to do bass redirection and what I found was that, even though I successfully had bass redirection working in music by enabling LFE-remixing in the Pulse config file, it wouldn't redirect bass in Amnesia (with default PulseAudio as the device in Amnesia's settings). Pulse should be able to redirect the bass if the audio is being routed through it but maybe it's not entirely understanding OpenAL and dropping the ball.

We know that the LFE is available in OpenAL because it plays that channel when you test a 5.1 wave file through it (I've at least done that in Windows with the dev software) but utilization of the LFE seems totally absent in games so it seems the only way to get any subwoofer activity from these games would be for the OS's audio system to do bass redirection.

To work all this, you must first run alchemy, because it registers dll so that his game picks up, etc. and I don’t need to give personal examples that everything works, I’ve been faced with this for several years now.
I do not know about you, but alchemy in f.e.a.r. worst of all, the sound result gives, but dsoal the required volume is all in place. Worse will only be 3D soundback from realtek and indirectsound.
It’s especially remarkable that you gave a link with freebsdm, which you should be ashamed to consider a system in 2020, some problems with this red-eyed...
The problem is that all the hemorrhoids to use, it would be very nice if Dege integrated their support (dsoal) in dgvoodoo2. Okay, I won’t offtopic anymore, just a wish for improvement in the future.

Ashamed by a thread talking about a known problem of OpenAL Soft? It's a general problem, on all the platforms (Windows too): there's NO LFE signal.
So DSOAL using OpenAL Soft as a virtual device can't give you LFE channel in any game using it.

No need to use Alchemy, you can edit the Windows registry (it's the same tweak needed by Indirectsound) to give the correct scope for dsound.dll.

And why is it impossible to simply automate or provide a ready-made and easy solution?
low frequencies for surround sound in the headphones ... well, I don’t know, even some difference in the monitor headphones is not noticeable during the game, except that in some places alchemy in the distance starts making loud sounds, probably this is the same lfe.

'cause is NOT secure. There's a reason why MicroSoft set the registry keys this way.

open al with rapture 3d driver game use LFE like described in this site http://satsun.org/audio/index.php?sort=api#the_list

It would be interesting if any solution was found. Openal soft doesn't work with all games using openAL and can some versions of openal soft can crash with some
games (Openal soft 1.9 works well but not open al soft 2.0 with quake 2 rtx for example. ).

The proposition of funkerwolf would be a good idea.

It would be interesting if any solution was found. Openal soft doesn't work with all games using openAL and can some versions of openal soft can crash with some
games (Openal soft 1.9 works well but not open al soft 2.0 with quake 2 rtx for example. ).

Still no LFE and on top of this the lastest version (built from the master tree) of DSOAL don't working anymore in Halo CE (Combat AND Custom). Last version working with Halo of DSOAL is this: http://vaporeon.io/hosted/dsoal-builds/

KCat's OpenAL Soft is a fork of OpenAL developed by Creative Labs (the base for ALchemy). ALchemy hasn't been updated in years and poorly recreates games' original audio effects.
For instance, ALchemy has a bug that forces reverb on all positioned sounds in Halo CE even including sounds that aren't programmed to have reverb. Additionally, its emulated reverb tends to be much stronger than its legacy, hardware-accelerated counterparts.

OpenAL Soft can't give you 5.1 where DS3D did provide it. OpenAL Soft by design uses center channel ONLY for dialogues and never uses LFE channel.
So you got a 5.1 actually downmixed to 4.

You seem to be under the assumption that OALSoft's LFE and Center channel-handling is limited to Dedicated Dialog and Dedicated LFE (part of the ALC_EXT_DEDICATED extension).

LFE is only used if the input stream has an LFE channel.
Center channel can be enabled with the `front-stabilizer=true` setting.
Source: https://github.com/kcat/openal-soft/issues/36 … mment-554020938

kcat explains that OpenAL Soft's LFE output is silent unless fed by an LFE input channel. If there is no LFE channel in the input stream, OALSoft will not output LFE. In this case, the only way to output LFE from a stream lacking a LFE channel is to use frequency crossover—a feature not present in OALSoft 1.19.1 and I don't see it as an added feature in either 1.20.0's or 1.20.1's change log.
However, 1.20.1's change log mentions three channel-related changes.
Source: https://kcat.strangesoft.net/openal.html

LFE is only used if the input stream has an LFE channel.

And why a 5.1 wave file constructed to have it doesn't play correctly in foobar2000 avoiding ANY channel mixing (there's a dedicated plugin for that)?

I see the spectrum representation *graphically*, so the input is passed in foobar2000 to the openal plugin by the channel demuxer plugin.
But NO AUDIO. 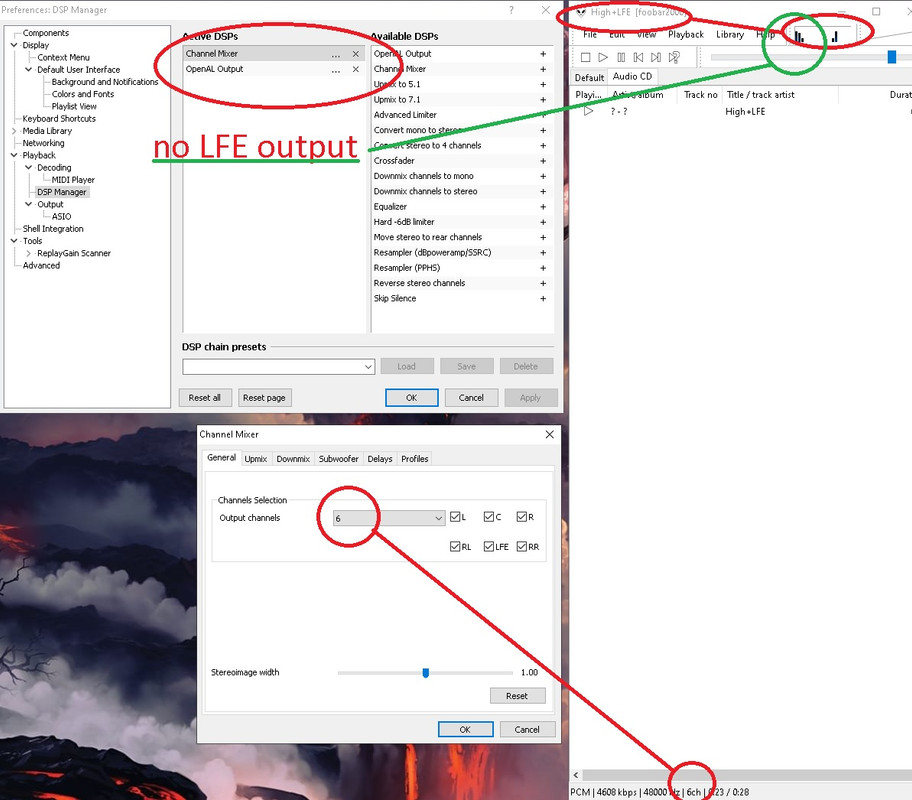 No redirection, only pure subwoofer.....the input data are there, the ouput audio no :p (OpenAL Soft 1.20.1 self-built from the master tree ma the result is the same with every recent version)

I split sound-wrapping related posts to this new topic.

Here's the waveform and the channels of my test file: 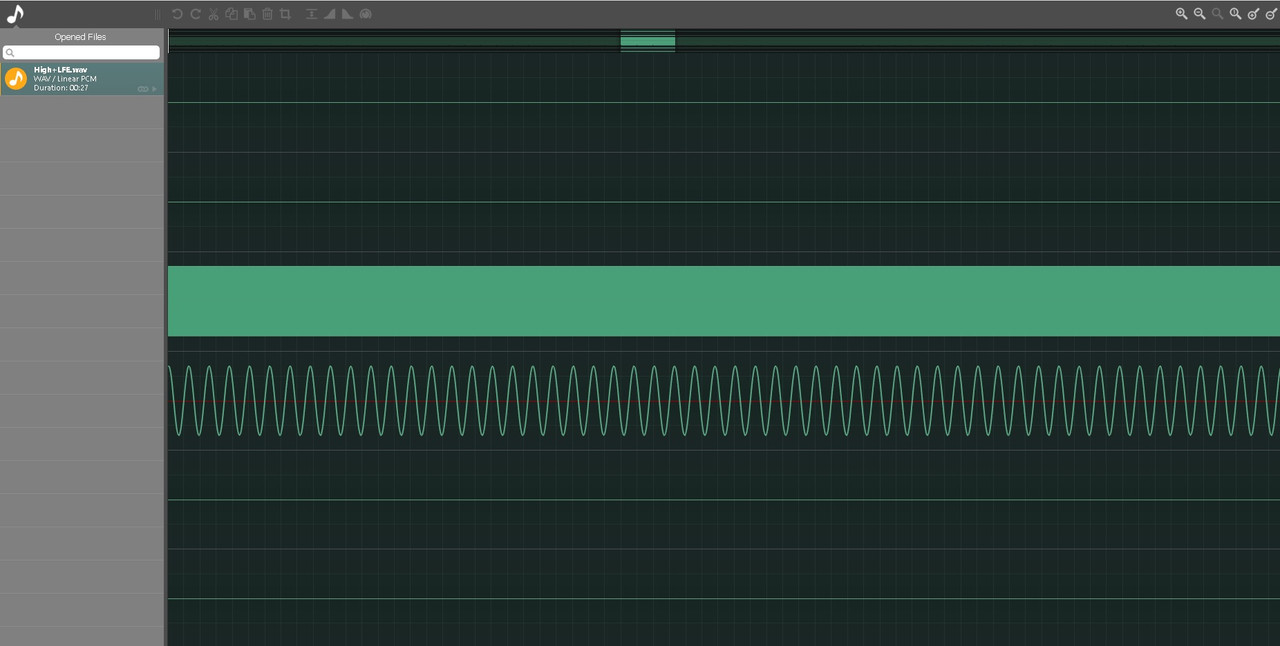 So the LFE is there, foobar can see the data, the channel plugin does the demuxing.....but OpenAL Soft can't give the subwoofer output (the "high" center track is played correctly and of course I have the LFE channel working 'cause I hear the output of that very same file when I use the DirectSound output)

🤣, I've accidentally found the culprit of the missing behaviour.
The "3D mode" ! 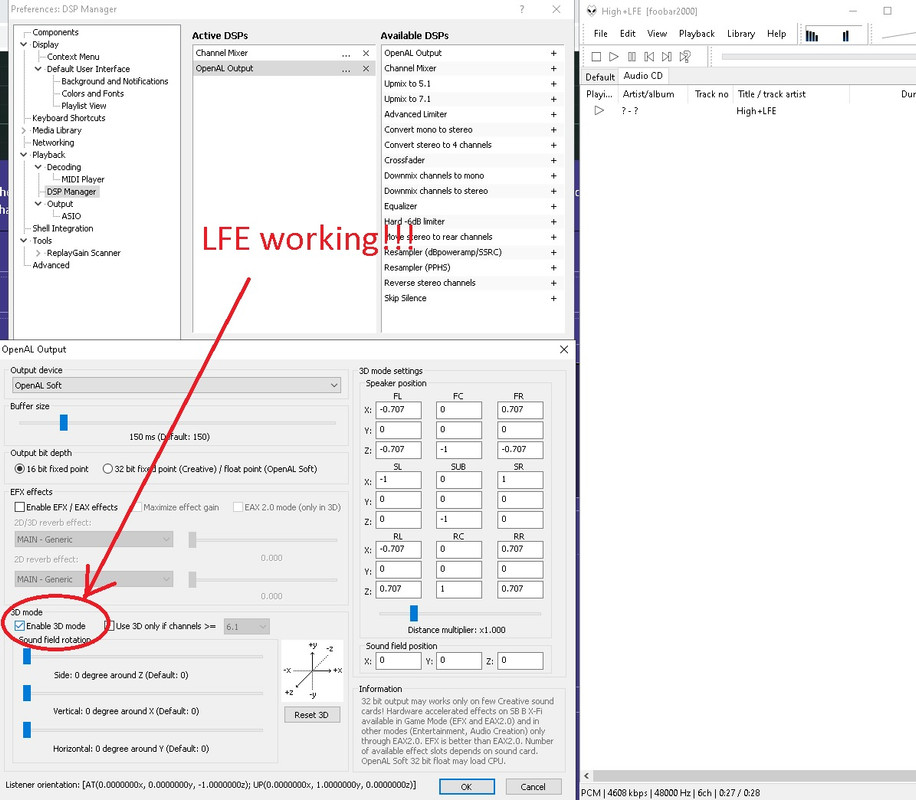 Now the playback of the LFE is correct.
DSOAL must force this thing, someone maybe can report to kcat

How do you even force surround sound in Unreal 2? I have Creative X-fi Xtreme gamer/win10 and no luck with alchemy..
PS - also what is the best way (i mean game) to test LFE and on which software (soft openal or alchemy?)

How do you even force surround sound in Unreal 2? I have Creative X-fi Xtreme gamer/win10 and no luck with alchemy..
PS - also what is the best way (i mean game) to test LFE and on which software (soft openal or alchemy?)

If you want to "test" it you can simply create a 6 channels wav file: 3rd and 4th channel are "center" and "LFE".
And after that you must pass the file to a sound player with openal output plugin. Foobar2000's one is really old (2015)