award bios detected it / however its value of cyls etc was not as expected - in a result it was not 4gb, rather it was 1,8gb but i heard i can accept it

somehow I got my hdd 1,2gb and dos is seeing it as a one partition - yes I created the partition on win98 setup but still...

There are multiple variables involved here:

1. BIOS support for large hard drives. Detecting the drive geometry is not the goal line. The BIOS also has to support LBA. It is possible for BIOS to detect a hard drive of arbitrary size, but without LBA no more than 528MB (or so, depending on how you do the math) is available to the OS. It is possible to disable LBA in BIOS so even when supported it can be inadvertently turned off. BIOS may also limit hard drive size support even with LBA. LBA gets you past the 528MB barrier, but bets are off above 2GB. My DOS machine, for instance, supports LBA but the BIOS won't even recognize a 4GB CF card much less let me try and make partitions on it.

2. DOS support for large hard drives. MS-DOS 6.22 can support and create partitions on hard drives up to 8 GB. Above that, it freaks out and you may find yourself back to the 528 MB limit (or whatever value turns up) or worse. DOS can create a PRIMARY partition of up to 2GB on any supported drive. DOS can create an EXTENDED partition of any size, but LOGICAL DRIVES in that partition are limited to 2GB.

3. Filesystem support for large hard drives. FAT16 can support partitions up to 2GB, which is aligned with the DOS partition/logical drive limit. It can be inefficient to create partitions this large because the FAT16 cluster size scales with the partition size (using 32k at the top end).

ad1 - i have award bios from 1994, in autodetect hdd, it finds this 4gb cf card as drive d: (slave) and its saved as user type, with about 1,8gb - looks like it is supporting LBA however it does not detect it correctly (should find it as 4gb but it does not)

ad3 - i would love to make 2 partitions with 2gb max, but I can not... 504 is possible only and it is assumed as max size of drive

You just need to go into your BIOS and look around. If it supports LBA it's going to say so and have an option to toggle it on or off. Reading the (fake) geometry of the drive isn't enough. A 1994 BIOS on a 486 isn't guaranteed to have it.

You may need to resort to a Drive Overlay software or, if you can, sub in a 2GB CF card and see where that gets you.

The simplest solution is what derSammler suggested.
I prefer the XT-IDE BIOS on an NIC card (with a boot ROM socket). Other people prefer the Dynamic Drive Overlay software route.

EzDrive (DDO) works very well and doesn't need you to mess with any hardware. 😀

With dos 6.22 you can go up to 2GB per partition, as this is the FAT16 limit. The 528MB limit is from BIOS that the EzDrive solves.

ez-drive - thanks!!! i will try it if everything will fail with "standard" approach but first I need to understand what I still do not understand:

- after partitioning on the win98 machine as above, this drive is visible in my 486 as disk C: and I have whole space formatted to fat16

on the same ribbon I have CF 4gb as slave which was partitioned on my win98 machine because of the same issues as above as follows:

- i had to accept large disk support in fdisk on start
- i partitioned this cf in such a way that the primary partition is 1gb (25% of size) and ext partition is 3gb (75%) and this ext partition was logical structured to G, H, I - 33% of the ext part size each

- this cf is not visible in my 486 as disk D:, G,H,I either - "invalid drive" when attempting format command

where is the issue? need to understand it, why hdd is seen /but the cf is not seen? even I made sure the partitions are much less than 2gb

of all operations i described the only difference is the bios detection - hdd was detected right - it is 1,2gb hdd, and cf is detected wrong - 1,8 instead of real 4gb 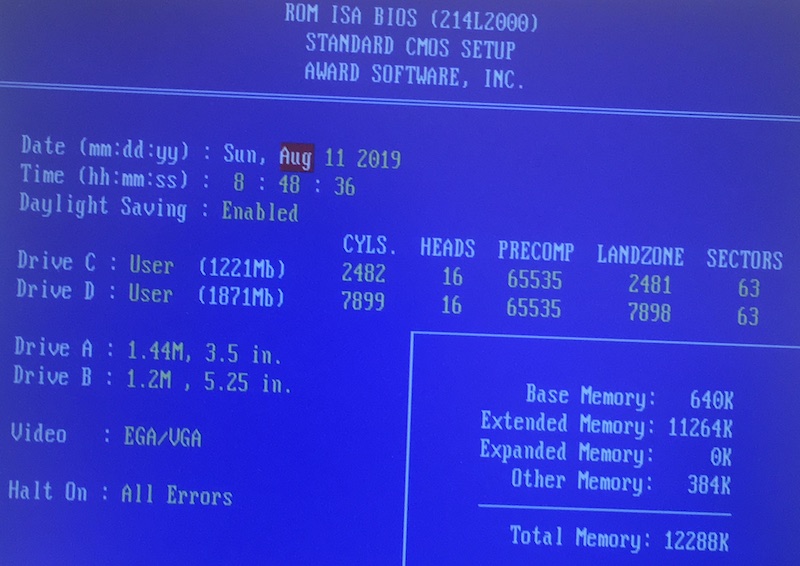 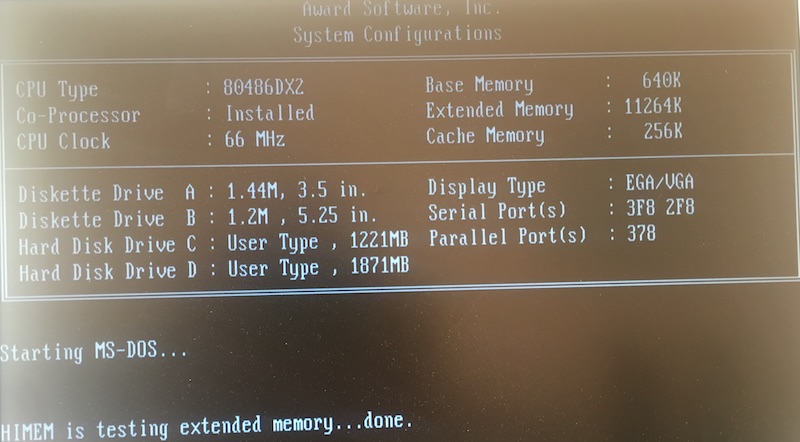 Your bios is still ~504MB limit. So even if you partition the drive on another computer to have bigger partitions than that limit, your limited computer is not able to address that part of the drive and you are just creating trouble and wasted time for yourself with random behaviours and errors...

If you see a ~504MB limit, just use ODD (like EzDrive) or XT-IDE rom chip on NIC to get past that. Don't waste your time on something that anyways ultimately fails. 😀
And not all boards/bioses do have that limit. Generally, the newer the motherboard/bios, the lesser chance to have that limit.

the strange behaviour of having 1,2gb disk seen on dos-fdisk as one partition, even the "dir" command shows I have 1,2gb, is just a fake...
actually dos can not see more than 504mb, I made a test and started copying more than 504mb to this drive, suddenly I got a msg of error (donr remember what)
and after that "dir" just showed random ascii characters on the screen...

fyi - I thought I can cheat the system by doing the partitioning on other computer as follows:

Yes, the 504MB limit is a harddrive limit imposed by bios.

FAT16 has 2GB limit. This is filesystem limit, therefore it is a limit per partition. (So 4GB CF card can be made to have 2x2GB partitions)