Hi,
if I try to start 3dmark03 and 05 on Windows ME it gives me an error of a file and suggestion to upgrade to a newer Windows os. Is there a fix to launch it anyway? I've installet Directx 9.0c and having a Radeon 9500 to try on a P4.
Thanks.

Update: I found in old discussions that the 3dmark03 to run should maybe need an older version of the 3dmark itself not the latest one. But I can't say if 3dmark05 could be solved equally. The error is a 3dmark internal dll and the suggestion to upgrade Windows to run them.

That said, it would probably be a slideshow anyway on a Radeon 9500 .

I read somewhere that the early version of 3dmark03 seems to run but no words on 3dmark05. Unfortunately considering there're many Dx9 cards it would "run" even if maybe slowly. Obviously 3dmark06 is a whole different heavier world but for 3dmark05 I ran it with Win8.1 on a dual Atom/GMA3600 integrated Dx9 core even if with the incredible result of 750 points! 😁
I think there were faster cards back when Win 9x was still a common o.s. I remember the Radeon 9500 @ full 9700 did run the test, slow but not too much slow.

I had to use an external monitor IIRC because the programs would complain about the size of the gimpy inbuilt screen.

I had to use an external monitor IIRC because the programs would complain about the size of the gimpy inbuilt screen.

Eheh the good old Atom related "problems". I had the N270 in the early Acer netbook, the N450 in a Asus netbook and some D2500 in mini-itx boards. The latest is a good soc imho but had a big community story in both win and linux memories about its gpu compatibility with a 32bit o.s. oriented gpu, 64bit cpu, few Win7 32bit only drivers, linux saw the gma500_gfx kernel module much later (and works really ok but only in 2D)..
At the end in a mini-itx board I got to install latest Win7 drivers on Win 8.1 and works incredibly "well" with effects and fast speed, also the gpu run 3D acceleration and numbers are: 3dMark2000: 1400 points (it's strangely low), 3dMark2001: 3900 points (higher than 2000's), 3DMark2005: 750 points. I couldn't try 3dMark03 probably for similar problem of 3dmark05 that run but only with -nosysteminfo option that doesn't work on 2003 test. The cpu is the one without HT and with the 400Mhz gpu version, maybe the D2700 with both HT and more than 600Mhz gpu get higher numbers.
Still I wasn't expecting anything to run at all not having Win7 to try but at the end it was interesting to -finally- see its gpu rendering anything 3D related. 😁
Interesting thing the mini-itx board has full 4GB single DDR3-1066 installed limited manually in the o.s. @ 3GB (I don't remember maybe to solve some problems with drivers installation), and without 3D running the whole board ask for aroud 15 watts, with a 3D benchmark something like 2 watts more.. 😀

3DM03 build 360 can be run under Windows 98, so it should work under ME. Try again by adding "-nosysteminfo" (without quotes) to the exe (shortcut). Same goes for 3DM05.
KernelEx and SP 2.1 installed. 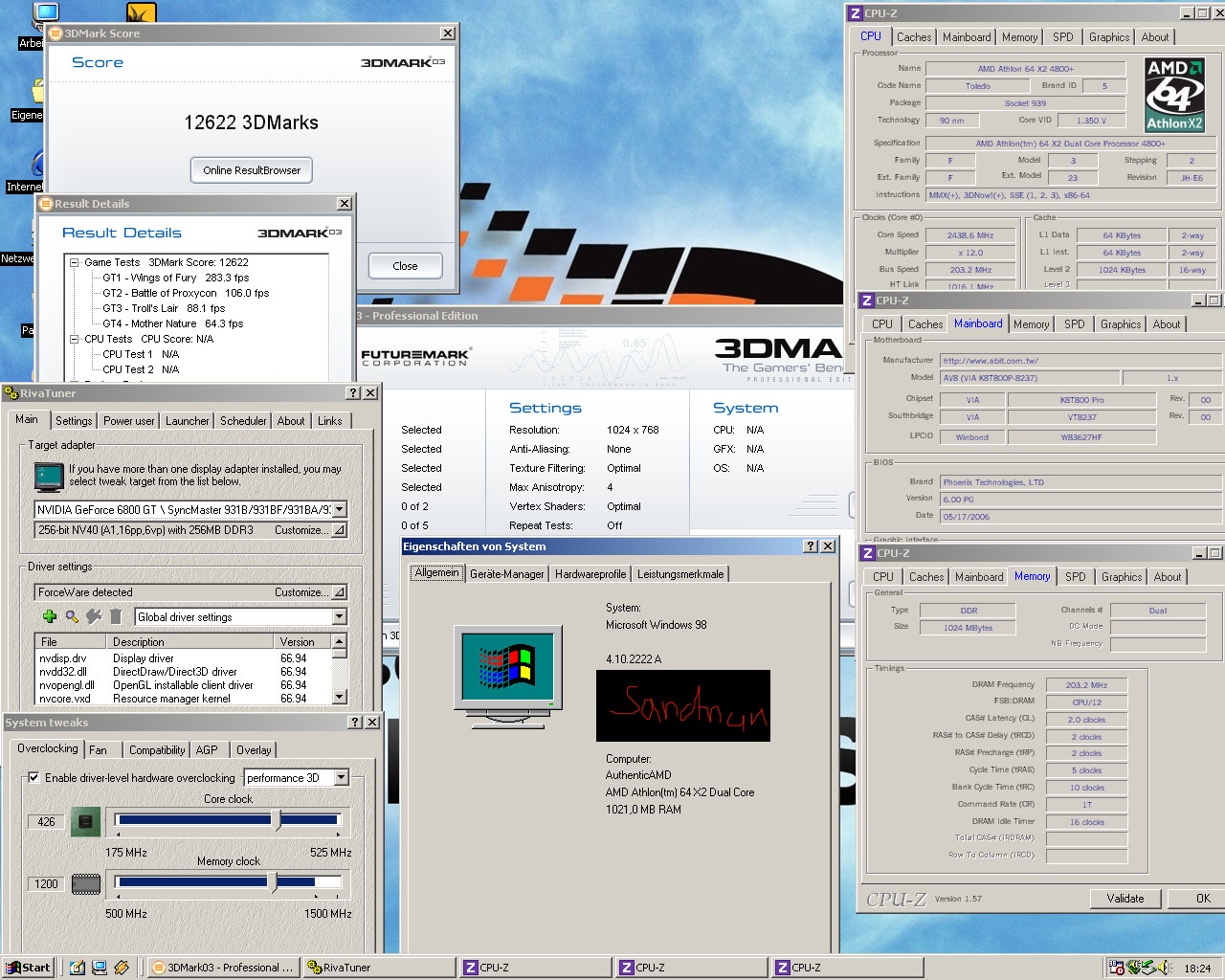 I suppose the problem here is I don't use Kernelex and the latest version nowdays are higher (v360 for 3dmark03 I think). I tried and still same errors.