The Secret of Monkey Island CD version - no audio

Hi All,
I’ve been wanting to play The Secret of Monkey Island, but my floppy disks are corrupt as mentioned on another thread:

I’ve been unable to source disk images, and I purchased the VGA version on CD as a result.

I cannot get any sound out of this game, I’ve tried the I, A, S, R attibutes for audio on two different PCs, both of which output sound on other games. The PC’s I’ve tried this on are:

Two things of note, when I use the S attribute, I hear a click from the speakers, as if the sound card initializes, but no music. When I use the R attribute, the MT-32 displays ‘Lucasarts’ but then nothing. I know the CD version has CD audio, but my understanding was you could still override this and play sound from hardware, rather than off the disk. Any ideas what’s going on?
Thanks,
J

The cd version you are using, is it "monkey island madness"? If so i will install and see if i can get fm or roland modes working with it on the awe64 (it emulates mt32 fairly ok in win98)

I had a similar issue which was solved by switching to DOS 6.22's MSCDEX plus VIDE-CDD (instead of the equivalent from FreeDOS).

Not my disk, but my disk looks like this: 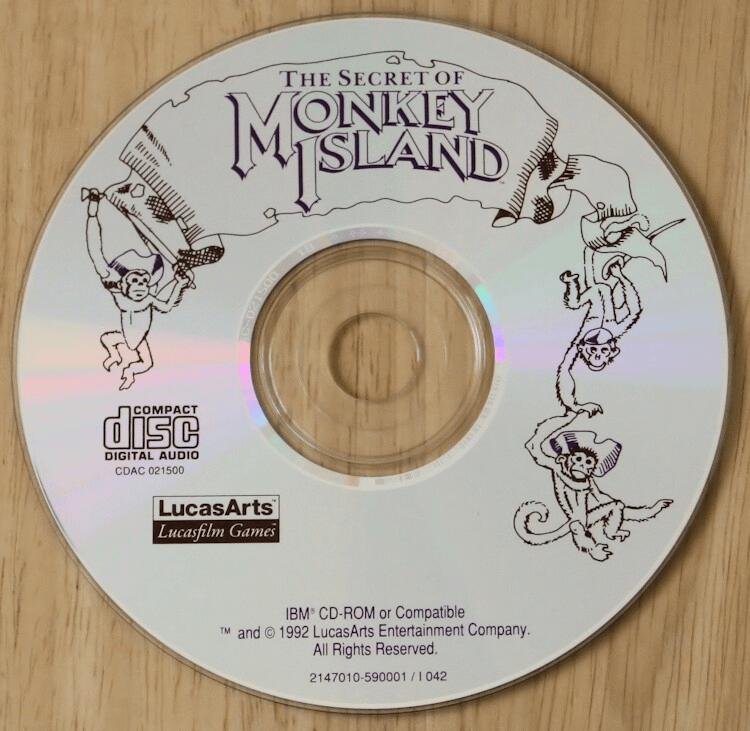 All the music in the CD-ROM release should be CD audio tracks. Just make sure you have the CD audio cable connecting your CD-ROM drive to your soundcard and that the CD volume is not muted in your soundcard's mixer settings.

This topic has already been discussed in this old thread. Seems like the CD version can't play anything other than the CD audio tracks for music.

However, the sound effects should still be using your soundcard or PC speaker, so try opening and closing the door to the SCUMM Bar and check if that produces any sound. If you hear any sound from that, this would prove that the game has detected your sound hardware correctly and simply refuses to play and OPL/MIDI music because it comes with CD audio tracks.

Thanks for the info, I just confirmed that putting this in a Win98 PC with CD audio cable connected, I am getting music.
What's odd is the parameters for sound cards are still listed, throwing me off.
Now if someone was feeling generous about disk images on my other thread, I'd be able to play the EGA version with MT-32 audio..... anyone???
Thanks,
James

TBH I have tried the MT-32 and in my subjective opinion sounds less good than the two alternatives (Adlib and CD audio) ; using a DreamBlaster X2 with BURAN 1.0. Not the DreamBlaster X2's fault however (it sounds great in many other games such as DOOM).