[Update: See attachments for the reference sheet I've put together, along with a compact set of working DOS utils. Still no MPU-401 success to date.]

I recently bought a Win95 system that had this card in it. It has an ES688F chip in it, but no other markings that identify it (that I can determine). Not even an FCC ID. I notice that it also contains the LS-212 and LS-215 chips that are said to be faked YMF262 (OPL3) and YAC512 chips. [edit: Need to correct my wording here. They're not so much 'fake' as unlicensed.]

In a fresh DOS 6.22 installation, I'm unable to get this card to perform anything but the most basic function. It works as an SB clone by doing the standard SET BLASTER entries in Autoexec. In an attempt to access the deeper ESSCONFIG options I have tried every driver & utility download that is said to support the ES688/F (from here on VOGONS as well as a bunch of other sources). None of them recognise the card.

The plan is to drive some Roland gear, but games aren't seeing the midi interface at all. SoftMPU outright says "No MPU-401 detected" (granted, the 688 is not on its supported hardware list). Of course I have spent much time experimenting with hardware addresses too.

All signs point to this card being a bit crap, and maybe it should go to the back of the shelf as an emergency Soundblaster. Just thought I'd post here to see if anyone else had ideas, before I go shopping for a new one? 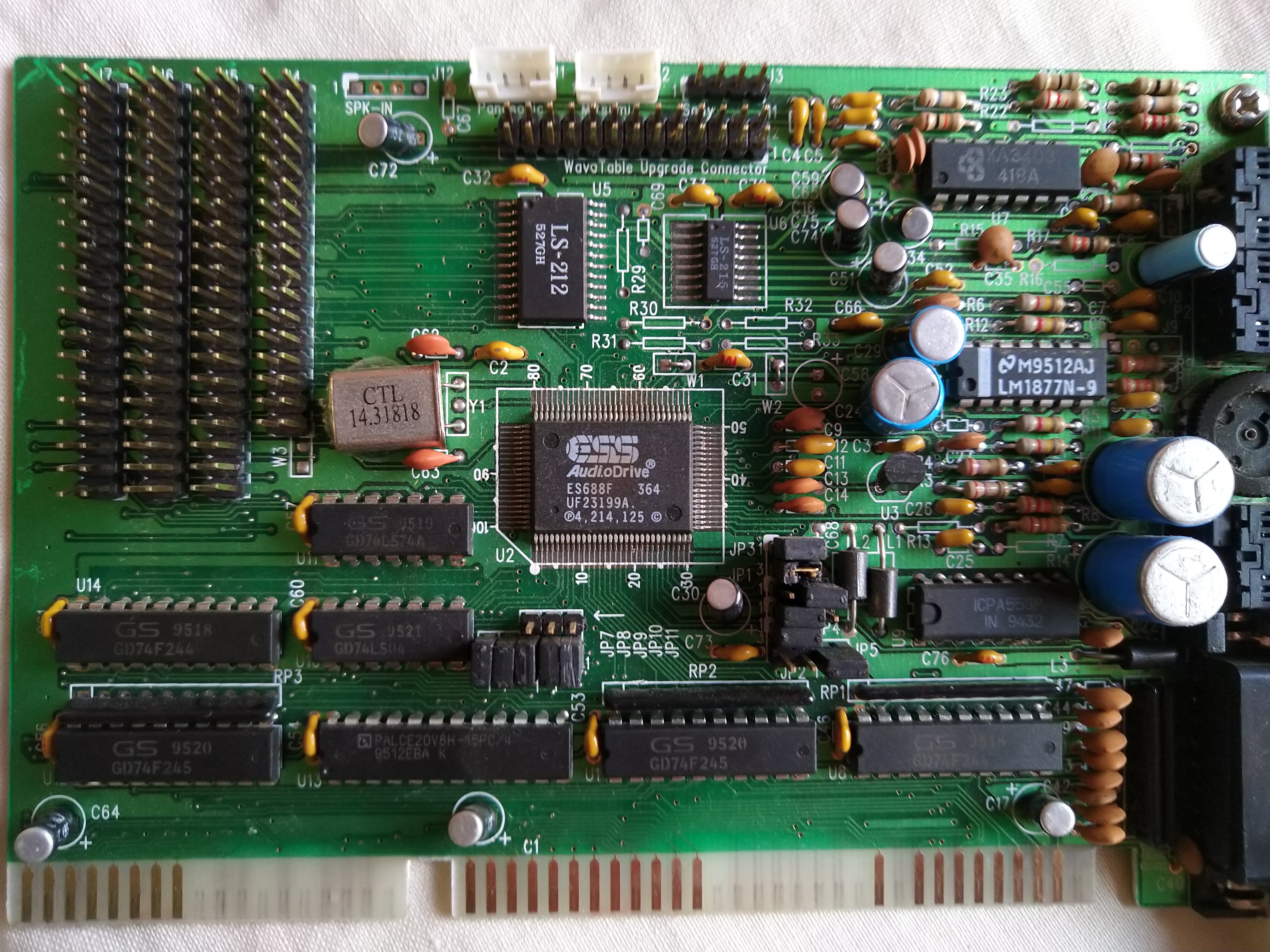 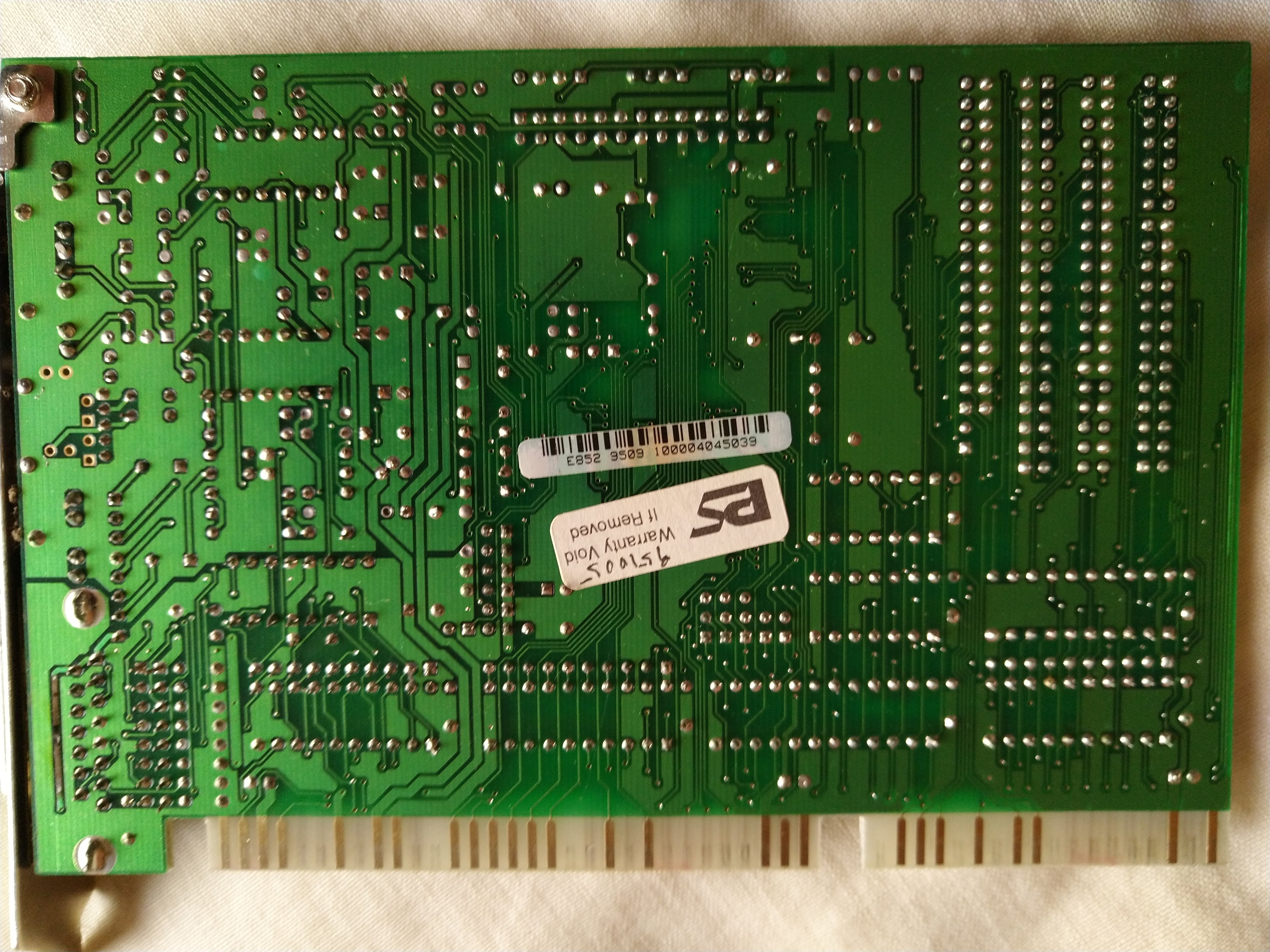 The 688 requires a TSR to be loaded for MPU-401 functionality.

Running ENMPU.exe (from this package) returns the following:

[edit] In hindsight, this is obviously because the driver is not installed, which takes me back to square one. Not to worry. SB16 replacement already on the way.

Are you sure ? As far as I understood the text, it talks about (once) illegal copies, not fakes perse.
Could well be possible the chips contain true YMF262 silicon, despite the fake part number. 😀

PS: Please have a look at The way to detect OPL3 clone . It's about testing OPL3 accuracy. 😀

Not sure I should have used the word 'faked.' Unlicensed probably a better term. Cheers for the additional reading.

Possibly a factor, but unfortunately I'd be flying blind there with no documentation. With a better card on the way, I won't invest the time into trial & error.

They are illegal copies but functionally are supposed to be 1:1 clones of the Yamaha chips.

As others have said, those chips are perfect OPL3 copies and sound identical to the real thing.

I have a Yamaha YMF724, which has a genuine OPL3, as well as a couple of cards with those perfect copy chips and I can't tell the difference between their FM synthesis.

As cyclone3d said it's probably the jumpers. If you don't have the manual that came with the card it's going to be a pain.

Your card does have a lot going for it if it works properly; "true" OPL3, SB Pro support, wavetable header and no hanging notes. If the output is clean I wouldn't ditch it.

Tbh I'd consider this one sweet little card:
- Near-perfect SBPro2 compatibility
- Real OPL3 sound from 1-on-1 clone
- No PnP mess, just good old jumpers
- If you can get the MIDI working, no irritating Creative bugs

There aren't that many jumpers there, so it should be possible to figure them out by trial&error if you can't find documentation.

Good input, thanks all 😀 I'm viewing the poor little guy less harshly now. I won't extract its potential without a model number or manual, but as a basic SB it does sound good.

Cheers. I had stumbled across that link. The jumper layout doesn't match of course, but it may still help as a reference. I have a Pentium II system packed away in bits; that'll make a good test chassis to play with this. Added to the queue of projects...

For some reason I can't view your linked images, if you can attach them I may be of help - I've had and used a lot of ES688 cards, they are some of my favorites.

Some progress with this card! I still haven't found any documentation, and there's still not an ESS utility in the 'verse that will talk to it. But I've got it set up on a test bench now, initialising it with SET BLASTER parameters only, and I've spent the afternoon experimenting with jumpers. I'll share what I've learned when I have that information better organised (it needs a diagram) but so far it includes address setting, gameport enable, and possibly IRQ or DMA.

I'm now having an issue I've never had before (on any card) which seems to be missing digital sound. Googling hasn't helped so I'm wondering if anyone has advice.

Prince of Persia is my go-to for testing a new card. Loading it up on this card the intro music sounds great, but in game the sound effects are different. It's mostly hard to explain, but one example is when you run into a wall, instead of a vocalised "oof" you just hear a synthesised "donk". And falling from height onto spikes is far less horrifying.

Is this something that could be resolved with jumpers? Or is it more likely that the ESS TSR would be required, like it is for the MPU-401?

The datasheet is available, so you can at the very least trace out the jumpers to the chip (via whatever bubble gum logic is in between) and determine what they do based on the pinout.

The datasheet is available, so you can at the very least trace out the jumpers to the chip (via whatever bubble gum logic is in between) and determine what they do based on the pinout.

Oh that's a great idea, cheers. I'd run across that sheet, but didn't think to use it that way.

In the meantime I've solved the PCM audio issue and have real sounds in Prince of Persia. I was playing with a pair of jumpers that I thought might have been IRQ or DMA. It turns out that with one of them on, I get the proper sounds. So this jumper might be a Soundblaster type option. Putting the other one on simply disables sounds all together (but FM music still works). I don't know why a sound card would have this function, but I have run across something that looks like this in the data for another card.

The behaviour of the above two jumpers is the same irrespective of my IRQ or DMA settings.

I have also found another thread about issues with this chipset (albeit in a laptop). A lot of signs point to it not being officially supported in DOS, but it looks like I can jumper my way to glory (sans MIDI).

That's cool! This card definitely is supported in DOS, just like any other Audiodrive card. Any luck using a mixer utility?

No luck with any ESS utility, but I wonder if I should something from Creative or something else.

No luck with any ESS utility, but I wonder if I should something from Creative or something else.

Tried Unisound on this and another card, knowing it was a long shot because they're not PnP. And no luck unfortunately.