I am happy to present you yet another thing that has been in the works for quite some time : the Orpheus II 😁 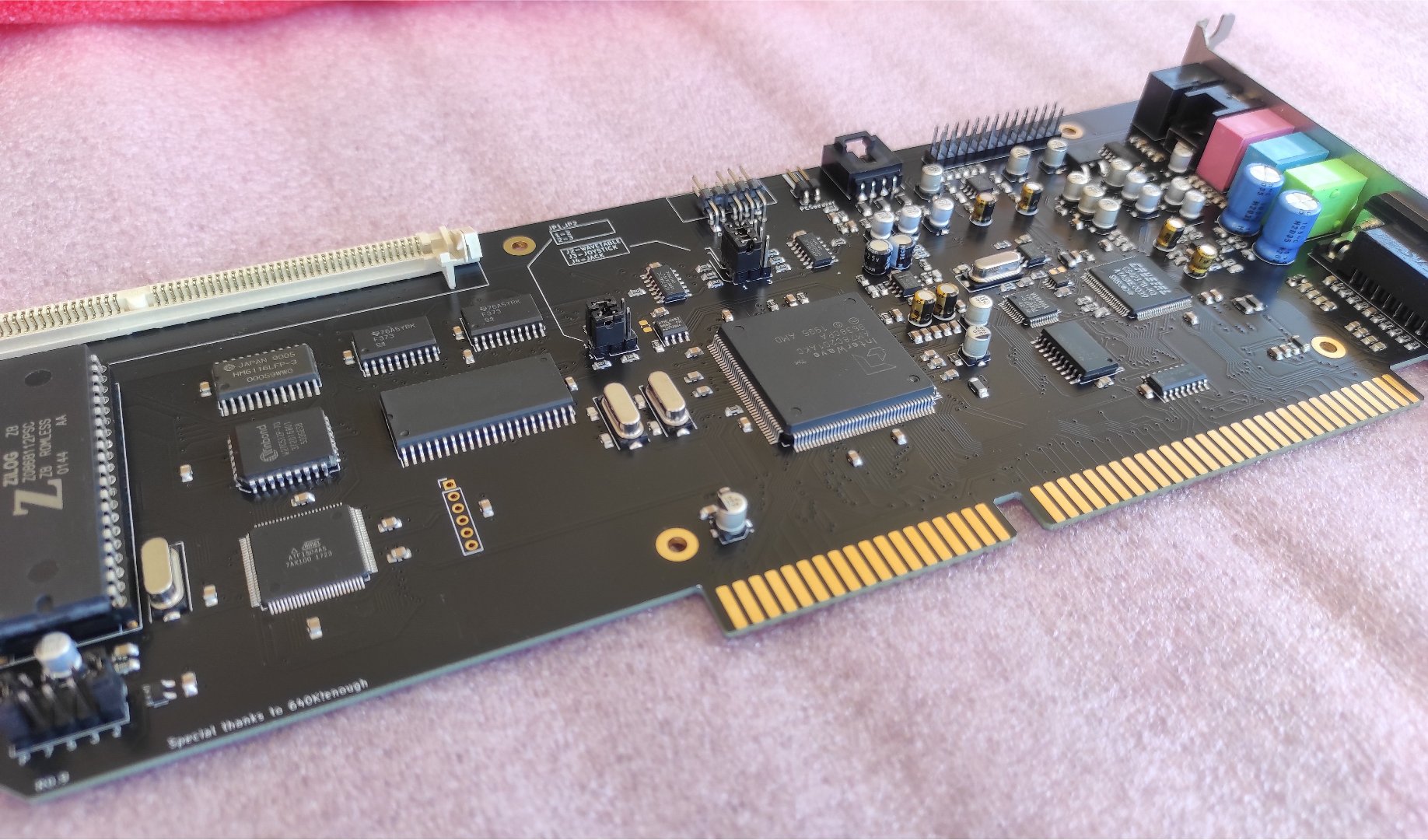 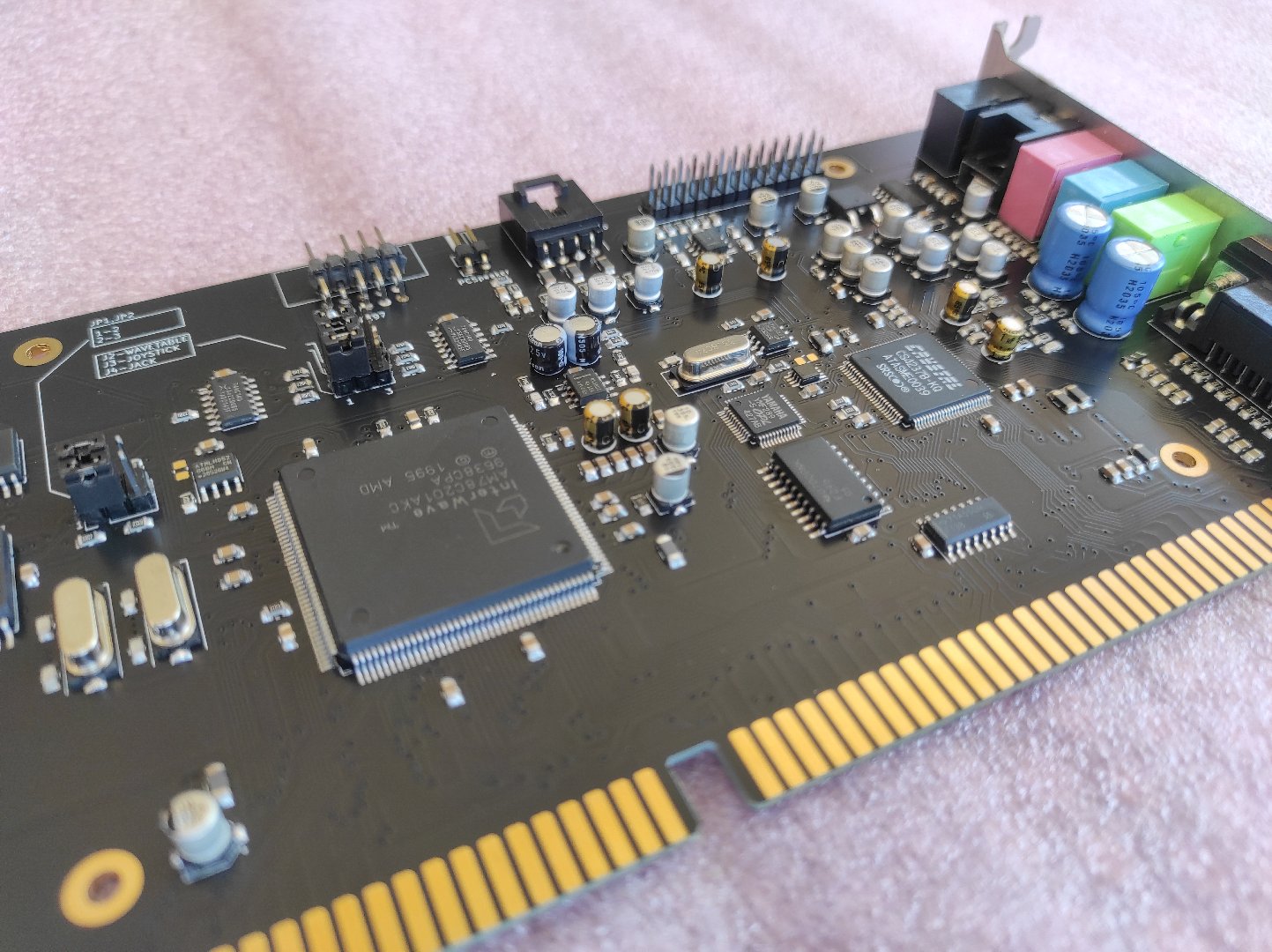 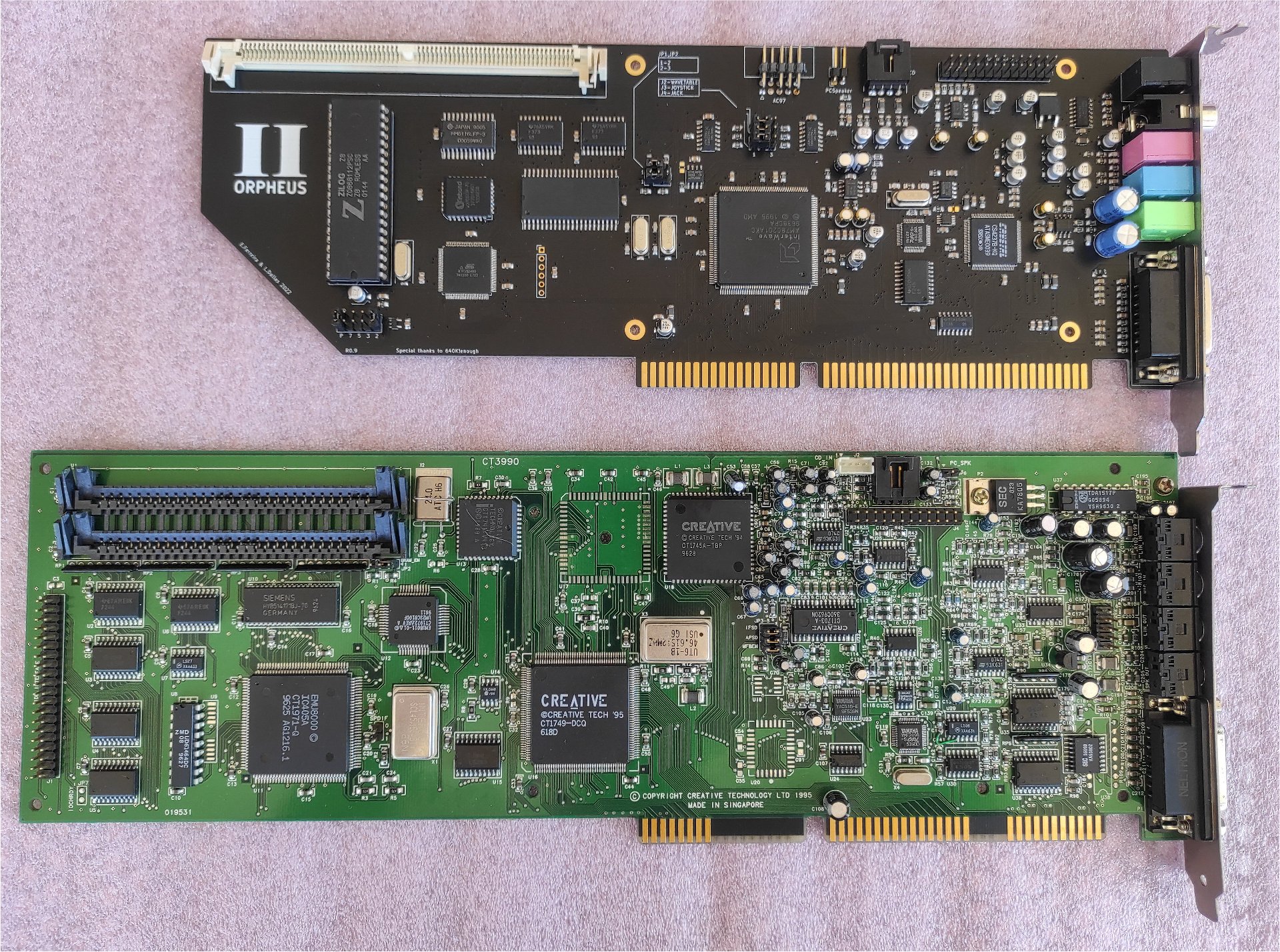 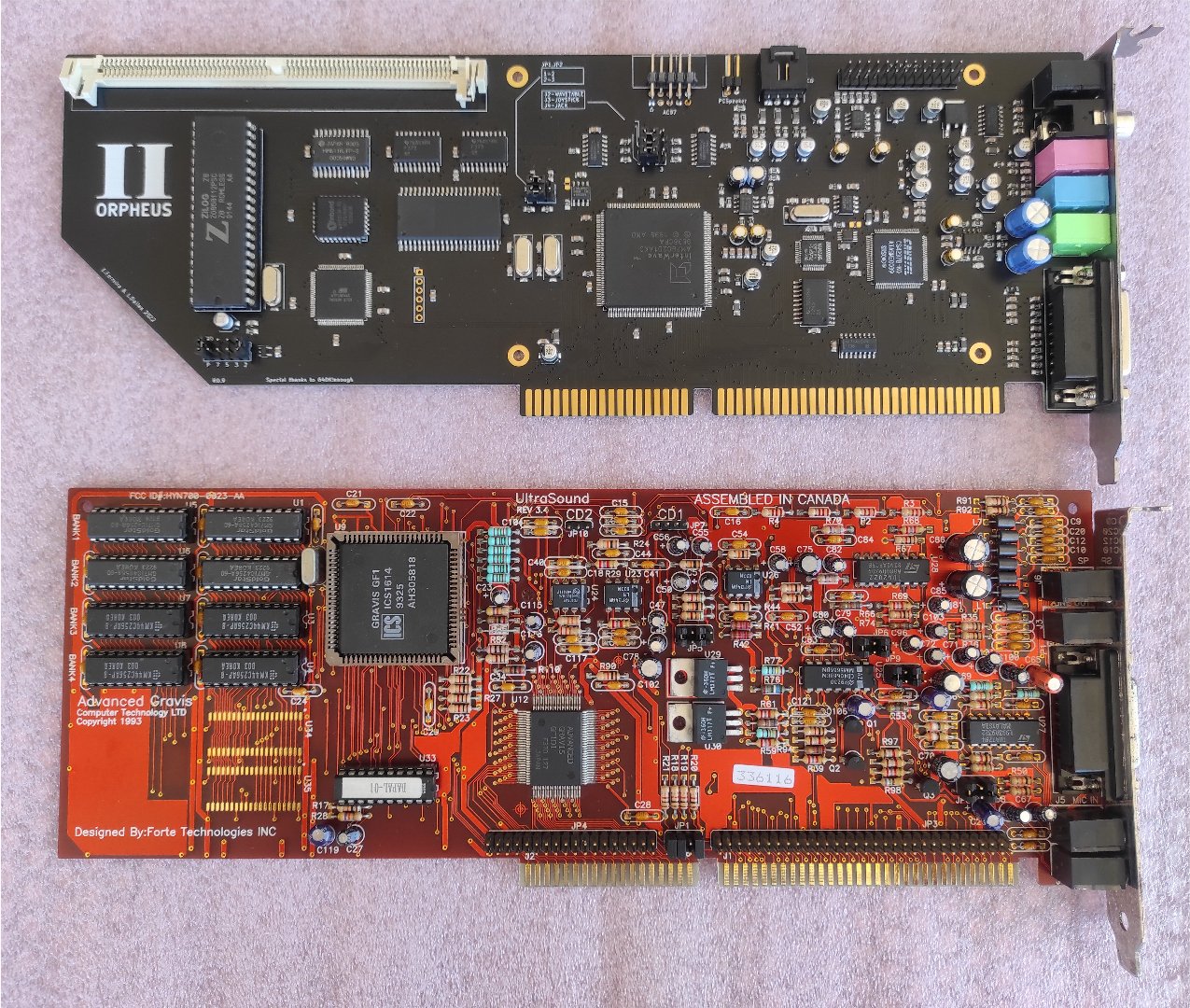 As it is apparent the main addition is the AMD Interwave chip (of the Gravis Ultrasound PnP fame).
The IW chip is only used as a playback device on the Oprheus II , audio I/O and non-GUS functions are all handled by the CS4237 audio controller.
There is space for full-length wavetable daughterboards like the XR385 and the low profile SIMM socket can accommodate a 16MB RAM stick without obstructing the next ISA slot - so the Interwave chip can be coupled with it's max ram configuration.

But the enhancements do not stop there!
Thanks to 640k!enough 's deeper understanding of the inner workings of the CS4237 audio controller we now have superior interfacing for the YMF289 OPL3 chip - and I dare say not even Crystal themselves would imagine this 😀
Because of these enhancements we can now have under Windows a selection between CrystalFM and OPL3FM devices while still maintaining the same digital connection to the CS4237 and everything else that was already possible with the Orpheus I. 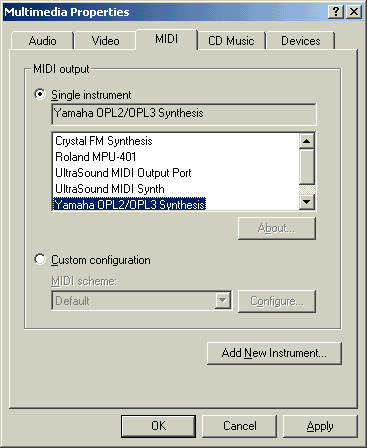 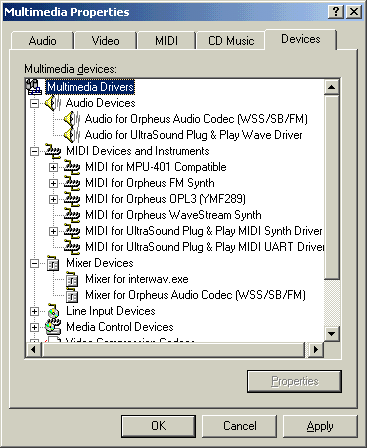 Under Windows the card works with the stock Crystal and Gravis drivers - no tricks needed to get things running: 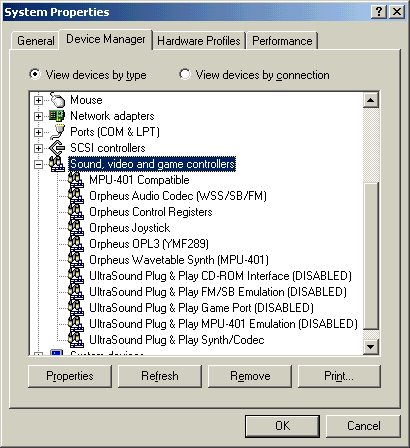 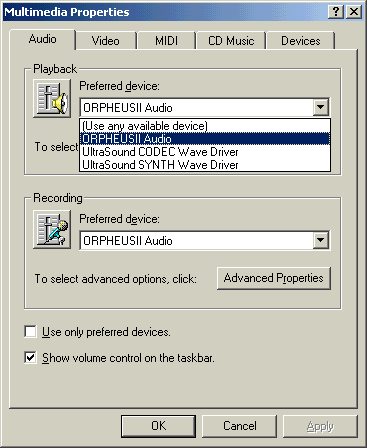 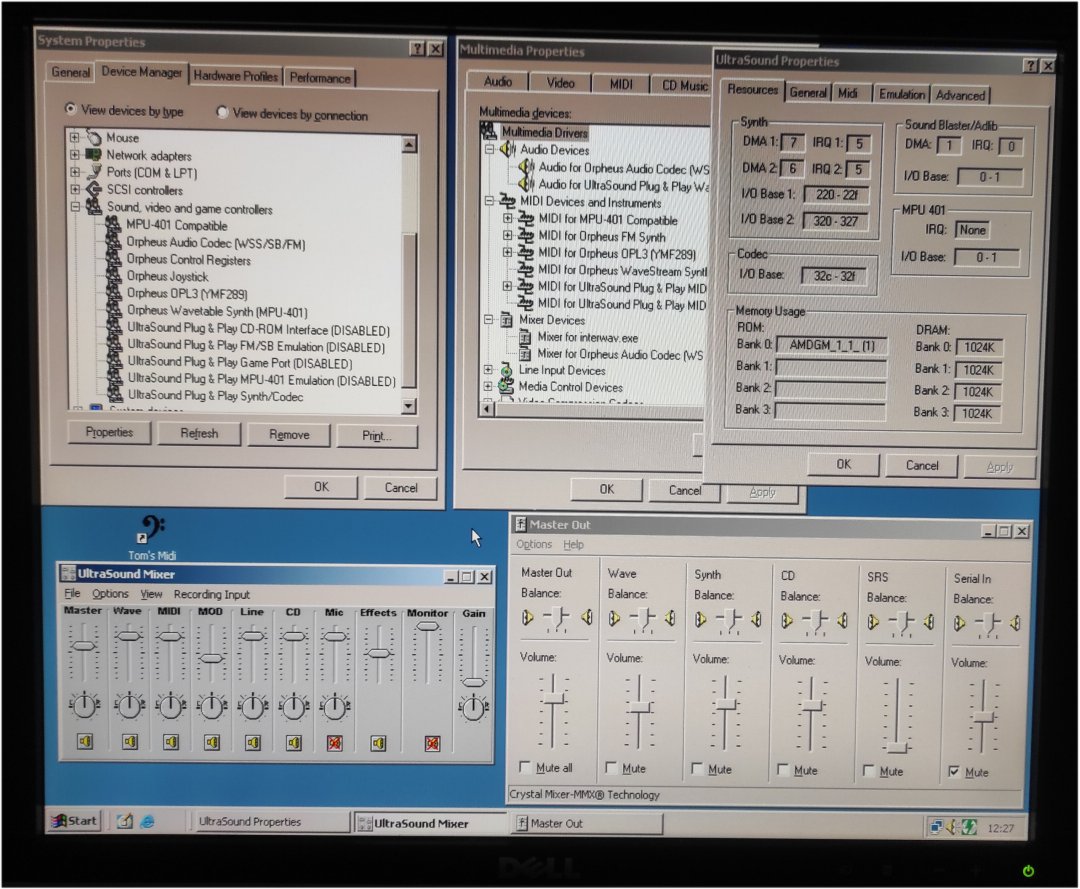 For DOS there is a new and enhanced ORPHINIT made for Orpheus II in development and for now the GUS part needs either the stock Gravis or Unisound driver to get initialized.

The whole card behaves like 3 cards on 1 pcb: Orpheus + PCMIDI + GUS PNP and as such it is resource heavy: 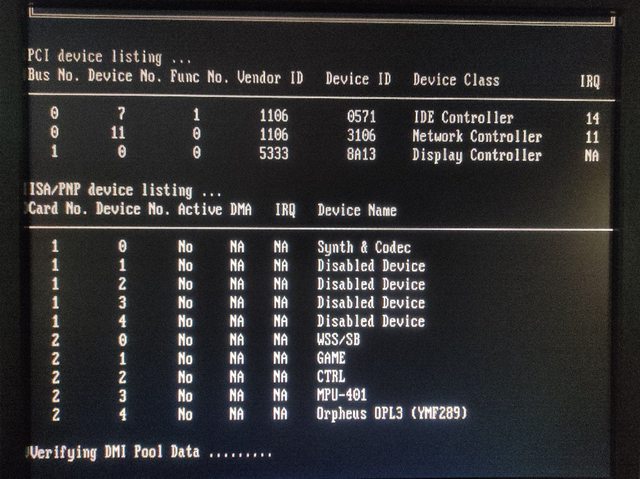 The card will require from the end user a certain degree of knowledge to get 3 cards going at the same time - as expected from such a setup.
Systems/motherboards that were previously problematic with Orpheus will not see an improvement - as the PnP functions and workings are internal to the CS4237 and no "fixes" can be made on them.
But everything else on the board is improved, from pcb design to components and functionality - all thanks to the experience gained from previous cards.

Currently the card is more or less done on the hardware side, this is the latest/final prototype card with no patch wires needed 🤣
Final card color will be "classic green" for that retro look.

I cannot think to add anything else atm, feel free to ask about things in the thread below since it is certain I have forgotten some important detail 🤣
Thanks for looking!

Truly a thing of beauty, cant wait to see the price tag !

This like the PnP version of the GUS Extreme... Oh man I wonder how it performs. It's beautiful... Is the original PnP ROM on there?

Edit: Does the GUS part have its own volume sliders btw? The GUS Extreme does this (Aux on the ESS) and it's very handy.
The Interwave does contain a Crystal codec by itself right? Doesn't that cause conflicts?

Wonderful! I book now for one (I guess it will be starting complete with intelligent MPU).

My birthday is in September, are you thinking of getting me a present? 😀 (i.e. being able to have both Orpheus II and PCMidi cards for MK8330)

I'm going crazy... Don't you guys ever take a break? In any case, it looks fantastic - RESPECT!

@TrashPanda
price will be announced when a batch of boards is made - you don't want to know how much some few protos cost to make ...
the market is very fluid atm and the good quality parts are super-expensive. I recently bought 0805 capacitors at 1.11eur/pcs from mouser...
things are crazy currently

@Rawit
Indeed cards will be sold with the original interwave mask rom
GUS is treated like a playback device and the it's volume is controlled by the "Wavetable / Synth" volume slider
There are no conflicts at all since one will be using the GUS part for the native GUS stuff. For SB/adlib things there is the Orpheus part so no need for sb emulation drivers.

@igna78
the search continues for pcmidi components - I cannot lie though: we have been keeping some tens of pcmidi parts to be used on Orpheus II so it can also exist in the wild...
but when another stock is found it will be used for the rest of the cards 😀

@igna78
the search continues for pcmidi components - I cannot lie though: we have been keeping some tens of pcmidi parts to be used on Orpheus II so it can also exist in the wild...
but when another stock is found it will be used for the rest of the cards 😀

I knew "my PCMidi daughter card for MK8330" was being held against its will by you and your partner Marmes! 😤

Thanks guys for the amazing work you do 😉

you guys are crazy 😁

though I prefer shorter cards for practicality.

i'll be damned. you guys are good. count me for one..again...

Did you guys try the card with Windows 3.11? Can I get on a list/pre-order?

Uffff looks amazing. One question, can all the audio be outputted through SPDIF or are there any limitations? Also, would it not be also possible to have the SPDIF signal on internal header pin's?

Wow, what the heck?! That looks amazing! Hats off to you and everyone else involved in the creation of the Orpheus II (and the original Orpheus)! Would love to grab one for myself.

This is amazing and I love it, way to go on this effort, guys!

When I saw the length of the card and the SIMM slot location, my first thought was that it was an AWE clone... then my eyes moved down and saw the Interwave. Amazing work! How constrained is the supply for Interwave chips? I imagine between this project and the Argus, the remaining stock left in this world will dry up eventually.

When I saw the length of the card and the SIMM slot location, my first thought was that it was an AWE clone... then my eyes moved down and saw the Interwave. Amazing work! How constrained is the supply for Interwave chips? I imagine between this project and the Argus, the remaining stock left in this world will dry up eventually.

We have stock enough for a few cards 😉 This is work in Progress. Soon there will be more news.

This is insanely great!!!

@Rawit
no real 3.1x testing yet because it is very limiting when it comes to drivers... if I am not mistaken the last installed driver will overwrite the previous one and be used for output... is there a reason to have IW driver installed under win3.1x when the CS4237 one offers more compatibility?

@Bancho
just like Orpheus I everything gets outputted from the S/PDIF port, no limitations on this

@polpo
we do have a nice stock of chips for a couple of batches... what will happen when these are gone I have no idea
it is already hard enough to get good old chips and now it also became way more expensive... one only has to look at a single YMF289 price on ebay for example to get an idea...

The IW driver would give you access to the GUS Synth, dynamic patch loading and enables the usage of larger banks. With the GUS Extreme both the GF1 and ESS drivers are installed under Window 3.11 and you can select which one to use for output. This setup would be great for Orpheus II, but I wonder if it's that easy with the CS4237 and the CS4231 in the IW.

The Interwave does contain a Crystal codec by itself right? Doesn't that cause conflicts?

It does (the InterWave's CODEC is a superset of the CS4231), but there are absolutely no conflicts. They use completely separate I/O port ranges, so as long as resources are available for each, both can work without problems. There is some chance that badly-programmed MS-DOS-based software titles will have detection routines that are "confused" by the existence of the two, but no such titles have been found yet.

How constrained is the supply for Interwave chips?

The last time I checked, the 'AKC InterWave chips were getting more rare by the day, but there seemed to be a relatively healthy supply of the 'KC revision. The instrument bank ROM, on the other hand, seems to be far less plentiful. Once their current stock is gone, it isn't clear what will happen, but there are always options (and I divulge nothing!).