If I read that correctly the Magewell card has its strength with digital signals (starting from 480p modes?) and offers fast mode changes. On the other hand I would expect a fast reaction on mode changes if the input signal is already a digital one. But for analog VGA you still rely with that card on a converter like the Extron RGB2HDMI, which is from its specs also limited to 480p and higher resolutions.

What is your solution to capture e.g. 15 kHz analog modes (like RGB from Amiga) with the Magewell card? The Epiphan card can do that directly. I don't know about the Micomsoft.

Would you limit your recommendation for the Magewell card to 480p resolutions and higher, preferredly from a digital source?

I use an OSSC as I mentioned, and the card takes 640x400 and 720x400 if I put the OSSC on passthrough with no issues that I can see. I haven't tested with an Amiga specifically, but in my setup I have a bunch of consoles connected through component cables and 240p resolution requires some tinkering (the image will look very distorted unless you enforce a 4:3 aspect ratio), but I usually just run the OSSC in 3x or 5x mode for this res.

I don't have an Amiga, but can test with Minimig this afternoon to see what happens if I capture the analog output from my MiSTer and just set the OSSC to passthrough.

Alright, so I did a couple of tests. First, I just boot up Windows setting up 400p in passthrough mode. In the OSSC I have two profiles, one for 720x400 and one for 640x400, but in this video I chose the later. It works with both, but I didn't want to change it during the video and with 640x400 you get the full screen throughout the boot sequence. Also, I change resolutions inside Windows to show how much it takes to re-sync.

Second, I played a bit of a pinball game on Minimig. I was playing in the preview window and didn't know the buttons on the gamepad (I didn't want to take the keyboard out). In any case, the game is Slam Tilt, that allows you to change resolution during gameplay (it takes me a while to find the button) and uses that during multiball, unless disabled in the options.

In both cases, I have the capture card set up to "fill the screen", and I am forcing a 4:3 aspect ratio in OBS. You can see the actual resolution the OSSC is sending to the capture card in the OSD.

I'll add, the delay when changing resolutions comes from the OSSC. I've also used a Retrotink2x (and sometimes still do when playing PS2 interlaced games) and that one switches between 240p and 480i in what feels like a single frame.

Have you ever tried what your setup delivers with real custom VGA modes?

Copper from Surprise Productions is specifically difficult as it uses horizontal sync shifts per scanline. The DVI2PCIe removed this effect internally, while the TFT capture shows it a bit (the TFT switches off with high amplitudes).
https://www.youtube.com/watch?v=4KeMtiYi808

Technically, I could do pixel perfect if I didn't force the scaling in the capture card. I enforce it because I do prefer the 4:3 look, since I feel that's how graphics are meant to be displayed. It's also one of the reasons I prefer to use line doubling before capture and use a 1440p canvas. I can test the demos to see how they look. Do you prefer me to record them in pixel perfect or it doesn't matter? Also, while the OSSC will pass the 70hz signal, I have OBS setup for 60fps (for Youtube), so at some point there must be dropped frames. The capture card does take 70hz, however.

Edit: Anyway, I've tested three of the demos and the results are not great, certainly.

Kukoo2's colors are fucked up, I don't think the OSSC can be tweaked for this:
https://www.youtube.com/watch?v=-RA9JsBRiTE

I think Ambiance worked fine? Other than the fact that I don't have scanlines enabled in the OSSC because they break with Youtube's compression
https://www.youtube.com/watch?v=e02-8DaX0ls

Copper was a mess. The OSSC kept losing sync every time there was a screen wobble effect, and some of the effects simply didn't display at all. Also, music didn't work for me here, so the video is a bit more boring.
https://www.youtube.com/watch?v=pyswTd6CB0o

I leave the OSD on since I use it to make sure the phase is well adjusted. Otherwise instead of blue it will look red. It's the first thing I checked on Kukoo2.

As I understand, a big chunk of these issues come from the OSSC itself rather than the capture card, as obviously, if it cannot sync to the VGA signal it doesn't send anything at all to the capture card. Certainly, not a good way of capturing demos. Still, for game capture, for example, I'm pretty sure there will be only a small handful of games that will be problematic. As long as the OSSC can take them, the Magewell will take them after the digital conversion. Now, if only there was some sort of FPGA designed specifically for VGA...

In Kukoo2 also at the bottom about 1.8 of the chessboard tiles from the perspective scroller are not visible.

In Ambience OSSC seems show the fields as progressive and switches every half second between the odd and even field. You never see the complete screen.

Regarding game capture I agree completely. Also for demo capture the examples given are already special. Most demos use, regarding the analog output, standard modes. The problems there are more in the area of CPU speed/suitable sound cards/ VESA modes.

I guess this has been asked earlier but so much of the conversation is outdated I suppose it may as well be asked again..

Is there a cheap but at least fair quality option to record PAL output A500/DOS video signal from Composite, RGB/Scart and S-Video sources?

Quoting myself to repeat the above question now that this thread seems to have picked some traffic once again.. Any suggestions?

The Retrotink2x does composite and S-Video, but not RGB (although it does YPbPr, so maybe you can do RGB->Component somewhere). It outputs 480p through HDMI that you can capture with any cheap capture card. I wouldn't go any lower than that, since the output quality of the Retrotink2x is already on the verge of what I would consider the bare minimum. It's super fast, but the image is somewhat soft, even with the filtering off.

Other than that, you have the OSSC, and, of course, the Chinese knockoffs of both of these things that I can't recommend on a moral basis, but they do exist. Also, I wouldn't be surprised if at some point there's something similar to the RAD2x cables coming out for Amiga.

FWIW, the generic cheapo Composite to HDMI adaptor you can find on Amazon for <$20 is actually decent considering the price point.

I used one for a while before I got my OSSC for capping Amiga, here's an Amazon link.

Demo of the output: https://clips.twitch.tv/ElegantAmazonianGiraffePlanking

For $15 I can't really fault it. It's a bit soft (which is partially due to my Twitch bitrate back then being on the low side), but there's no dot-crawl. 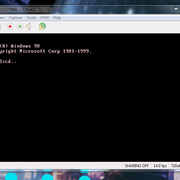 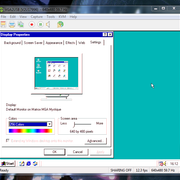 Edit : I was aware of the USB fact, it was only in case of a known problem (I've RTFM before asking 😉).

The fps shown in the Epiphan tool itself is not so reliable to judge actual fps achieved in capturing.
How much fps do you get e.g. in VirtualDub and does it increase if you choose YUV instead of RGB888 ?

Here's a link to an archive containing two videos, one for each of the parameters (YUVY and RGB565), set in VirtualDub. I hope it correspond to what you've asked, elianda (I'm not familiar at all with VirtualDub).

Hmm this does not help so much as for the videos the capture fps was set to 30fps.
Just enable the preview and read the effective incoming fps. I made a sketch: 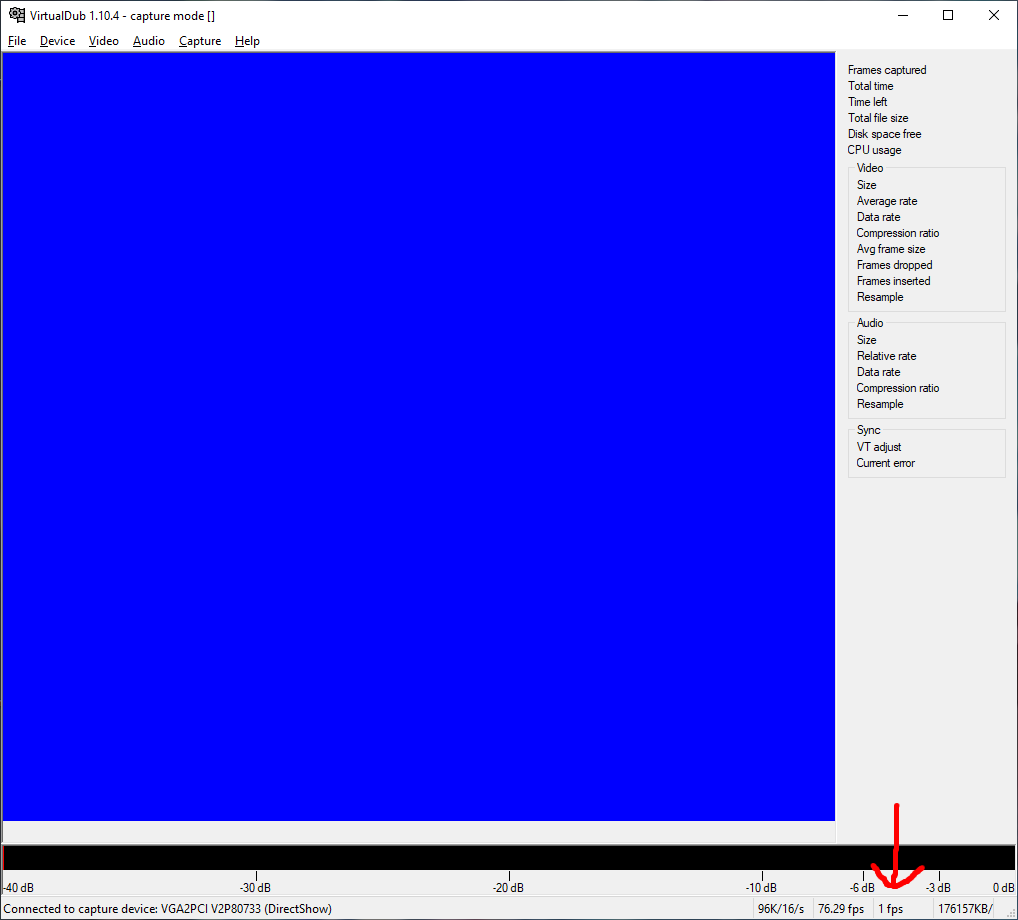 In my picture it shows 0 - 1 fps as there is no source connected. If a source is connected it shows the effective fps.

From your videos it looks like you have interlaced enabled?!?

VirtualDub don't seems so accurate : if you check the video in the link, I've opened it first (30fps), then the Epiphan software. It seems legit that the USB interface is not enough to feed two softs, and the Epiphan software show it in its framerate (and visually, in both of the acquisition software), but ... still 30fps for VirtualDub 😀

About the interlacing, it seems to be on, but I don't know how to disable it (or to "de-interlace" it) 🙁

If I read the product specs of the lowcost VGA2USB correctly ( https://www.epiphan.com/wp-content/uploads/20 … sb-brochure.pdf ) then it always captures interlaced.
And the 14 fps interlaced at 640x480 you see correspond to 28 fps progressive as written in the spec. (deinterlacer retro scandoubler)

So it does not seem anything wrong.

It make sense, you're right 🙁 seems that this version of VGA2USB is only crap if you want to capture anything else than a slideshow ... Anyway, vielen Dank für Ihre Hilfe !