The last time I checked StarTech sold a new revision which doesn't support as many resolutions as the old model / the one I reviewed.

VGA text mode is actually 720x400@70Hz, as is Mode 13h (320x200x256 colors but scan doubled). The problem is usually the refresh rate, not the resolution. Remember that original VGA monitors were fixed horizontal frequency (31.5khz). This can be attributed to laziness and poor programming. The makers of the product assume everyone is using a EDID compatible monitor in Windows that will broadcast its supported resolutions and/or restrict itself to 60Hz VESA modes.

Obviously Monday I'm returning this converter to the store as well, I must find a scaler which supports lower resolutions than 640 x 480 with 60 and 70Hz like the Atlona HD500 (for which I can't seem to find any seller that ships to Italy).

Even better if it also has Component, since I need both component and VGA... I checked the official AVerMedia ET110 converter and it also supports only from 640 x 480 up to 1080p...

Still weird why fullscreen games would alter the frequency or stream to graphics card at weird resolutions (WTF was 640 x 1920 ???)

They both work fine in DOS and when running from Windows.

The boxes both handle on the fly resolution switching which is nice. When the resolution changes, it just shows color bars for about 1 second until it detects the new resolution.

The only problem that I am having is that I am not getting the full vertical picture showing up in Recentral.

It acts like the HDMI out is putting out an overscanned signal. I can adjust the position up/down but can't get it to resize.

The horizontal is a bit too wide as well, but that can be adjusted on the scaler box itself.

I am using the latest version of Recentral available for my card and there is no adjustment for over/underscan. Maybe a limitation of my card?

Edit: After doing a bit of research, it sounds like the overscan problem is on the capture card side... specifically a problem with the drivers that Avermedia apparently has not bothered to fix since 2012, not only on the C127, but on at least the newer C985 as well.

I didn't see any settings in the registry, but maybe I am just not looking in the right place or the entry to disable overscan is not there by default

Edit 2:
Since my capture card has a VGA input, which doesn't do the stupid crap of overscanning... only HDMI does this on pretty much every single device ever made that has HDMI input as well as an HDMI splitter for when I am using higher resolutions which don't seem to have the issue with the capture card.

My AVerMedia HD DVR (C027) doesn't do any over scanning from the HDMI input, at least with DirectShow capture programs. The EDID information the card transmits to connected output devices doesn't force overscanning either (I looped back the 2nd DVI output from my desktop into the card and it displayed the extended desktop 1:1)

My AVerMedia HD DVR (C027) doesn't do any over scanning from the HDMI input, at least with DirectShow capture programs. The EDID information the card transmits to connected output devices doesn't force overscanning either (I looped back the 2nd DVI output from my desktop into the card and it displayed the extended desktop 1:1)

I think is it an issue with newer drivers. I wish I could find the drivers that came on the original CD. I don't have it since I bought the card used.

The only real reference I could find to the overscanning issue was that somebody mentioned that the new drivers were crap because of it and that they were going to go back to the previous drivers which didn't have the problem.

I wish I could find the original drivers or ones older than the 1.50 set to see if that is the case.

Edit: did some more testing and it appears that the Atlona boxes are what is overscanning the 640x350 resolution. This was with an HDMI to vga converter as well as going direct to an HDMI input on a monitor and it was showing the same exact thing as it did in Recentral.

They apparently don't scale the weird resolutions properly and don't offer enough adjustment to take care of it. Bleh.

I could somewhat record a PC with a DVI-HDMI adapter in the graphics card DVI port, but it glitches the hell outta the whole boot sequence until it doesn't get on Windows 98.
Pointless to say it's useless for DOS recordings.

Using the DVI to HDMI adapter, the capture card glitches like this for the whole POST and BOOT process until Windows 98 reaches the desktop and starts showing up perfectly: 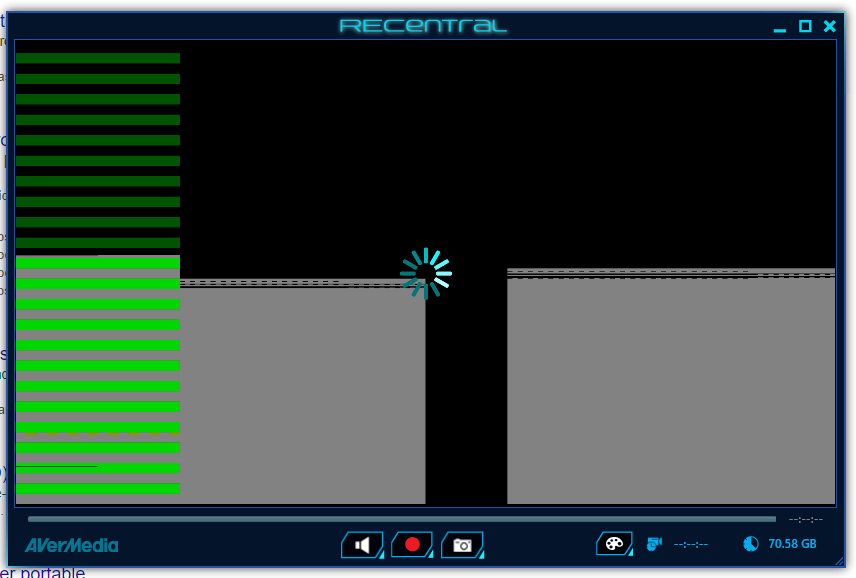 I think I'll stick with my old method (TeleViewer v2 + Hauppauge HD PVR) for a little longer... at least for DOS