OK, it doesn't work (the FX5500 PCI). Philscomputerlab has it working on the same board. Maybe it's because he is using REV 5 and I'm using 4.1

The problem is only with OpenGL. It works with DirectX all the way up to 9.0. The desktop goes all the way up to 1920x1200 at 32-bit color and seems accelerated.
Whenever I launch an OpenGL program, I get the message "The exception privileged instruction...."

I have tried a few versions of the ALi and ULi AGP driver and also tried installing the PCI PCI bridge driver (which is the correct one for PCI card I think).

I'm getting very tired of this board. Maybe I should just sell it and do another PIII build. Maybe PII would have better support.

I'm pretty surprised that it's not working with this card. Is there something else I should try to get OpenGL to work?

OK, I tried that with driver 56.72 because it is the last one I installed and it's very close.

I underclocked the CPU to 300 MHz and put the voltage down from 2.7 to 2.4. It still has the same problem. It crashes instantly on any OpenGL program with the error I stated. Even screen savers don't work.
Just so you know, the FSB was not overclocked. It was set at 100MHz and still is. If the FSB is not overclocked, then it doesn't make sense why the overclocked CPU would stop working by changing the graphics card. It's also not random errors.

I also installed the right directX as per this site: http://www.amd-k6.com/os-support/
I tried doing exactly what he did and still doesn't work!
One thing I'm not sure of is that windows 2k update pack. I installed a ton of update packs, but I don't know if this was one of them.

Right now I'm thinking about what might happen if I try to uninstall as many drivers as possible and then just instert the windows 2k installation into a Pnetium III board.

Yeah, that makes sense considering it says "privileged instruction" which might mean some instruction that is not implemented in the CPU.

But, I don't know about "OpenGL drivers". I never install them, so are they included by the OS or by the Nvidia driver? Can it be updated or actually down-dated?

Give XP a try it could be a driver combo problem.

I second this. I ran into this as a problem with my Thunderbird machine and an AGP Geforce 6200. Thunderbird Athlons don't support SSE instructions. Switched to Morgan core Duron (which, oddly, does have SSE support) and the problem went away.

I don't think SSE is the problem here. Some other instruction perhaps (K6 isn't 686 class CPU). I had working OGL on K7 Athlon and FX 5900, using 70 series drivers (not sure which one).

Give XP a try it could be a driver combo problem.

This is starting to sound like a very odd system.

A K6-2 gaming in Windows XP or even 2000 seems like an experiment to find the absolute limits of what is functional on socket 7, rather than a usable gaming system.

Unless there's a specific reason for using a K6-2 for newer games, GPUs and OSes I would really think about changing either the focus or the CPU/motherboard in this system.

Oh I know it's odd. I really don't like Windows 9x. I'd rather just use DOS, 3.1, or windows 2K.
I also don't game too much. Most of this stuff is done just for the fun of the weird hardware. I mostly program.

When I started this system I wanted something that was right in between the DOS and PIII Windows XP era stuff. I thought this mobo would be a good balance for under clocking and using with DOS and then overclocking and using with windows 2k. The incompatibility issues are a bit surprising because I've done a lot with PIII systems running GFX cards that were WAY beyond the era of the mobo and they usually worked fine. This ss7 stuff is a lot more finicky.

The last card that looks good to me is the Geforce 4 MX 440. It's super cheap on ebay and there are tons of them available. All the good voodoos are too expensive imo. I would think it should work. It was also mentioned by an earlier post.

I'm also debating about the Matrox G400 because it's also relatively cheap and available.

If you had to choose between these two, which would you go with?
For compatibility?
For speed?

The MX440 will be more bottlenecked, but should still perform much better than the G400. Also, the MX440 supports many newer features, such as hardware video decoding, T&L etc. Will it work in your SS7 motherboard though? That might be a different thing altogether. The G400 will, unless there is something especially odd about your specific board.

That makes the GF2 MX400 the obvious choice.. pretty much the same performance but many more drivers to choose from. Shame the voodoo 3 3000 isn't on the list

That makes the GF2 MX400 the obvious choice.. pretty much the same performance but many more drivers to choose from. Shame the voodoo 3 3000 isn't on the list

Yeah 3DMark and Quake games are going to favor a Geforce over a Voodoo3. With the possible exception of Quake 2 equipped with the AMD developed Voodoo2 3DNow patch. But the Glide option with the Voodoo3 is very valuable for many old games.

Though with a Geforce, one could experiment with the excellent UTGLR for Unreal, Deus Ex, UT, and Rune. I've used it with a Geforce 256 on Win9x (UTGLR v3.4). I have not tried it with a K6 however. It appears to be most optimized for SSE 1/2.

going to favor a Geforce over a Voodoo3

From my experience it's completely opposite. Voodoo 3 3000 is noticeably faster both in D3D and OpenGL. ATi and Matrox performance is just pure garbage though.

going to favor a Geforce over a Voodoo3

From my experience it's completely opposite. Voodoo 3 3000 is noticeably faster both in D3D and OpenGL. ATi and Matrox performance is just pure garbage though.

For 3DMark 2000, I'm referring to the questionably big score boost from T&L support. 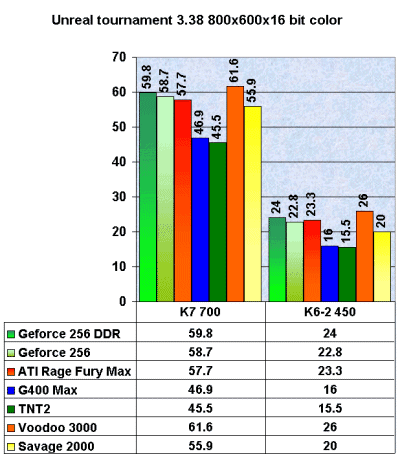 (Somebody give this game a Core 2)

Is there a website that people here tend to sell their stuff on other than ebay?

I decided I am going to sell this system. Without OGL it's pretty much useless to me. I could get a much older card, but the geforce4 is not even working, so I don't know what the problem is. I've tried 6 different cards now. All with similar problems. Maybe it would work with Windows 98. I didn't try that. Everything else works fine though. All versions of DirectX and full HD resolutions.

This is the fourth board that I've been having problems with. And, yes, I have tried era correct cards on all the mobos I got.
Each board had a different problem. I really don't want to give up on this, but it's becoming much more of a chore than it is fun.
Anyway, I am not one to give up, so I am not going to sell the board. This is the most "working" board so far.

I've been reading at amd-k6.com and it seems strange that the guy there is using Windows 2000 with a newer graphics card and doesn't have the problems I'm having.

Here is an excerpt from his site:

Seeing as my error is "privileged instruction", it's making me think that my CPU is lacking some instruction.
Does the K6-2+ or K6-III have any newer instructions than the K6-2?
I know about the difference in on-chip cache, but what about instructions?

To be fair as far as retro experiences go you succeeded reliving most of socket 7 owners struggle from 1998-2000. SS7 wasnt exactly a premium platform, nobody was consciously choosing K6 over Intel on merit. Broken AGP support, calling something 'stable' when it merely didnt crash a lot, juggling drivers/support packs, reinstalling OSes, thats all part of the true experience.