I've recently got myself a '95 workstation OpenGL acceleration card that's using an Evans & Sutherland Freedom chip. It came with the drivers for WinNT 3.51, but I'm trying to find drivers for WinNT 4 or Win9x if they exist at all. So far I've tried Archive.org and Google Groups, but came up with nothing. Archive.org only has copies of es.com site from 1998, where Freedom is not even mentioned.

I've tried installing the WinNT 3.51 drivers under WinNT 4.0 Workstation, but it said that the drivers are incompatible. 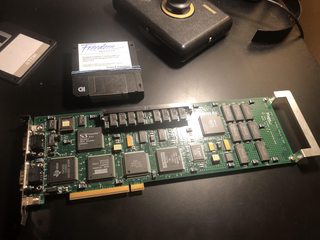 Does anybody have any relevant files or info on this card?

Worst case, could always contact Evans & Sutherland, or submit a support ticket on their website. Worst they can say is "Sorry we don't support that card anymore" and you'd be stuck with NT3.51.
https://support.es.com/Default.aspx
https://www.es.com/contact/
Might have to fudge some contact details on their ticket form. I wonder if they'd accept "Personal Use" as planetarium name.

Well, you definitely have a point 😀 Sent them a ticket.

Would have emailed John Carmack — he seemed to have had an Evans & Sutherland card in his Dolch PAC machine in 1998, and logically it should have been a Freedom, but others have already tried, and he doesn't even remember the model of the card.

Newly registered user on VOGONS, but have visited this site hundreds of times in the past. Stumbled upon this interesting post through a recent Google search.

I've tried installing the WinNT 3.51 drivers under WinNT 4.0 Workstation, but it said that the drivers are incompatible.

I was wondering if you might have managed to get this unique piece of hardware up running in an NT 3.51 or later environment by any chance?

I tried looking for a Freedom Graphics card several years ago unsuccessfully but accumulated more knowledge than leads in the end. There is not a lot of information surrounding this card, aside from a couple of reposted E&S press releases providing hardware specs and characterizing it as a ‘cut-down’ Freedom Series graphics card for the PC market – an April 10, 1995 InfoWorld magazine piece states E&S’ intention was to transform a PC into a mid-range Silicon Graphics workstation.
Freedom Graphics was initially showcased during Fall Comdex in 1994 (November). The card was scheduled for a release sometime around March 1995, after a delay the last mention of a launch was August of that same year – I am not entirely sure when or where the card made it to market. The card got a bit of press coverage in the context of VR during 1995, the hardware was exhibited with one of E&S’ in-house game demos called Midnight Manor. PC Magazine’s March 14, 1995 edition (p183) briefly discusses the cards capabilities in a paragraph alongside a picture of what seems to be an earlier version of your Park City board.

E&S’ 1996 fiscal year report reveals the company was experiencing issues during the mid-90’s: fierce competition in several markets as well as restructuring (i.e. reductions in all business groups). According to this report, sometime in 1995 E&S eliminated the entire Freedom Series product line, because it was not profitable. Hardware and software support seem to have continued across the various platforms and operating systems for some time – judging by the documents, press releases, and announcements put out by DEC, HP, IBM, and Sun.

Thank you for reaching out! Don't have any good news, unfortunately.

Well, I did try several things, but so far I haven't been able to find newer drivers.

- contacted Evans & Sutherland. They've responded by saying they've long sold the graphics business, but someone might have some archives in Collins Aerospace office in Salt Lake city. I've tried looking for people who worked at E&S on LinkedIn, sent some requests — no luck.
- like you, I've tried looking for vendors that shipped their computers with E&S. DEC's site isn't available on Archive.org, HP.com is semi broken. I did manage to find some mentions of HP Vectra workstations using E&S cards, but it looks like they used later REALImage cards, not Freedom. AFAIK, IBM didn't use E&S on x86 machines.
- talked to some professional graphics cards collectors, but I haven't found anyone with a Freedom in their collection, let alone drivers for it.

I've got my hands on a cheap Intel PR440FX motherboard yesterday (dual Pentium Pro). Pretty useless thing for games, so I might as well turn it into a Windows NT 3.51 workstation once I find some EDO-DIMM memory. Too bad 3.51 can't run any OpenGL games (that I know of), but there is no guarantee that Freedom can run Quake, either.

The Mario 64 PC port can be compiled to run with OpenGL.

HP FTP archives exist on archive.org . Unfortunately, there are no content listings. If you are motivated enough, you could download them and look for drivers .

According to this press release, Win9x drivers was planned:

All this info is from Google Groups. I cannot find any info that Windows 95 or Windows NT 4.0 drivers were actually released. Only references to Windows 95 says they are planned.

If you're searching for the HP products, Freedom seemed to be included in the "HP 9000 Series 700 workstations with Freedom Series"
https://web.archive.org/web/19970414133518/ht … ucts/715ds.html
Seems those workstations didnt use Windows NT/x86, but HPUX

It seems to me that these cards were only sold by OEMs into workstations (Sun Solaris, IBM AIX, HPUX, and DEC's.) and thus there were no reason to further develop Windows NT and Windows 95 drivers.

Also, please upload the drivers you got to Vogonsdrivers, or attach to this thread.