Long-time lurker, first-time poster; unfortunately, I've run into a problem that's proving rather challenging, and I figured I'd seek the wisdom of the Vogons posters. (Please let me know if this is being posted in the right place, happy to move it across if need be!)

I recently upgraded the video card in my retro Win9x build from a failing MX440SE (64MB) to a Galax FX5500 (256MB), but have run into nothing but issues with my new purchase. Having tried with both Windows 98SE and XP, I'm getting numerous Code 12 errors in Device Manager. It seems as though the memory ranges that my FX5500 is trying to use clash with the resources used by the motherboard.

Win98 claims that it's clashing with the "System board extension for ACPI BIOS", but even changing my system type back to a standard PC hasn't yielded any success, even under XP.

My system specifications are as follows:

I'd like to get the configuration working if possible but am realistic about the possibility I'll have to cut my losses and switch back to my old card/change motherboards.

Thanks in advance! I'm hoping that after finally biting the bullet and making an account, I can contribute back to the site that's already given me so much guidance. 😀

Thanks for the quick reply!
Gave that a try but unfortunately had no luck there. Removed any VIA drivers I could see (had the 433 drivers installed previously) and didn’t have any issues through the installation around file versions. Tried both turbo and normal mode within the installer for the VIA AGP VxD but it didn’t appear to change anything.
I also tried manually removing the “VIA CPU to AGP controller” within Device Manager, which allowed Windows 98SE to re-detect the GPU, but after a restart I got the same behaviour.
I’ve imaged my 98SE install so can try a fresh install as the next step, but feel as though I’m going to run into the same issue down the line...

Have you tried installing without the sound card?

Have you tried installing without the sound card?

Just gave it a try; no joy. Same error as earlier, still conflicting in the same Memory Ranges with the same ACPI BIOS extensions.
I took some screencaps of the resources window in Device Manager, will attach them when I can transfer them across.

Someone on Vogons recently had an issue similar to this and they were able to fix it by upgrading the BIOS of the video card.

It was this one, where they weren't able to use the floppy drive when they installed GeForce 3: Intel D850GB mainboard with floppy drive issue when geforce3 installed

Thanks for the pointer; trying to track down a BIOS for the video card but will report back if there’s any success (or otherwise) once it’s flashed.

Apologies for the double post/mild necro, figured I'd give an update for anyone who's encountered a similar issue.

I haven't been able to locate an updated BIOS for the Galax FX 5500 (lots of dead links on my search, closest I found was an FX 5200...), but seeing as how it's largely a memory range clash, I figured trying it with a different motherboard wouldn't be a bad debugging step. My current motherboard (Gigabyte GA-6VXE7+) only had one BIOS update available on there, which doesn't bode well. Even the AGP aperture settings only go up to 128MB which seems a little anemic for the hardware.

I've tried multiple driver versions, even including the patched 82.69 by Maximus-Dexim (http://www.mdgx.com/files/nv8269.php) but with no luck. Not sure if my configuration is particularly ill-equipped so YMMV.

I'm now looking for a slightly more up-to-date replacement that's at a reasonable price bracket to see if I can get this card working, otherwise I'll be getting in touch with the seller of the card.

Have you tried it with only 256mb of system ram?

can you check this setting in BIOS:

Resources Controlled By : This setting tells the computer to either set IRQs automatically or to allow for all devices to be assigned IRQs manually. Manual IRQ selection can be quite challenging and is usually only required when working with older, non-PnP compliant peripherals. The recommended setting is: AUTO(ESCD). 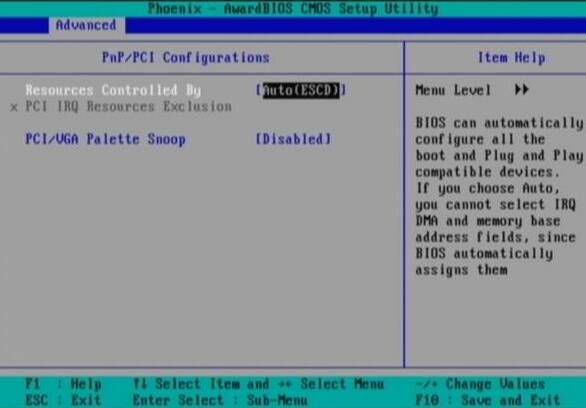 Apologies for the slow replies, had a lot of commitments (regrettably not involving retro computing) over the past week.

Have you tried it with only 256mb of system ram?

Playing around with those settings at the moment; unfortunately, Windows is complaining about memory ranges being taken, and my BIOS only allows me to change settings around IRQs and DMA. I've attached the PNP/PCI config screen within my BIOS. There are no BIOS updates available from the manufacturer either.

Screencaps of the error that I'm getting attached.

Can you change AGP aperture to 32 MB or lower? I had the same issue and this change fixed it.

No luck with adjusting the AGP aperture back down unfortunately, tried with both the lowest value (4MB) and 32MB with the same results.
I’m searching around for a slightly newer P3 motherboard for a decent price, but will have to persist with the MX440SE for the time being.

Thanks to everyone that’s submitted suggestions; there’s only a couple of lines of inquiry that I can think to pursue (trying to dig up an unofficial/patched BIOS that allows for blocking out of memory ranges as per dries_86’s suggestion, or trying to find an alternate BIOS for the FX 5500 that’s a little less needy with memory ranges) but will be sure to update the thread if there’s any joy there.