With some minor pins lovemaking... You got to have some drama in life... They managed to fix it without the need to reball.

There was some shitty soldering where the fan power resistor is (ofc cus I did it 😁), so that got a quick fix too.
Funny thing... I told him.. I did something to one of the 3pin connectors wont tell you which one, 1s later, he re-soldered the one I did, looked at the one from Anthony, nah that ones good. God damn 😁

How it runs (I might overdone color saturation, but at least theres a3d goodness)
https://youtu.be/eK0AGEqfON8

Small change, but makes a difference, some hiccups get leveled-out and it just feels smoother. 8mhz more left, then Im happy 😁
192mhz is stable, before I had some random white pixels flickering occasionally at 180mhz+ that I was sure it was memorys problem, but no, were the vsa100s, cus now I dont have them.
200mhz can run in d3d, but now for sure memory is kicking in (drakan that poor dead bald guy, you can see some random red pixels on his shiny head), some random texture flickering, starting from the logo, then I was kinda searching for it.

you found a xray?

Yea they had it to check the work, good thing too.

First page, yea... It gotten a bit bloated. Good info, what I wanted to know, just dont scroll too fast 😜 Chart numbers a bit small, zoom-in if not readable (best ux ever, I know).
Think Im done with benchmarking and powerpivot for a while...

Testing UT99 d3d mode, that I thought doesnt work, but it does, just "enable auto mipmaps" has to be checked. So the voodoo 21:9 dream is alive!

32bit is a bit too slow at 1920x800, 56.43fps. 16 bit is great fun to play, 91.41fps. But has some texture corruption, water material corrupted, also everything is a bit brighter. Hard to see on the video, because capture card does its thing, then ofc youtube compression shits on it. I will play around with the settings some more, maybe something can be done for the texture corruption.

Update for ut99
Artifacting comes from 128mb "mode" in 64mb theres no issues, also then "enable auto mipmaps" doesnt have to be checked. Reducing the brightness one step, makes the colors same as 32bit. If it werent for the "holo effect" banding, I wouldnt be able to tell a difference between 16bit and 32bit.

Since I use a glass panel case, kinda a pain to move that memory jumper if I ever need to.

So added a switch to the bracket

Card also got the copper coolers Anthony used before, didnt do a comparison, but I like how the mount and look, so they stay put.

Also tried small vcore increase to 3v, but while it resulted in a few mhz more, still not 200mhz, that Im aiming for, so removed it.

Hard-hitting question that was asked by no one, but needs answering!

The sequel no one wanted, but I made it anyway!

The sequel no one wanted, but I made it anyway!

I posted on 3dfxzone for this, gonna just duplicate the post here. This is the driver I was playing around and used for the last 2 videos.
It adds some additional aspect ratios, from the timings on page 2. Sources are also fairly updated, compared to the current driver selection.
https://www.3dfxzone.it/enboard/topic.asp?TOPIC_ID=36175

Some additional info, because I noticed some confusion.

OpenGl
Additional resolutions are added to the included MesaFx opengl icd (also glide).
There is no override for openGl. If the game supports it, if the driver supports it, it will run.
Glide override will check if request came from openGl and even if you have it set in 3dfx tools, it will ignore it.

If you are going to use another icd, it does not have these resolutions. So you will not have them.
Glide override feature will force it, because (atleast what I tested) other icds dont bother telling glide they are opengl.
But will either be letterboxed or crash in a short time.

Use Default OpenGl renderer in games settings, not 3dfx one if the game has that setting.
It will default to the one installed with the driver.

MiniGl, you should not use - ever, even with other drivers. This was a stop-gap solution for 3dfx, that gave them time to complete theirs full openGl icd. And it should be forgoten in history.

General rule, unless you have some compatibility issues with some old games. You should not use any other icd, this one is kinda the best 😉

MesaFx force 16bit
These two controls are enabled by default in the driver. Disable them to get default MesaFx behaviour. 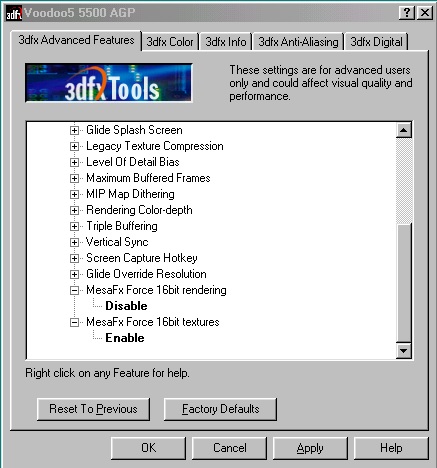 As a general rule, you should leave them disabled. If you are experiencing any performance issues with the game, try textures first, then pixel format.

Glide resolution override
This is a hack-ish solution, that will replace the games resolution with the one provided in 3dfx tools, when preparing the framebuffer. 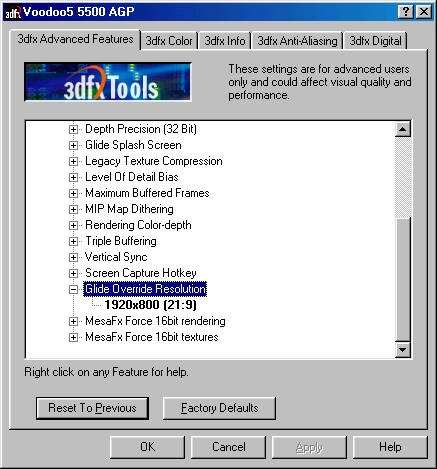 As explained in openGl section, you can leave this on and it wont bother openGl or d3d games. 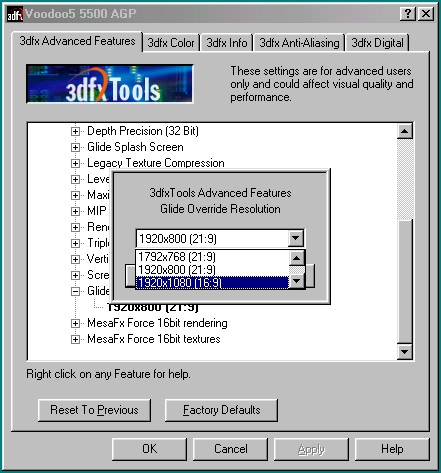 For Unreal engine games it works as expected, for others, no guarantee.
Fov has to be adjusted if the game doesnt do it automaticly.

There are also some 4:3 resolutions on the list, idea being to force higher, when game is limited to very low one. Havent found one so far that worked.

If you get, so called, pink sli lines, it means its just too much for the poor sli to handle, that can accur with higher resolutions and 32bit color. Use 16bit color and you are good to go, even at 1920x1080.

the .zip extension at the end needs to be removed from the ONE file. it's a two part archive.

Found one more issue if you running pentium4 or never Intel, link updated in original post, if you already have it, replace this file either in the install package, or windows/system folder.

So does this mean that essentially 128MB is pointless due to artifacting?

No its not pointless. Performance benefit could be disscussed and you have some tests on that topic too.

If the driver uses glide2 to glide3 wrapper (as that Razield does, so do Amigamerlins for xp, and ofc the best wide driver ever does too) you would be hard pressed to get artifacts in glide games (could still happen I havent tested 300 games). For d3d could also happen. But overall saying its the same experience as with 64mb is not a lie. (I have it on 128mb pretty much all the time, because why not)

No its not pointless. Performance benefit could be disscussed and you have some tests on that topic too.

If the driver uses glide2 to glide3 wrapper (as that Razield does, so do Amigamerlins for xp, and ofc the best wide driver ever does too) you would be hard pressed to get artifacts in glide games (could still happen I havent tested 300 games). For d3d could also happen. But overall saying its the same experience as with 64mb is not a lie. (I have it on 128mb pretty much all the time, because why not)

Well that's interesting thanks. Personally I could never get any but official drivers to work for my Voodoo 3 3000 and 5 5500 cards, but nice to see someone else can with such a unique product.