The GeForce4MX IGP tested in 3DMark2000 with different memory configurations

So lately I was going through my stash and found this neat little nForce2 board, the Biostar M7NGC that has NVIDIA GeForce4MX integrated graphics. This motherboard also has AC97 sound with options in the BIOs to configure DOS sound resources AND it has USB 2.0 for fast file transfer speeds AND it supports up to 3GB of memory. This would seem the perfect the 9x SBC would it not? Well that question isn't answered here today, instead I wanted to test the performance of the IGP with different memory configurations, as I know modern IGPs are highly dependent on memory performance to reach their full potential. This also seems to be somewhat true here. I tested it with 4 different configurations producing 4 different scores. The completed 3DMark2000 benchmark files are attached to this post. 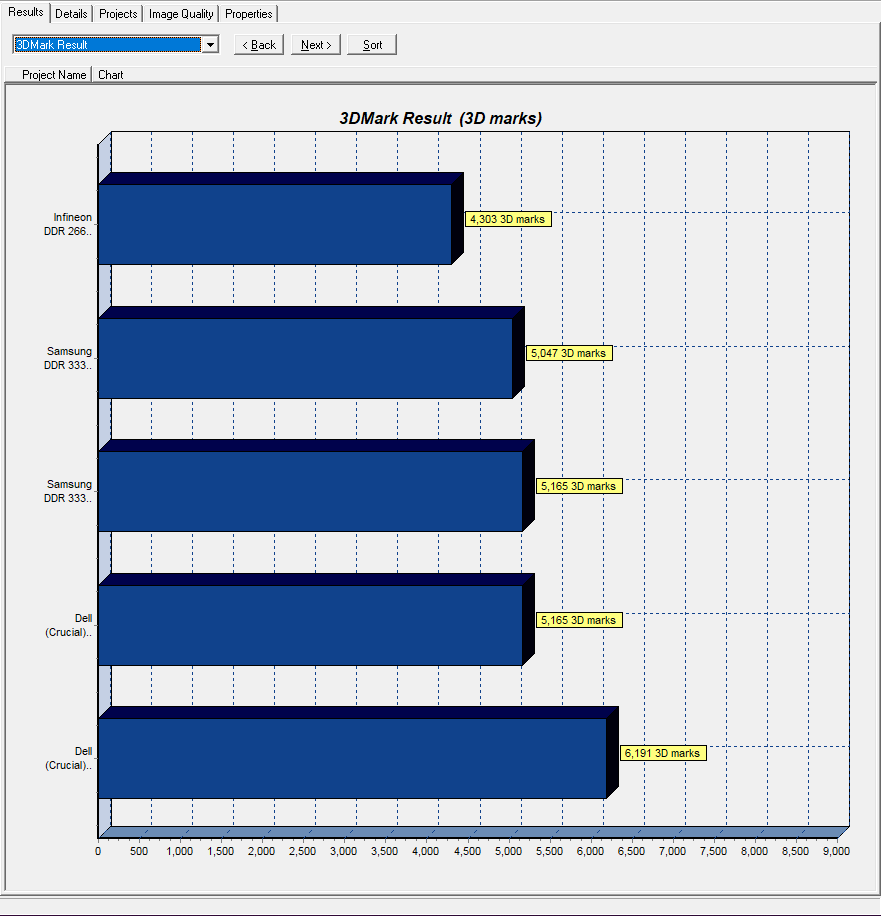 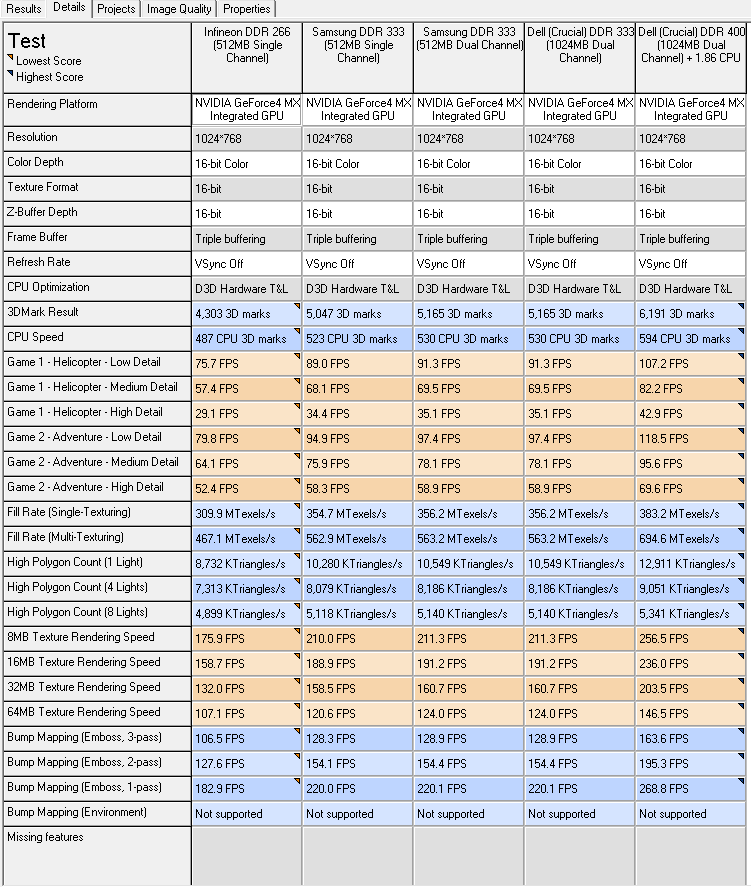 So interestingly there is no real gain at all moving from single channel to dual channel memory, which means the GPU for some reason is likely limited to accessing a single channel of memory. Modern IGPs will access all lanes available to them. Additionally there appears to be no gains in increasing memory size either. There are however substantial gains from memory speed. The DDR400 memory I had on hand insisted on posting at 333MHZ when used in this motherboard, this may be due to some other hardware limitation or one of the many quirks of AMD Socket A. I'll try to do some more testing in the following days and update this post. I'm also going to try to add results from PCI and AGP members of the GeForce4MX family.

EDIT: Added 400MHZ memory results, it should be noted that as a side effect the CPU was also overclocked by 200MHZ as well. It looks like the largest benefactor is texture rendering speed, with 70 percent gains. Other categories gained between 30 and 60 percent performance.
EDIT 2: Improved graphs

Reply 1 of 6, by The Serpent Rider

Not saying your wrong but motherboard manual suggests otherwise:

"For Dual-channel DDR (128-bit) high performance, at least 2 or
more DIMM modules must be installed. (It has to be the
combination of DIMMA and DIMMB.) With only one DIMM installed,
the memory performs only at 64-bit"

EDIT: Some chaps back in the day apparently had this same discussion, concensus seems to be that it was dependent on both the chip set and specific CPU/Memory combo.
https://forums.tomshardware.com/threads/dual- … hlon-xp.298441/

Reply 3 of 6, by The Serpent Rider

Even CPU Marks remained the same, are you sure the dual channel is working?

Maybe not a very useful comment, but my experience anyway.
I have an A7N8X-E Deluxe with an Athlon XP 1700+ and 2 Corsair XMS Pro 256 MB I'm not using today but for what I remember of a few year ago. nForce 2 Ultra 400 is Dual Channel and I have made test with one RAM module, then with two. And getting better result in benchmark with both module but nothing overwhelming (I think that was 3DMark 2001 and SANDRA 2001). Dual Channel was enabled by default and I don't remember any BIOS option for that.
Your M7NCG have an nForce 2 and with two modules, your results are a little better it seems. So maybe Dual Channel is used. My PC had an AGP card (a 3D Blaster GeForce 2 Ti), not an embedded IGP that uses system memory. But AGP can use system memory to copy blocks to GPU memory, so the results would have been affected by that.

Even CPU Marks remained the same, are you sure the dual channel is working?

If you look they did move 7 points going to dual channel. There are also very small increases in IGP performance.

I think its used, but in a very ineffective way. Or at least its not useful under gaming workloads.