One thing disturbs me since I fixed that EoB1 Stone Gem in 2006. An esthetic matter. The portraits!
Eye of the Beholder-3 changes game 1-2 portraits. And mainly spoils them.

One poor "golden" lady suddenly gets ~black~ eyes instead of bright blue. Did she practice black magic?
As for the green ninja girl.
Suddenly she gets wider nose, irregular face form ...and a face wider(?) than that of male fighter.

Such "artists".
This is just one case. There are more heroes looking like Chernobyl victims
after Beh-3 "change".

So to the point, how do we fix or replace this misery?

XWE editor (1.16 last beta) does find EotB-III character portraits in EYE.RES and allows to edit (!) but saving doesn't work. No way.
Exporting as .bmp for future editing works, though.

Maybe exporting portraits from games 1-2 and reformatting will be quicker than per-pixel editing.

In any case packing it into correct EotB-3 format (and EYE.RES) is not going to be 100% easy.

Sounds like a pretty petty complaint. I certainly wouldn't lose any sleep over it.

Sounds like a pretty petty complaint. I certainly wouldn't lose any sleep over it.

Some people beside me noticed this problem too. Might look for that link.

Just looking for ~a second~ at this matter might not be too bad. Or even "somewhat" OK.

And it's the matter of screen size also.

Try playing it on a 21 inch 1600x1200 screen for a few minutes - and it's clearly seen, this face is somewhat off. Too high, too blocky, too deformed. 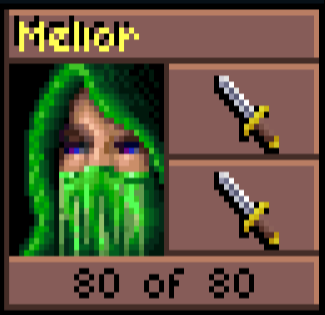 The artist responsible for game-III did it sloppy compared to games-1-2.

Also game -III has (believe it or not) "censored" some portraits. 🤣

Removing all signs of possible nudity. Games 1-2 had pseudo-anime cartoonish style wich included some "skin" to it.
Game-III did away with it.
It is not only this Golden lady on the above screenshots got "clothed".

And mostly it came with worsening the overall art quality.

Considering it it wasn't designed for that size screen it's really a non issue.Looked fine when it was on my 14" VGA monitor when came out.

Considering it it wasn't designed for that size screen it's really a non issue.Looked fine when it was on my 14" VGA monitor when came out.

Smaller screens do cover problems in these EoB-3 portraits, indeed.

But I can attest the "old" Green ninja portrait scales -pretty well-. These older portraits were quality.

In EotB-III the artist has moved the veil down - and in its place he put a very wide nose...

(Seen on the bigger picture above).

My idea is, -good- art scales (that is, scales up) pretty well. No problem.

As for the clothes ridiculous part, EoB-III did exactly what Daniele Volterra did:

"he is now chiefly remembered for having painted prudish underpants on all the nude figures in Michelangelo’s Sistine Chapel (earning himself the nickname ‘Il Braghettone’, or ‘the breeches painter’)."

Sure this is more of a nuisance - but it drops the value of the game. In the most famous series, no less!

It's a pity that the great "Eye of the Beholder" series should have such flaws. And players have to suffer it.

First they dropped that Stone gem in the demo version, then they spoil portraits...

Indeed! 😀 It's harder to say what they did right. 😀 But amazingly they did. Polearms, for example.

Nobody needed that +5 Chiftain Halberd from EoB-I when one could wield +5 Long sword and +3 Short sword. Using just 1 halberd instead was a loss.

But poking enemies from the 2-nd rank of the party (in EoB-III) with long weapons - tridents or polearms - is a good thing.

Also they dealt an interesting thing with level limits for non human races. The limits themselves originate from basic AD&D core rules.
But the game authors added "manuals" as part of a riddle game, to correct a non human character affected by that limits.

The Manuals in question also come faithfully from the DMG, Dungeon Master Guide 2-nd Edition.
Like that "Book of Exalted Deeds" offered for reading.
It might give a Gnomish cleric a new level above the limit and he/she is considered +1 Wisdom.
Just what a poor non human priest needs!

Also they included some Elven chainmail for those purist playes who detest armored casting as cheating.
Just give elven chainmail to the multiclass mages and be purist 😀
And there are only 2 sets of Elven chain, it is still exclusive equipment.

The "All Attack" button is good for greatly reducing hundreds of micromanagement clicks on separate weapons. Bright idea huh 😀

Some people blast EoB-III for placing the Mausoleum, the hardest dungeon, at the very start of the game. But I think this is good. That's how the real world works.

Danger just happens: it does not ask whether the characters are trained or not.
It's the hero's responsibility to check if the challenge is -not- too much for him/her...

So why mechanically place more challenge as the party grows stronger.

So... One might give a try to this game.

It's pretty nice.
But the portraits spoil it from the very start - and until the end. It should be corrected.

Well I fixed this portrait with XWE editor.

It doesn't allow saving if the file is still in EYE.RES pack.
But after the picture is extracted from EYE.RES one can edit and save it. Good!

Does anybody know anything about EYE.RES 12 bytes "headers" added to all files inside it?

If I change a picture the size changes and the header seems to have the size info in it...
Without changing the header the game can't find the new portrait. (Displays dark frame like Invisibility spell.)

This is a small update, here.

The nature of the problem is not Daesop.exe and EYE.RES resource headers.

Getting a "true" EoB-3 portrait out of EYE.RES and putting it back instead of the defective Green Ninja portrait just works. The bad portrait is replaced and it works.

So, the bad thing is XWE. It doesnt' save edited EoB-3 pictures in the correct EoB-3 format.

The only EAB author "converter" for these is here.

I wonder if someone knows C++ and might make this program source work backwards.
That is, make EoB-3 pictures out of .bmp's. Now it decodes EoB-3 into .bmp...