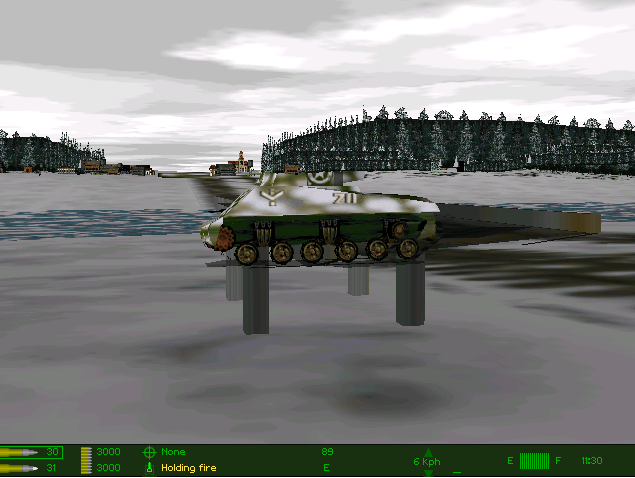 Lets get this going guys.

a lot of people are reporting that all the models and land are see through including turrets.

I have done just about everything including turning off anti aliasing to running in compat mode with no avail.

version 1 works fine but when patched to the latest v1.3 the game speed runs too fast, turret problems and ground invisibility appear.

I don't remember ever having problems with it back in the day, although I do remember it sort of sucked. 🤣

the tanks have accurate armor and round penetration values for the day something you don't see in todays games also historical turret swing movement time. PLAYABILITY OVER GRAPHICS.

SOMEONE MUST KNOW A WORK AROUND TO GET THIS GOING ON WINDOWS 7!

Are you running it on a modern PC or something? What is the system you are trying this with.

yes I have it running on a modern pc windows 7 64bit but mentioned the following problems above.

Pfft, good luck dude. I haven't seen my copy in over 15 years, but last time I ran it was when I was still using windows 95. 🤣

I'm guessing the 64bit OS is your main issue, but other than that I have no idea. You should probably either obtain an old 1 ghz P4 computer and install Windows 98SE or try and emulate Win 9x somehow.

I have had it running on my system version 1.3 as video shows, but lost the methods on what i did to achieve that after some file mixups. So wondering if others will join the quest. The game is abandonware and found off the net.

Oh I see what you mean now. Ok well hopefully someone can help run some tests for you, I switched to linux a while ago so I can't really help sorry. 😒

here is how version 1 is looking, it is really quit a fun game if you learn the keyboard commands and i don't mind historically researched ww2 tanks over graphics either 😀

Originally A while ago I started a topic over at simhq about this, but now were all stuck with the same problems for the most part.
http://simhq.com/forum/ubbthreads.php/topics/ … _7?#Post3973959

Maybe I'll have to give it another shot. I haven't thought about it in ages but now that I'm watching your videos it's kinda interesting. 😁

soooo anyone attempt to get 1.3 working?

While I don't own the game, I can recommend some things to try:

Expack thankyou for the try. I did all this just now and although the riva program and latestet version of dgvoodoo work it slows it down to normal speed, but the see through vehicle problem just wont go away. If I can find the root to that problem all is good.

I spent a good part of saturday getting Panzer Commander to work on my system so I figured I'd share since there isnt too much info about getting it working on modern systems.

No surprise there, same graphics related issues as others. The voice issue I've only seen on one other old game. Basically when the mission text is read, you hear a few words then either reads very quickly or skips through a bunch of words, before going back to a normal pace. Star Trek Armada is the only other game ive had this issue on, works fine on XP, but not on XP64 on same computer. Haven't bothered to investigate as ive been busy going through all my old games getting them to work on XP64 before switching to newer OS.

Now for the good stuff. Newer system is Quad core, 8GB RAM, GTX750 (368.81, last XP64 drivers), 1TB HDD, running on Windows XP 64bit. I tried a bunch of ddraw.dll that I used to make other games work or from the web. Eventually I found one that fixed all crashing and graphics issues: Aqrit's ddwrapper

I played with the FakeVsyncInterval config setting until I got to about 30FPS ingame. I played for a few minutes to make sure, no more crashes. 😀 The missing turrent/ghost graphics issue was bugging me so I played with the other settings. I cant say which did the trick since I was getting tired of messing around so I didnt narrow it down, but this config setting fixed the missing/ghosting graphics issue.

The game looked the same as it does when running under windows 98. 😀 😀

hi - i had been having great trouble trying to get PC to work without the blasted see through textures ruining everything - this DDwrapper helped me to fix the problem though i hve to use it in conjunction with Dxwnd otherwise it still locks up and crashes for me after a few seconds of game time.

with dxwnd, this has been fixed and the fps is round 30 so this is all good, however the game seems to be only running in software mode - i dont know why, - what do i do to get it running with the nice smooth textures and resolution as in the pics. my game resolution seems fixed as 640x480 and the software mode makes everything in the distance impossible to discern

i found the solution to getting the game to run with 3d acceleration again - in the cfg file for the ddwrapper, i had to make sure the fore directdraw emulation is set to '0'