I think it's a good thing to have a dedicated thread to SC1 and its erratic ShadowBufferMode shadow rendering.
So Pandora's thread is properly to Pandora 😁

Using/forcing ProjectorMode is obviously a solution on today systems (to avoid shadow glitches) and it works well. It's why SC1 is on Steam (and Pandora not).
But what we get forcing the infamous ShadowBufferMode that made SC1 so iconic in 2002? (yeah, 14 years ago 😁 )
Here's the state of things (art?):

*Dege Fix (see the blurring filter in action around the shadows)

So we're waiting for a final complete fix :p Jokes aside, I am very impressed by the work being put on those two games. Ubisoft tech at its best 😵 . Hopefully, someday someone can fix Double Agent which is also an absolute mess. Thanks for the heads up on both threads!

Well i dont think this will be fixed very soon. 😀
Look at SC PT, every fix is not complete. One, is fixing shadows but it's trashing the colors of the light. The other has a near perfect light but the shadows are a bit wrong. 😀

Maybe in another 14 years there will be someone who likes this game and he is a developer too. 😀 Until then we will have half-fixed versions.

Just tried and YEAUH! It is cool to see Splinter Cell work as intended in 1080p with antialiasing and anistropic filtering cranked up to absurd degrees. Also having the PS3 textures makes it look nice as well.

From what I have played so far, it seems that is the case. Up to the CIA HQ mission after the Oil Refinery in my current playthrough, haven't noticed any odd glitches yet.

I don't know if it was mentioned but the game is free on Uplay, with only a few days left until the offer is over (5 days I think)

in any case, I tried to run the game with all default settings on my win10 Radeon HD 5850 (cat 15.11) PC and it by default tries to run with buffer shadows... but it's very broken, like on the first scene there are no shadows and the light from the window doesn't work properly,
after that on the training room all shadows seem to be missing (and the lighting from the window is weak), but, at certain angles the shadows from the trees (which I think are exclusive to this mode) are visible, but they disappear as I turn the view a bit... it's very glitchy...

forcing it to projector (by removing the ";" from ForceShadowMode=0) and it seems to work perfectly fine, the same as it works on my 9500PRO with Catalyst 2.5 by default (using the recommended driver on the readme on the version I have on that PC which I think is 1.2), the first scene looks nice with the lighting and shadows working even on Lambert's face (still lower res than the buffer shadows would be if working), the training room, it doesn't have all the shadows from the other mode, but it has a few (like for Sam and some other objects here and there, but not from the trees outside), also the GPU usage is lower with projector shadows, even with the other mode mostly not displaying shadows it uses more GPU (locket at the same framerate)...
oh and forcing buffer shadows (ForceShadowMode=1) on the 9500PRO crashes the game on start, with the 5850 it works the same as with on auto and as I described earlier, it's odd that it default to the the GF4 mode, while it should default to the other, which works better.

in any case, I also tested on XP, with cat 10.something and, it also defaults to the buffer shadows, but it works slightly better, displaying a few more shadows and better lighting from the window (still no shadows on Lambert while walking and his face), and still the shadows from the trees outside only appear at certain angles (but at higher distance than on win10), but the problem with the XP test was.. projector shadows didn't work properly, like no shadows on Lambert's face,
unlike the Win10/cat15.11 with projector and the 9500PRO/cat 2.5 default settings (which looked identical as far as a I played), perhaps a different driver on win XP would fix this mode to work as intended;

but as for the buffer shadows... I have to try dgVoodoo and some other alternatives, or buy a GF4 ti.

just gonna go ahead and post this here for anyone who wants to compare the first game's graphical stuff to the xbox:
20 Mins of Splinter Cell on XBOX

Back to the subject of Splinter Cell. I have tried the Komat wrapper - nothing happens. I tried the Dege wrapper (voodoo glide). The game will NOT start with its d3d8.dll present, which of course is the part that it works with. Simply encounters a critical error (null) and closes.

I tried the nVidia 169.xx driver. But, this driver was released 2.5 years before my card was, and it ain't happening. So I seem to be out of tries. Nothing works! 🙁 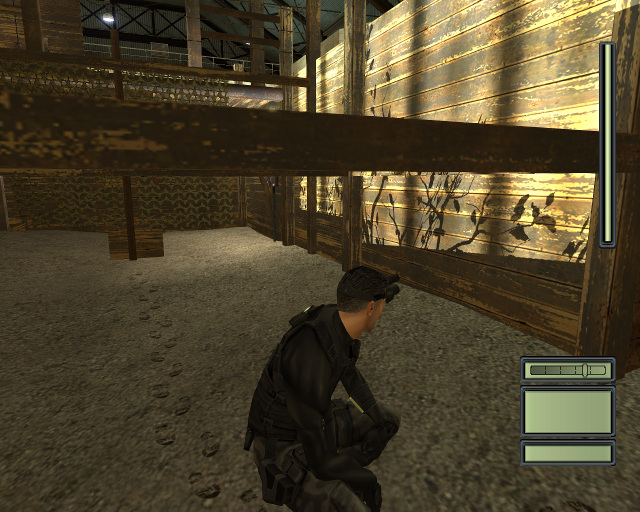 This is an effect that only occurs with buffered shadows. But, it only appears at some angles. And as you will see, this may not even be complete... 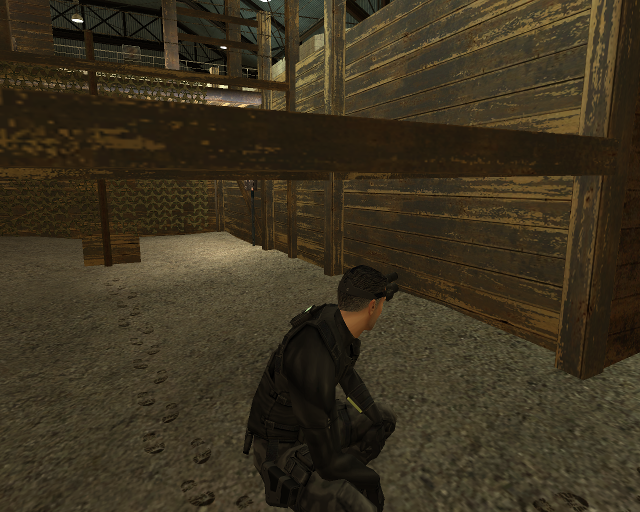 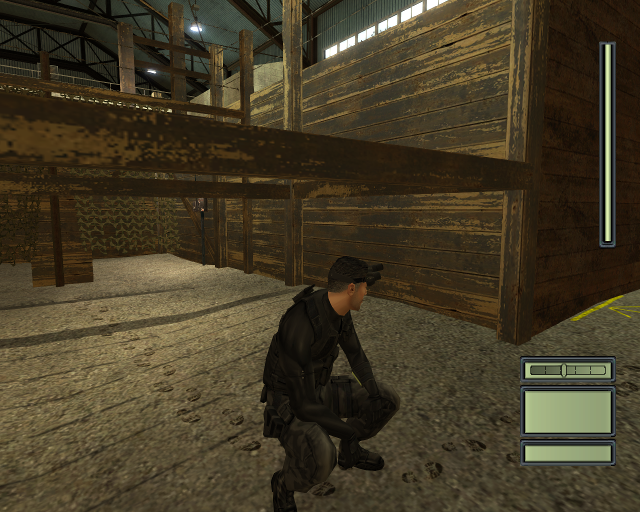 This is the scene with projection shadows. Notice that now there is shadow under those wires, although the wall is dark. This may be a correct implementation according to Splinter Cell, but it sure is lame.

An you must use Windows >=7 with the lastest DX11 software stack.

dgVoodoo2 is a wrapper (a translator) that uses DX10.1 technology, and you can use it on any DX10-class GPUs too but always with DX11 software stack installed. This basically forces you to use Windows Seven SP1/ 8.1 / 10

Yeah, I know. I wasn't trying to run it with glide, I didn't mean that. So I can run the game in a different OS to get improved but not perfect shadows or on a different computer 😵

I thought I used dgvoodoo to um, "confront" glass transparency in Anachronox and that...oh wait, maybe that was nglide.