Not Old But... Gears of War Trouble

Recently acquired Gears of War for the PC not too long ago, the original 2007 release and it works fine but I am having issues with it trying to work with Creative Alchemy on my Windows 7 machine. I have a Sound Blaster X-Fi Titanium card installed in my machine with the latest drivers and version of Alchemy and any time I run the game, I get this error when I have Alchemy enabled for it:

I am doing this without any form of bypassing the copy protection and I have updated it to Title Update 3 to bypass the digital signature issue so I have no clue as to why it is saying that. I have also tried changing the date in the dsound.dll file to before 2009 when the game was having issues with expired date signatures to be safe. Anyone encountered this error before or is this a new issue?

Just looked at my gears of war and the folder contained the file ReadMe Davros.txt
and it says
"Change date to june 2008 to avoid modified executable error"

Title Update 3 fixed that at the time dunno if that's still the case though:

"In early February, an expired digital certification problem rendered the PC edition of Gears of War unplayable, and Epic has now released a patch to resolve the issue.

This update fixes an expired digital signatures issue that prevents all earlier versions of the game from launching. This is a required update. Please download and install the update before launching the game."

UWP apps require a certificate but certificates expire...... Only thing I've been able to find out is that supposedly this "only" affects installing the app or updating it. Supposedly it doesn't affect running the app.
If anyone uses UWP it would be interesting to see what happens when the date is changed for an installed UWP app or if you try to sideload an app with an expired cert.
You can't backup a Windows Store UWP app seperately from the OS so no way to test backup and restore with an expired cert.

As for the OP it looks like Gears of War is complaining about Alchemy....is Alchemy compatible with Gears of War?

EDIT: Did not read the fine print, it apparently isn't... well that blows but oh well. Maybe I might get XP up and running someday and try it that way with the card.

I also just tried the solution there and I still get the error.

did you try changing the date ?

This game do not need creative alchemy wrapper as this is an openal Game, by default the game use software openAL.

You will need ALCapsViewer (x86 version) https://mega.nz/#!fEUxSDpB!IN4RxoT8I_i-drwwJW … QRJ4PowJ-RBoxKA to check what "openal name" have your sound card (for hardware sound acceleration), this is dependant of the OS/Sound card combo.
Here a screenshoot for example on my system : http://imgur.com/5pew4I6
You can also check with this software the difference between generic software and other mode (EAX etc...)

Under the [ALAudio.ALAudioDevice] section you should see two entries:-

Delete 'Generic Software' and put the devicename of your sound card.

This is also the same thing for Mass effect 1, which try to use Generic Hardware (which only exist on Windows XP and no more after) as open al sound card before using Generic Software, you can use the same trick to reactivate EAX 5.0 and hardware acceleration.

I just tried that and the game has no sound when I do that method.

Curious I just try myself and it work (sound seems a bit louder on menu).
This will not work with SPDIF connection.
I do not have my old X-fi here to test with it.

Can I have a screenshoot of your ALCapsViewer ?
Can you check also on both ALCapsViewer in the component tab that you have no dll difference (exept path)
There was a know issue on creative drivers for X-fi that during the installation process one of the DLL was not copy, resulting in missing hardware part, AFAIR this was for the X64 part, I don't know if creative have fix it since. 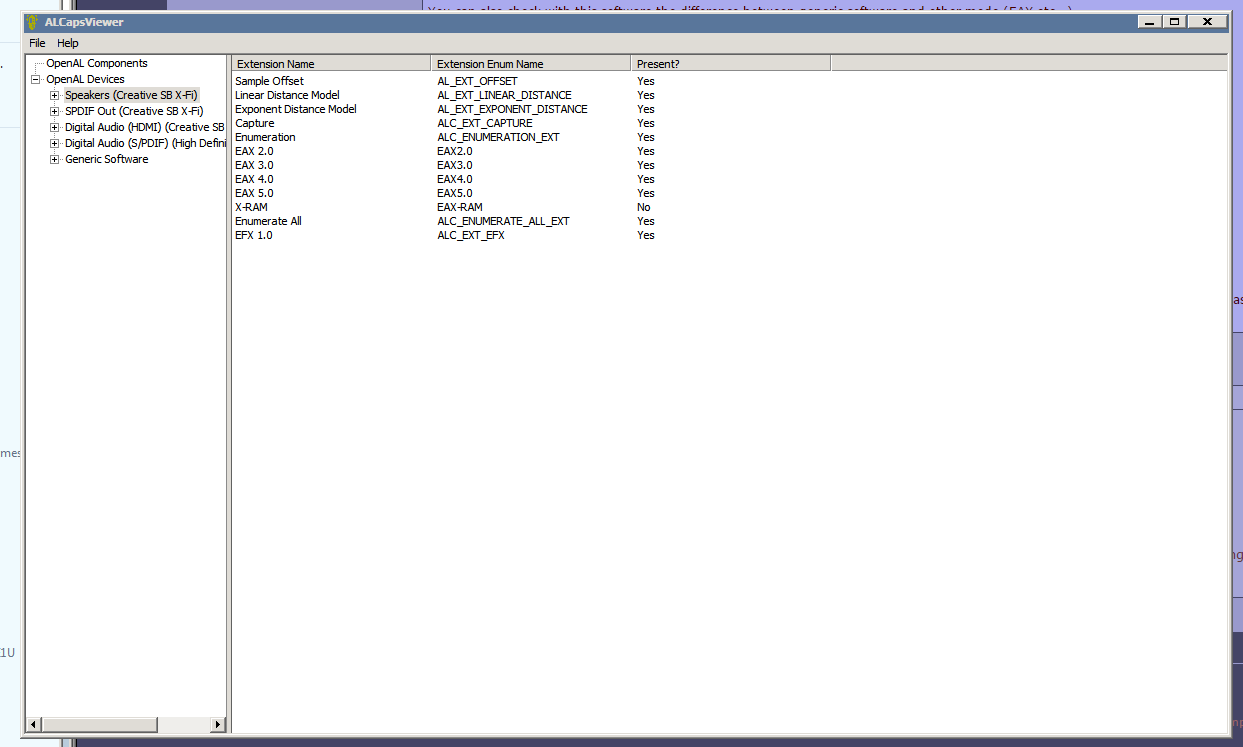 Should be : DeviceName=Speakers (Creative SB X-Fi)
if you use analogic connection to your sound system.

Should be : DeviceName=Speakers (Creative SB X-Fi)
if you use analogic connection to your sound system.

What I used and I get no audio outside of the GFWL interface.

I haven't had any problems getting this game to work with my x-fi with openal. Didn't need to do the speaker stuff, works fine just by putting "SB X-Fi Audio [EC00]" as the device name. You can make sure its working in the game's log file:

I got it working using the name from the 32 Bit version of the program and it worked. Sadly have to reinstall since it is not signing in with GFWL for some reason which might have happened when mucking with files to get the audio to work.

Yes the name that appears in the 32bits version of ALCapsViewer can be use for all x86-64 (32bits) programs
The name in the x64 version of ALCapsviewer only work with X64 program.
Gears of war is a 32bits program.

Yes the name that appears in the 32bits version of ALCapsViewer can be use for all x86-64 (32bits) programs
The name in the x64 version of ALCapsviewer only work with X64 program.
Gears of war is a 32bits program.

Thanks for the help, the intro sequence sounds leads better in this mode than with generic software enabled. THE JAIL CELL SOUNDS LIKE A PROPER JAIL CELL! 😜

So is your problem now fixed ?