I'm trying to track down or/and create a canononical list of all the alternative controllers which have existed and been supported over the years by various games, even if they were only supported by one game at all.... if someone knows of others who have done this already please tip me off, otherwise please help add to my list or give pointers/rumors for me to track down. 😀 Even rumors or foggy memories is fine, i'm just trying to research them in general... I want to eventually put up a website database/this is preliminary research for now.

My purpose is like my name "high fidelity gaming" - my interest is in tracking down (and eventually publically databasing) the BEST POSSIBLE WAY to play all sorts of older retrogames, in particular focusing on some of the lost branches of history... things that started to grow in a certain direction and were either abandoned or no longer doable on a modern PC. Example - many games play fine on a modern PC, but sometimes things like proprietary graphics API's, "better" sound systems like A3D no longer used on modern systems, and (this topic) - unique controllers gave a better, or at least different experience, of game immersion at the time they were out.

Comments on NONgame controllers, ie controllers intended as input devices for applications (such as light pens, Wacom tablets, Spacetec controllers for CAD and such) can also be mentioned. I'm most interested in games, but also curious what else was out there in the past...

P5 Virtual Reality Glove - another 6DOF controller, like the Nintendo Power Glove but working far better, I know it was supported in Hitman 2. (as I have hitman 2 and the glove though I never tried playing the game actually, because lag made it harder to play than kb/mouse)

Steering wheels including force feedback is another obvious area of controllers... of note was I think the Act Labs RS series - which had realistic force feedback, support for an H-gate shifter and clutch and was basically considered the ultimate wheel in the late 90's up to 2000 or so. (based off just memory right now)

Flight simulator yokes - multiple of these existed in various forms, though I haven't tracked down a complete list or whether any were notably supported outside flight sims...

Gravis GRiP pads - allowing 4 buttons and 4 players from what I remember, in the age of analog Dsub gameports, they were directly supported by some games but i'm not sure which ones offhand. FIFA and some WWE Raw game I think. Word was they were not the best quality of joypad however. 😜

Force Feedback joysticks often using MIDI or something, I forget exactly who made them or what supported them offhand but a friend had one in the late 90's before USB was popular. Whether games could only use that method (MIDI) and not later USB i'm not sure, i'd like more information if so...

Gravis Phoenix - an early multibutton joystick, with throttle and such, usable for flight sims, apparently for games like Wing Commander and similar. Analog and gameport support, with I believe a keyboard plug in for the extra buttons. However I don't know if it added any new abilities (I mean you could use a joystick and your own keyboard and recreate the controller - my biggest interest was for things totally unique/not replicatable without the original controller and hacking) Gravis had a line of other multibutton joysticks as I remember which added buttons often via the keyboard connector.

While the intended 3D-control is exceptionally lousy, the CyberMan does provide ancillary "force-feedback" vibration in most games that support it, e.g., Doom, and the diskette version of Quest for Glory IV.

Logitech wingman warrior was supposed to be for doom type games

SpaceOrb -- nice unit, don't know why it never worked. Excellent for Descent. There is an arduino project to make this work through USB on current OS. I use mine in Fallout 3 and Stalker and I'm still in love with it for FPS titles!

Act Labs RS -- have this, too, and I still use it for my GLide racing titles on my P3 machine. Like it better than the Logitech G25 I have on my PS3. Super great controller for its time.

Advance Gravis Phoenix -- I liked this controller, too, although friends laughed at me when I bought it. It's funky styling matches my Intensor LX chair. I think it's also a good controller. I like that I could custom map KB keys to it.

Not necessarily odd, the Mouse Systems Bogeyman line of controllers (flightstick, gamepad, and steering wheel) were ahead of their time, IMHO. I have the full complement still stashed somewhere and plan to rehabilitate them when I get my 386 machine completed for some early 90's gaming. 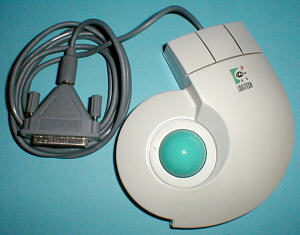 Now this is my kind of thread! We have the same goals when it comes to retro PC gaming.

For starters, I realize now that it's hard to get used to Descent source ports because the SpaceOrb allowed higher-than-normal turn rates. The DescentBB community actually considers it cheating!

Right now, I want to look into early head-tracking devices like the Forte VFX-1 and the Virtual IO i-glasses, the latter of which I know is supported in MechWarrior 2 and Terra Nova: Strike Force Centauri for certain. The latter may even have analog head-tracking for all I know, but only with these exotic input devices. (Even better yet, if someone could make the TrackIR emulate those old devices...)

I also wouldn't mind learning more about early force-feedback standards, just in case they don't get along well with newer computers and controllers. For instance, Die By The Sword has a SIMFORCE.dll in its directory and kills the centering force on my MS SideWinder Force-Feedback 2, but provides no actual forces on my Win7 64-bit machine. Haven't tested it on older computers yet.

Some of the earliest FFB sticks I can think of are the CH Products Force FX, Microsoft SideWinder Force-Feedback Pro, and Logitech WingMan Force, all of which used DIGITAL gameport interfaces (read: used the MIDI pins and generally are incompatible with cheap gameport-to-USB adapters made for analog gameport devices).

Oh, and there's a few standard computer mice floating around that aren't so standard because they offer force-feedback, or at the very least, rumble feedback. You generally don't see that in a mouse these days...I believe the protocol/feature was called "iFeel" or something like that?

I used to have one of those. 😁 The X-axis roller on it was screwed up and I couldn't move the mouse cursor to the right unless I put a lot of effort into it. 🤣

Ahh, how could I leave out force feedback? But along other lines, not necessarily an interface but since you mentioned the VR glasses, on my D3D machine (S423-1.8GHz) I have Erazor III with the Revelator glasses...which work nice with my Gateway Destination DL36 monitor (albeit only at 800x600). They don't work with current LCD's....at all because of the timing I guess.

Is there a force-feedback "mouse"? I would love to feel the effect of gun recoil and machine-gun vibrations in FPS games.

Yeah, try "Logitech Wingman" mouse, they show up on e-Bay once in a while but usually for too much $$$.

My brother had this weird mouse. It was mounted on a stalk that floated in a square base. You could move it to all four corners of the square and every point in between and it functioned just like a normal mouse, it just had a weird feel when you used it because of it not siting directly on the work surface.

There was some kind of multimedia keyboard with customized layers for games so you didn't have to remember all the key commands, the Katt Games Master keyboard:
http://www.wcnews.com/chatzone/threads/katt-g … keyboard.14687/
http://www.hamtwoslices.net/loaf/karga-gamesmaster.JPG

And another one from Quickshot, the Master Pilot 98:
http://www.quickshot.com/game_controllers/mp98.html

I just picked up a Space Orb 360 cheap but it didnt come with any drivers. Anyone got a set or is able to point me in the right direction my net searches keep telling to download driver detective. 😒

Gravis Phoenix - an early multibutton joystick, with throttle and such, usable for flight sims, apparently for games like Wing Commander and similar. Analog and gameport support, with I believe a keyboard plug in for the extra buttons. However I don't know if it added any new abilities (I mean you could use a joystick and your own keyboard and recreate the controller - my biggest interest was for things totally unique/not replicatable without the original controller and hacking) Gravis had a line of other multibutton joysticks as I remember which added buttons often via the keyboard connector. I have (and I'm willing to sell) one of those.

It has 4 axis and a lot of buttons. 2 axis are on the joystick, and the other two are on the base, at the left (see the picture). The round module could be rotated and separated (as an early rudder/throttle control).

The four axis and four buttons (trigger and three of the joystick buttons, as fas as I remember) are wired to the DB15 port, so it is incompatible with dual joystick cables.

The rest of the buttons could be mapped to keys (you connect the joystick to the keyboard input, and the keyboard to the joystick cable, as most barcode readers). It had a software (only for DOS) that programmed the device and allowed profiles to store predefined configurations.

Support? Mostly in any game that allowed joystick/keyboard input. Because the device could be programmed you could generate a profile with your buttons mappings and the game would only see two joysticks with two buttons (remember the four axis) and the usual keyboard, so there was no need for special support. It worked like any modern joystick (Saitek X45, X52, those things).

This file (from Gravis FTP) lists the profiles availables, but for other games you would have to create your own profile (unless the game included a profile for it)

Drawbacks? OK, it's an analog joysticks, so it needs calibration every time you run a game (but every joystick at the time was analog). It has a lot of buttons, but the designs is not very comfortable. The rudder/throttle thingy is not very intuitive... I'd rather prefer a real throttle (like those on Logitech Wingman) but use the rotation to control the rudder is OK.

And the last drawback is that the programming software is only for DOS. If you have any other software that keep you from getting direct access to keyboard ports (Windows NT? OS/2? Linux?) most buttons won't work as expected. In those cases, you would have to boot in a friedly environment (DOS), program the joystick and then reboot to play your game.

Did I mention that I have the original box and I'm willing to sell that thing? Also I have a Logitech Wingman Extreme Digital if any one needs a more "usual" DB15 joystick...