The the 5x86 works flawlessly in the Asus SP3 board?

Yes, it even is correctly recognized by the BIOS: 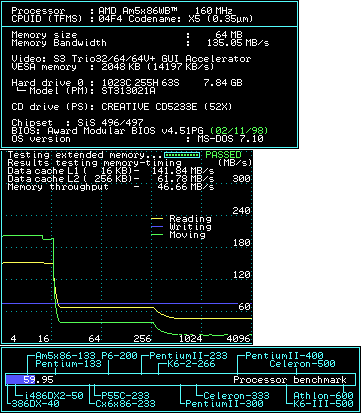 Actually have that board and it's bother AP4 but my SP3 is just rev 1.2 and early chipset which means no BIOS updates 😖

Note that the 3.3V regulator for the CPU (U9/Q4) is a bit weak on rev. 1.2 boards. I already had to replace mine... and added a brutish heatsink to keep it cool: 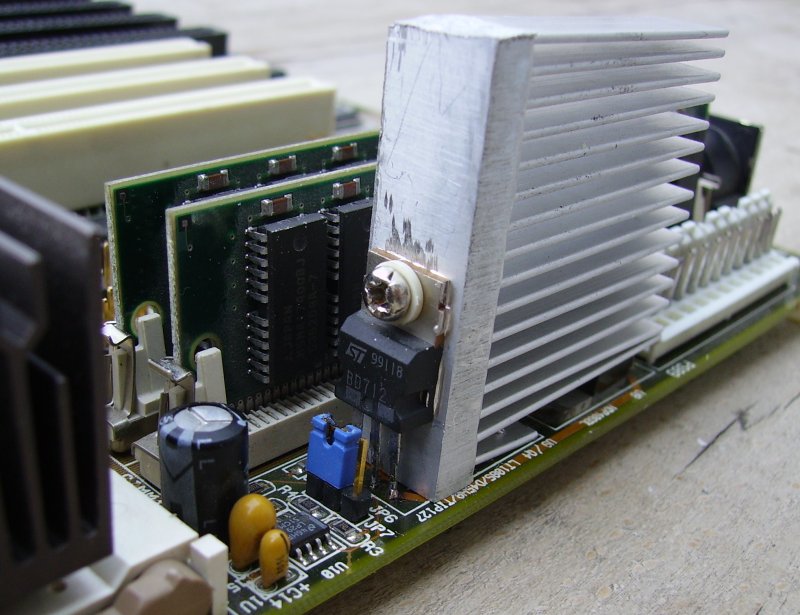 I'm curious on how the Intel chipset performs on the AP4

According to an old C't Magazine test, this one should be a screamer. PCI transfer rates almost as good as the Saturn chipset, and VLB speed is reported to be excellent as well.
It just shares one flaw with all other Intel-based boards - FSB is limited to 33 MHz 🙄

BTW, your test results are very interesting. It supports the old saying that ET6000 and ARK2 are among the fastest, but the Virge GX2 is a surprise. I will look out for one of these...

Bummer, I get divide overflow when speedsys is run in dosbox.

Seems like ASUS has removed the BIOS updates for the Sp3 board from their site...only the manual can be downloaded

Glad we still can find it here: http://www.elhvb.com/mobokive/Archive/index.html

I'm going to check what revision I have on my chipset etc and try and update..

Nice sst score you got there 😎

BIOS date from 1998?? I thought socket 3 design/life was buried back then

The weak voltage regulator might explain why I can't get my Pentium Overdrive to work neither on my AP4 or SP3 board and it gives me problems on my VL/I SV2G GX4 so it might be a general problems on the Asus boards?

This is how the booring the GX2 card looks like

guess what prog made it to my config.sys 🤣
..I wonder if windows perfomance is also affected by this...

BIOS date from 1998?? I thought socket 3 design/life was buried back then

Whoa, that reminded me that I still have the beta 0307 BIOS flashed. This version is indeed from 1998 and while I'm not really sure what it is supposed to fix, it introduces two annoying little bugs: Warm reboots via ctrl-alt-del fail when the CPU is in protected mode, and the turbo button does not work reliably any more.
Thanks for the hint, flashing back to 0306 now.

The weak voltage regulator might explain why I can't get my Pentium Overdrive to work neither on my AP4 or SP3 board and it gives me problems on my VL/I SV2G GX4 so it might be a general problems on the Asus boards?

Nope, the regulator can't be the problem in this case, because Socket 2/3 Pentium overdrives come with their own voltage regulator and only take 5V from the board, so the mainboard regulator does nothing...

guess what prog made it to my config.sys 🤣
..I wonder if windows perfomance is also affected by this...

There also are a couple of other programs to enable K6-2/3(+) features. I simply chose MXK6OPT, because it autodetects suitable MTRR ranges and is very simple to use. If you want to try out other utilities (also available for Windows), look here, here and here.

thanks 5u3!
the main prob with mxk6opt is that it cannot work with EMM386 , maybe I use setewb+k6wc1 in this section of my config.sys...

I thought the overdrive CPU's had a stepdown Vr from 5V to 3.45V?

On the AP4 mobo i have to set the CPU voltage to "3.6V cyrix voltage" for the Pentium Overdrive or 486DX4 Overdrive CPU to work...the system refuses to boot when set to "Intel 3.3V" jumper setting

btw. the PCI performance sucks on the AP4 mobo...did some tests with the same CPU and memory config I have on the Microstar mobo and I max out at only ~7.7-7.8 in pcplayer

I second that. The AP4 is poopy.

Lol, the man who has written MXK6OPT taught me computer architecture at the university. He knows almost everything about CPU architectures, listening to him talking about the evolution of the x86 processors is pure pleasure.