Unreal was an unbelievable game in its day. I played it to death. I should give it another play.

I just loaded up Exult and messed with it a bit for fun. I measured the guard pace rate at 35.6 seconds, which according to my current formula, comes out to 32 fps. Interesting. I wonder if this is a fixed rate that the Exult developers chose, or if it's the game's organic speed with frame limiting enabled?

I am very close to finishing Unreal. It does seem to be one of the longest, if not THE longest FPS I've ever played. A bit too long... 😵 I just finished the Skaarj Generator level and starting The Darkening. I'm guessing another 1-2 hrs tops before I finish? I've been playing since March 25, so what, almost 2 months? I'm ready to be done with it.

Also slowly getting into Dark Sun: Shattered Lands. I'm not as into it as I'd hoped, but I think it's starting to grow on me. Also played Inca a bit last weekend and got 4 save game codes into it. I'll keep at it, it's weird and interesting enough. 🤣.

A reminder to everyone that I still play and make custom content for Unreal 1, but not so much UT99.

Do you plan on playing the "expansion pack" Return to Na Pali, clueless? It's... much shorter than the standard game.

Do you plan on playing the "expansion pack" Return to Na Pali, clueless? It's... much shorter than the standard game.

Probably not, at least not right away. I'm already fighting burnout on the game. Would love to see it through, but that's about it.

I wish I had the retail copy of RTNP because it's UPak.u is alot less messed up than the one shipped with Unreal Gold.

I'm not sure we have a Screenshot thread? I've been playing a lot of Need for Speed Porsche 2000. Great game, looks fantastic, sounds fantastic, great presentation, in depth career mode, lovely car physics... what's not to like?

I wish I had the retail copy of RTNP because it's UPak.u is alot less messed up than the one shipped with Unreal Gold.

I played both versions back in the day but wasn't aware of any differences. What got messed up?

I would love to see some of these old virtual cockpit racing games done in VR (maybe without the spazzy arm though. 😜 ) As far as I'm concerned, graphics were "already there" back when this was around and it should run at permanent 60+FPS on just about anything these days. All it would take is someone with access to the source code who doesn't buy into the hype that you need Pixelshader 12 and individual-blades-of-grass rendering for a good VR experience. Great game.

In other news, I installed Half Life from my original 1999 GOTY CD onto my currently only working Windows machine - a C2Q Q9300 with a GTX750TI running Win7 - and it just worked straight out of the box (literally.) I wasn't even expecting it to run, but it's fine. The only thing I couldn't get 'working' is switching it to use the right analog stick on my Xbox 360 pad instead of the left one, so I set up a good old keyboard & mouse combo and off went Dr. Freeman.

...so I guess I'm re-playing Half Life now. Got through Anomalous Materials and caused the resonance cascade failure before I had to save & quit yesterday. Fun times. 😜

I'm currently in the arduous process of fixing up the standard "Coop Game" in Unreal with my own handpicked fixes and hardcoded hacks.

Yes I do plan to put up my own server to the world someday. Not yet though, but soon.

One of the most important changes is making it so you don't have to squint to read your Translator.

Played and beat Crysis 1&2, never played them until now oddly enough! However Crysis 2 on Extreme really hurt my Xeon 771, temps maxed at 70c think my aio cooler is struggling with the increased GDP over the Q8400....had flashbacks to my G4 MDD

Not really a game but Ford Driving Simulator 5.0 for MS-DOS

Just finished Inca, still playing Dark Sun: Shattered Lands, and about to start Crusader: No Regret. I finished Crusader: No Remorse back in late January, so I'm looking forward to more of the same.

I hope you enjoy the extra death animations that game has.

and more importantly the no limit on how many weapons you can carry!

Finally stopped playing Diablo 2 in February, went through Terminal Velocity in 5 days (yes, really), then took up Diablo for a while; in late April I switched back to Diablo 2. Last week I stopped again and grabbed another old favorite, Midtown Madness.

Not as many features as the sequel Midtown Madness 2, but still a lot of fun to play IMHO 😊

While I could have used my Win98SE retro gaming PC, I decided to give myself a challenge - make Midtown Madness work in my Windows 7 Ultimate 64 bit PC. With 3D hardware support. And widescreen mode.

To accomplish this I followed the instructions here:

I will mention this only works well in Windows Vista and 7. Windows 8/8.1/10 still have issues unfortunately 😒

Not sure if this thread is for retro or modern games, but, I'm playing Assassin's Creed Syndicate* on my Xbox One S that I got for free last month after renewing my Xbox Live Gold Subscription since Wednesday night.

*Turned off the blood and gore.

As for me, I DNF'd Dark Sun: Shattered Lands. After playing it off and on for a month, I just could not get into it. I never looked forward to firing it up, despite the numerous positive reviews. The MT-32 music was great, but it was just a little too slow for me. Lots of wandering around in a desolate world with little to do from my perspective. So last night I started Anvil of Dawn and I'm already more drawn to it than Dark Sun, so hopefully this one keeps a grip on me for the next couple of months.

Also, making good progress on Crusader: No Regret. I'm almost done with Mission 2, Map 3 and it's at least as good as No Remorse.

Risen 3 for me - not a game that takes itself seriously and nor am I serious about it, but it's very easy on the eyes, the animations are good, the mechanics are surprisingly numerous and well implemented, and even the voice acting is decent in this one which is rare for a Piranha Bytes. The quests are generally quite silly but there's lots to do and the world is fun to explore: 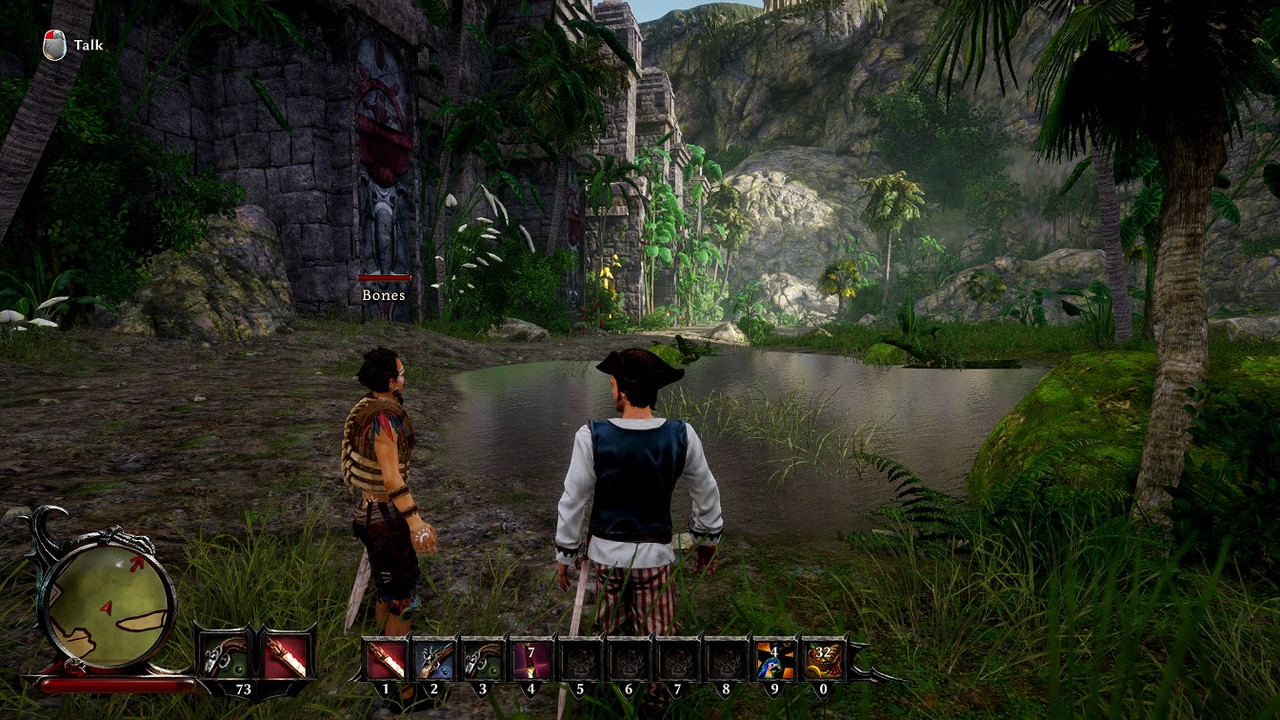 I'm playing SimCity 1 since I've got the panning speed sorted thanks to slowing my VIA 733MHz CPU down (thanks helpful forum member, who's name I can't remember!)

I've been having a lot of fun playing DOS games, this is the first time I've got stuck into them instead of just messing around with hardware and benchmarking

I delved into Geneforge 1 while on vacation. I can understand now why it is considered one of the better RPGs. IWD Enhanced will need to "sit" for a while...

I've started Rune a few days ago and slashing my way through hordes of undead enemies as a Viking is extremely relaxing.

The level design in this game is absolutely wonderful. A lot of the levels are filled with secrets and different paths to explore and there is so much variety that I don't feel bored after hours of gameplay. Frequently changed sceneries, from very big and open levels to smaller ones were you need to find your way around locked doors and blocked paths...that's fun!
If you want, you can even outrun most of the enemies when you're low on health. But you're almost never low, since you're essentially a one-man killing machine.

The voice acting is also very good with some great villain voices and a good performance from Thor.

I'm looking forward to the sequel that is currently in the making.

Some good ol' RCT2. I have nearly 4000+ hours invested into the RCT franchise.