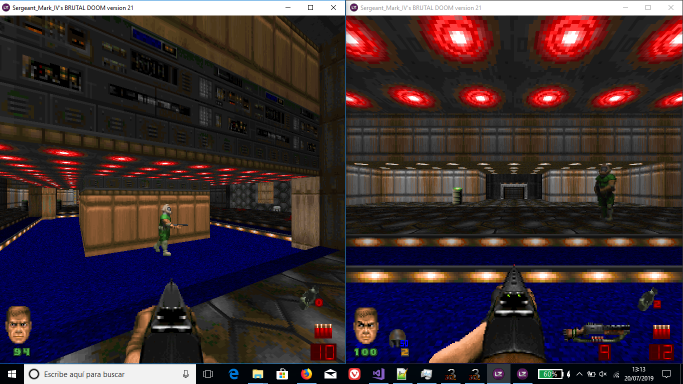 Original post
From the creators of GZDoom Vintage, ZDoom LE, ZDoom32, ZDoom CL, RUDE and probably even more i can't remember right now comes LZDoom. 😀
This is the old ill-fated legacy build. Yes, D3D and DDRAW are back with a vengeance. Just kidding. 😜
This will help some people experiencing crashes with the vintage build on some old intel and ati "cards". Of course it will run on older hardware.
I could release a non SSE2 build if there's enough demand but for XP minimum. Same for Linux.
It's based on GZDoom 3.3.2 so it's the new old GL renderer with most of the later stuff added. AFAIR a couple of important things are missing: 2D shape and thick line drawers, i added fake drawers so it won't crash. Also you can expect a few extra silly features. 😀
Of course this is unofficial. It's here:

I've just released a new beta, i planned to do it a few days ago but i was busy with other stuff. It's the beta 2 from OCT 31 aka Helloween Edition.
The dither shader is a half-assed feature in LZDoom and needs testing on Intel cards, it should be fast with it disabled and i expect it to be slow when enabled. Also the softpoly renderer crashed at high resolutions, it's fixed now.

I've released a new beta (see first post). Of course the dither shader had to go so no more intel fixed versions (not needed anymore).
This delayed beta is in sync (is that term even correct?) with GZDoom master as of 11/29 to clarify things.

Just released a new version and it's a huge update, now it's on the zdoom.org download page. 😁

Is it possible that this source port supports the -recordfromto command for making TAS demos? I have been searching for a port that will let make TASes on UDMF maps for a while.