This is the latest iteration of the weekend project, it use to be a amd k6 build but sadly the Super 7 motherboard was getting worse originally the first ide channel died, then started the reboot randomly.

You sure use a lot of harddrives 😁
I typically run just 1 harddrive in any of my rigs (except for some of my primary rigs).

Looking at the back of your computer cases (the ATX ones) I couldn't help but notice the bad ventilation holes in your ATX cases (really small holes with lots of metal in between).
What I did was ask a friend to cut out the meshes completely, then after adding the fan I added fan grills I salvaged from dead PSU's 😀 (you can view some pics of how this ended up looking in my retro rig thread (link is in my signature)), it cools a lot better that way 😀

What custom ME service pack are you using? 😀

Well, I think I like the components better inside the cases, rather than sitting on the shelves. 🤣

Actually my two active retro rigs have only three disks each. One for MS-DOS 6.22/Windows 3.11 and Windows 95, one for Windows 98 and the last one (mostly SCSI) is for storing uninstalled app and games, plus the ghost images of the other partitions. Actually 3 disks per rig is probably my established standard. 🤣

My XP box, which is also kind of a backup rig, has 8, yes, but first 3 are for Windows XP, Fedora, and Mint respectively, one for storage, and the last four were for video capture as a RAID10 array (during the times my handycam had no HDD but 8mm cassettes instead). The other retro one with the 8 disks is an anomaly, by design. It had 17 different OSs on it sometime in the past. 😈

I'm sure better ventilation is a good thing and I'm sure will most probably extend the life of all the components concerned, but to say the truth, it is not that important, according to my experience. My first CPU was an Intel 386SX-16, and I clearly remember blistering my fingers after an occasional touch to its surface while running. It still runs after about 23 years, and believe me, I did some serious crunching with it during my computational fluid dynamics and aircraft engine design courses, in years long past.. 😈 I never used anything but the stock coolers for any of my CPUs and yet haven't lost any of them to heat.

Besides, I really don't like the idea of introducing metal chips into my cases, I've seen more than once what they can cause.

Your mods look very nice and cool, in anyway.. 😀

the Athlon machine Im currently using for games from about 1997-2001 (more or less) , The machine went through several incarnations, but this is about as good as it gets.

Lian Li PC60 Case (really like this case)
Enermax 350w EG365P-VE
Abit KG7-RAID motherboard (apparently one of the best boards back in 2001 for the AMD 761 chipset)
Athlon 1400 with Zalman CNPS3000 Copper cooler.
1GB DDR Corsair Platinum 400Mhz (it was either this or really cheap RAM from 2001, I figured overkill was better than substandard)
Voodoo5500 , I know this system would have probably suited a GF3 more, but a GF3 can't run Glide
SB Audigy (specifically the OEM variation with the coloured ports and MIDI port , but otherwise identical to the retail version in features and quality)
Adaptec S2100 SCSI adapter with 64MB cache.
300GB Seagate Cheetah 10k SCSI HDD.
Toshiba SD-M1212 DVD drive.
Sony branded Floppy Drive.

the HDD is divided between Win98 and Win2k (130/170 GB respectively), with the Win2k partition being NTFS. Some people might find that stupid, but I use NTFS when I can , and I try to put as many games as I can on Win2k (Win98 is mainly for the earlier games that don't play nice with NT based systems)

this system somehow gets the V5500 to run Max Payne with all the detail set to max and still get above 60fps in alot of situations , it will even play Warcraft III at around 30-35fps at max detail , but only at 800X600 for both games , the V5500 does have its limits

I once had one of those Lian cases, the only thing that I hated about it was the board tray used those stupid clips instead of regular brass. Wasn't a bad buy though for only $20 a few years ago. NICE that is a really cool looking computer!

NICE that is a really cool looking computer!

Agreed. Where did the case come from and where can I get one? 😎

I actually wanted one of these cases, but a lack of desk space means I have to stick to tower cases.

Where did the case come from and where can I get one?

Most probably Germany. The case is from the Siemens Nixdorf Scenic series, some of these come with a translucent green sliding front cover, which looks even better.
I don't recall if they had models with standard ATX layout, at least the ones I've seen were slightly proprietary and would need to be modded in order to use a standard ATX mainboard. Very nice! I love the simplicity and solid construction.

Where did the case come from and where can I get one?

Most probably Germany. The case is from the Siemens Nixdorf Scenic series, some of these come with a translucent green sliding front cover, which looks even better.
I don't recall if they had models with standard ATX layout, at least the ones I've seen were slightly proprietary and would need to be modded in order to use a standard ATX mainboard.

But good information to have; thanks for ID'ing it.

after - MSI/nVidia Geforce FX5200 128MB - going to try GTA:SA and NFS:MW on it (NFS MW will work anyways,minimum requirement was a Radeon VE which seems quite ridiculous for me)

PSU - Delux 400W which I'm using in both my second system and this one (second system is Raven,I'm swapping the PSU between the systems when I need it)

and that's all. I need a PS/2 keyboard for it,since my white A4Tech one doesn't work due to USB legacy support not being enabled. 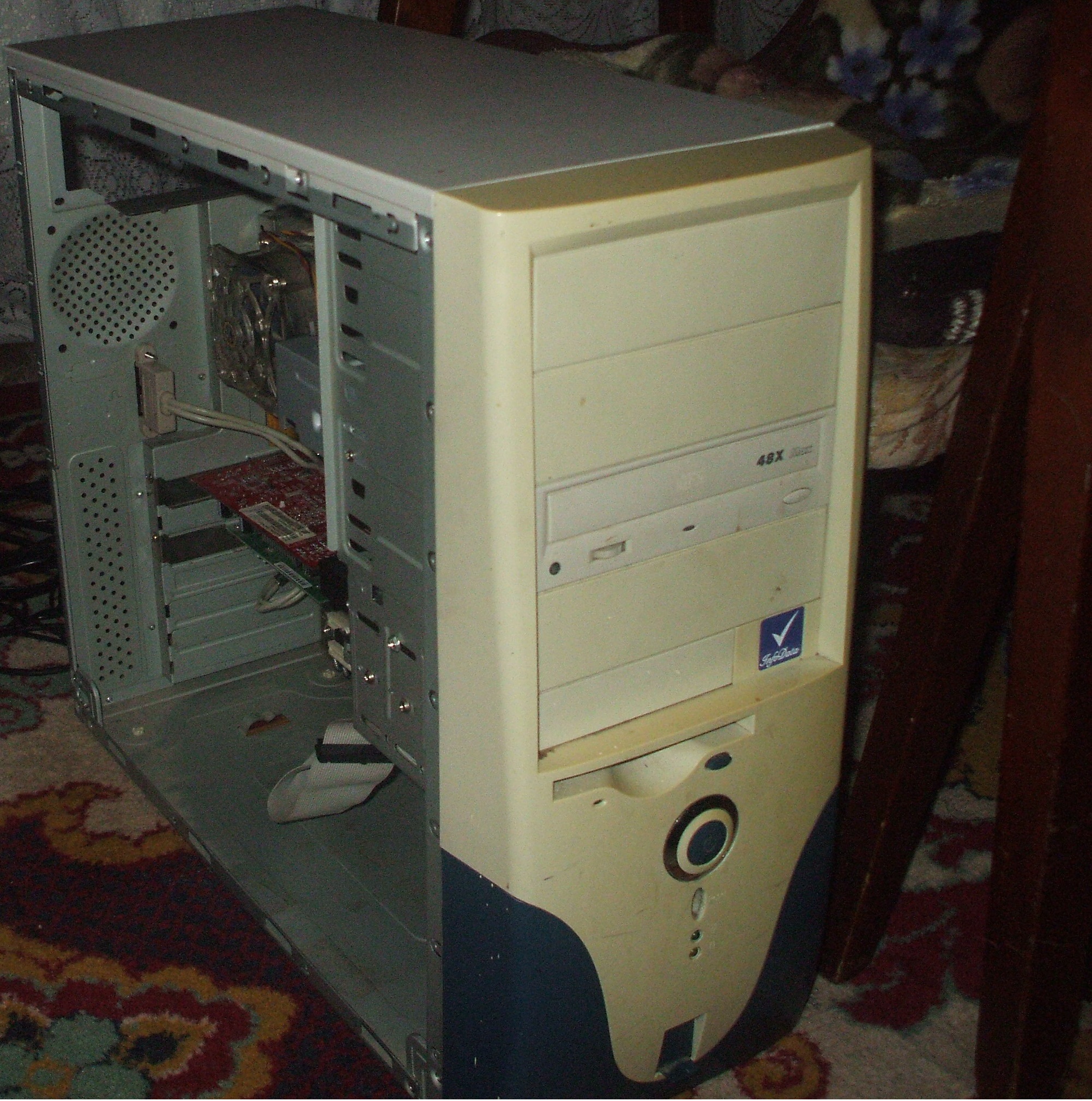 I just completed some recent upgrades to my old gaming PC. I'm running DOS 6.22/WfW 3.11 and Windows 98 SE in a dual-boot configuration.

You can also see in the background a ViewSonic A75 CRT. I purchased it brand new for ~$400 from CompUSA.

NICE! I just ordered one of these cases yesterday for my main computer since it uses mATX. I love how 90's these cases look.

Very nice! I love the simplicity and solid construction.

Do you like when dust is sitting inside of your computer too?:)