Compaq not sure what OEM it is, but looks nice so i guess is something good, and is like brand new..

DELL is all SONY Trinitron inside, 21 inches, it is too damn heavy... 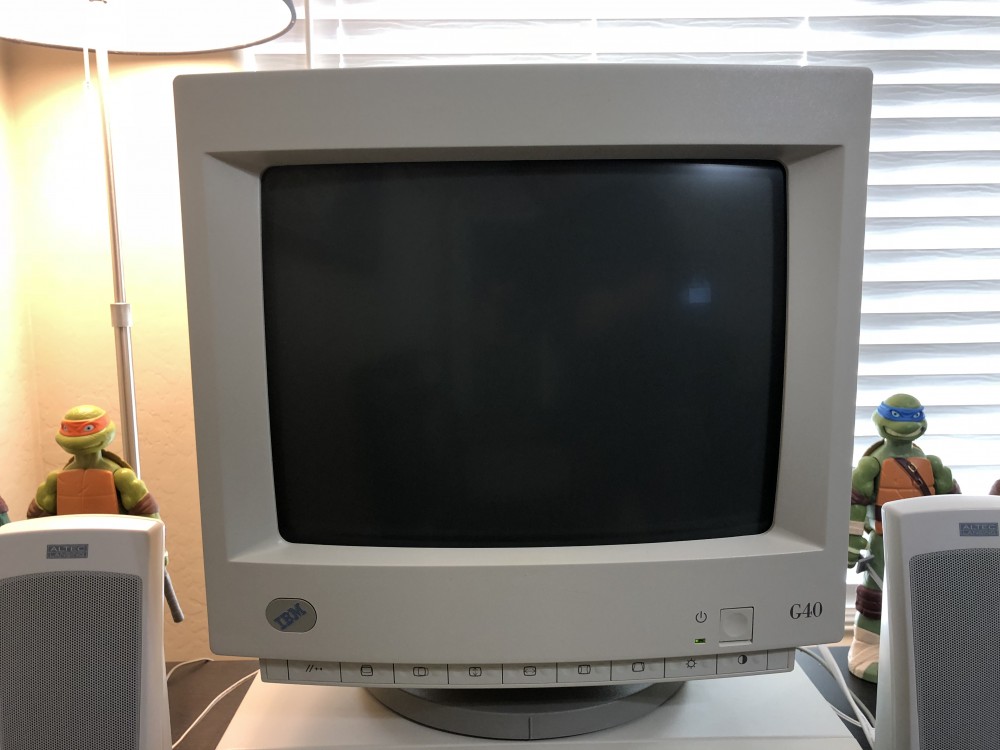 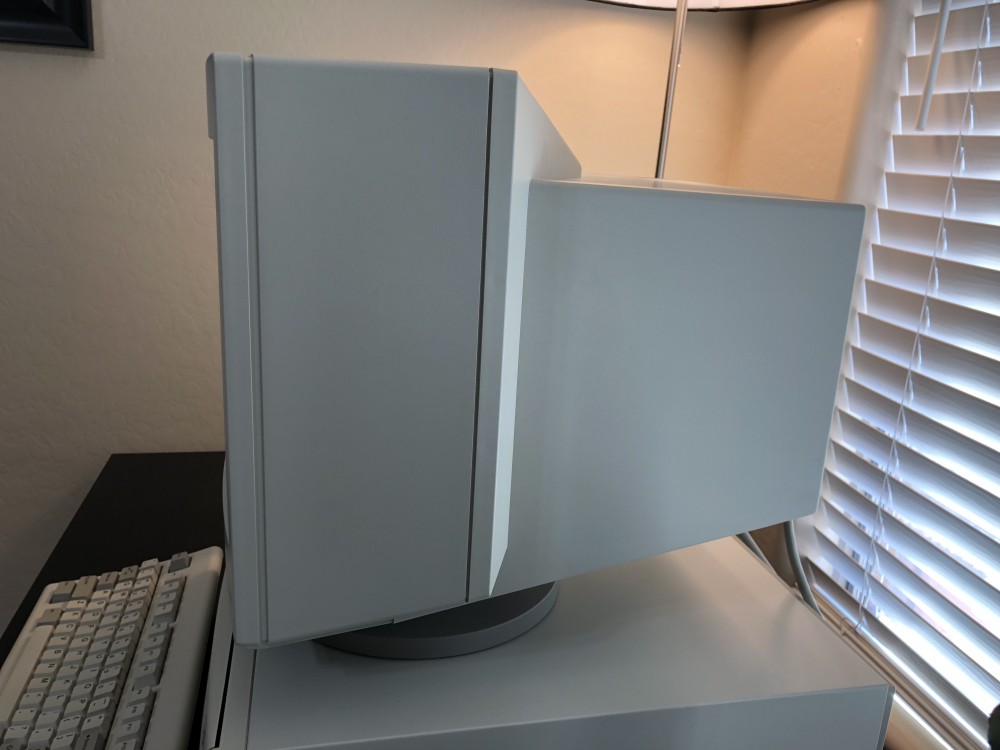 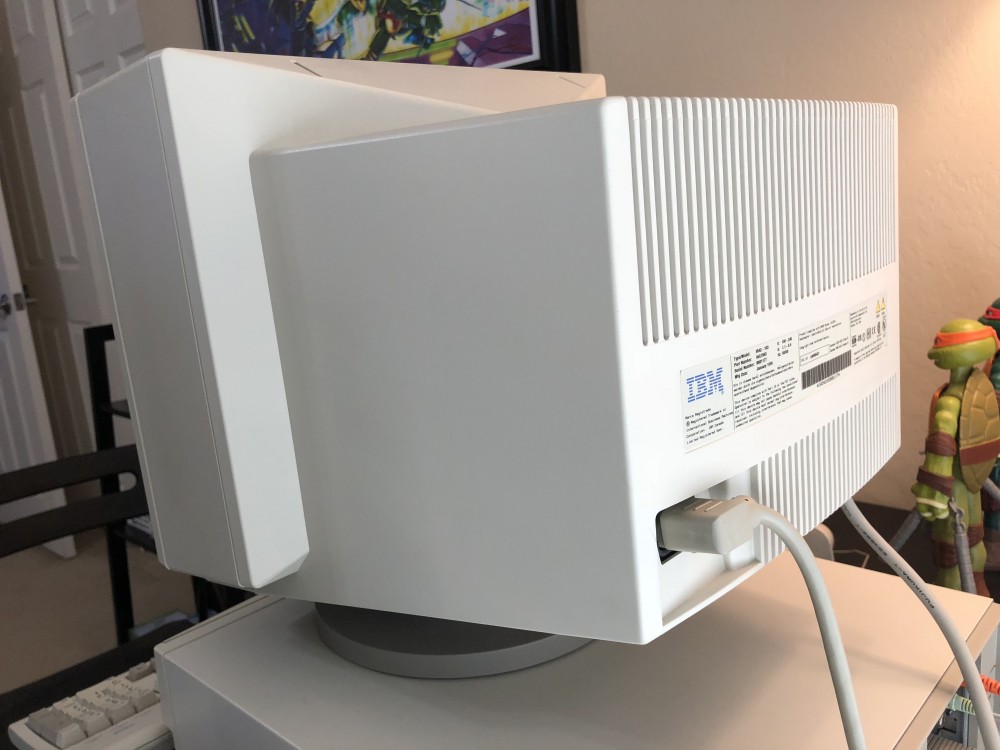 It still works, but it makes a slight high pitch squeal sometimes and it looks a lot blurrier than I remember.... Probably needs new caps and a tune up, which is currently beyond my abilities. For now it just sits in the corner, waiting to be revived.

Here are the few CRT monitors that I have in my collection.

Sony Trinitron Multiscan CPD-E240 (owned this ever since I got it back in 2005):

Dell M782p (another spare monitor, does a hissing noise when powered on, so might need a recap): 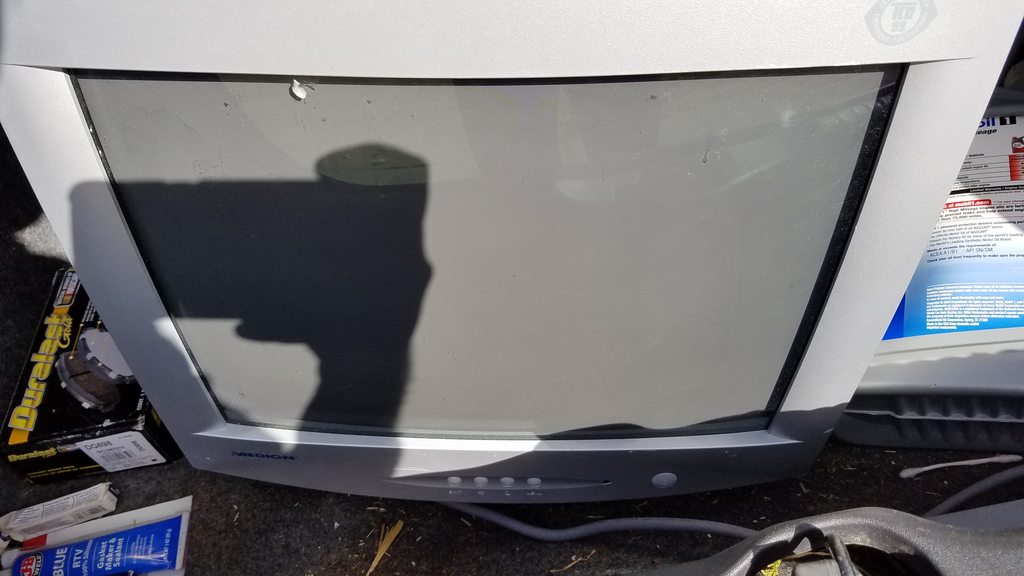 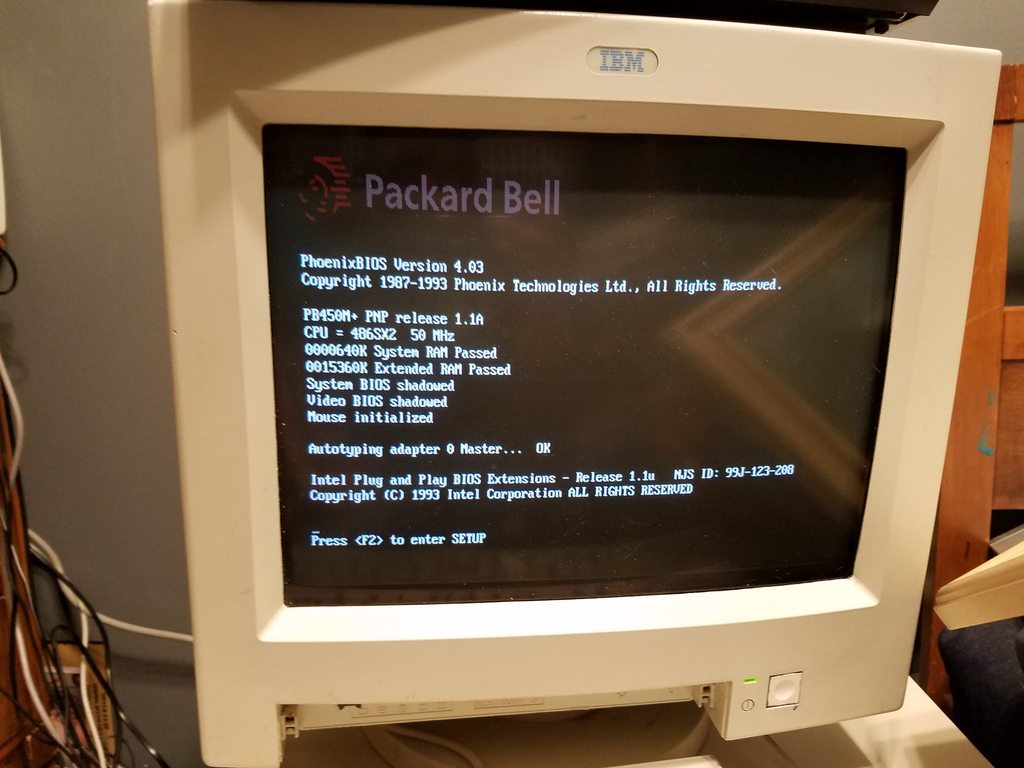 Compaq not sure what OEM it is, but looks nice so i guess is something good, and is like brand new..

DELL is all SONY Trinitron inside, 21 inches, it is too damn heavy...

The Compaq one came with the Presario 6000 series desktop computers back in 2002. I had that exact monitor, but a burn-in (ghost) image defect.

I dumpster-dived this AcerView 34T a few months back. Looks fantastic after a flyback G2/focus adjustment.

This is almost certainly a rebranded Hitachi Superscan Supreme 803. I have that monitor back at home, and it is mindblowingly good. No surprise as it retailed for $2000 in 1997. I took some pictures back when I got mine.

This old lady is the monitor of my Pentium 3 retro daily driver!

It's a Crystal CM-1402E made in 1989 by Intra Electronics, 14" shadow mask monitor with a .31mm dot pitch. It was made under several brands such as Arcus, ARX, Ancer, MGC, Crystal, Intra, Socos, JET and many others. It's one of the earliest "8514/A compatible" VGA monitors and supports only three resolutions (640x480, 800x600 and 1024x768 interlaced) along with a few sub-resolutions. It's not a real multiscan monitor and makes it akin to an IBM 8514 in terms of features. Picture is kind of fuzzy but it's not blurry and unreadable: the "fuzziness" of the screen smooths out fonts and graphics giving to the overall appearance a very pleasant look and doesn't make 640x480 look huge. It's also not a quite flickery monitor despite I run it at 60Hz. What I love most of this monitor is its colours, as they are very deep and vibrant, something I could only dream of on a flatscreen display.

I had some niggles with it the first time I got it: red tended to flicker and disappear randomly until it finally stopped flickering for good, for a period it jittered when being turned on at cold (fixed the issue by using a non grounded power cord, I suspect it was a ground loop issue) and its connector is quite mangled since it was a bit mistreated after two decades of storage.

Thankfully all these issues have been fixed but in future it definitely needs a capacitor replacement to make it work as good as it was back when new. I love this monitor to bits.

Probably not what is meant by this thread, but this is what I'm stuck with, so I'm using it as a monitor 😉 (I'm yet to figure out how to photograph this thing without moire, over-brightness, and white-balance issues.)

Found by chance at a TV repair shop down the street- they were looking to get rid of it. Since it's a 14" set in good shape, and supports NTSC (not a very common thing around here, but the TINT control gave it away!), I figured it'd be a more 'appropriate' CGA display than my more modern flat-screen TV, even if the latter deals surprisingly well with CGA.

Can you handle the superior quality of 80-column text over composite?

Never seen one that had it, unless it was a so-called 'multi-system' (dual PAL/NTSC) set. I think this TV may actually handle PAL as well, since it was manufactured in 1999 and that was becoming common then.

I should buy a real camera; a phone is hopeless at photographing a CRT head-on: 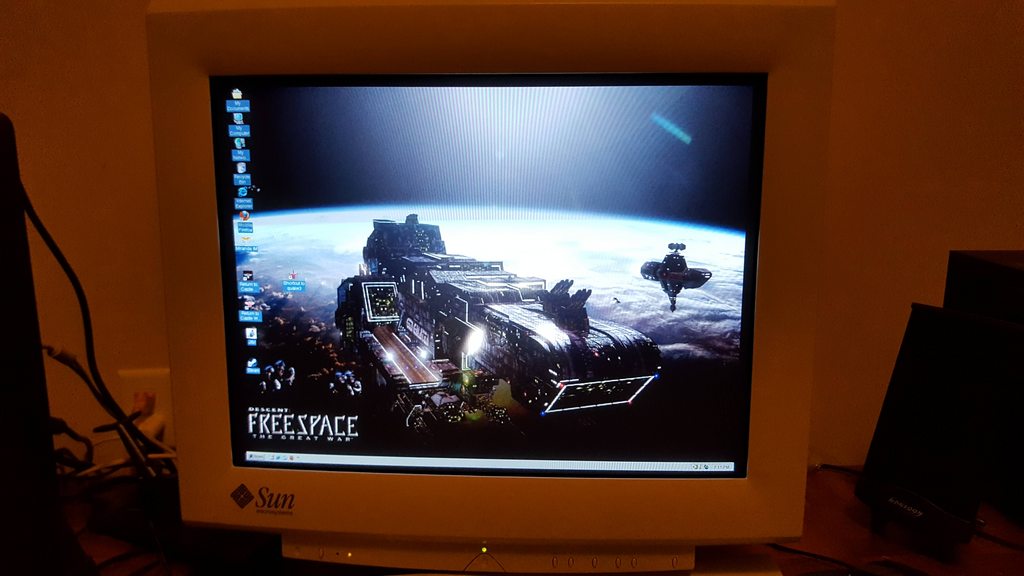 It's not actually that dark in the room; that's the phone throttling the exposure when it gazes into the CRT.

Not a bad photo of the CRT. Was that monitor distributed by Sony, hence the name Trinitron?

No. The tube and possibly some other components were built by Sony, Sun marketed and distributed it as a monitor for SPARC workstations. It was not marketed as a Trinitron in the material, but it has a Trinitron CRT inside. 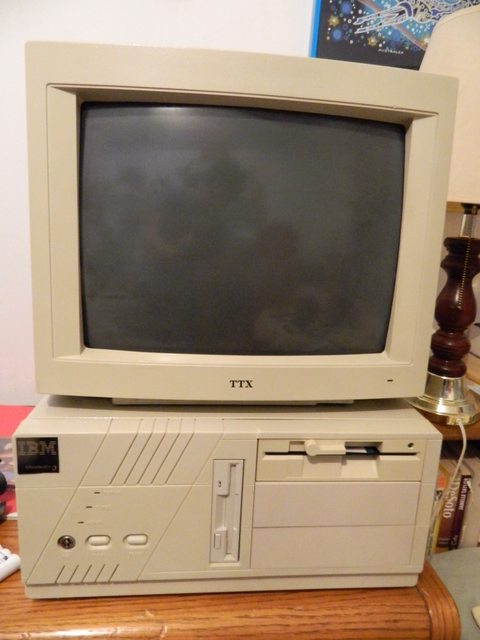 This Samsung Syncmaster 3Ne for my 486 DX2/66 - Very clear and sharp image. I occasionally will use it for Photoshop work: 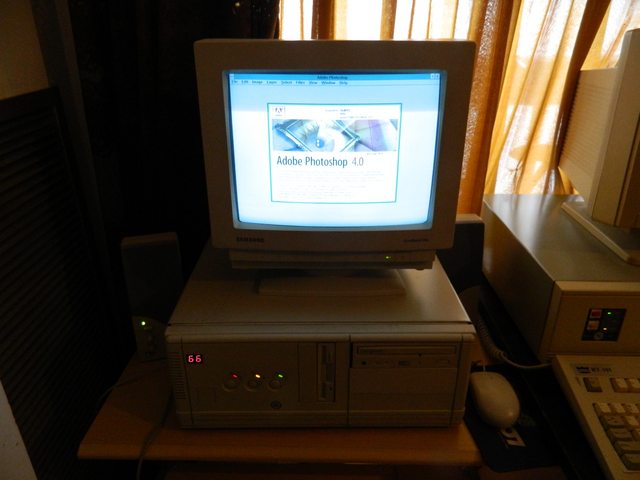 And 1989's DataTrain DC-509 VGA monitor that came with my 386SX. I have the original packaging and styrofoam for this one. 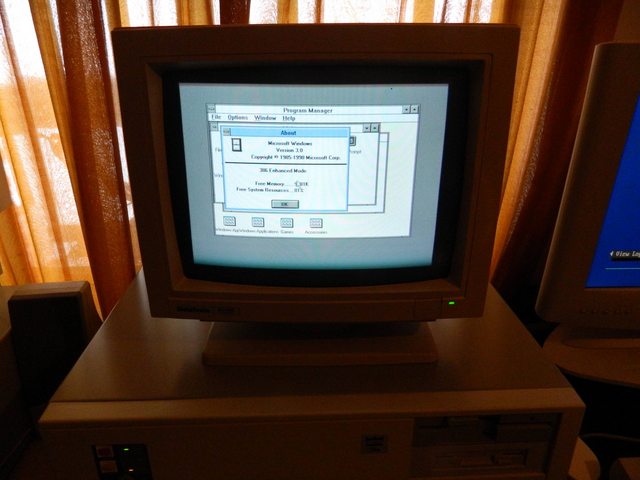 Decently clear image for what it is.

I also have an NCR 17 inch in the closet, a 14" Digital XGA and another 17" TTX in original packaging that I will try to bundle with a PII system when I'm ready to sell it.

OMG I love that. No idea they made those (well, I don't know much about FM Towns models in general.) Looks SO good in that charcoal grey too.