Apparently these niche CPU upgrades were produced in really large numbers - like lower tens per model.
That's why they are so easily obtainable today.
😀

Found another interesting thread on vogons related to the the same 2x33MHz CPU model:
The Systempro; Benchmarking (TI486SXL2-66)

Looking at all numbers around - 2x40 seems to be the best overall option.

Found another interesting thread on vogons related to the the same 2x33MHz CPU model:
The Systempro; Benchmarking (TI486SXL2-66)

On my chips, I determined that for full stability, 55 MHz is max, but the FPU will suffer at 27.5 MHz. The IIT x2-50 MHz FPUs I tested wouldn't do 55 MHz, unfortunately. Do you recall if the max average frequency that Cyrix FasMath chips can do?

Looking at all numbers around - 2x40 seems to be the best overall option.

I tried several FasMath FPUs - none of them tick reliably beyond 50MHz.
The test i mentioned was performed without FPU.

Stumbled upon another 286 motherboard based on the very fast VLSI 20#-16 chipset.
New old stock. Crisp in the antistatic bag.
Soldered crystal oscillator socket. Inserted SIMM slots in the SIPPs for testing.
Works as expected. Gets to 25MHz easily. Didn't check if it can do more.
Basically - similar characteristics as the other ones showcased in previous posts.

Came with 4x1Mb 80ns SIPP RAM modules that don't work reliably beyond 16-20MHz.
There was a 16MHz rated Siemens 286 CPU in the socket. While it worked well at 16MHz, the heat dissipation was extreme. Haven't seen this kind of stuff before.
25MHz Harris or Intersil ones running at 25MHz or higher get warm, but nothing like this.

Here is the guy: 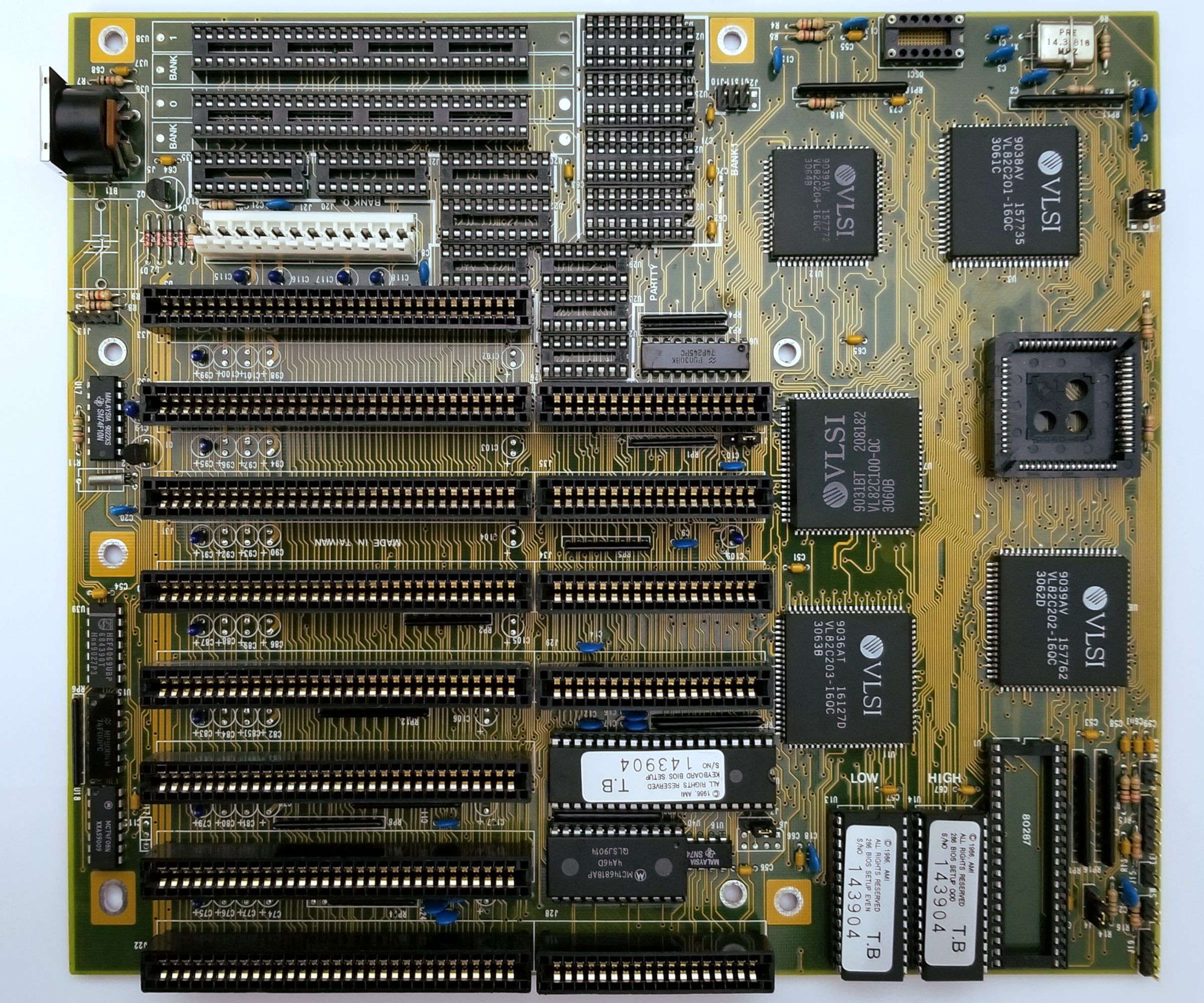 Kind of nothing new to see at this point, except ... 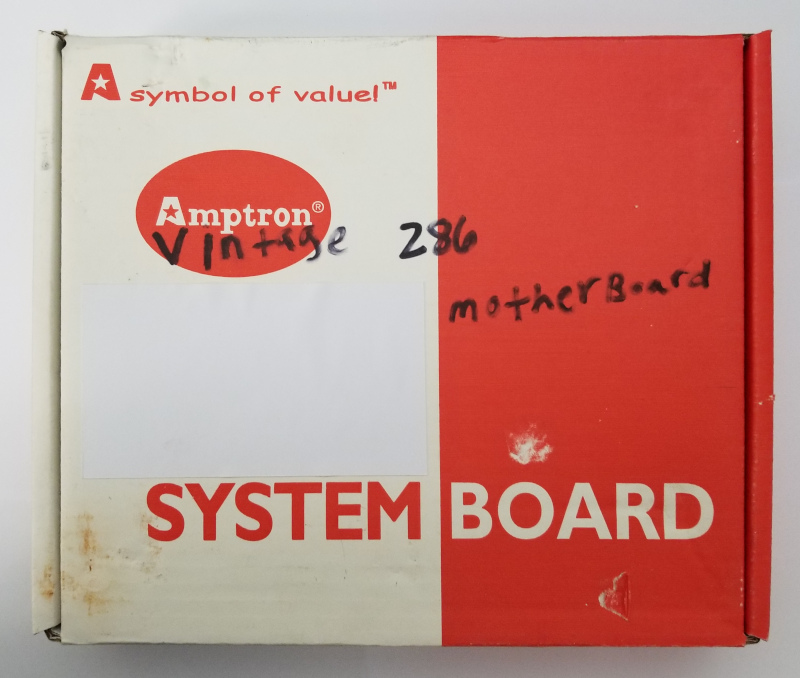 The name on the box gives partial answer to the question "Who made these motherboards back in late 1980, early 1990 ?".

Amptron International Inc. was one of the manufacturers.

I'm pretty sure Amptron was a PC Chips branding in the US.

Didn't know that.
I heard the company name, but that's it. Never owned hardware from them. At least not consciously.
There is a chance some of the old junk that passed through here is their doing ...
Searched online - only weak references came up.

If you search for PC Chips M919 you may find references to them being sold as an Amptron DX9700.

Right. Remember seeing references for it around.
Was tweaking today a proper implementation of m912 with those cool pcchips stickers.
Pcchips for everyone !

Very nice. I assume 25MHz was with 1-wait? Or did you find some SIPs that are fast enough to handle 0-wait?

I insert SIMM slots into the SIPP ones. They fit well and contraption is pretty solid.
Then roll with trusted simmsticks = 0 waits.

I insert SIMM slots into the SIPP ones. They fit well and contraption is pretty solid.
Then roll with trusted simmsticks = 0 waits.

It is a nice trick that many use.

Last weekend i went through bunch of AMD 486 DX5 CPUs as part of a slowly evolving operation aiming to clean house from hw i dont need.
PC-Chips M912 v1.7 motherboard happened to be on top of the retro hardware pile and was already configured for DX5 processors from previous tests where it behaved itself pretty well, so it was used as a test bed.

First CPU in. Run a mandatory DOOM test ... and the recorded path of the player was so incorrect that seconds after start the action was in a completely different area of the level.
Problems like that are usually attributed to tight bios timings and/or flaky L2 cache and/or flaky RAM.
This was unexpected because never had problems with this motherboard and the usual set of components i use for testing.
Spent good amount of time swapping different sets of trusted sram/ram but no luck for the day.

Next day.
Same board, same components. Plugged one of the DX5 CPUs - everything works. Hmm ...
Can this be a CPU related issue ?
Quickly went through the processors one by one and indeed - an AM486 FX5-133WBGC model (notice the W letter) didn't behave properly.
Tried it on another motherboard - all was good.
This piqued my interest.
Searched online for related info.
apparently m912 is a well known board. Several vogons threads touch on jumper settings and models with fake L2 cache.
No perf data available. No word about CPU specific issues.
Decided to examine it more thoroughly.

It is a new old stock - squeaky clean, no wear.
Despite the ugly Pc-Chips stickers hiding an UMC chipset, i like it a lot.
Late ISA/VLB model.
Supports wide range of CPUs.
72 and 30 pin SIMM slots, maximum of 128mb RAM.
Up to 1024Kb L2 cache.
Great PCB layout. All sorts of info is printed on it, but the DX5 CPU settings are wrong incorrect. 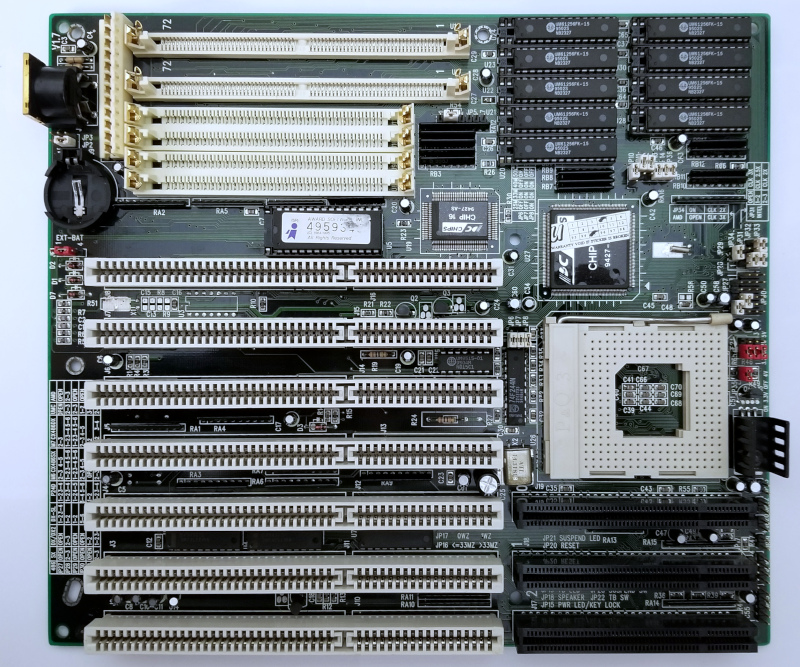 As far as i remember the original BIOS was from year 1994, stored in 256Kb EEPROM from Philips.
Replaced by 1995X code burned on 512Kb chip.

Base metrics in SpeedSys, using an ISA IDE controller.
With VLB EIDE disk i/o is in the range of 10Mb/s. 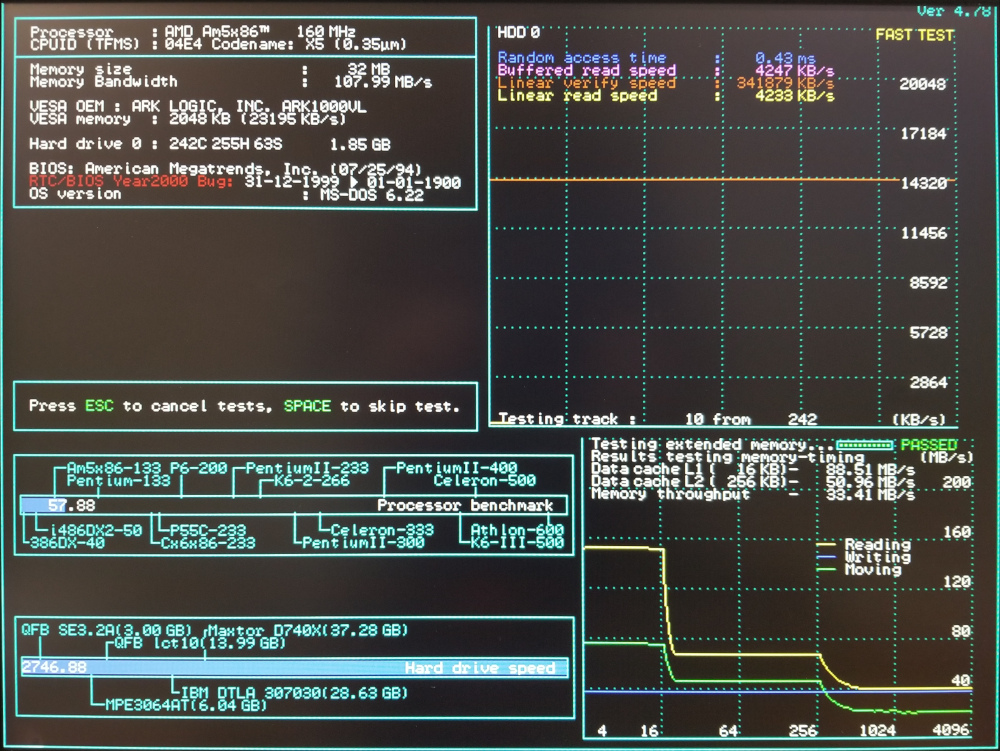 Perf testing started on a high note - all jumpers and BIOS settings on max for best performance.
Results from interactive DOS graphics benchmarks were not bad with the Ark1000VL video adapter.
Not the best out there, but pretty ok indeed.
Next up - stability/performance in complex computations and Windows.
That didn't go well.
Had to significantly increase wait states for the 3D rendering tests to complete.
At that point performance dropped to a point where i just lost interest in further testing.
So sharing the DOS graphics results only.

No issues with any of the other AMD DX5 CPU models - ADZ, ADW, VBGC.

Certainly liked the board more before examining it.